Contracts on all four major US indices, the , , and , jumped and global stocks advanced on Monday as Treasuries stabilized. The recovery indicates a return of investor confidence after last week’s bond market turmoil.

Steadying yields is the narrative for the current segment of the rally, in complete contradiction to the start of this rally, when rising yields was cited as the impetus.

Russell 2000 futures were up 1.3% at the time of writing, double the contracts on the S&P and the Dow Jones, suggesting a continued reflation trade, which is based on optimism that an will favor value stocks that underperformed during the coronavirus pandemic.

Contracts on the NASDAQ 100 were 1.5% in the green, signaling that some investors prefer the tried and tested tech sector and are less confident that the economy will recover just yet. However, as we have repeatedly pointed out recently, these are makeshift guideposts and they can turn with a gust of wind.

Case in point, stocks are said to be returning to a rally today after Treasury yields stabilized. In the last two weeks, rising yields were making investors nervous, because the leading indicator for higher rates was signaling that investors were concerned about escalating inflation and therefore a rate hike, as the economy recovers. However, in the two weeks before that, rising yields were heralded as a sign on confidence by Federal Reserve Chairman, Jerome Powell, as bond investors had been forced to park their capital in equities, due to the absence of yield in the bond market, thus boosting stocks.

We can expect more of such as investors attempt to find their footing after the seismic activity from the worst global pandemic in a century, a polarized US where a mob stormed the Capitol in early January, some eroding of confidence in the Federal Reserve’s infinite Quantitive Easing program, the worst recession since the Great Depression as well as the fastest bear and bull market in history.

Throw into the mix new age assets, such as cryptocurrencies and Tesla (NASDAQ:) shifting the market paradigm, and it is understandable why investors may struggle to find their footing, or even an available seat.

The Index, tracking stocks in 49 nations, recovered 0.5% of value, after falling to multi-week lows last Friday.

Asian indices rallied on the same theme, a steadying bond market. The MSCI’s broadest index of outside Japan rose 1.34%. Even a slowdown in China’s growth, slipping near the 50 level that separates expansion from contraction couldn’t spoil the mood. China’s gained 1.2%.

If the current theme dictates that rising yields are weighing on stocks, we can expect another selloff, as yields are on a trajectory to continue higher. Despite from Federal Reserve Chairman, Jerome Powell that interest rates will not be going higher. 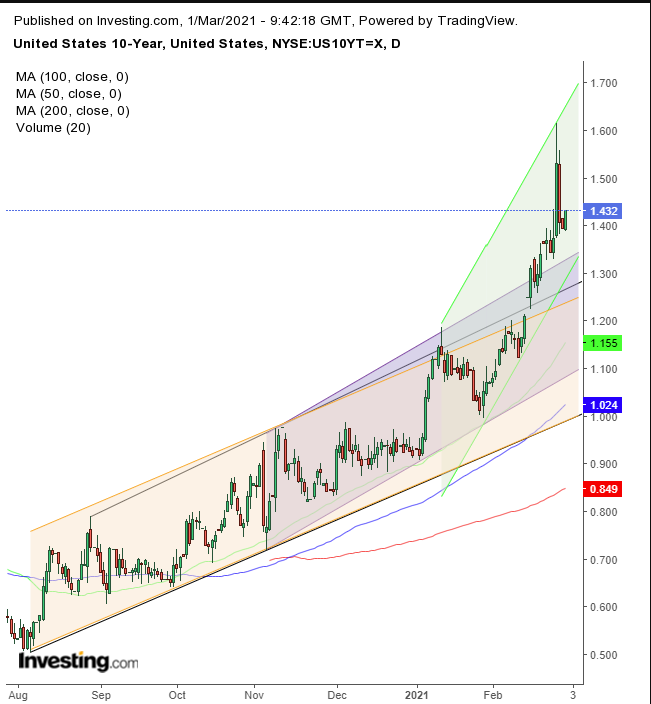 Rates, including for the benchmark found support after nearing the bottom of the third, consecutively steeper rising channel, which also has the support of the second channel top (purple).

The rose along with yields today, but it also strengthened on Thursday and Friday of last week, when yields were falling. So, the US currency appears to have decoupled from the country’s debt, for now. 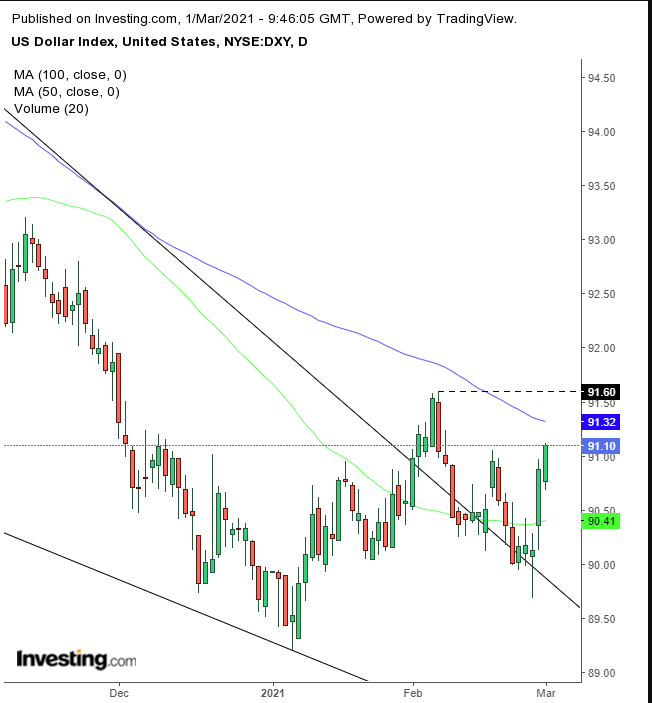 Technically, the USD found support after providing a topside breakout to a wedge since the March high. A price registered above the Feb. 5, 91.60 peak would reestablish the short-term uptrend.

rebounded despite the fact that both its major drivers—the dollar and equities—strengthened, leaving technicals as the explanation. The gold trade is currently . 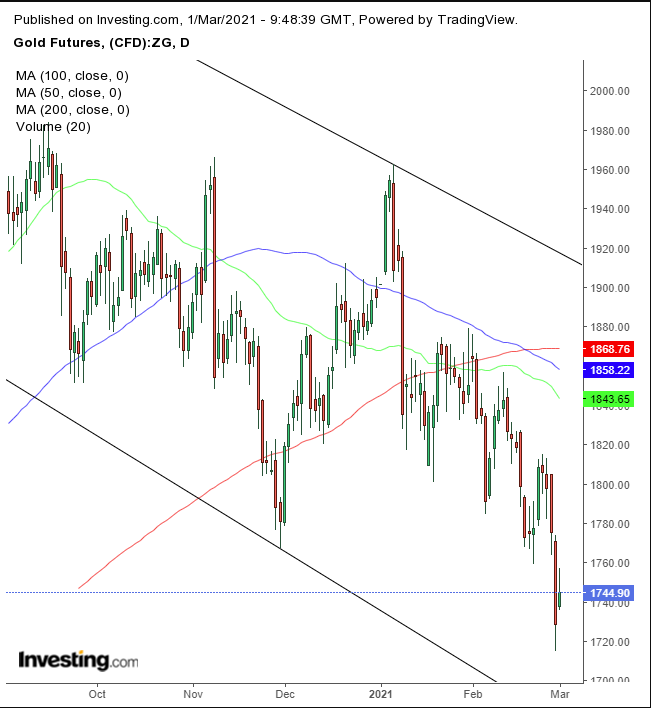 The yellow metal found support near the bottom of its falling channel. 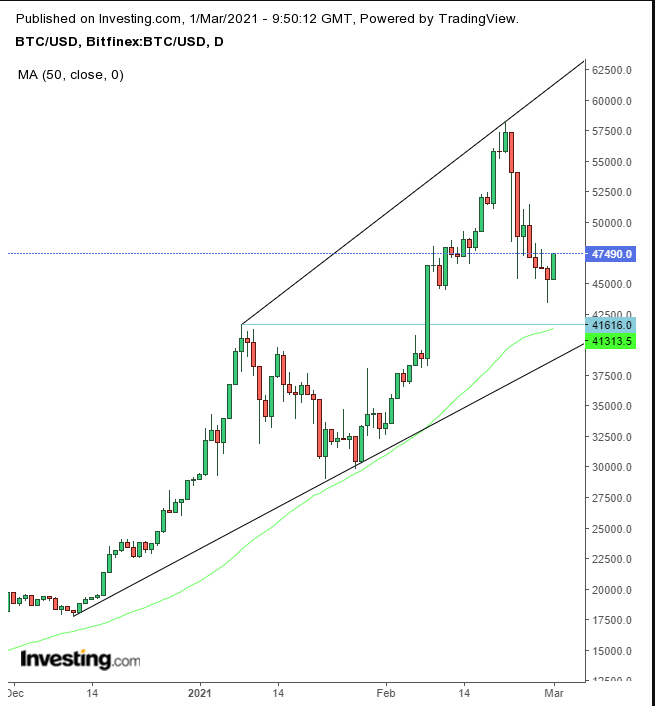 The cryptocurrency is trading at the top of the session, confirming yesterday’s hammer, having neared the 50 DMA that has joined the bottom of a rising channel.

, along with precious and base metals jumped despite the strengthening dollar, showing how excited investors are to buy anything after the demonized yield eased.