European stocks also climbed, extending their rally on the view that reopening economies, boosted by the US stimulus, will provide the conditions for robust growth.

Three out of four US markets were higher on Friday with the Dow and posting the best performance as a return to business is expected to benefit domestic American firms the most.

In Europe, the Index advanced for the fifth out of six days, after its strongest week since mid-November, to less than 2% from its pre-COVID, February 2020 all-time high. So far, the pan-European benchmark has gained 7% since the start of the year. It is riding a set of conditions that are ideal for a strong economic recovery: lifted coronavirus restrictions and administered vaccines as well as the massive US stimulus which is expected to boost the recovery there.

We have discussed the cyclical rotation in lots of recent posts. The outlook for reopening economies is manifested in the trade as European travel and automakers —two obvious sectors for an open economy—outperformed. Goldman Sachs has pointed out that European value stocks have outperformed growth stocks by 15% since October, and they have said that value stocks will likely continue to gain—by another 19%—at the expense of growth stocks.

French food and beverage giant, Danone (PA:) jumped 5% after ousting chairman and CEO, Emmanuel Faber, a move shareholders have been demanding for months in order for the company to increase its returns. 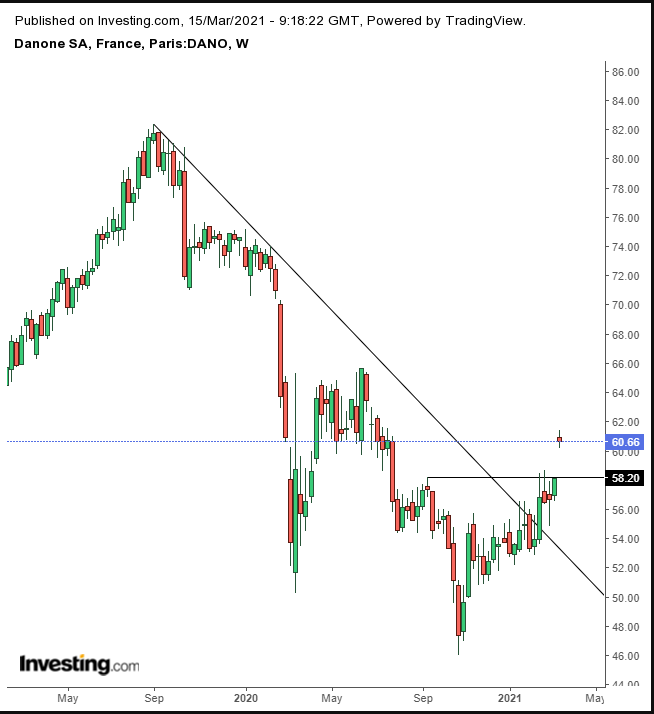 The stock unflinchingly bottomed out, with a breakaway gap.

Flutter Entertainment (LON:) jumped 6% to a record after it announced it was considering a US IPO for a “small share” of its sports-betting and daily fantasy site FanDuel.

Hennes & Mauritz’s (ST:) stock gained 2% after the clothing retailer revealed sales in the first two weeks of March surged 10% as stores in Germany, its largest market, reopened. The stay-at-home environment saw consumers focusing on home office and entertainment, but now they are spending on items related to returning to a social life. 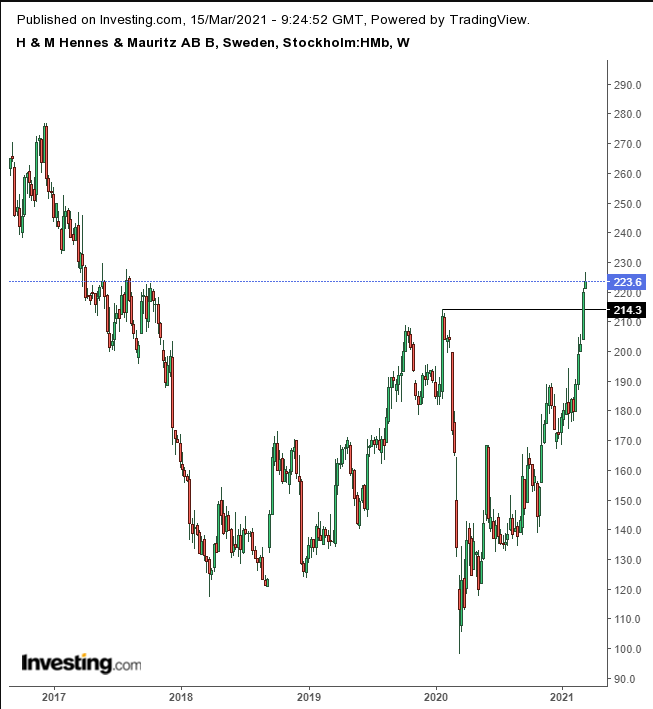 The stock extended a long-term uptrend.

Asian gauges were mixed, as Chinese data painted a mixed picture of its recovery. Having led the global recovery by reopening its economy before anyone else, China has been paramount in the rest of the world’s rise out of the ashes. So far, the world hasn’t been affected by China’s data.

jumped nearly 36% year-on-year in January-February from a year earlier. The surge was mostly driven by strong demand for cars, catering and jewelry, suggesting Chinese consumers were splashing out during the Lunar New Year according to ING economists in a report.

The data were exaggerated as it was coming of a low base as a result of last year’s shutdowns.

Meanwhile, the rose to 5.5% from 5.2% a year earlier, possibly affected by flare ups of coronavirus in some areas, analysts said.

US stocks have gained for two weeks, to a fresh record, but not without a wild ride amid fears that rising yields will slowdown the recovery. Like in Europe, the reflation trade has seen . Yields on the Treasury note edged lower. 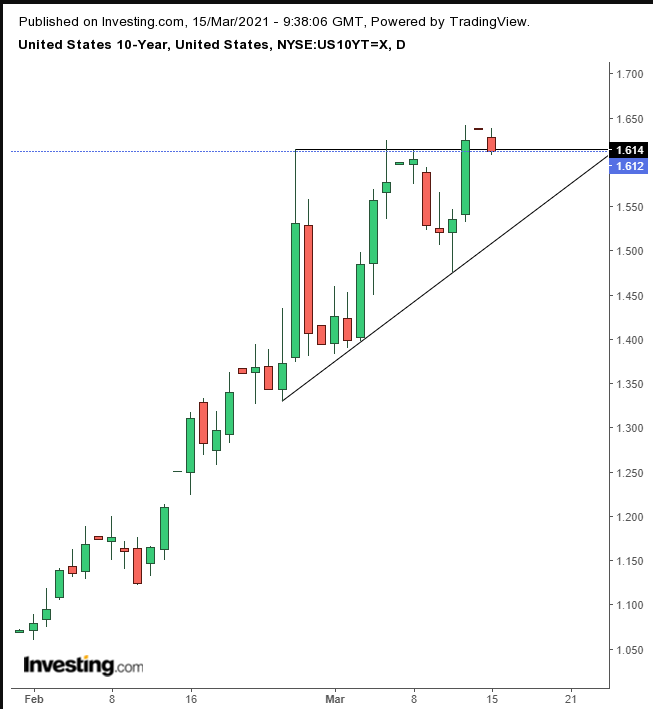 But at least for now they found support above an ascending triangle, predicting only higher rates.

The was volatile but managed to hold on to gains for the second day. 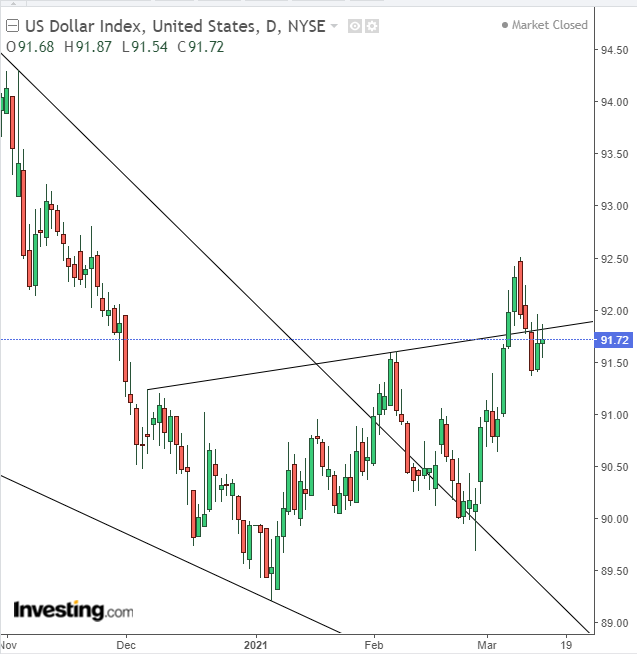 The greenback is struggling with the neckline of a double bottom, after having completed a falling wedge since the March top.

extended a rally from the bottom of its falling channel. 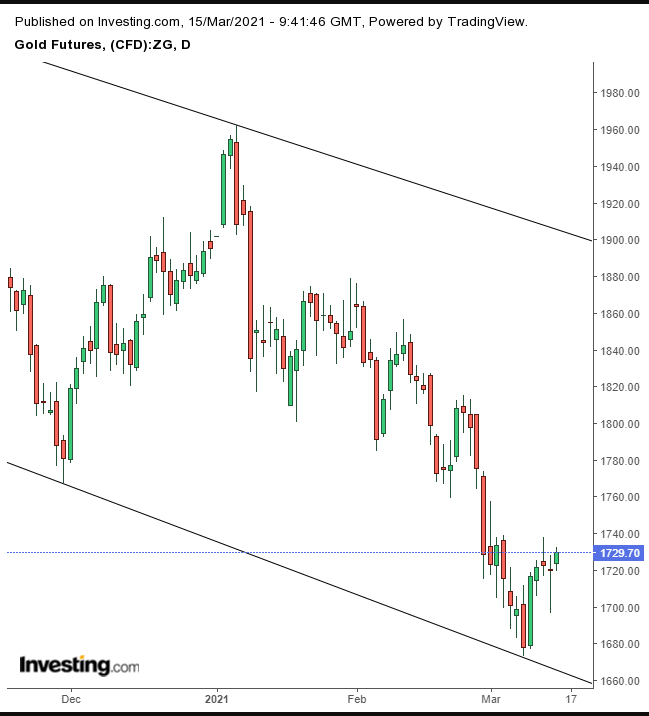 This means the impetus is always to be expected to the downside, even within a temporary upward correction.

is falling for the second straight day—including Sunday—toward $55,000, even after nearing the $61,500 level. 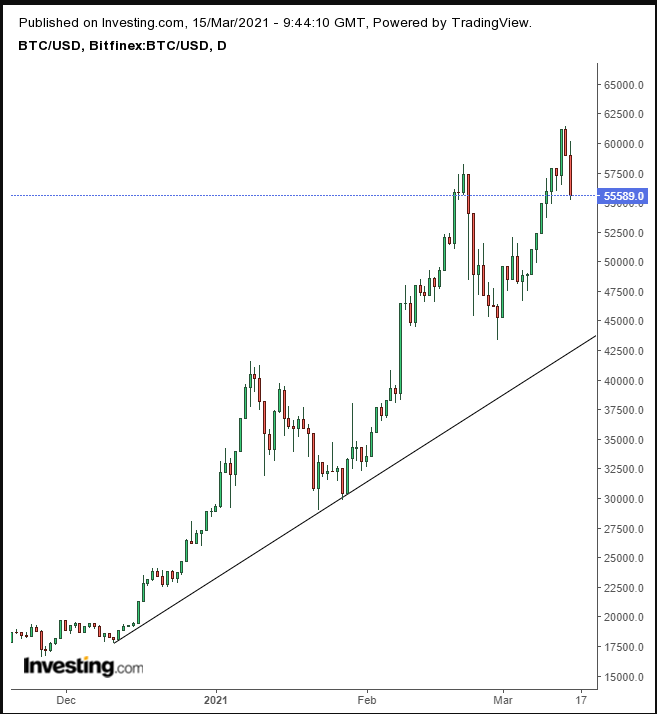 We’d consider a return to at least its most recent uptrend line as healthy for a sustainable uptrend.