US futures on the , , and ignored the global downtrend on Wednesday amid a troubling resurgence of the coronavirus pandemic and new or extended lockdowns in Europe.

Bitcoin advanced while the dollar wavered

NASDAQ futures are leading as investors rotate back into growth stocks, predominantly in the technology sector which outperforms during the stay-at-home environment. Contracts on the S&P 500 rebounded from a selloff overnight. 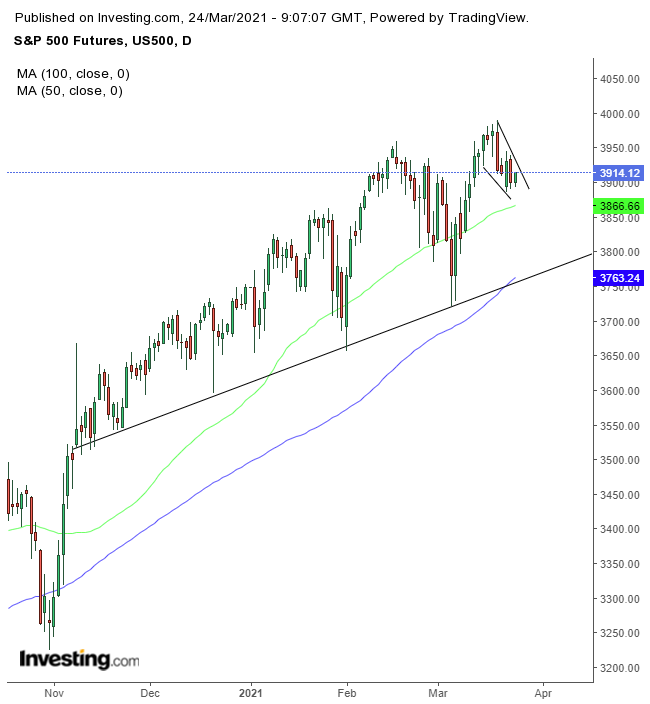 US markets were spooked by leaked details of President Joseph Biden’s proposed tax hikes that will be required to pay for his proposed $3 trillion infrastructure and jobs stimulus.

Trading resumed along a falling flag, bullish after the 7% surge within the nine days that preceded the profit-taking range. A topside breakout would signal a resumption of that uptrend, taking the past the 4,000 mark for the first time.

Conversely, a fall below 3,800 might signal a top. The 50 DMA lends support to the flag, while the 100 DMA to the trendline that may be the technical “line in the sand.”

On the other hand, in Europe, the index declined on a compound crisis in the region—rising case numbers of COVID-19 and a vaccine distribution debacle. The EU is currently proposing new emergency laws to allow it to block exports of vaccines to facilitate its own citizens’ inoculations. This political nightmare—smack in the middle of another virus resurgence—has brought the pan-European benchmark to a two-week low. 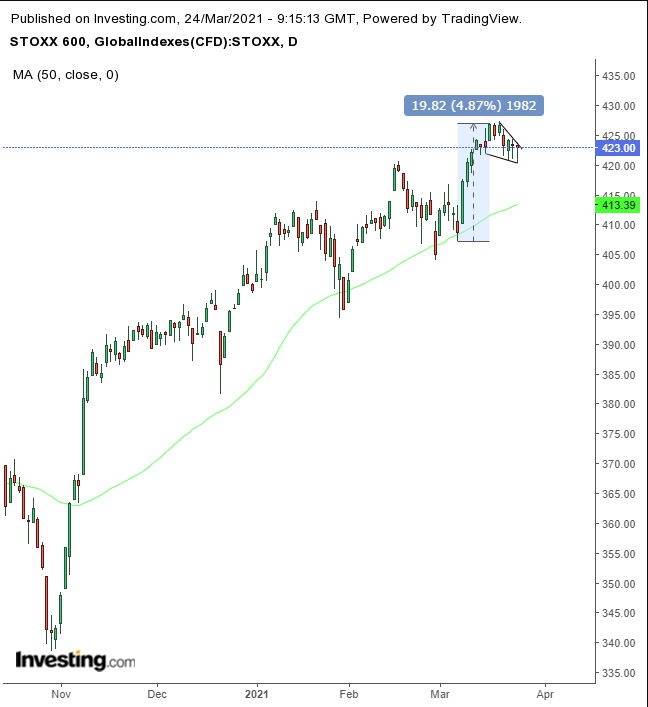 Nevertheless, the index rebounded from the bottom of a falling flag, producing a hammer. The price is finding resistance by the top of what is expected to be a continuation pattern, bullish after the near-5% jump within the eight sessions that preceded the impasse, as the index finds new takers while those who enjoyed the ride cash out.

The MSCI’s  of Asia-Pacific shares outside of Japan fell 1.3% after losing 0.9% on Tuesday. It went as low as 674.18 points, a level last seen on Mar. 9. The index fell this month, following a five-month gain, as the inflation scenario provoked investors to sell.

In US trading on Tuesday, stocks fell, led by value stocks, which benefit from a reopening economy, as the rising number of virus cases across Europe as well as the extension of social restrictions in Germany deflated expectations of a return to normalcy.

The plunged 3.5% during the session as beneficiaries of the reopening trade including Carnival Corporation (NYSE:) and TripAdvisor (NASDAQ:) tumbled. An index of airline shares fell the most since October.

Yields on the Treasury note have rebounded to a slight gain, though indicators suggest they could head lower despite . 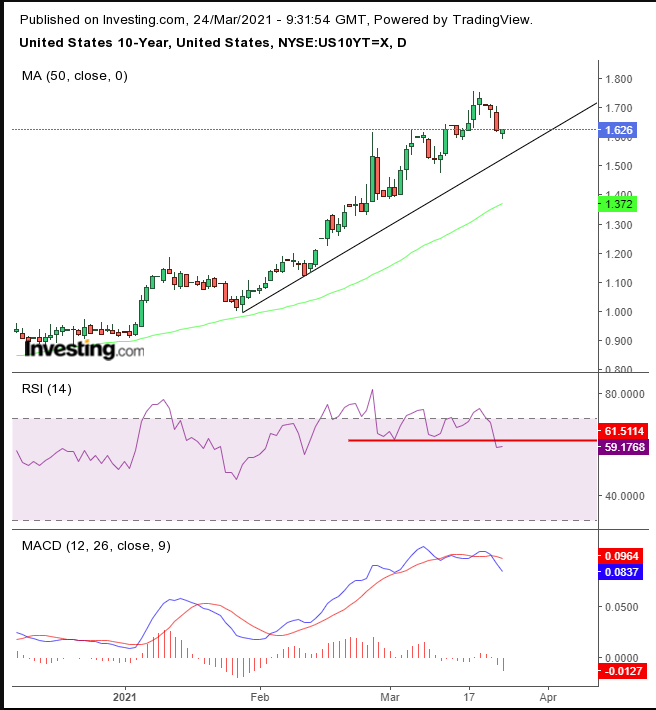 They are still well above their uptrend line since the Jan. 28 low. The yield rebound—during the research for this article—pushed the small cap-Russell 2000 contract to equal the advance of contracts on the NASDAQ 100, clearly illustrating the direct link between yields and the reflation trade.

The was struggling, alongside yields, to pick a direction. 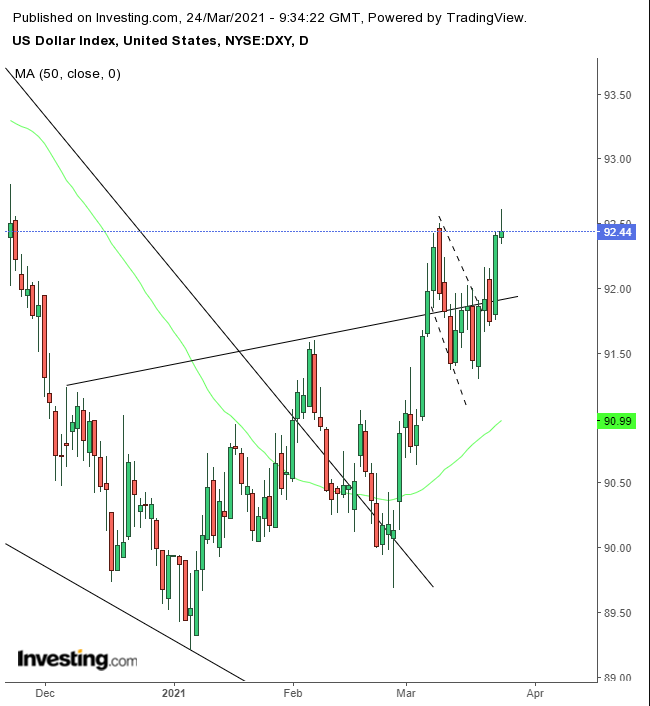 The greenback completed a bullish flag that confirmed a double bottom, which rose out of a falling wedge since the March high. 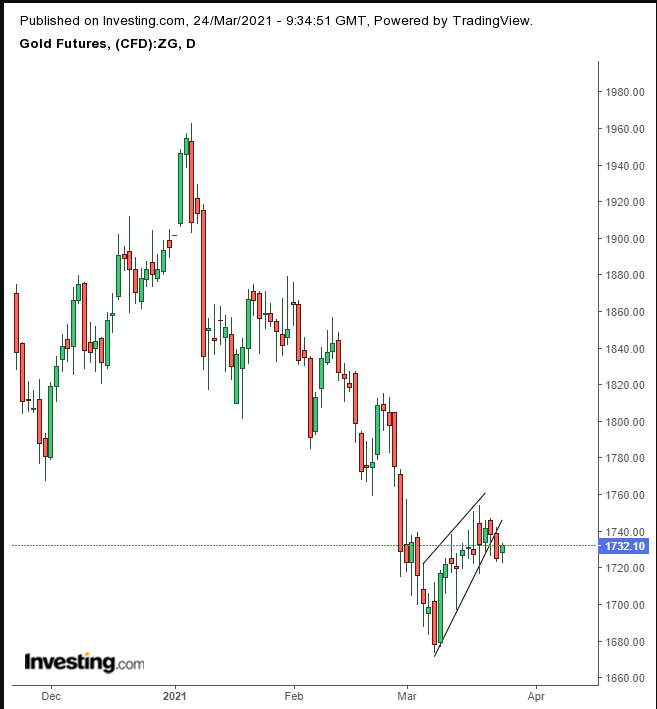 However, in mirror image to the dollar, the yellow metal already completed a bearish flag.

received a boost after Tesla (NASDAQ:) CEO Elon Musk that the company will now accept Bitcoin as a method of payment, negating  from Federal Reserve Chair Powell that the cryptocurrency is replacement for gold rather than the dollar. 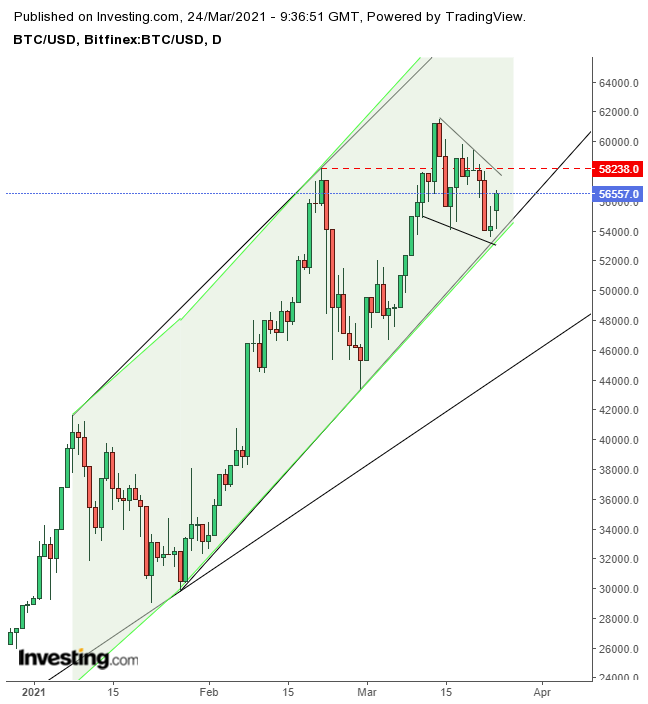 The cryptocurrency jumped, after reaching the bottom of its rising channel, toward the top of a falling flag, bullish after the preceding jump.

found support by the neckline of a H&S top but on demand worries which continue to be a cause of concern for OPEC+. 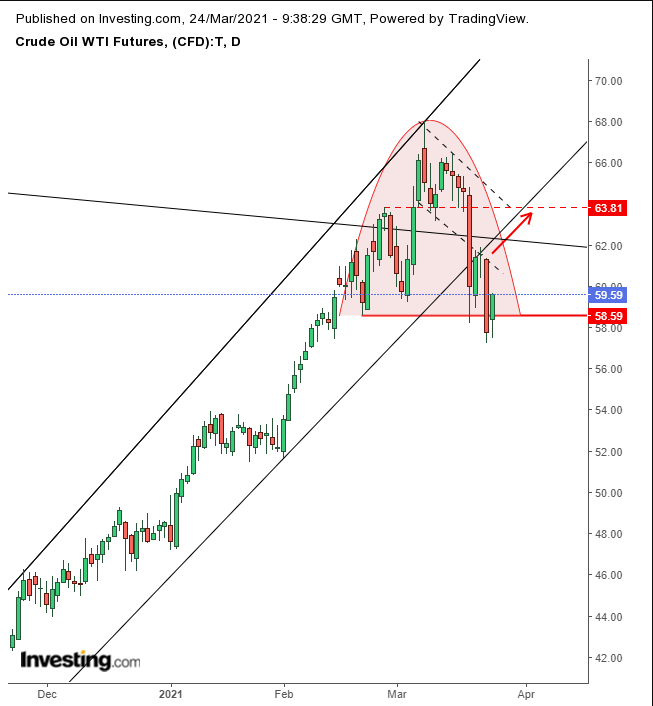 The technicals allow the commodity to rise toward $64 and still be captured by its bearish implications.