US futures for the , , and all opened higher on Monday and continue to trade in the green along with Asian stocks after Friday’s muscular US jobs report blew past expectations. The benchmarks are tracking Treasury yields higher this morning as well.

Crude oil and gold are both lower.

Contracts on the S&P 500 built on Friday’s strong release as well as Thursday’s record high close for the , after it surpassed 4,000 for the first time. Along with a shrinking , the report revealed 916,000 new jobs were created in March, the most in seven months.

However, futures on the Russell 2000—where domestic, American small cap firms are listed—are outperforming significantly today, while the tech-heavy NASDAQ 100 futures are comparatively flat, demonstrating faith in an end to lockdowns. That would of course favor value stocks rather than growth-oriented shares, which benefited from pandemic and its restrictions.

Fiscal stimulus remains in focus, after a report on Saturday noted that 60 members of Congress appealed to the Biden Administration to increase already unprecedented spending. The legislators want to add a fourth round of financial aid that would provide another check for Americans, offering “recurring direct payments and automatic unemployment insurance extensions tied to economic conditions in your Build Back Better long-term economic plan.”

While we question the long-term economic impact of all this, we expect the excitement of a reopening economy backed by unprecedentated monetary stimulus to prop up the market, or, depending on who you ask, further inflating an ever-expanding bubble. We have long warned that the miraculous rally that followed the March bottom seems to us to be too good to be true.

Having said that, the fear of missing out has the potential to keep driving markets, until a crisis could pierce what we have long considered the delusion of an alternate, extremely healthy economy, fostered by irrational monetary policy. Nevertheless, there are qualified economists who do support these measures, not the least those that are Federal Reserve members and administrations.

Notwithstanding, we’re following momentum . However, we remain cautious and ready to act. Still, barring a black swan event, we don’t anticipate a market downturn over the next few months.

Treasury yields, including for the note, struggled, adding to the second day of the bond rally. 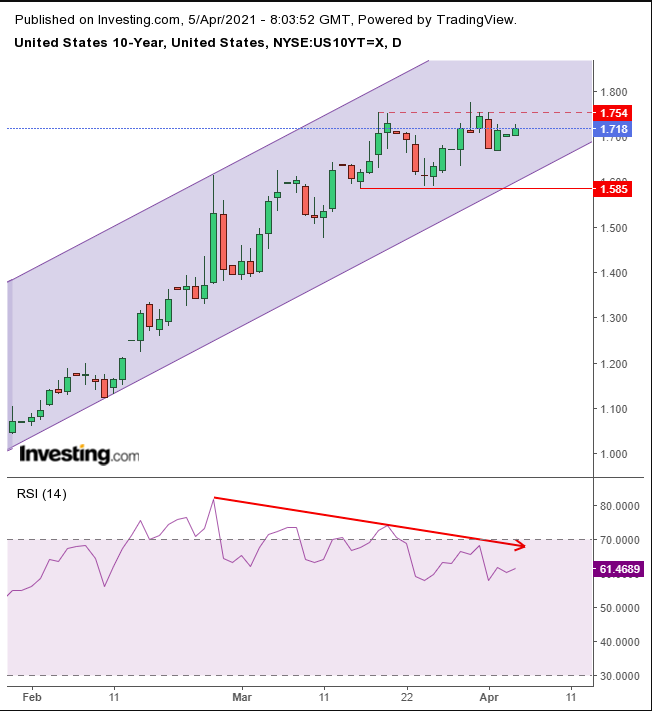 Rates have been moving within a rising channel but their inability to cross over the 1.75% level puts them on the chopping block for a possible top, based on the falling momentum in the RSI portrays. However, as long yields still remain within the channel, their trajectory is up.

After being dollar-bearish since the March 2020 peak, we provided a bullish call , despite the fundamental argument for continued decline (which may still, in fact, take place).

Goldman Sachs has now joined our point of view. In October, the bank’s short recommendation and paired our technicals-based short call to theirs, but now Goldman closed its short position, at least for the moment. 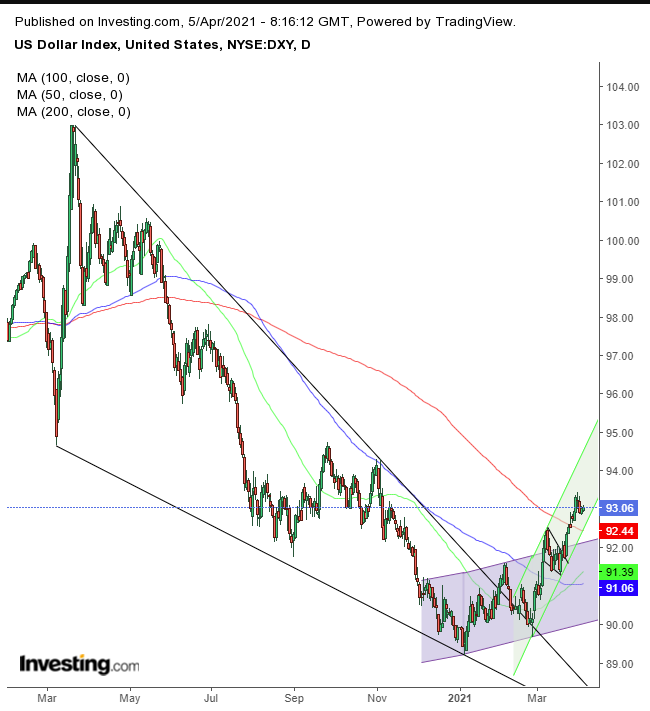 The price crossed the 200 DMA on Mar. 25, for the first time since it fell below it on May 28. The 50 DMA crossed above the 100 DMA at the same time, showing a continuous long-term reversal. The price is trading within a rising channel, after having completed a massive falling wedge from the March peak. Should it follow through to its technical conclusion, the dollar could retest those levels, around 100.

If the dollar does continue higher, that could weigh heavily on . 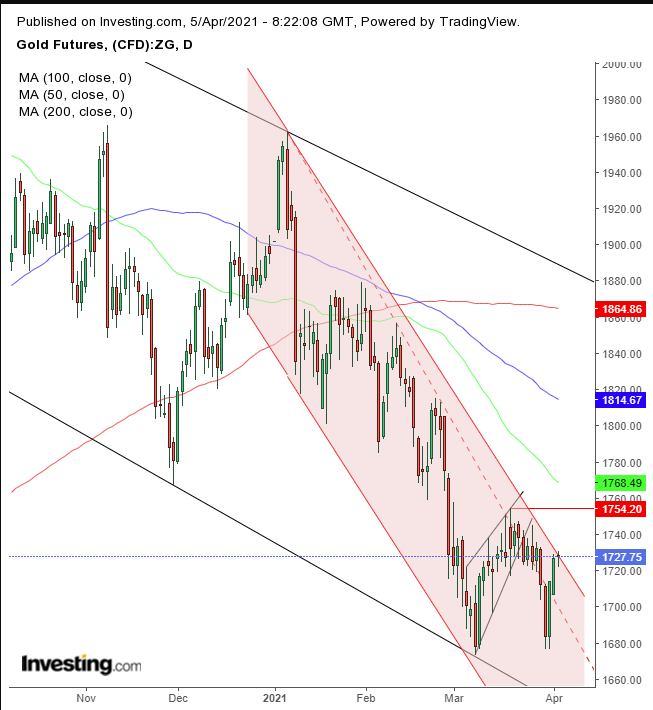 Unlike for gold, we foresee rising because of its industrial uses amid an economic recovery, along with the reflation trade, particularly because of President Biden’s green initiative. 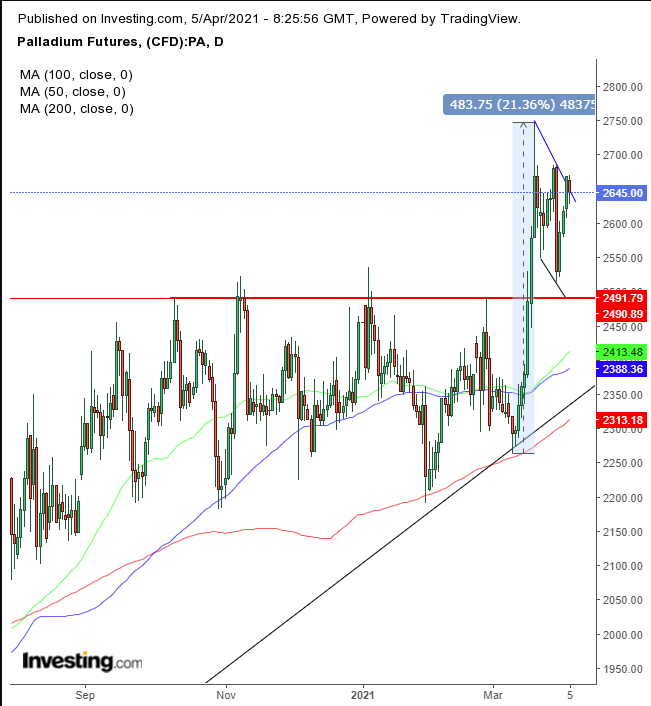 Palladium may be on the verge of completing a falling flag, bullish after the 21% surge within just seven days, the longest winning streak since mid-2019. The price is likely to make new highs and even surpass the $3,000 per ounce mark, for the first time.

fell toward $60 after OPEC+ added output, betting the market will handle additional inventory. We disagree, based on shifts in the balance of supply and demand, as seen on the chart. 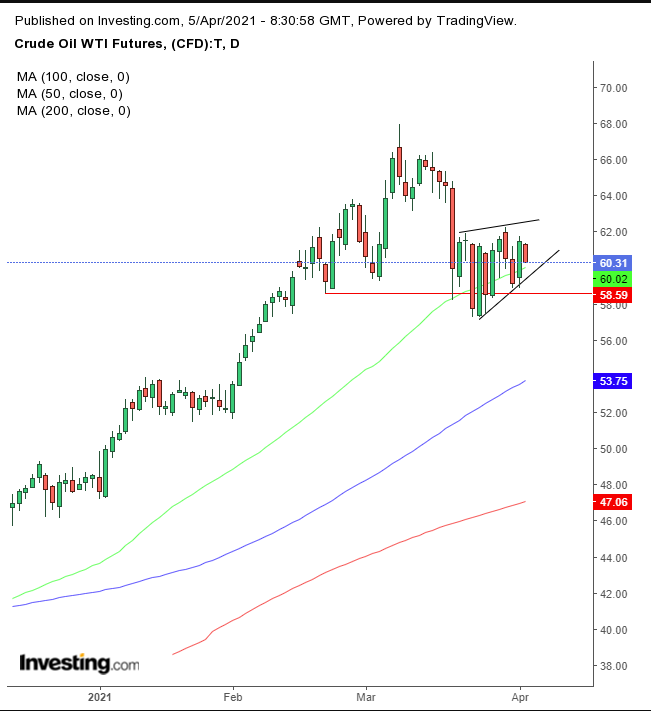 Crude is trading along a rising channel, bearish after the 7.5% plunge in a single day that preceded the range. A downside breakout would also complete a second pattern, a H&S top.