On Tuesday, US futures, including for the , , and , rebounded after underlying gauges retreated from record highs on Monday in the worst equity selloff in a week. European stocks were up this morning after their worst decline in a month. Earlier today, Asian stocks were boosted by strong economic data, particularly from the region’s biggest economy, China.

Gold recovered but remains under pressure and the dollar is trading lower.

In Europe, automakers and mining companies pushed the Index to a higher open.

Asia was green across the digital board after factory activity in some of North Asia’s largest export-led economies jumped in November along with China’s recovery.

South Korea’s extended last month’s growth above the expansion-mark to 52.9 from 51.2, attaining the highest reading since February 2011. edged toward positive territory, showing a 49 reading, from 48.7, its highest result since August 2019.

But the strongest reading came from China. Its of 54.9, showed activity soared to the highest in a decade. A second PMI gauge, the government’s official rose to 52.1, its highest in three years, according to the National Bureau of Statistics. While economists anticipate that China’s recovery will hold through the winter, they expect that exports will drop as and Europe dent demand.

US stocks receded on Monday during the Wall Street session as investors took profits at the end of since April—when stocks exited a bear market in record time—even after the worst drop in a week on Friday. Prior to Friday, global stocks and US small caps enjoyed the biggest jump in their respective histories. The declines took place amid a reversal in the cyclical rotation from stocks that benefitted from lockdowns and those that underperformed.

To that effect, the hit a new all-time high, although the , which includes the mega tech stocks, did not. 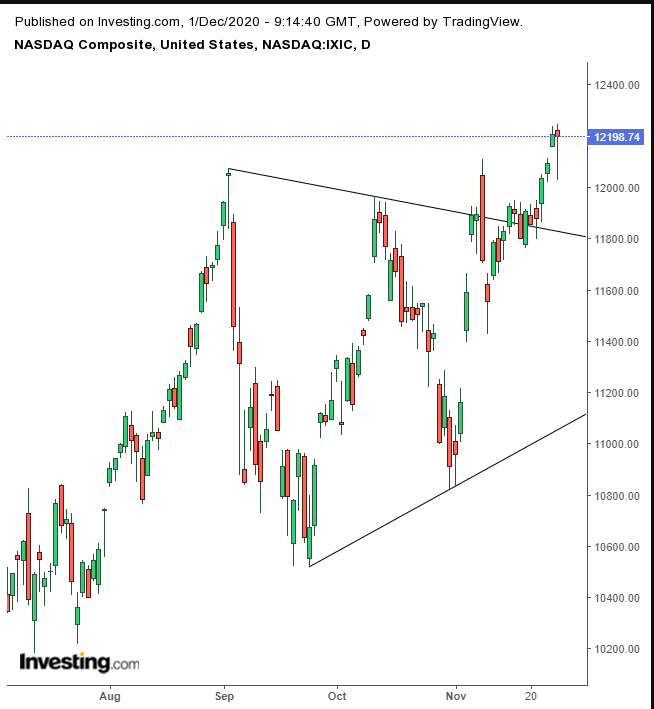 From a technical perspective, the NASDAQ Composite’s hanging man suggests a possible return-move to a symmetrical triangle, before the index breaks new ground.

Yields on the Treasury note rebounded from a gradual, , 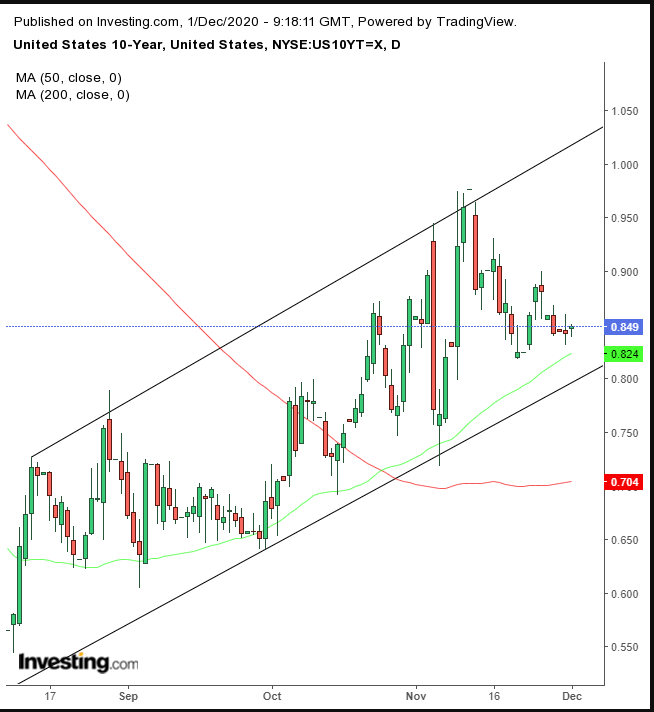 Treasury yields had found support by the 50 DMA, which has been tracing the bottom of a rising channel as it crossed above the 200 DMA in late-October, triggering a golden cross, suggesting yields will continue to climb, as investors rotate into stocks.

Falling yields weighed on the . 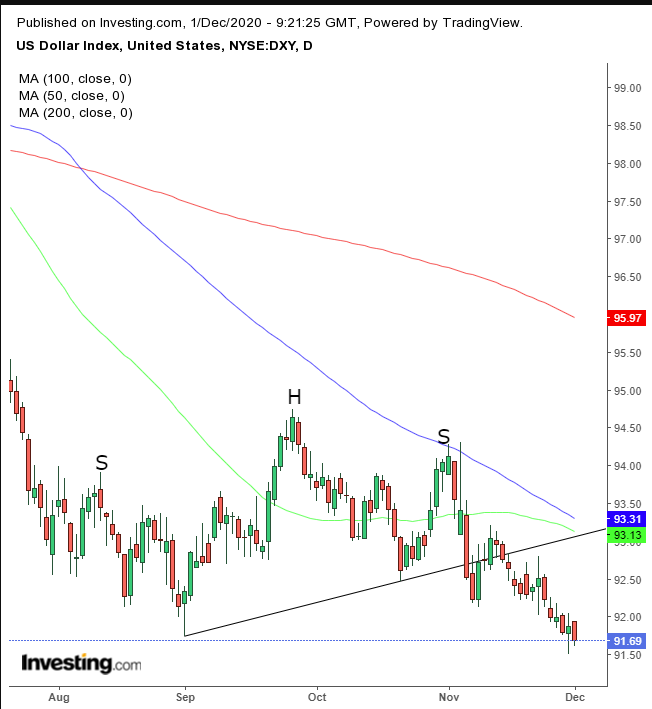 The greenback is retesting its lowest level since Apr. 27, 2018—after completing a H&S continuation pattern as the global reserve currency resumes its downtrend.

finally responded to the USD weakness, but likely too little too late. in four years—over the course of the month it dropped 7%. 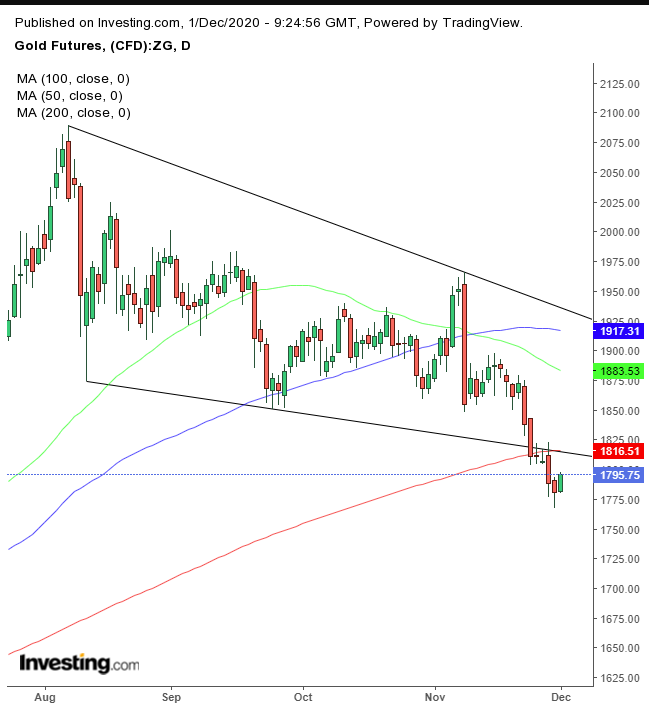 The yellow metal has already blown out a falling wedge and crossed below the 200 DMA, making an advance an uphill battle rife with resistance.

, on the other hand, surged 8.4%, rising for the third day and posting a total gain of 14.9%, after the rout during the pandemic pushed the digital currency leader to the lows of $4,000. It’s currently trading at $19,321 at time of writing.

On Monday, the cryptocurrency notched a new record at $19,864, for the first time since Dec. 16, 2017. This miraculous recovery has investors torn between investing in gold, which has been failing to rise either on dollar weakness or on its haven status, and what’s sometimes referred to as ‘digital gold.’ Investors are taking greater note of cryptocurrencies as a valid form of investment to include within their portfolios.

rebounded from a fall after continued bickering among OPEC+ members about output amid divergent interests has resulted in the delay of an official meeting. A measure of oil trader positions shows a record number of shorts on , 470,000 according to ICE Futures Europe data, yet we’re betting that WTI will shoot higher, though we await one more technical signal. 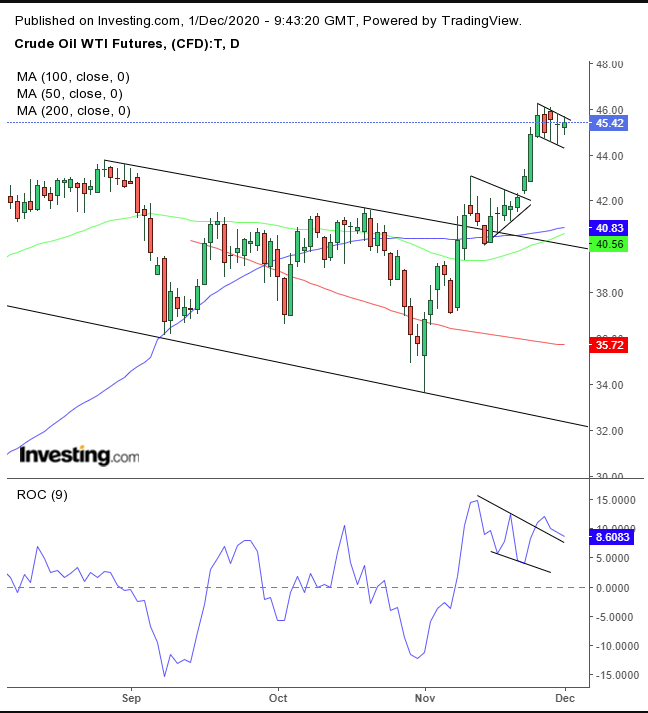 Oil has broken out of a falling channel and formed a pennant, whose upside breakout is now developing a bearish flag, bullish after the 9.5% surge in just 3 days. Another upside breakout will signal an additional such move. The momentum-based ROC signals this sort of completion.