Futures on the , , and , as well as European stocks were flat on Wednesday, as yields struggled to maintain upward mobility. Investors are awaiting for specific details on the Biden Administration’s infrastructure spending plan later today.

The dollar was set to lock in its best quarter in a year.

Shares in Europe edged higher in pre-US market trading, building on Tuesday’s gains, pushing the Index within approximately 0.75% of its all-time high. At this level, the pan-European benchmark would achieve 6.5% gains for the month, and an 8.1% advance for the quarter.

Most of Asia closed in the red due to the concerning discovery of new coronavirus cases in Myanmar, causing China to close a border bridge and impose a one-week lockdown in the border city of Ruili. The news overshadowed a robust economic recovery in China— was 51.9 showing that the sector has been in expansionary territory for 13 consecutive months.

The world’s second largest economy’s factory activity in March bounced from a three-month slump, returning to expansion territory. All in all, China manufacturing recovered its pre-COVID levels.

Australia’s was the only regional gauge in the green, capping its best month since November, thanks to the robust factory data in China, its most important two-way trading partner. Perhaps, the geographic distance from the new cluster of virus cases shielded investors’ confidence.

On Tuesday, during the Wall Street session, US stocks closed lower for the second day and yields sharply retreated from a new 14-month high, as the market attempted to foresee the effects of additional economic stimulus from the infrastructure spending plan. The shed 0.3% of value, though it was difficult to find a consistent pattern across sectors. Consumer Staples (-1.1%) and Utilities (-0.1%) underperformed, after outperforming on Monday, for the first time in memory. While Consumer Discretionary rallied 1%, helping to shield the index from a sharper selloff.

Financials gained 0.7%, recovering from Monday’s selloff on concerns about a forced liquidation of a significant block trade by Archegos Capital Management which was holding an overleveraged position that was hit with a margin call it could not meet. This is an important lesson for traders who fail to cut their losses in trades, instead relying on the irrational expectation that the situation will turn around. The reality from this debacle is clear: worse losses then imagined and even financial ruin.

The S&P 500’s decline is part of a technical pattern. 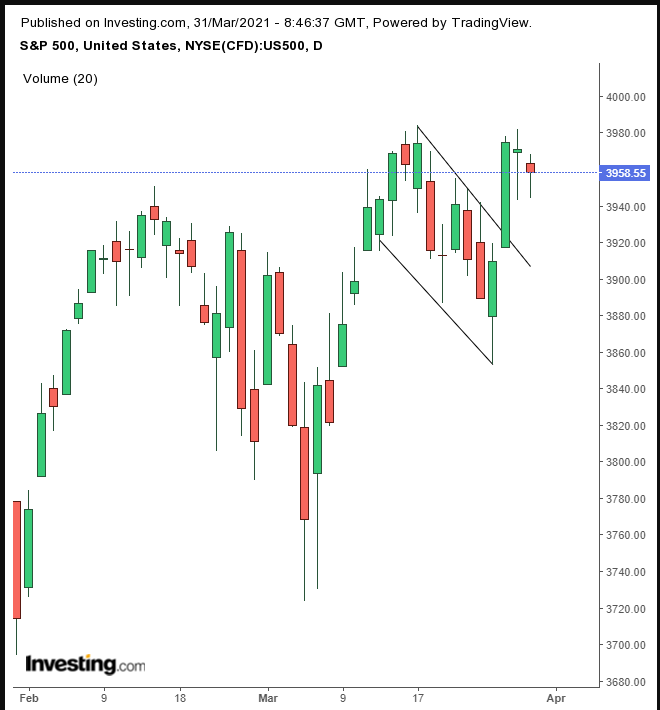 After completing a falling, bullish flag, the pattern often retraces its steps, before continuing higher.

Yields on the Treasury note, which have been one of the main drivers of equity markets, were struggling to keep their current leg in the rally—a mirror image of a slowdown in the Treasury selloff. Yields retreated from the 1.75% level, having fallen back from 1.77% yesterday for the first time since January 2020.

On Tuesday, yields produced a shooting star, confirming the previous high posted on Mar. 10 as a resistance level. Both the MCD and the ROC are bearish. Nevertheless, if yields remain within the steeper rising channel it’s considered in an uptrend.

The retreated from its highest level since early November. 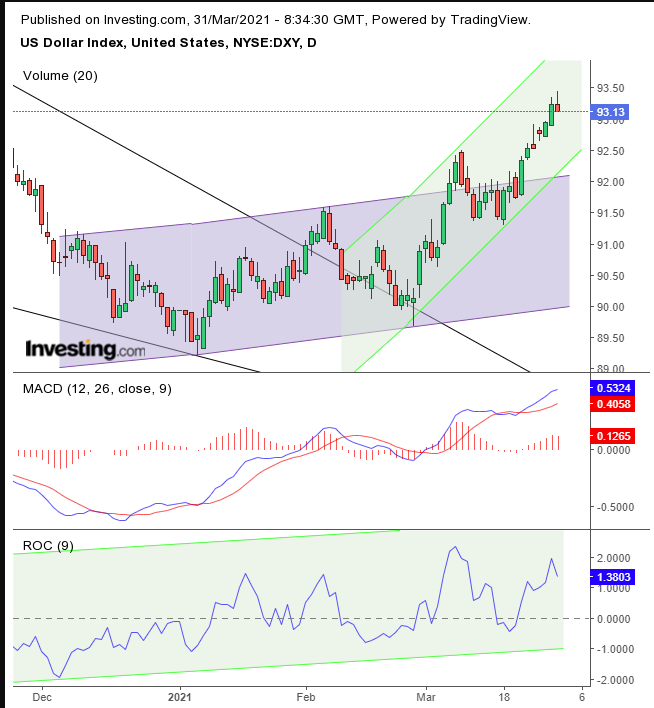 If the price closes at its current level, it will have produced a shooting star, which would signal a potential retracement to the bottom of its current rising channel, after having completed a massive falling wedge in February, since the March 2020 peak, a level the global reserve currency appears to be returning to right now.

was flat, bearish in its inability to capitalize on dollar weakness. 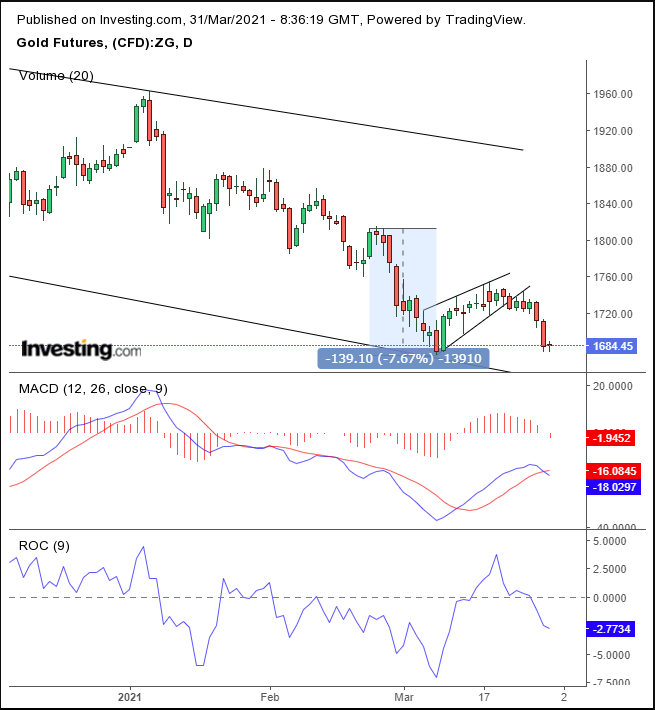 Following a downside breakout of a rising flag, the price is signaling a steeper decline from its current trajectory in its falling channel.

pared most of Tuesday’s gains, providing a heads up to a possible return-move to a bullish flag. 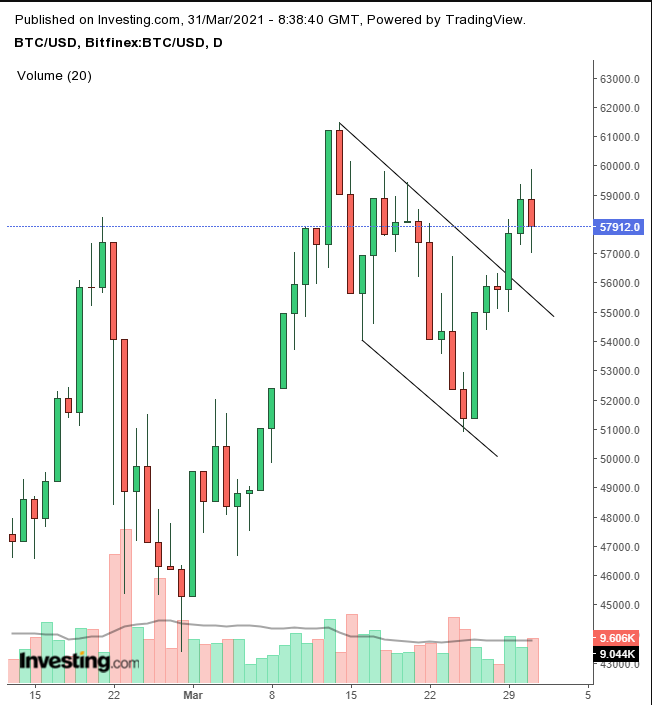 If the price does dip, we expect it to bounce off the flag, and we’d like to see that happening on high volume, to demonstrate that the move is representative, backed up with broad participation.

was flat, having trimmed an advance, after yesterday’s selloff on the news that OPEC+ revised down oil-demand estimates before its  on Thursday to decide on production levels. 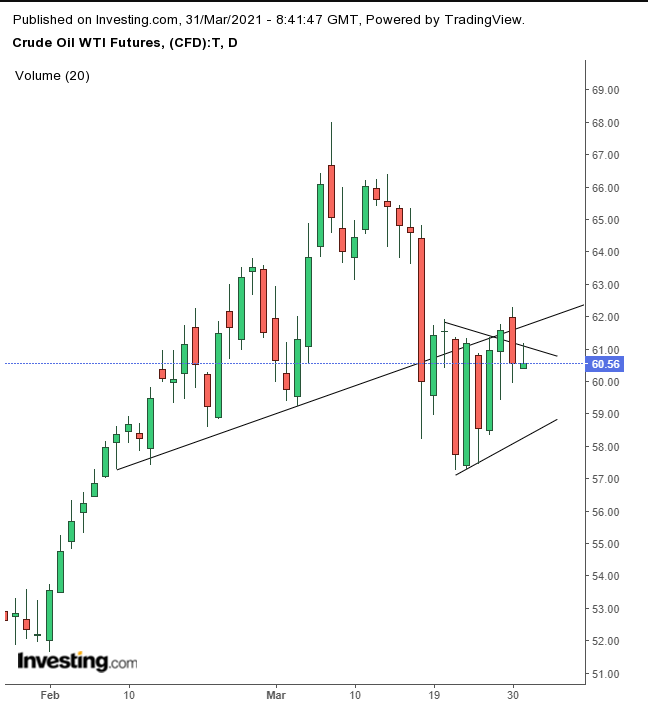 The price on Tuesday fell back into the pennant which is presumed bearish—complete upon a downside breakout—following the preceding sharp selloff.