Contracts on the , and were up Thursday while futures were headed lower, suggesting further declines when Wall Street opens. The dip comes after the tech benchmark posted its biggest selloff in a month on Wednesday during US trade, falling 1.94%.

The tech sector is loosing capital to value stocks as investors continue to rotate into companies that will benefit from a post-pandemic economic recovery.

Although the US Federal Trade Commission launched an antitrust lawsuit against Facebook (NASDAQ:) on Wednesday, causing its shares to drop 1.93%, it is the cyclical rotation out of tech that drove the ‘s slump. Facebook’s weighting on the index is only 4.163%.

The antitrust lawsuit the giant social media platform as a monopoly and threatens to dismantle the Facebook empire. It alleges that the purchase of Instagram and WhatsApp has enabled it to put smaller competitors out of business. 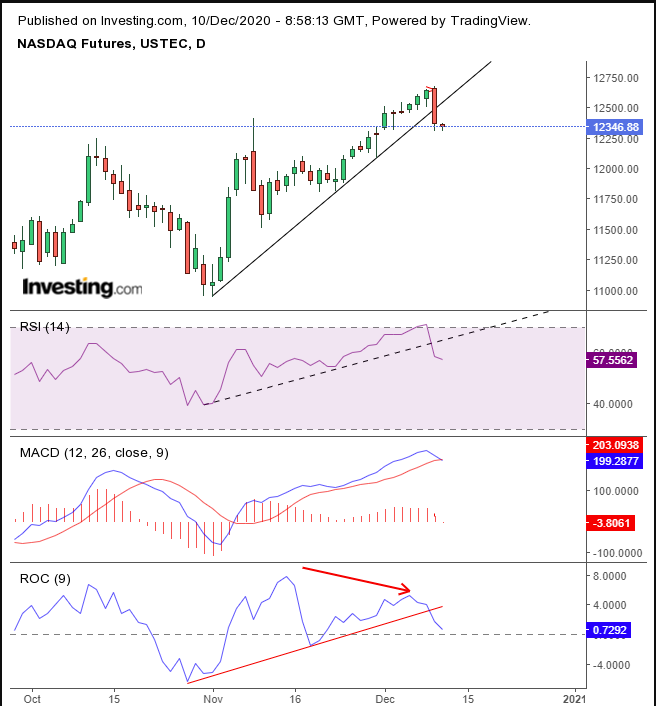 We’re witnessing rising pressure on stocks as investors appear to be losing patience with US lawmakers who can’t seem to close a deal on additional fiscal aid, while coronavirus cases and deaths continue to increase across the country.

Pfizer’s (NYSE:) UK vaccine launch hit a snag when two individuals with allergies suffered adverse reactions. The British government is now warning those with severe allergies against the immunization. Pfizer also suffered a , in which vaccine data was stolen.

In European trading on Thursday, the Index whipsawed between gains and losses, and was slightly up at the time of writing, with a technology selloff offsetting gains by food and chemicals.

The fell for the fourth day out of five after a dinner between UK Prime Minister Boris Johnson and European Commission President Ursula von der Leyen wasn’t followed by a Brexit deal for dessert. The , on the other hand, opened higher, perhaps on pound weakness. It’s noteworthy, however, that the leading UK stock index is climbing for the eighth straight session, which included days with pound-strength.

The pushed higher, snapping a four-day losing streak, ahead of the ECB . The European central bank is expected to announce that it is increasing its emergency bond-buying program—pumping more cheap cash into the economy, otherwise known as quantitative easing (QE)—by 500 billion euros (US$605 billion). Of interest, while the invariably weakened upon expectation of further US stimulus—as a greater supply devalues the currency—the single currency is rising for the first time this week on that very theme, at least according to the market narrative.

We see a struggle in the between supply and demand on the technical chart. 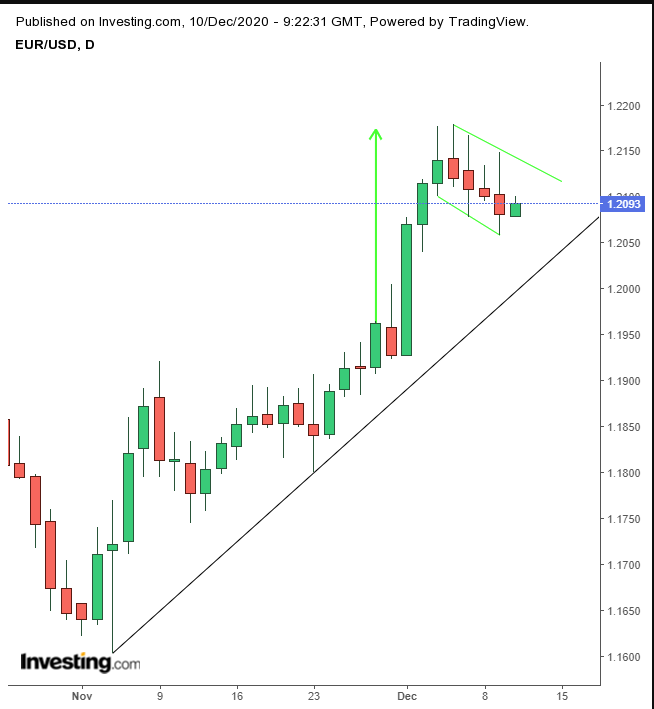 The currency has been declining since Thursday’s six-and-a-half-month high within a falling flag formation, presumed to mean that fresh bulls are taking over the rally since the November bottom after this month’s sharp uptake.

The mega cap tech selloff dragged down the major US indices with the retreating from a record, and the faltering. Soon-to-be S&P member, Tesla (NASDAQ:) dropped after a JP Morgan analysts said the company was “dramatically overvalued.” And Zoom Video (NASDAQ:), the poster child of work-from-home shares, whose price jumped over 500% this year, also suffered losses because of a JP Morgan downgrade.

DoorDash (NYSE:) bucked the trend yesterday when it made its public debuted, nearly doubling at its launch. Today bring’s the much anticipated IPO of vacation home rental company Airbnb (NASDAQ:).

Yields on US Treasuries, including for the , declined along with the , as the currency trades within a rising flag. 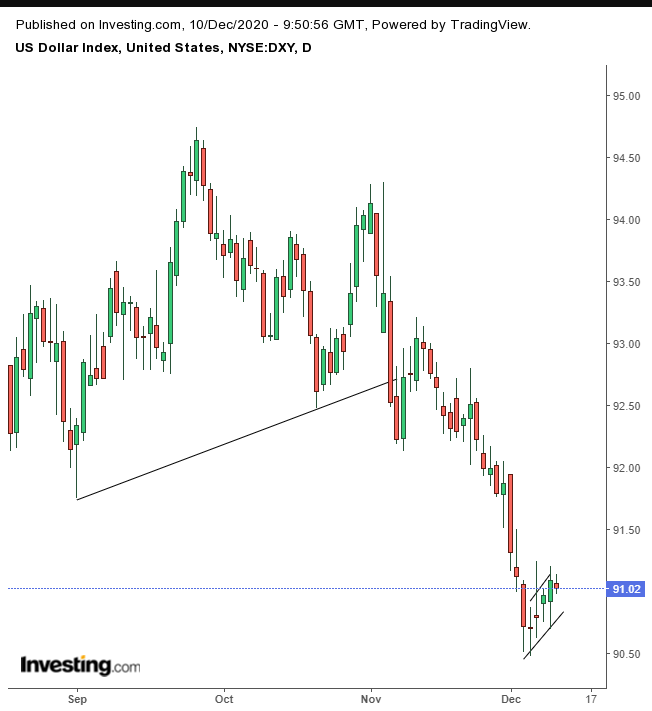 The greenback is gearing up for a resumption of its downtrend, signaled upon a downside breakout. 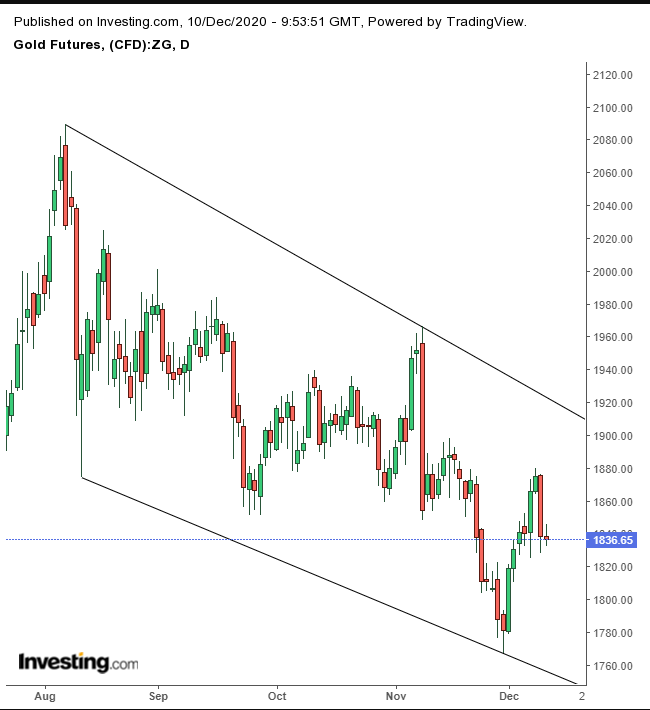 The yellow metal is extending yesterday’s sharp selloff, despite the risk-off sentiment on Wednesday, amid both dollar-strength and as appears to be siphoning capital away from gold, which is trading within a falling channel. 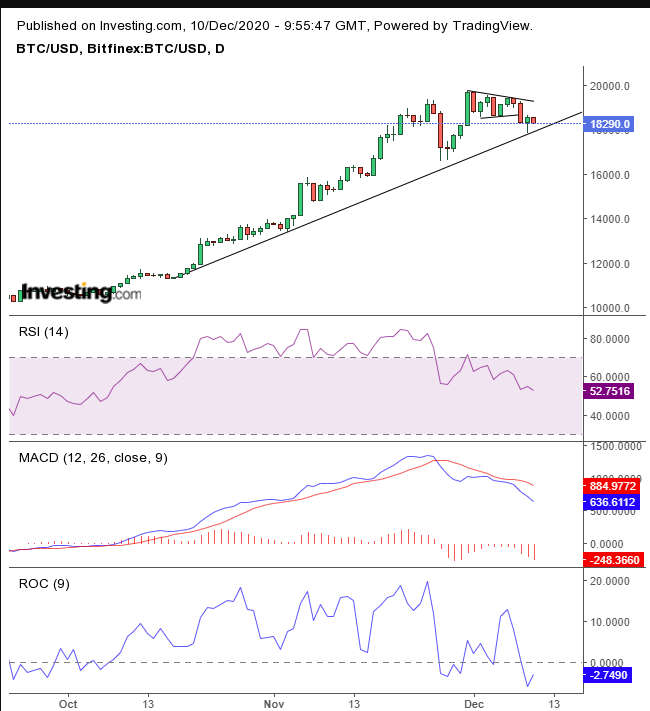 is retracing Wednesday’s lows, though the crypotcurrency closed higher. It hammered out support right on top of the rising trendline, dispelling some of our concerns of a blown-out bullish pennant and bearish indicators across the board after its extraordinary advance.

rose for the first time in four days. 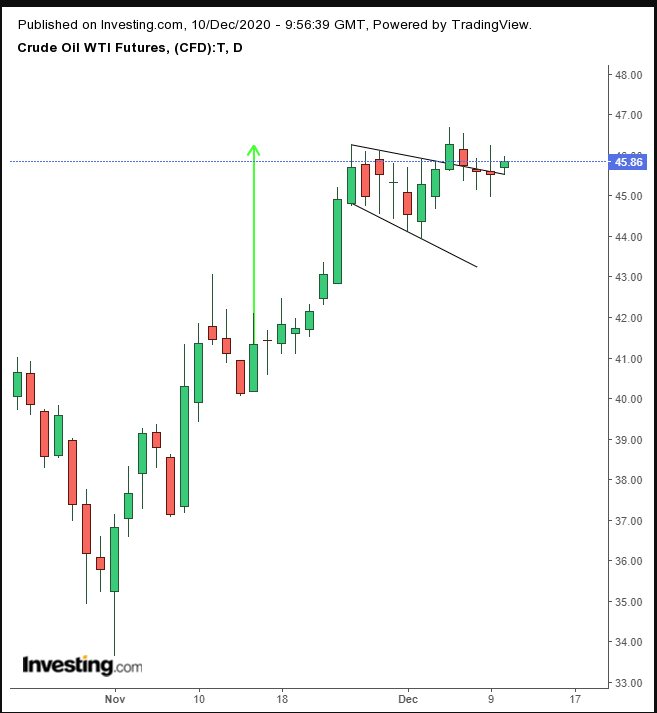 The recovery is confirming the support of a bullish flag.