US futures contracts on the , , and , and global stocks were trading in the red on Tuesday, weighed down by falling commodities after global markets rallied strongly on Monday, posting some of their best performances since June.

Gold continues to slide while the dollar rallies.

The narrative over the last two weeks has been that stocks were selling off due to rising yields, which would lead to higher interest rates and therefore dent an economic recovery.

However, in the previous two weeks when stocks rallied, the explanation was also rising yields. This time however the increase in yields was due to the expectation of higher inflation as a result of the economic recovery after the coronavirus enforced lockdown strangled growth.

Small cap futures—which had been leading rallies amid the reflation trade, as reopening economies will provide the most benefit to domestic stocks which have been neglected during lockdowns—are the worst performers, followed by NASDAQ futures. Yesterday, these two sectors provided the best performance, reinforcing our argument that there are two opposing trades happening simultaneously which favor both growth and value stocks.

In Europe, the Index fell 0.2%, after yesterday enjoying the best returns in four months. Oil producers like Royal Dutch Shell (LON:) and Total (PA:) sold off between 1 and 2%, tracking declining oil prices amid concerns of slowing demand in China, the world’s biggest oil importer.

Earlier, stocks in Asia sold off after sobering from China that its banking regulator is “very worried” about rising risk amid bubbles in the global financial markets and in particular, the Asian nation’s property sector. This would be a good time to remind that the 2008 global financial crash followed the US’s housing bubble. China is the world’s second-largest economy, so a collapse in its housing market could lead to devastating market chain reactions.

Yields, including on the Treasury note, were fluctuating today, first slipping, and while writing this article, edging higher to build on yesterday’s advance above 1.4%. 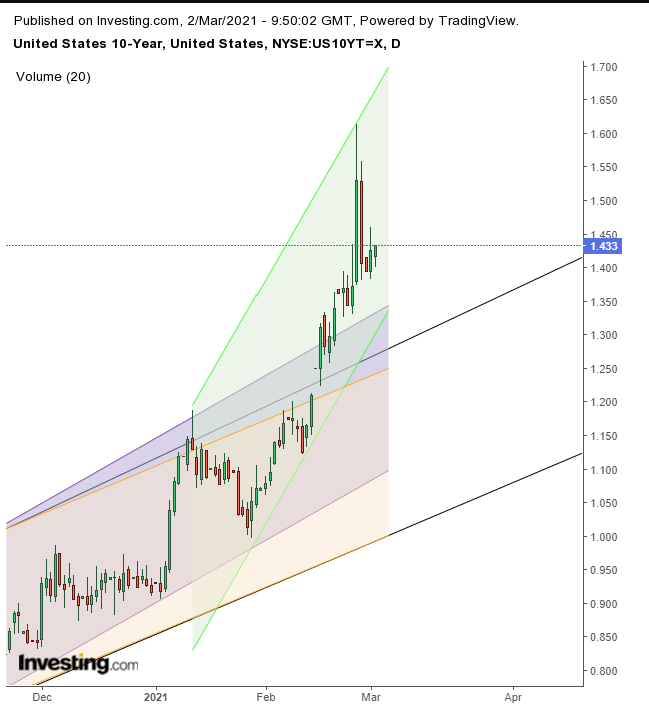 Rates have fallen towards the bottom of a rising channel, where they should find support, reinforced by the top of an earlier rising channel.

JPMorgan predicts yields will keep rising, yet advises not to sell stocks but rather buy the dips. The bank argues that the market is simply going through the business cycle, we have been discussing.

Bank of America, on the other hand, considers the current environment to be excessively optimistic, a signal of a market top.

The does not care what stocks and commodities are doing today. It is intent on rising. 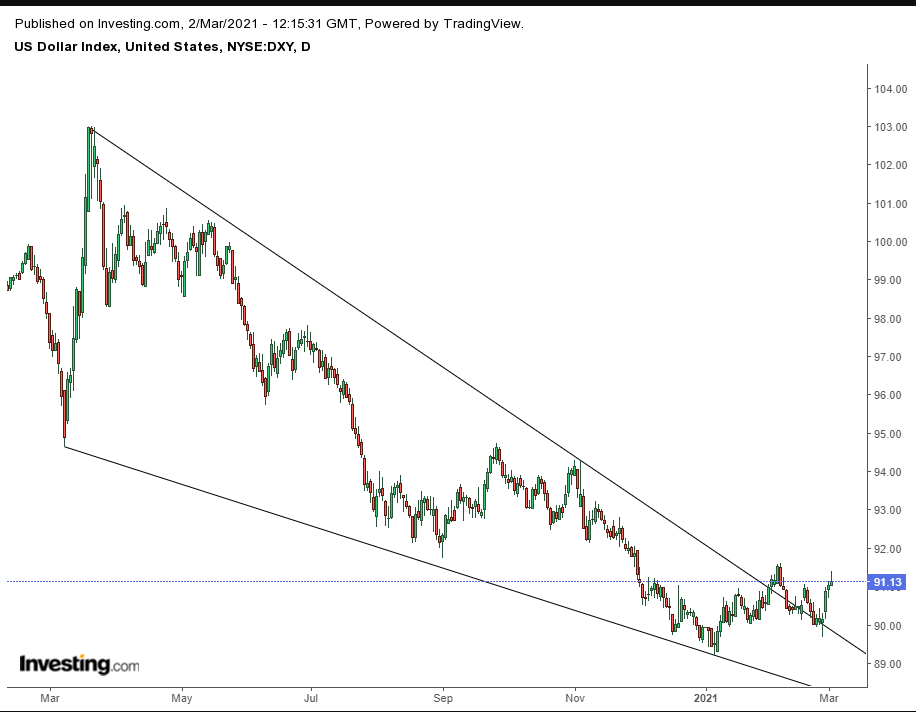 The greenback is recording its fourth straight advance, extending the bounce off the falling wedge. A climb above the initial penetration will solidify the of a reversal into a rising trend.

has fallen for the sixth day, but it is trading well off its lows. 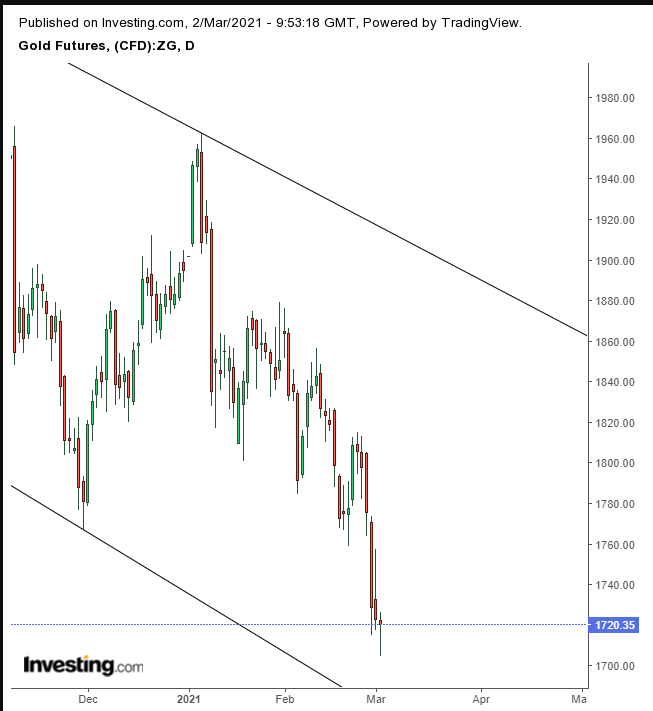 After nearing the bottom of a channel, the emergence of a hammer would signal a corrective rally within the falling trend that is framed within a falling channel.

edged lower, in correlation with other risk assets rather than because of its haven status. 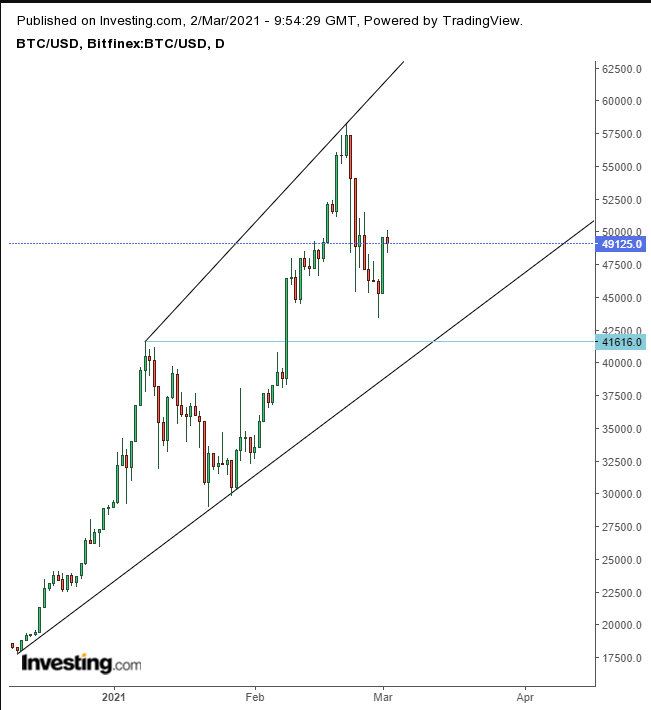 Yesterday’s surge follows a hammer, near the bottom of a rising channel, giving another rally credence.

managed to rebound from a 2% dip, demonstrating continued demand, despite fears of falling Chinese demand and concerns that OPEC will agree to raise oil supply at its . While the rebound leaves the price little changed from yesterday’s close, it is impressive considering the negative news. 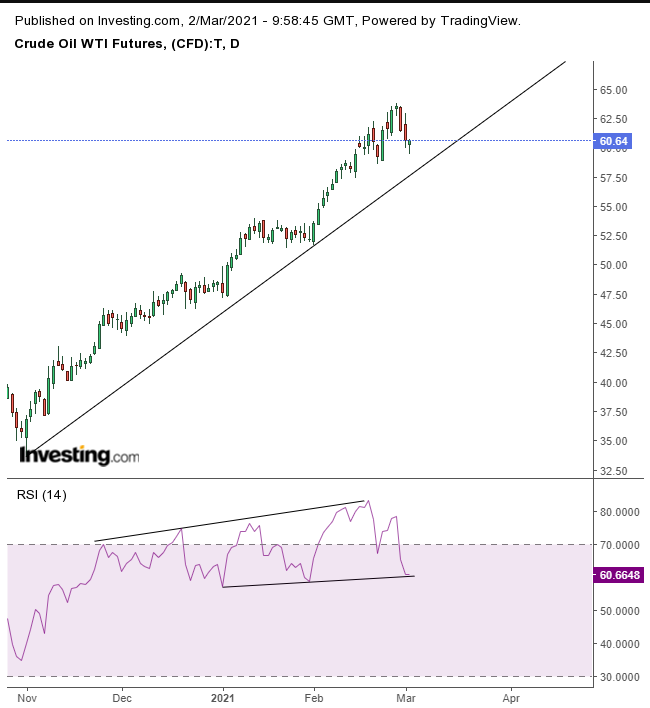 The price developed a hammer, after nearing the rising trend line. The RSI has found support as well.