The reflation trade returned in full force after Federal Reserve Chairman, Jerome Powell, reassured investors during two days of Congressional , that the Fed will keep its unprecedented accommodative policy in place. On Thursday, futures on the and were trading in the green while contracts on the and were in negative territory.

Momentum on the commodity supercycle continued as copper and aluminum hit new highs.

US futures extended Wednesday’s cyclical rotation, in which stocks that performed poorly during the worst global pandemic in a century and the resultant social restrictions are now leading the rally, while those that benefited from the stay at home requirements and posted massive returns—primarily in the technology sector— are now underperforming.

Contracts on the NASDAQ 100 and Russell 2000 are a mirror image of each other, with small cap futures outperforming as tech contracts slip deep into the red. 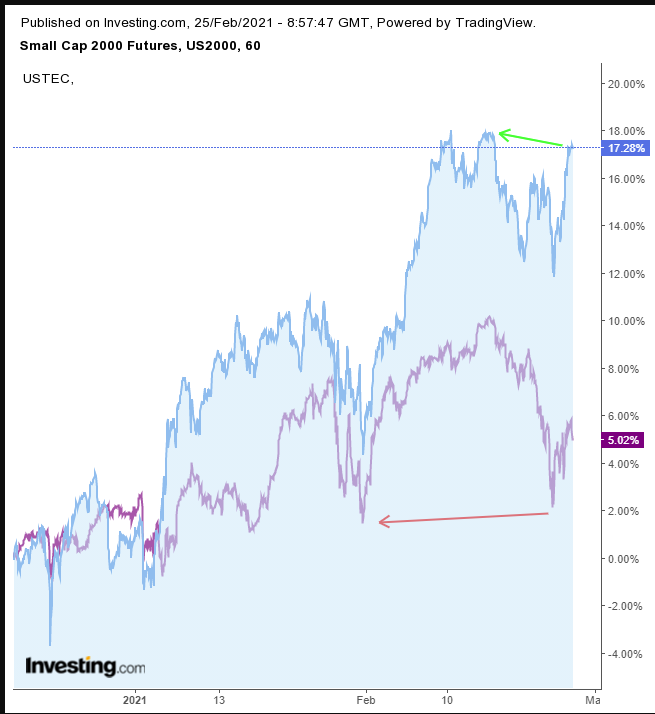 Stocks in Europe, including on the , extended a rebound to the second day today, boosted by the same cyclical rotation.

However, British bank, Standard Chartered (LON:) dropped 2.8% after reporting disappointing annual revenue despite reinstating its dividend, reaffirming its long-term solid guidance on profits and expressing confidence that it will recover along with the virus hit economy. The lender reported a decline in profits. US banks’ profits 36.5% last year, yet they’ve risen from the late 2020 bottom.

While that statistic reflects the position of American banks, Barclays (LON:) a whopping 38% crash in net profits last week, even though, like Standard Chartered, they announced a resumption of dividend payments. BARC fell on the day of its earnings report but has been rallying since.

Perhaps, the ‘s sixth-day-straight advance (which started after the Barclays’ report and therefore would not affect its stock) is now weighing on the bank sector, as it is on the entire UK stock market.

Sterling extended to a three-year high on the expectation that the UK economy will recover. Any recovery will drive wages higher and therefore may see a hike in inflation, which means that the Bank of England is unlikely to move away from its sub-zero rates any time soon. 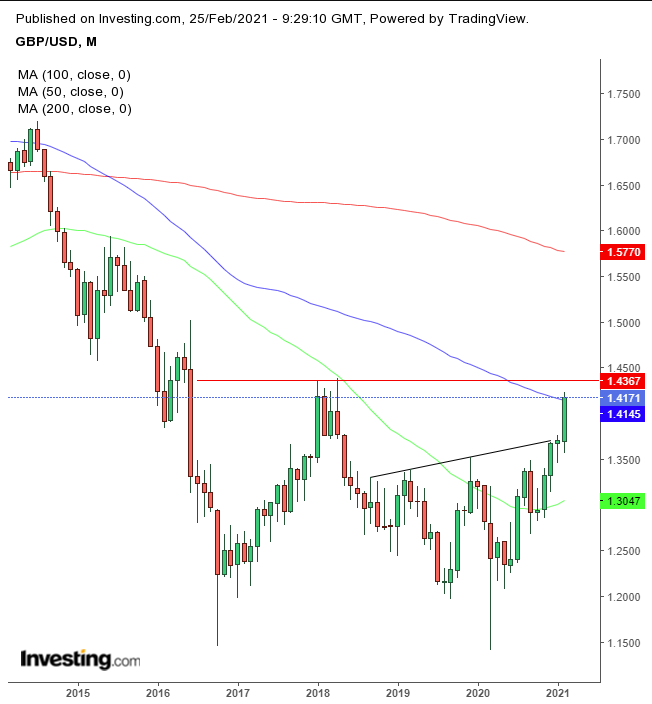 The pound found resistance by the 100-monthly MA, as a H&S bottom, which has been developing since 2018, propelled the price toward 2018 highs. If these highs are superseded, sterling will have completed a massive double bottom since 2016.

The UK’s , whose listed companies are heavily dependent on exports, has been pressured lower by the strengthening currency. 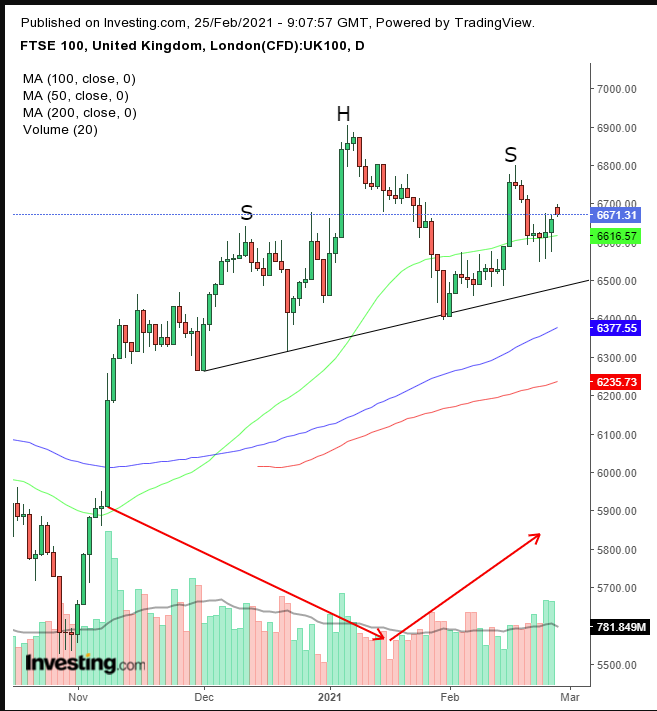 The benchmark index was struggling to maintain an advance, however, as it was developing a potential H&S top.

Shares in Asia this morning tracked yesterday’s Wall Street rally. The narrative is that the Federal Reserve’s calming message about inflation, and that US interest rates will remain low for a long time, helped yields ease and boosted stocks.

Here is another example of a market dichotomy, because the recent increase in yields is part and parcel of the reflation trade. Rising yields and interest rates are considered to be positive for expanding company profits which is also good for consumers as they benefit from an efficiently growing economy, offering more jobs and higher salaries.

All major Asian regional benchmarks were in positive territory today, with South Korea’s soaring 3.5%, after the Bank of Korea its record low 0.5% interest rate unchanged, citing lingering uncertainties amid a third wave of the coronavirus. The central bank’s comments added to the message of continued support by the Fed.

On Wednesday, US stocks rebounded and the yield on the Treasury temporarily passed the 1.4% mark, before paring that advance. In other words, stocks and yields rose in unison, in contradiction to the market narrative that easing yields boost stocks. Today’s narrative views rising rates favorably as they were the stated reason for yesterday’s headwind.

The fell to the lowest since Jan. 6, in contradiction of the reflation narrative. 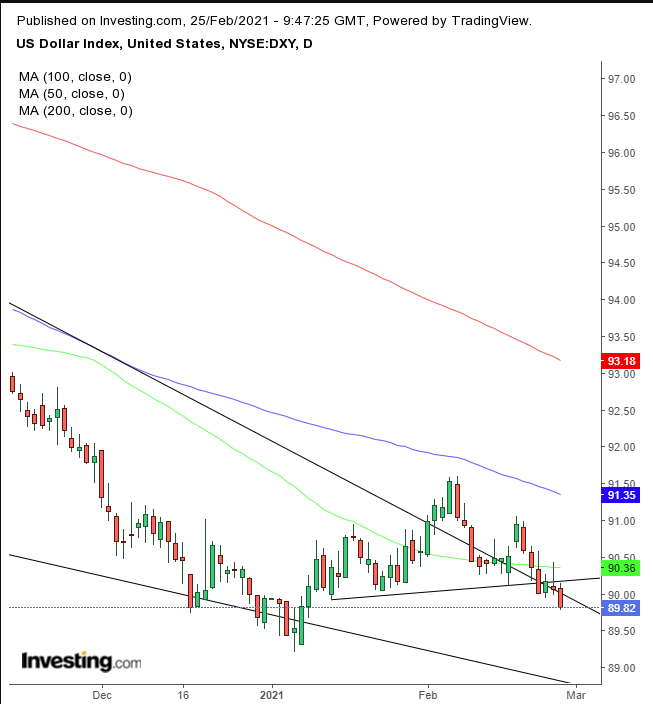 Technically, the greenback completed a H&S top. However, the pattern would have little vested interested as it had an insignificant preceding rally to give it its oomph. The USD continues to go wild as it approaches the apex of a falling wedge since the March high.

fell for the third day, despite dollar weakness. However, also slumped despite its as it developed the status of a safe haven.

gained for the sixth day. Along with , the two metals hit their highest levels since 2011, as investors believe the commodities will each benefit from increased industrial usage as the economic recovery takes hold. 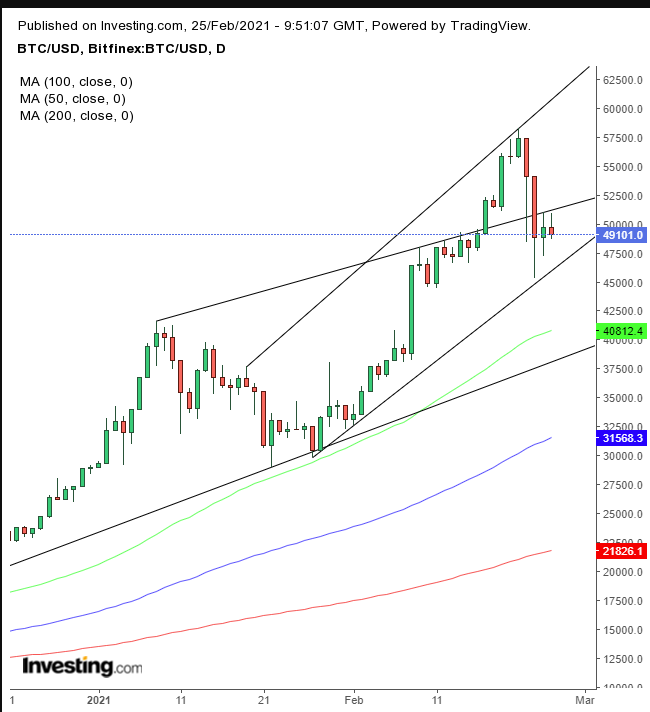 The cryptocurrency extended its range for the second day, after reaching the bottom of a rising channel since its January low. If it holds, it will lead to an upside breakout of the earlier, more tempered rising channel. The range is a struggle around the $50,000 psychological round number.

edged higher, extending Wednesday’s strong advance, and remaining close to its yearly peak due to concerns of tightening supply while the cyclical rotation boosts demand. A trio of key points are currently driving the .