US futures contracts on the , , and and European stocks found their footing on Wednesday as yields rebounded, bucking the selloff in Asia. The move suggests markets believe the global economy is set to recover as the coronavirus vaccination program gains pace.

The Index was led by travel and construction companies, which had suffered due to the coronavirus lockdowns, and are now considered good value as economies start to tentatively reopen. The sectors were boosted by stronger-than-expected growth in the German economy. Europe’s steam engine by 0.3% QoQ in last year’s fourth quarter, beating the expected single percent quarterly growth.

In London, the was driven lower by a strengthening which was weighing on the export-dependent island. 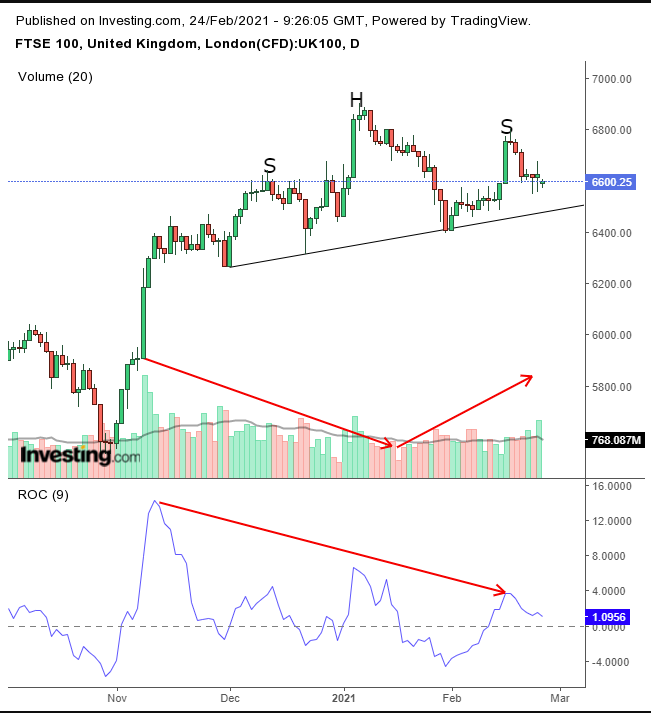 The FTSE is developing an upsloping H&S pattern, whose dynamics are misplaced optimism (in the actual event of a downside breakout), pushing the right shoulder highs. Notice the diminishing volume upon the right shoulder of the head, and then the rising volume at the head’s fall—in the opposite direction to the underlying uptrend. If that continues, we can expect the same spikes in volume upon a breakdown. The Rate of Change demonstrates negative divergence in momentum, as well.

The pound hit a three-year high on the view that the Bank of England would refrain from pulling out the negative rate weapon on improving wages which may drive inflation higher. 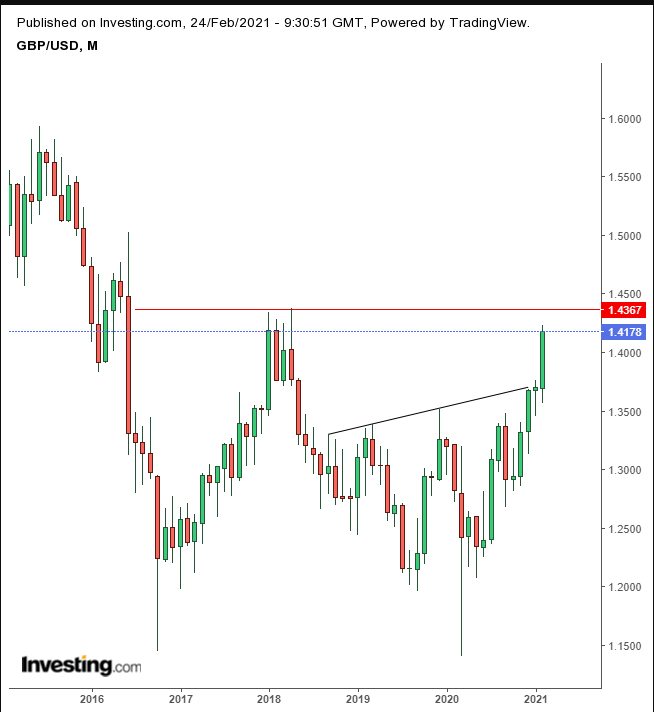 Having completed a H&S double since 2018, sterling is to potentially complete an even larger double bottom since mid-2016.

As is often the case, much of the market moves in herd mentality, and different herds can have a different mentality, even, it seems, in a global market.

The recent selloff in bonds is considered positive for US equities, and was even declared so by the Fed boss himself. The Chairman of the Federal Reserve, Jerome Powell yesterday that rising yields showed optimism.

In Asia the same rising Treasury yields put the high valuations of growth stocks under pressure. Japan’s index fell 1.8%, brought down by technology shares. Trading in it was particularly rough, as tech, energy and consumer cyclicals fell hard after reports of higher taxes on trading revenue surfaced.

In US trading on Tuesday, the Index bounced back from a 1.8% sharp selloff on Monday after Powell’s to Congress calmed investors’ concerns about the impact of inflation on growth, prompting a buying dip.

The , which primarily lists tech stocks, has been suffering the most recently. Rising yields are driving investor worries that tech share valuations might no longer be sustainable. However, after Powell reassured markets that the Fed was not considering pulling its support, most of a 3.5% plunge was erased.

Yields on the Treasury note recovered most of this loss. 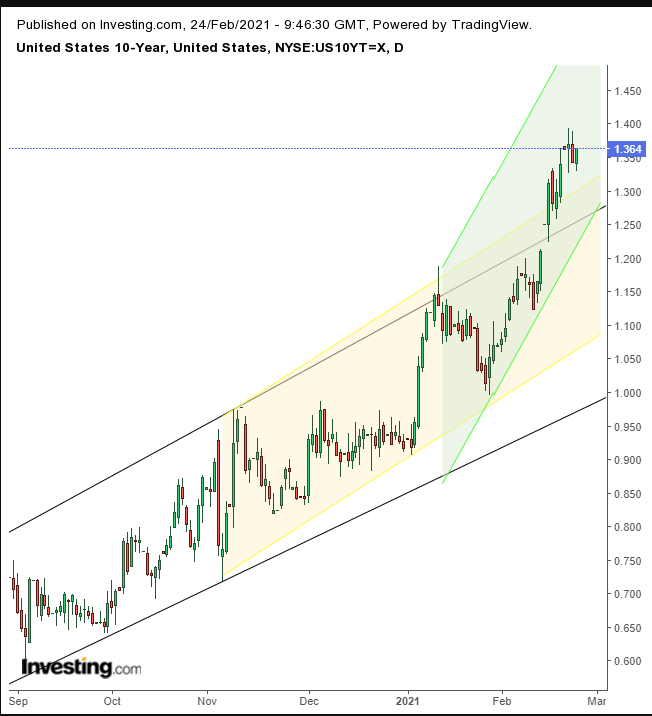 The rebound suggests that yields are continuing on their ever steepening ascent, which is what shook investors out of their auto-pilot buying stupor.

fell, even though the weakened. The drop in the yellow metal supports the argument that after last year’s rally to new highs, investors have turned their attention to as the new store of value. 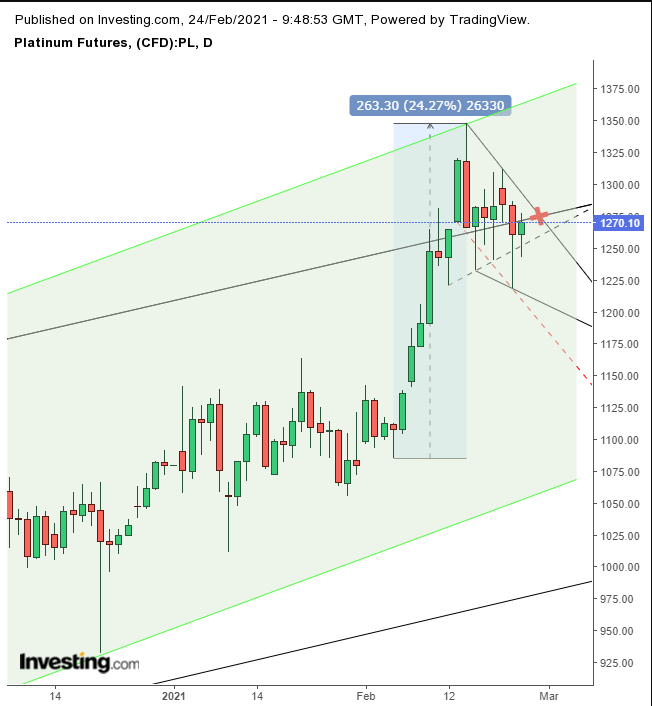 The metal rose amid a continuation pattern, suggesting it will break out of its current rising channel to begin a steeper incline. 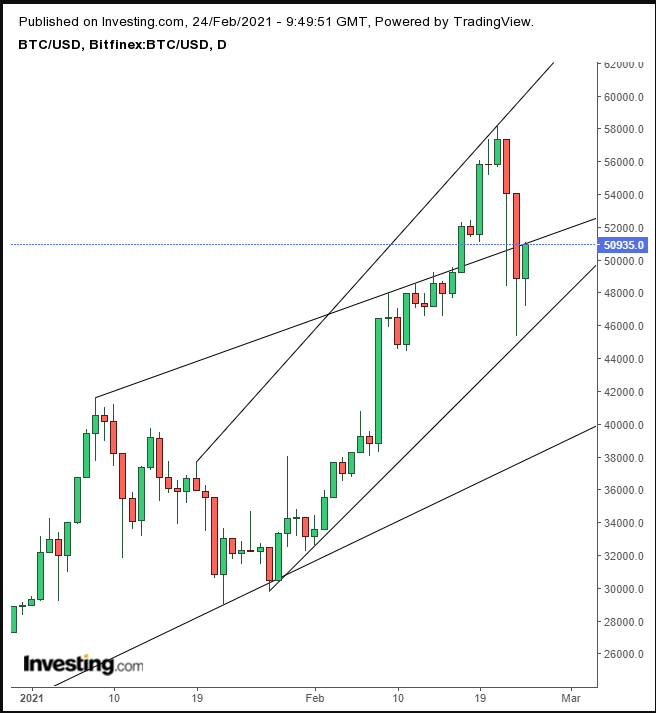 The cryptocurrency recovered after reaching the bottom of a rising channel since its January low.

rebounded from a selloff to a slight gain. WTI may be headed for a as markets believe an economic recovery is imminent, despite weak demand for oil products currently.