US futures on the , and are down on Monday while the rotation back into tech shares is whipsawing futures, which at time of writing are only marginally lower. The selloff ahead of the Wall Street session follows US markets posting some of their .

Oil is down ahead of today’s OPEC+ where whether to extend output cuts in an attempt to keep global markets in balance. Some members, including Iraq, are keen to boost production in order to boost their own economic performance.

US futures reversed the cyclical rotation, with contracts on the Russell 2000 suffering the steepest losses. The same pattern was visible across the globe. Small cap stocks, banks and energy firms—sectors that led the November rally, after being ignored throughout the pandemic—started to decline, while technology and defensive stocks outperformed.

In Europe, the Index opened lower, with ongoing Brexit negotiations adding to coronavirus woes. Over the weekend, the death toll from COVID-19 in Europe surpassed 400,000. In-person Brexit talks finally restarted on Saturday, but now traders are waiting to see if there will be a phone call between EU Commission President Ursula von der Leyen and UK Prime Minister Boris Johnson, to demonstrate that the talks are back on track with only five weeks left before Britain will leave the EU.

The energy sector was the biggest lagger. Royal Dutch Shell (AS:) and BP (LON:) were both down following the selloff in oil futures ahead of today’s OPEC+ meeting.

In Asia, the Index sank 1.6%, its biggest loss in a month, but it has since recovered. Hong Kong’s was the worst performer, dropping 2.1%, due to a jump in COVID-19 cases there and possible new US sanctions on Chinese companies. The index had posted its best month in 25 years.

China’s outperformed the region, falling just 0.5%, after its National Bureau of Statistics said its official was at 52.1, beating the 51.5 expectations.

Japan’s was the second best-performer, dropping just 0.8% after the country’s climbed 6.4% on an annual basis.

Australia’s fell 1.25% which wiped out all of last week’s gains, but the index will still register its most profitable month ever. The selloff was provoked after a new round of tensions between Australia and China—its biggest two-way trading partner. China has hit Australia’s wine industry with a 200% tarriff.

Last week, US stocks climbed to fresh records, with the enjoying its best month since 1950 on on potential vaccines.

Stocks worldwide are still up 13% in November as traders hope for a global economic recovery next year, even though the United States and Europe continue to struggle with spiking COVID-19 cases. Goldman Sachs predicts there will be significant vaccine availability by mid-2021, which will boost economic growth.

It appears that despite continually rising case numbers and possible additional lockdowns, investors are willing to keep bidding up stocks—with occasional profit taking—as long as the trajectory in data is on the right path and the Fed remains vocal on . The market is also relieved that the transition of power from the Trump to Biden administrations appears to be progressing despite some ongoing saber rattling by President Donald Trump.

Yields on the Treasury note rebounded from a decline, irrespective of this morning’s broad selloff. 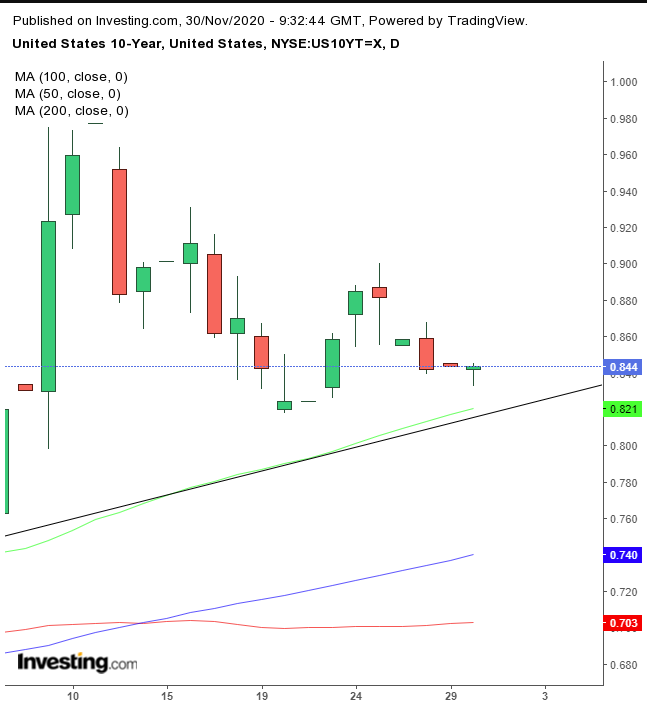 The recovery formed an intraday hammer, confirming the Nov. 20 inverted hammer and the uptrend line.

The extended its selloff to reach its lowest level since Apr. 27, 2018. As the greenback falls below the Sept. 1 low, it is registering a new trough in the downtrend.

Incredibly, notwithstanding both the dollar and equities selling off. 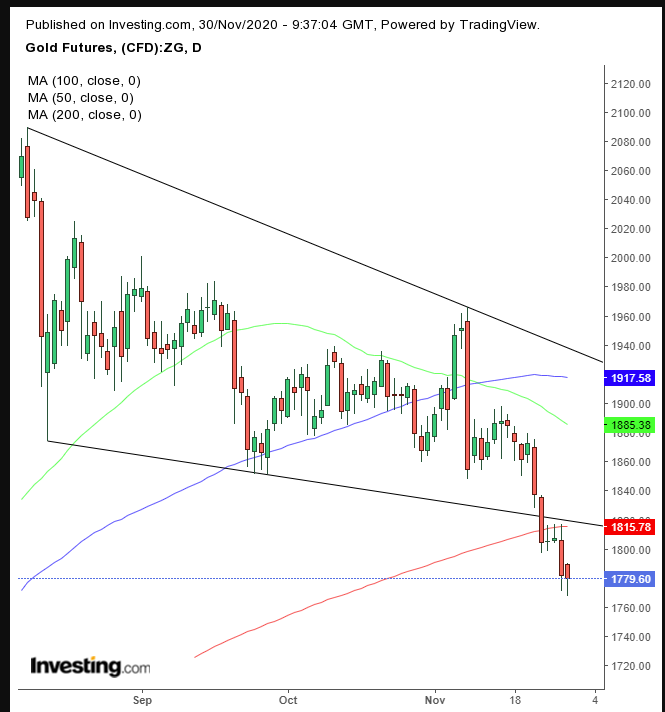 We, therefore, attribute the decline to technicals. Once the bullish wedge failed, longs were stopped out and shorts triggered. Gold found demand by Sunday’s lows and has managed to pare most of Monday’s losses. It is still beneath the 200 DMA that underscored the importance of the bullish pattern that blew out.

Even as gold and silver remain closely watched for new highs, —which up until now has been a laggared—could be about to head higher.

gave up the session high of its three day rally, after finding support at the bottom of a rising channel after an extraordinary selloff. 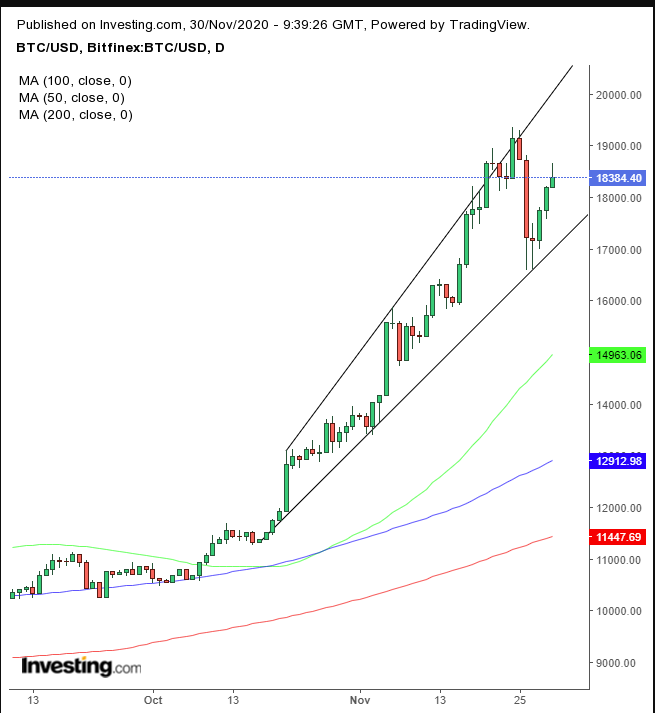 If the price of the cryptocurrency closes off its lows, it may form a bearish shooting star. If the price closes near the top of the session, it will complete a three-white-soldiers bullish pattern, very close to the December 2017 record.

is down for the second day. The OPEC+ cartel is split between the self-interest of East and West members, and and diesel demand, which has recovered 90% to pre-pandemic levels, and jet fuel which is still gutted at just 50% of pre-COVID levels. 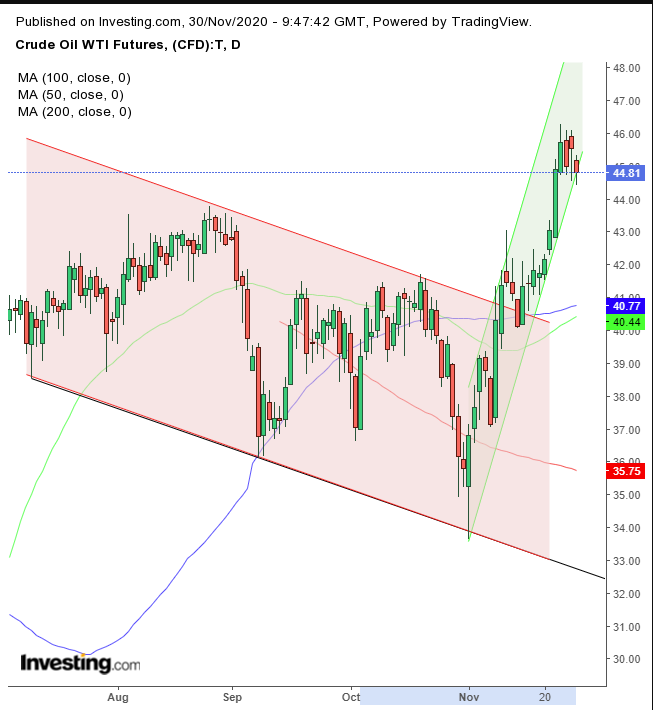 While oil is down, it has rebounded off its lows after finding support by the bottom of a rising channel, framing the short-term uptrend, after breaking free of the medium-term downtrend, framed by the falling channel since its August highs.