Futures on the , and headed slightly higher in trading on Thursday after a Biden inaugural bounce saw US markets post a second day of records. However, contracts on the were lower, continuing the trend of a reversal in the cyclical rotation. Global stocks also advanced on the recurring narrative that additional fiscal stimulus will reignite the US economy, allowing companies to profit.

However, the dollar continued to fall and Bitcoin also slipped for the second day.

In Europe, sectors sensitive to the economic cycle, such as banks and carmakers, led gains in the Index.

Most of Asia climbed, with China’s the notable exception, retreating 0.1% on profit-taking after the index temporarily topped 30,000 points for the first time since May 2019. South Korea’s , outperformed closing up 1.5% on strong export data.

On Wednesday, US stocks jumped to all-time highs on newfound optimism as President Joseph Biden took office. The markets are hoping that a Democratic president as well as a Democratic controlled Congress will facilitate Biden’s proposed $1.9 trillion spending plan to combat the coronavirus and kick-start the economy.

The surged over 2% and the Index enjoyed the best gains in reaction to a new president since Jan. 20 became the official swearing-in date in 1937, according to Bloomberg. 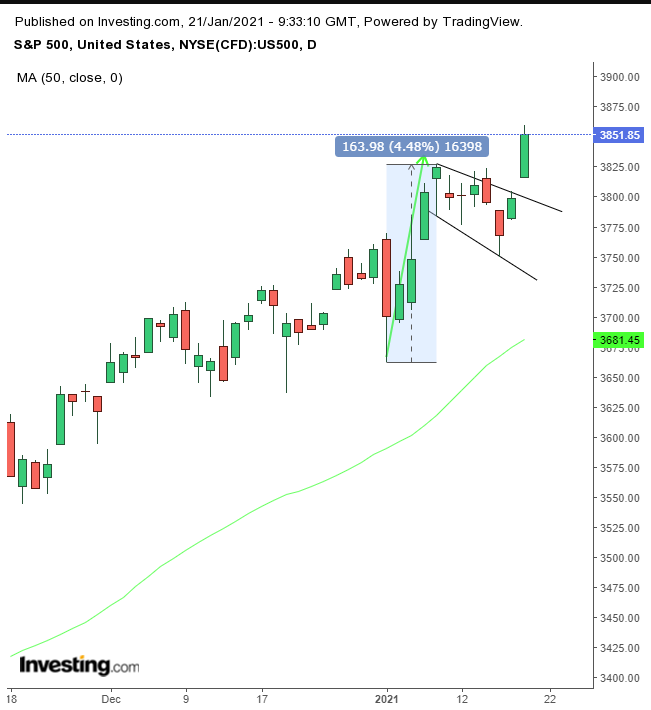 The S&P 500 completed a falling flag, bullish after the preceding 4.5% surge in just four sessions. Our price target is 3,964. 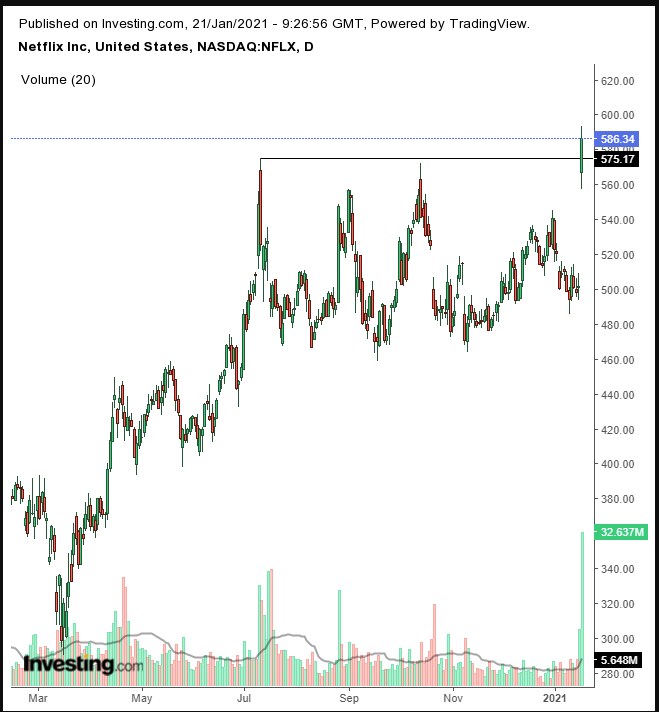 The stock cleared the rut in which the price was stuck since July 13, accompanied by the highest volume since October 2019.

Yields, including on the Treasury note, rose slightly but within a falling flag—bullish after the preceding leap. 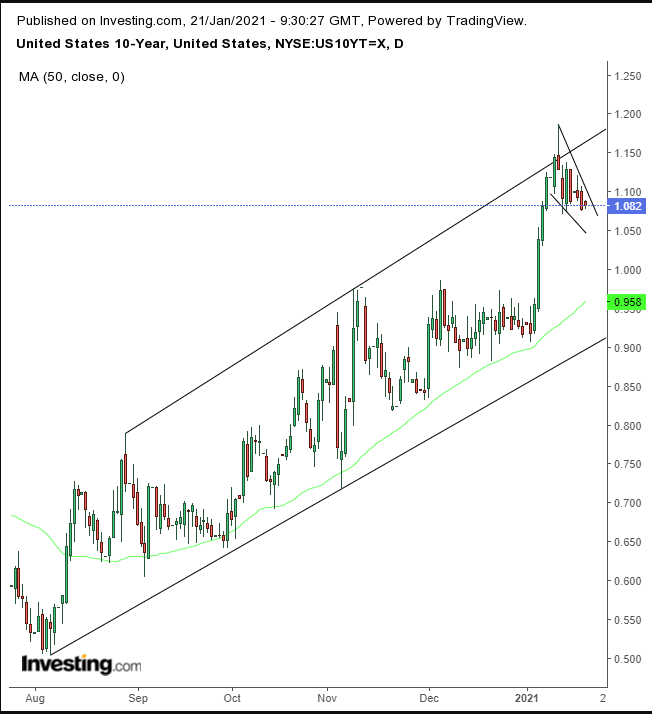 The move suggests yields are going to provide an upside breakout to the rising channel to begin a steeper ascend.

The fell for the fourth day, bolstering the argument that massive stimulus will weaken the greenback due to oversupply, overshadowing the sentiment that higher yields will provide a bigger payout to USD holders. 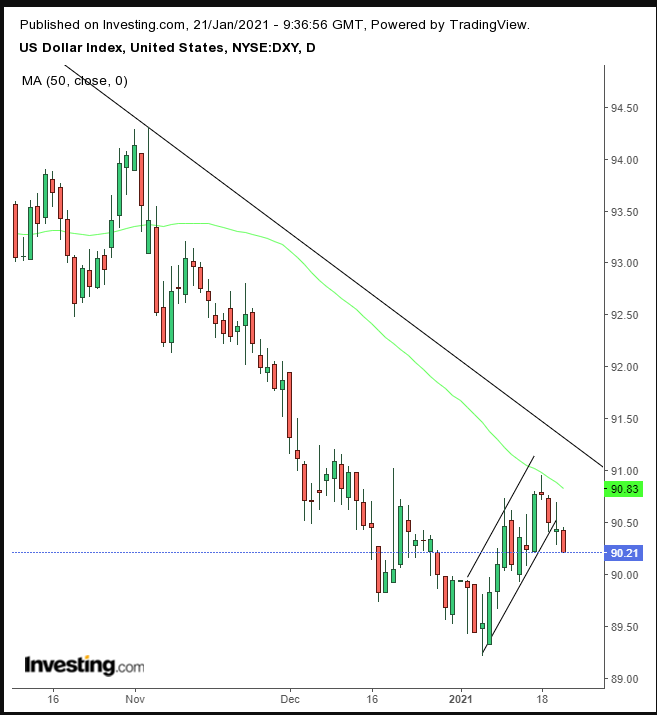 The dollar appears to have completed a rising flag, bearish within the downtrend, and right beneath its downtrend line since the March top.

The fell after the BoJ kept its main policy settings , ending an attempted bullish pennant, but beware the possibility of it resuming along a bullish flag. 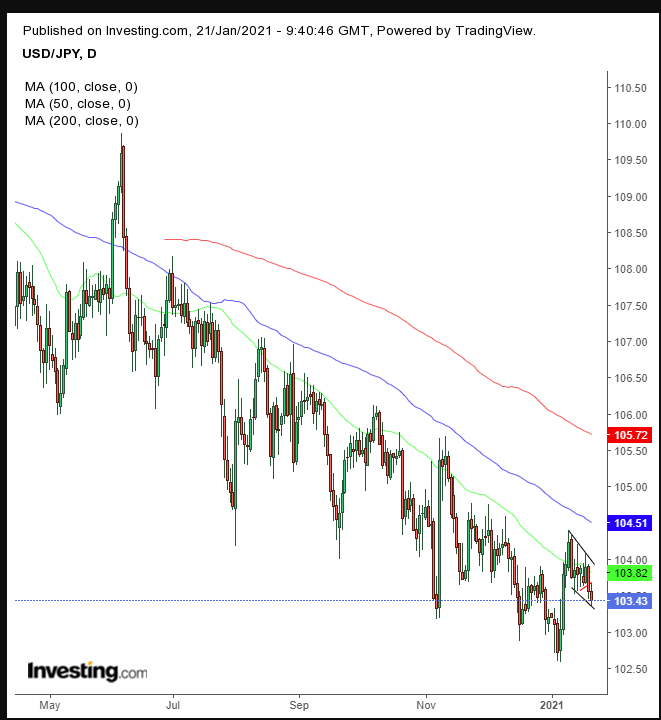 However, the downtrend is against that scenario.

Risk-on kept a lid on , despite dollar weakness. 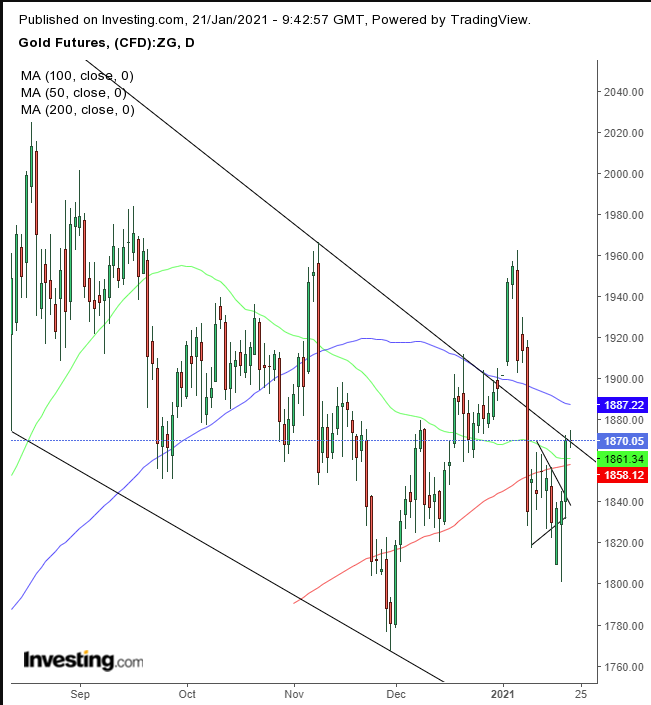 Yesterday the precious metal blew out a bearish pennant, rising back above the 200 DMA—with the 50 DMA above the bigger MA, providing the setup for an explosive move. The yellow metal still has to climb back above the top of the falling channel, with the Jan. 8, $1,962.50 high, providing potential resistance.

faltered for a second day, apparently blowing out a bullish pattern. 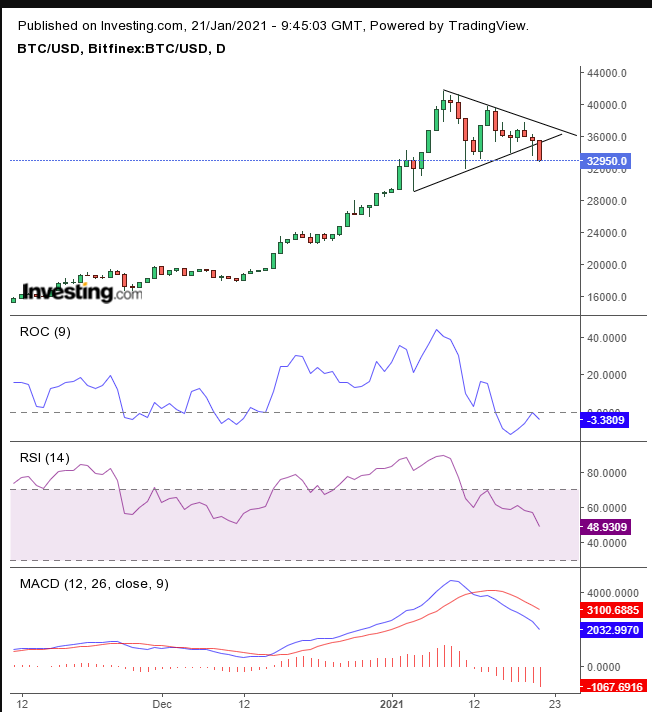 The largest cryptocurrency by market cap fell below a bullish pennant, possibly turning it bearish. Momentum and price-based indicators were also bearish.

slumped for the second day, as the outlook of weakened demand offset a lower dollar. The Biden administration has to shake up US energy policy which may have long significant impact on the price. 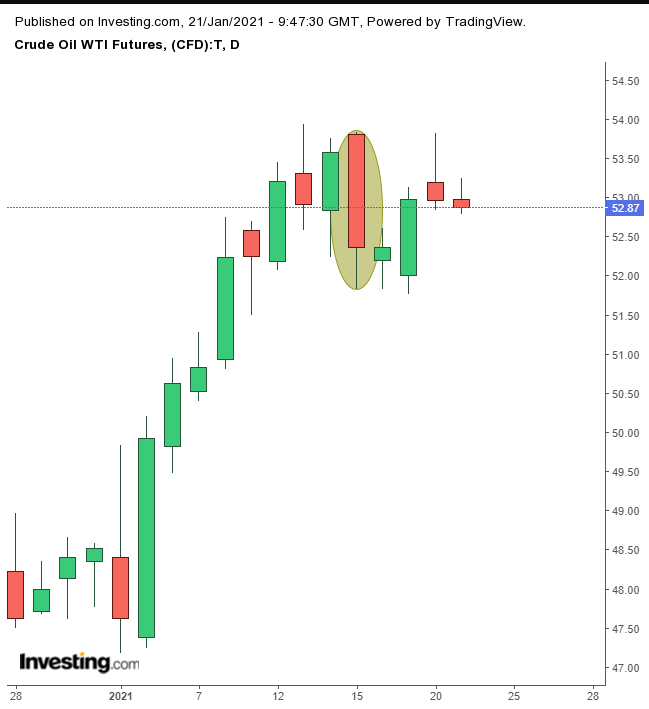