US contracts for the , , and , as well as European stocks meandered on Wednesday, as investors awaited today’s key Fed and subsequent in the US. Markets are eager to know what the central bank’s policymakers will share regarding their outlook for tightening when economic growth is at a crossroads as it remains under threat of inflation, manifested currently by the highest Treasury yields in a year.

Oil edged lower and the dollar is holding steady.

The current position of yields deserves to be reinforced: they are now back to levels that predate the COVID pandemic, even though the US economy isn’t even close to its pre-pandemic growth rate.

Still, investors appear unanimous in their outlook for higher rates, which would be raised to manage higher inflation, something that hasn’t occurred in 12 years. But just because investors may be betting on the resumption of an escalating economy doesn’t guarantee it will actually happen. The economy could strengthen, or weaken, or head sideways, maybe even all at the same time.

In other words, we should tighten our seatbelts and hold on. At this stage we have no idea how rocky this ride is going to be.

For example, at time of writing, futures on the Russell 2000 are underperforming, more than 0.5% in the red. Given that the underlying has been a leading indicator for expectations of a reopening economy—in accordance with rising yields (whose inflation indicator suggests a too-rapidly expanding economy)—we’d expect the contract to outperform too, not lag.

OK, fine, that’s not the case. Then at least the opposite end of the cyclical rotation should outperform, if investors are rotating back into sectors that have benefited from the social restrictions.

Wrong! At this moment contracts on the NASDAQ 100 are 0.15% in negative territory, while S&P 500 futures are flat. And Dow contracts are just barely in the green.

While these moves may be small, we present this is an example of the market’s unpredictability, regardless of the scale. There are simply too many moving parts and unknown influences right now with endless combinations to boot.

This morning the dipped, with declines in travel and leisure shares—corresponding to the underperformance of the Russell 2000 contract, whose fate is tied to the loosening of social restrictions.

Interestingly, European investors appear largely unconcerned that the major EU countries the use of AstraZeneca’s (NASDAQ:) vaccine, awaiting confirmation of its safety, when the region already has a vaccine distribution crisis.

As in Europe and likewise for US futures, earlier today stocks in Asia drifted. China’s finished flat, after the US placed sanctions on another 24 officials of China and Hong Kong because of the regime’s stifling of political freedom in the global financial hub.

Yesterday on Wall Street, American shares declined, ending a five-day winning streak which included three consecutive record closes. The was pressured lower by and shares, while  and led a counter-rally, showing the selloff was triggered by a reversal of the Reflation Trade.

This doesn’t necessarily mean that investors don’t expect the end of lockdowns and a return to a normal economy. Rather this flip-flopping is likely a part of the normal market dynamics of buying, then selling, in order to lock-in profits. With an economic recovery having already been priced in as part of the Reflation Trade, we can expect an ongoing tug-of-war between growth and value shares.

Case in point: on Tuesday, while Apple (NASDAQ:) and Microsoft (NASDAQ:), whose profits grow when people are stuck at home, were among the top performers, Boeing (NYSE:), whose shares should be buoyed by a return to travel, and Goldman Sachs (NYSE:), which profits when interest rates rise, were leading the decline.

Today, yields, including for the US Treasury benchmark, are at the top of the session. 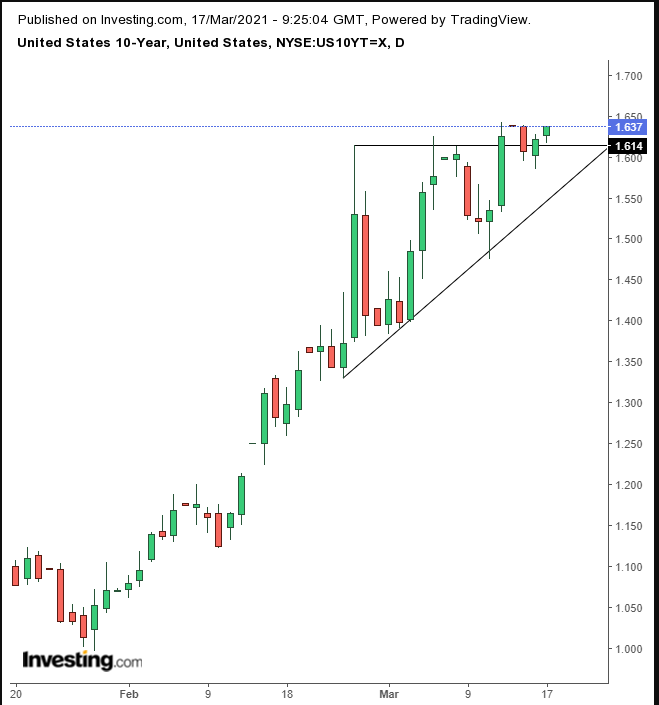 Rates are pushing against the last resistance after completing an ascending triangle.

The is little changed. 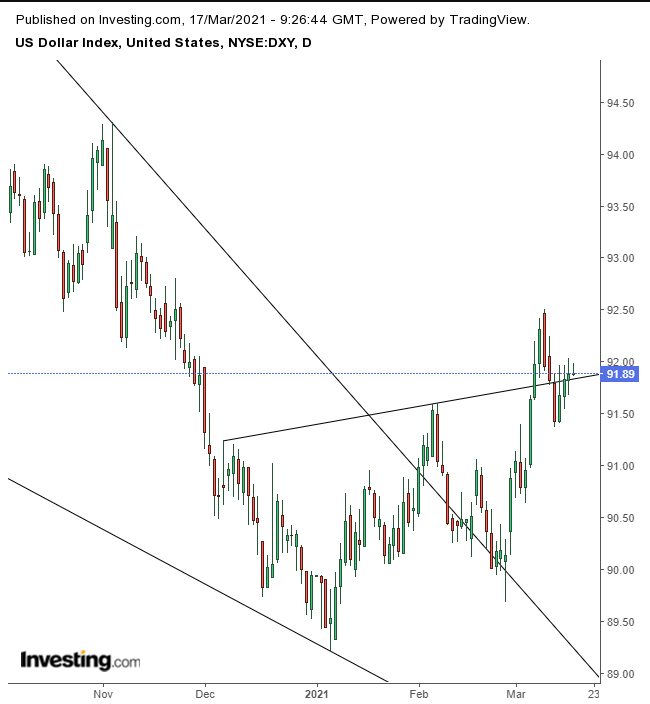 However, the greenback is trading above the neckline of a double bottom for the second day. Nevertheless, the price has been unable, thus far, to best the 92.00 level. That pattern follows the completion of a falling wedge since the March peak.

We’ve warned that while could rebound toward the top of its falling channel, the impetus remains to the downside. 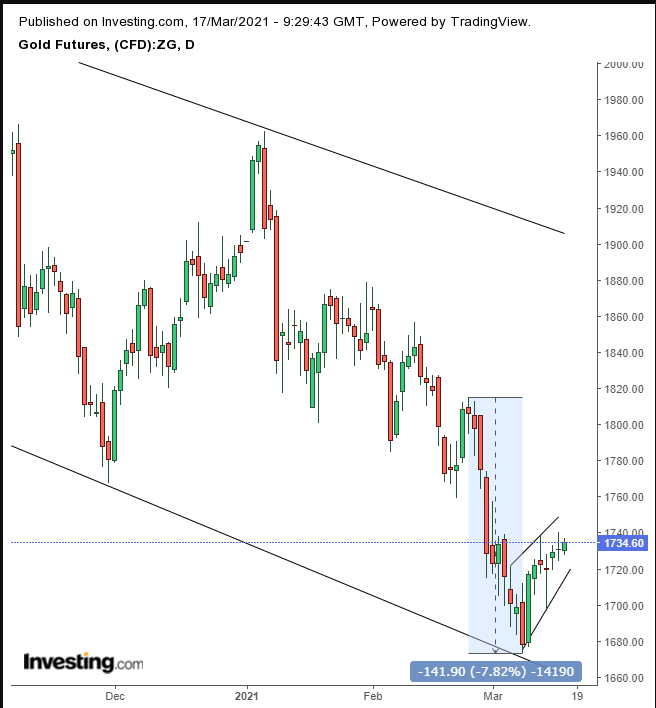 We now believe we’re identifying a potential rising flag, bearish after the commodity’s near 8% plunge in just ten days. A downside breakout would suggest that the price could fall even faster, dropping through the channel bottom. 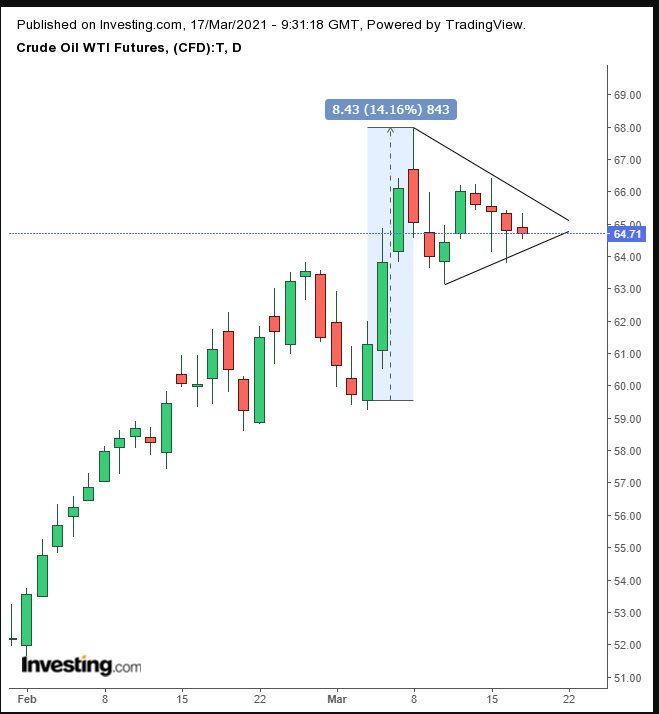 However, WTI is trading within a pennant, bullish after the preceding 8.4% jump in just four days. The pattern is complete upon an upside breakout.