US contracts on the , , and rallied on Monday following comments from Treasury Secretary Janet Yellen on Sunday that the US could return to full employment by 2022 if President Joseph Biden’s $1.9 trillion coronavirus relief package is passed.

Futures were boosted by a selloff in US Treasuries and the dollar found support.

The vaccine rollout, slowing growth in coronavirus cases, positive corporate earnings and renewed hope that US stimulus is imminent gave investors new vigor to increase risk at the start of the week.

In Europe, Italian stocks led the Index higher as former president of the European Central Bank, Mario Draghi—dubbed the savior of Italy— from key parties to form a new government there.

In Germany, Dialog Semiconductor (DE:) surged 17.5 % on the open to a new record, as the firm agreed to be purchased by Japan’s Renesas Electronics (T:)

Most of Asia was in the green, with the notable exception of South Korea’s which fell 0.9%, led by a sharp selloff in Hyundai (KS:), which fell 8.6%, and KIA Motors (KS:), which slumped 15%, after the carmakers that they’re no longer negotiating with Apple (NASDAQ:) to develop an autonomous electric vehicle. 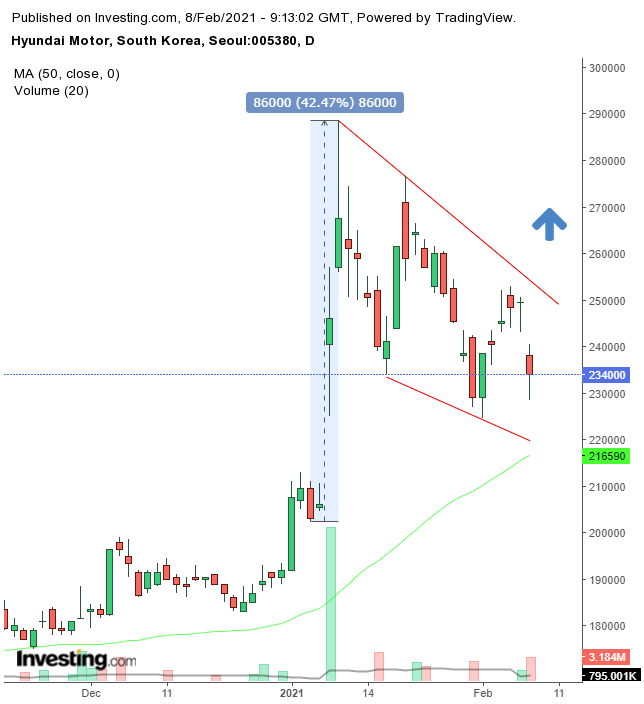 From a technical perspective, Hyundai’s dip may be a buying opportunity, confirmed when its current downward range, called a “falling flag,”—bullish after the preceding 42.5% surge—will complete with an upside breakout.

Japan’s surged 2.1%, ending at its highest level since June 1990 on news that the government is considering ending its state of emergency in some areas earlier than expected.

On Friday, US indices hit , despite disappointing figures. Markets rallied as traders thought the lower than expected figures increased the case for more fiscal stimulus sooner.

The Treasury yield rose to its highest in a year, while the pace of US inflation implied by the bond market accelerated to the fastest since 2014. 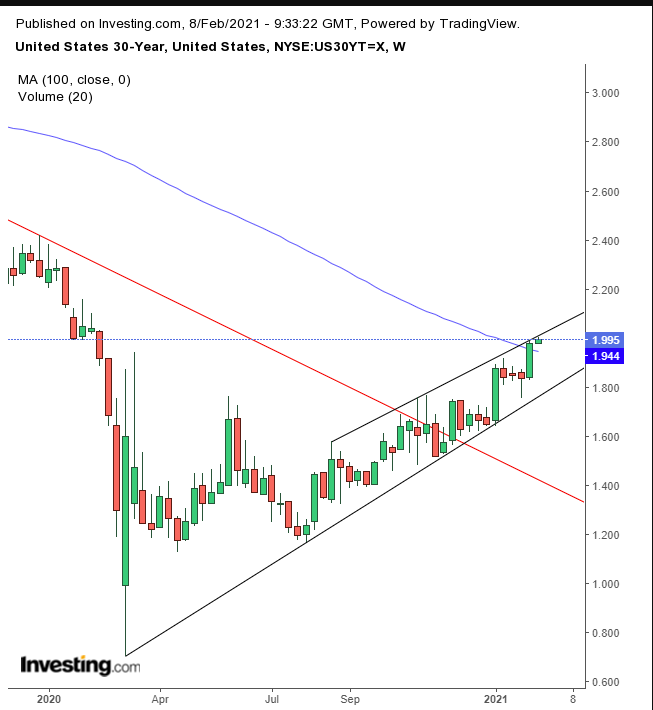 The 30-year yield extended an advance after crossing the 100-week MA and pressing against the top of a rising channel. Rates could fall back to 1.9% within a rising channel, before continuing higher. 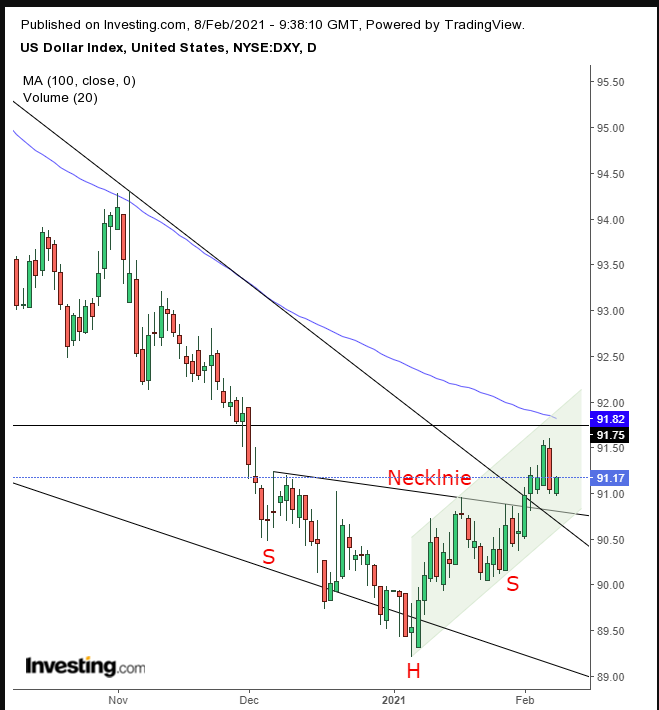 Dollar bulls may have taken profit after the jobs data as the price neared the previous trough, registered on Sept. 1, where the 100 DMA just so happened to show up.

That long position unwinding creates a return move after a pattern’s breakout, or in this case, two patterns: the small H&S and the massive falling wedge, within the rising channel since the Jan. 6 low. We expect the dollar to continue climbing.

The anticipation for reflation and the bullish market outlook makes an , both as an inflation hedge and as a haven. 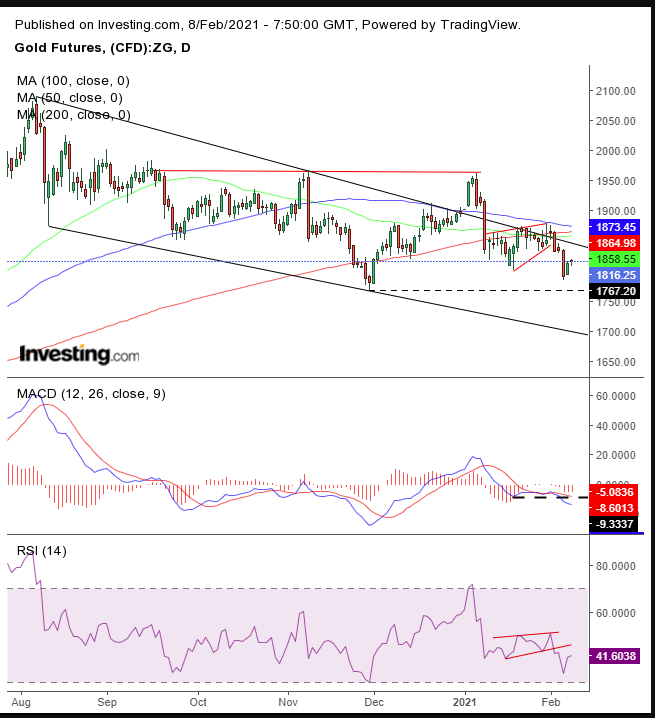 The price completed a bullish flag within a falling channel, suggesting the precious metal will fall lower. 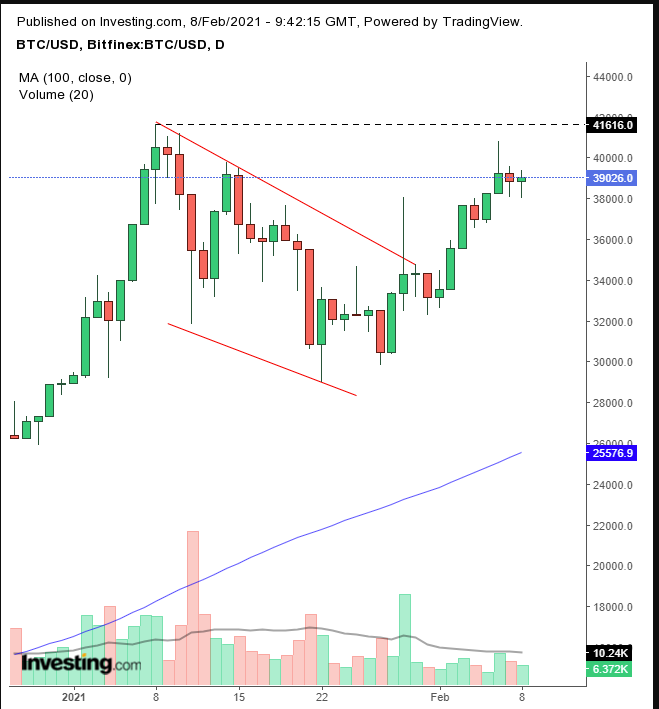 The price is struggling against the Jan. 8 record, while the bullish flag suggests a new one up ahead. Caution: the declining volume provides a negative divergence to the rising price.

Market expectations that the coronavirus vaccine will allow economies to reopen, and that any stimulus will revive spending helped develop a rising gap of 0.8%, its fourth rising gap in a row, within a six-straight rally.