US contracts on the , , and climbed in pre-US open trading on Tuesday, along with global stocks. Investors are placing their bets on a combination of coronavirus vaccine progress and a bumper level of additional US stimulus to reignite the economy.

Natural gas was in focus after freezing temperatures across much of the US left millions of Americans in the dark and cold.

Global stocks listed on the were on course to advance for the twelfth session in a row on Tuesday, the longest rally for the index since 2003, hitting yet another all-time high.

Contracts on the Russell 2000 outperformed, more than doubling lagging tech futures—as the cyclical rotation, or the reflation trade, resumed.

In Europe, the Index gained 0.2%, building on Monday’s 1.3% jump and hovering near a high for the year. The index was buoyed by mining shares. BHP (LON:) traded higher after it recorded its its best first-half in seven years and announced a record interim dividend. The world’s largest miner benefitted from strong demand from China. Commodities producer, Glencore (LON:) jumped 3.75% after it results and reinstated its dividend.

Asian indices extended a rally, though prices fluctuated, and some indices closed off their highs after news surfaced that China is considering blocking rare earth exports to the US, which would hurt American defense contractors, as rare earth minerals are critical to the industry.

Such a move could reignite a trade war with the US for the first time during the Biden administration, demonstrating that this particular conflict may be beyond party lines or personalities.

With China’s markets closed today for the Lunar New Year holiday, Hong Kong’s outperformed with a solid 1.8% gain to its highest since June 2018. The Asian financial hub reopened with a roar after the Chinese New Year; HSBC (HK:) and Standard Chartered (HK:) were among the top gainers, benefiting from the reflation trade. 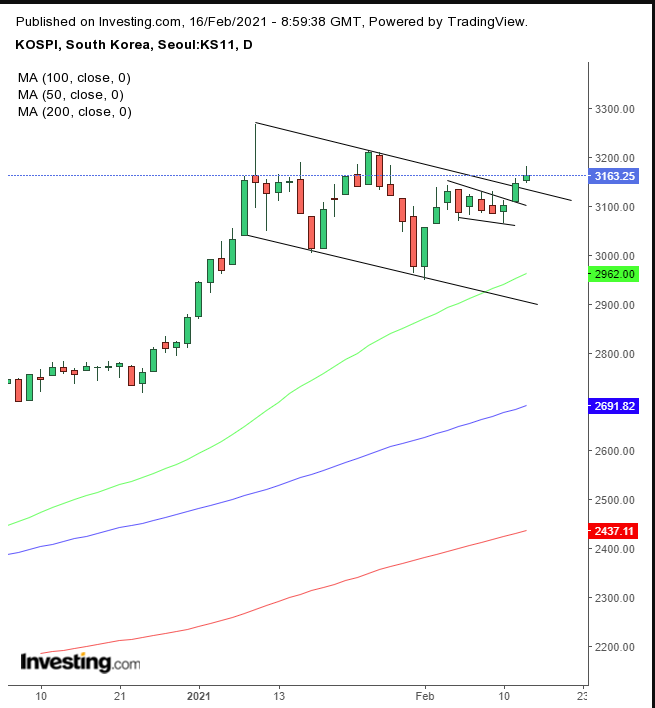 The price of the index completed a falling flag since the gauge’s Jan. 11 all-time high, after completing a smaller falling flag on Monday amid February’s trading.

The Treasury yield curve between the benchmark note and Treasury is around the steepest in over five years on rising hopes for stronger growth.

Yields on the note surged to the highest level in almost a year. Investors are selling bonds, in favor of newer issues amid an outlook for rising inflation. Rising yields are also an indicator that equities will keep moving higher. 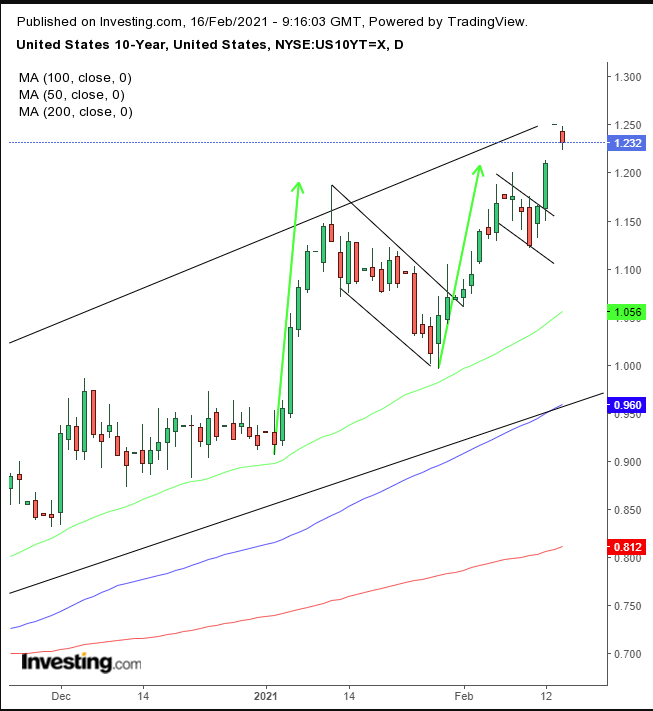 Rates are knocking on the top of a raising channel, threatening to catapult at a steeper trajectory, but will probably first retest the falling flag that propelled yields higher, the second in a row.

The fell, testing the bottom of a five-day range. 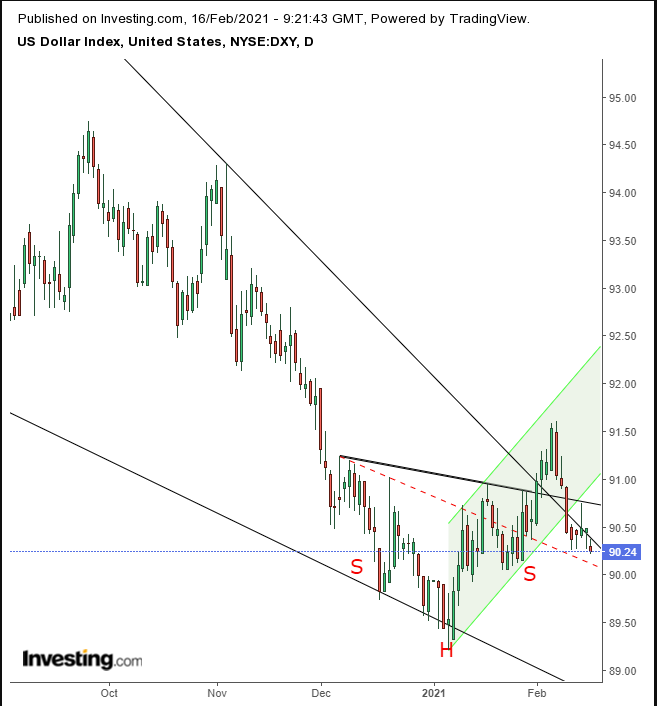 The greenback is struggling between a confluence of technical forces, a H&S bottom that provided an upside breakout of the falling wedge since the March high and the rising channel since the Jan. 6 low.

edged up on dollar weakness, breaking a three-day straight fall.

is up for the third day, demonstrating it has than taking the oppositional trade of the dollar.

While institutional investors are often called ‘smart money,’ as they know when to buy after a crash, they are only now coming around to the potential value of cryptocurrencies. A Morgan Stanley investment unit is investing in the digital currency leader. 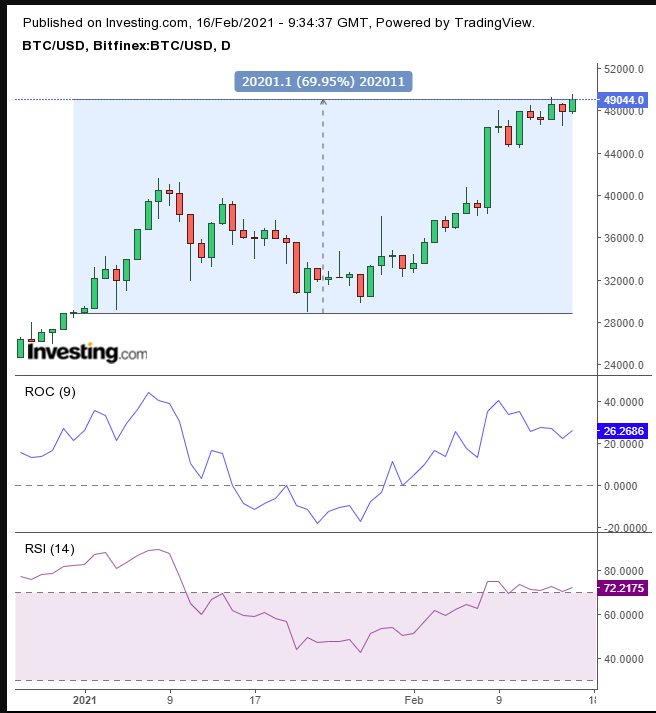 Both momentum measures for BTC, the ROC and RSI, were providing negative divergences, suggesting the rally was losing momentum, an early indication of a potential pullback.

fell back below $60, as after rare, freezing temperatures hit the Texas power system, crippling crude production. 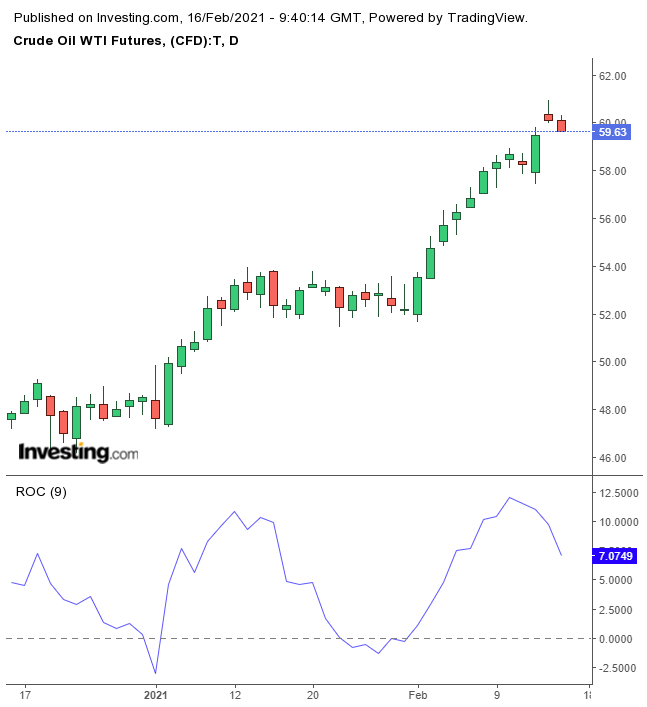 If the price of WTI falls below $59.50, it may complete an Evening Star—a three candle pattern denoting a top. Indeed, the ROC suggests the price may have topped out. 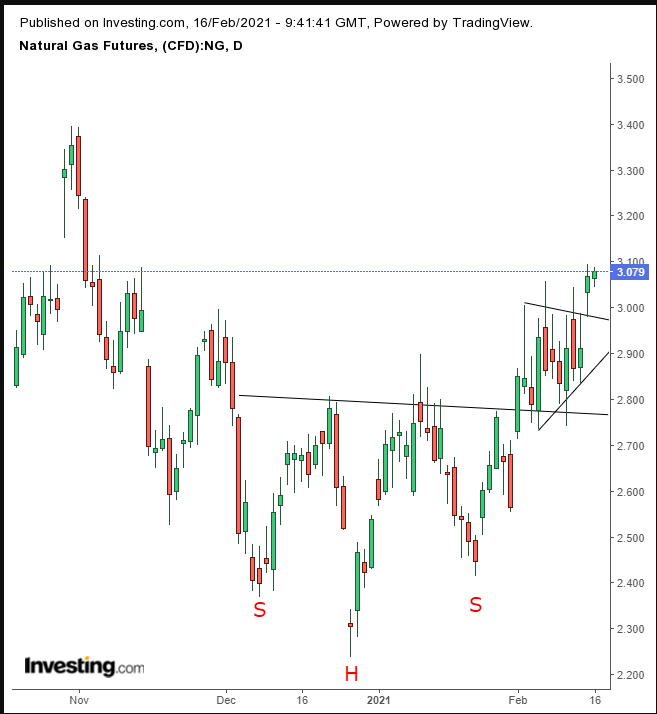 It completed a bullish pennant amid a return move that solidified a H&S bottom.