US futures on the , , and climbed higher in trading ahead of the US session on Thursday after Washington’s upbeat view on the US economic recovery was affirmed by the Biden administration. But stocks in Europe were lower amid uncertainty on the recovery there as coronavirus cases spike in Germany, France and Poland.

Bitcoin and gold were lower.

All four US futures were in the green—in contrast to the European decline after yesterday’s positive outlook from Federal Reserve Chair Jerome Powell and Treasury Secretary Janet Yellen. Both sides of the reflation trade—contracts on the tech heavy-NASDAQ 100 and small caps on the Russell 2000 were outperforming. Value stocks in American domestic firms, however, doubled the gains of growth shares in the biggest tech companies.

The cyclical rotation also reversed in Europe on the news of extended lockdowns and as the EU prepares to block exports of the AstraZeneca (NASDAQ:) vaccine to other countries in favor of its own member states. The Index edged lower driven by oil and gas and retail stocks, which suffer when people stay at home, and banks, as the ongoing closed economy is expected to ensure rates remain low and financial transactions are reduced.

Investors have been buying German bunds, pushing yields lower for the fifth day in a row, as it recorded its largest increase in virus cases since Jan. 9. 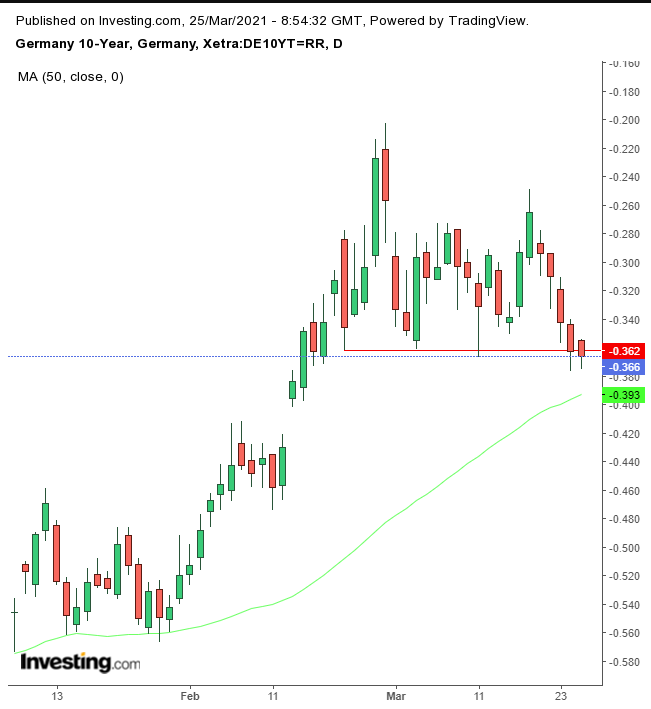 The yield is on the verge of bottoming out.

Regional woes were exacerbated with another diplomatic crisis. The EU and US  China on human rights violations and the SEC it might delist some of the biggest Chinese firms from US exchanges, driving Chinese tech shares lower.

But the tension is not only between the largest global economies. Sweden’s H&M (ST:) stock also declined after Chinese online retailers stopped ordering the retailers products following a social media backlash to the fashion chain’s refusal to buy Xinjiang cotton.

Adidas (OTC:) was also hit by a Chinese boycott, dropping more than 4%. 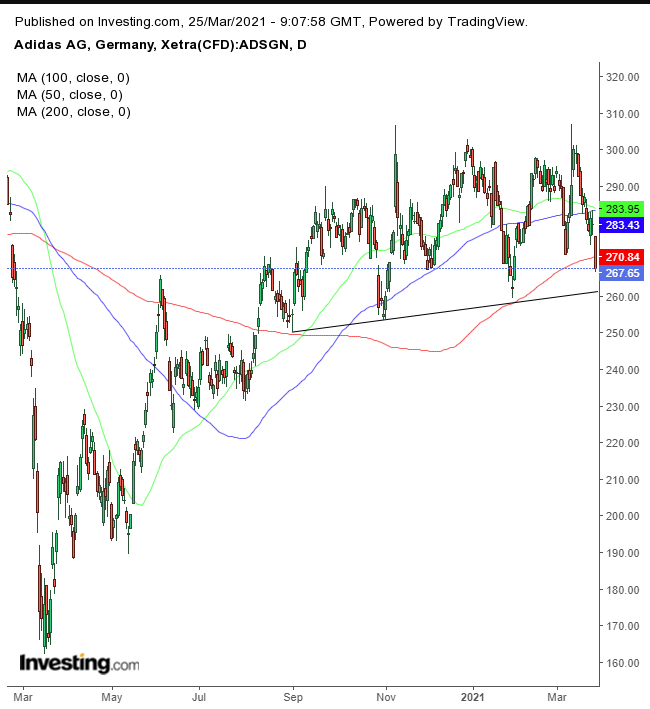 Shares in the sports apparel retailer crossed the 200 DMA for the first time since climbing over it in August, threatening a top.

In London, movie-theater chain, Cineworld Group (LON:) slumped 10.5%, after it its first annual loss of $3 billion for 2020, and said it will seek approval from shareholders to increase its debt ceiling.

Shares in Asia were mixed after Wednesday’s Chinese tech company selloff on Wall Street. Stocks on the and the were in the red, but only slightly, about 0.1% down. Japan’s outperformed, rising 1.1%, with paper & pulp, railway & bus and real estate.

On Wednesday, US stocks on both sides of the reflation trade tumbled. In mirror image to today’s futures, the underperformed, falling 2.35%, while the declined by half, 1.7%.

Yields on the Treasury note struggled amid a rebound, during a technically sensitive juncture. 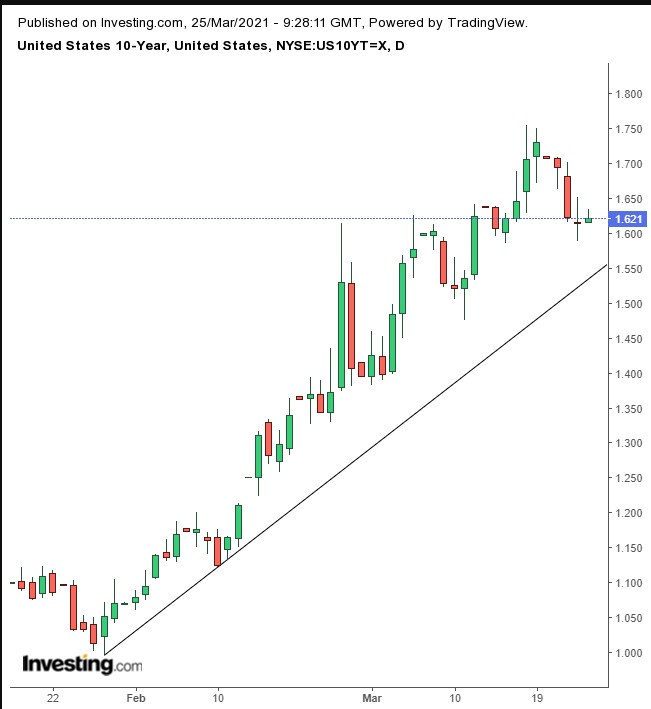 After Wednesday’s down gapping High Wave doji following a long, red candle, having neared the uptrend line, if today’s candle is green and digs deeply into Tuesday’s price action, it will complete an Evening Star.

The extended a rally to its third straight day, or to its fifth out of six days. 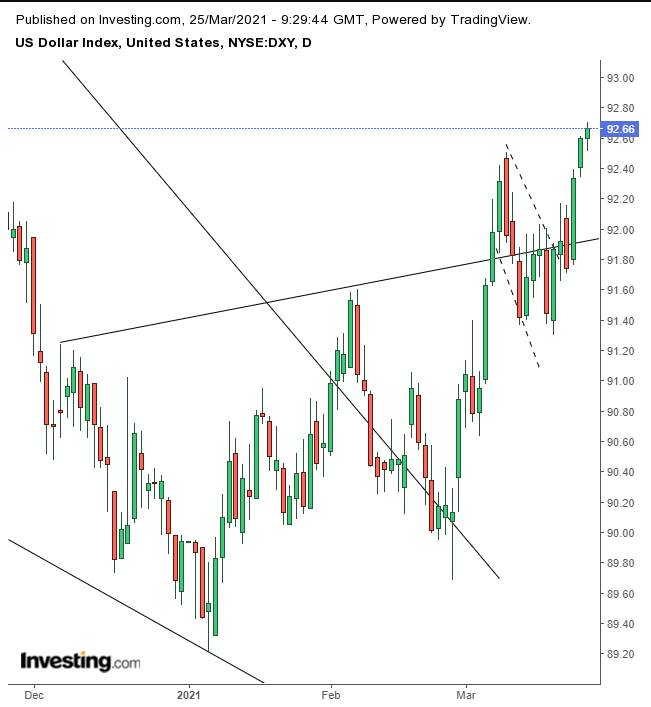 The recovery confirms the bullish nature of the preceding flag, which strengthened the view for a double bottom, rising out of the falling wedge since the March top. 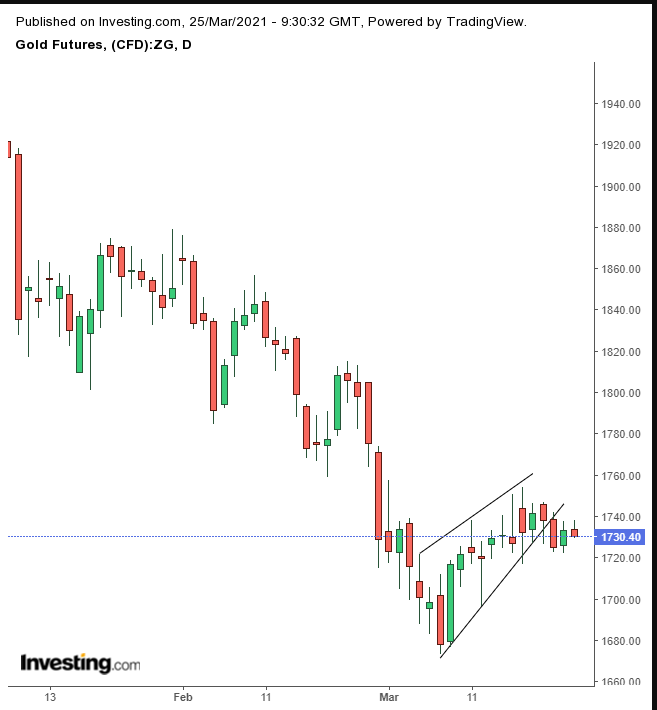 investors have received mixed signals over the last few days. Tesla (NASDAQ:) CEO Elon Musk tweeted that you can now buy a Tesla with Bitcoin, while Ray Dalio, a founding partner of Bridgewater Associates, the world’s largest hedge fund, said there is “good probability” that the cryptocurrency will be outlawed, while Fidelity has applied to start a fund that tracks cryptocurrencies. 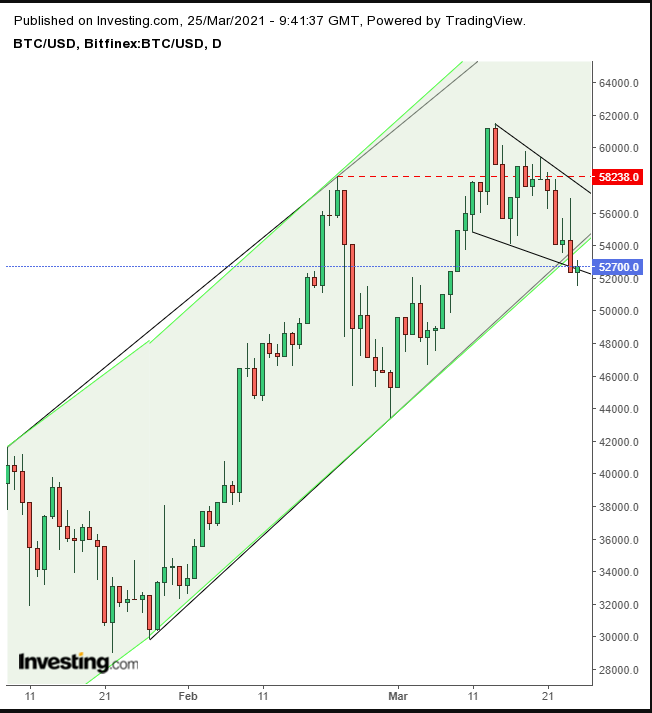 Meanwhile, Bitcoin hangs on the edge of the technical knife. It found support and has been at the bottom of a bullish flag.

retreated after a surge during a blockage of the Suez Canal. 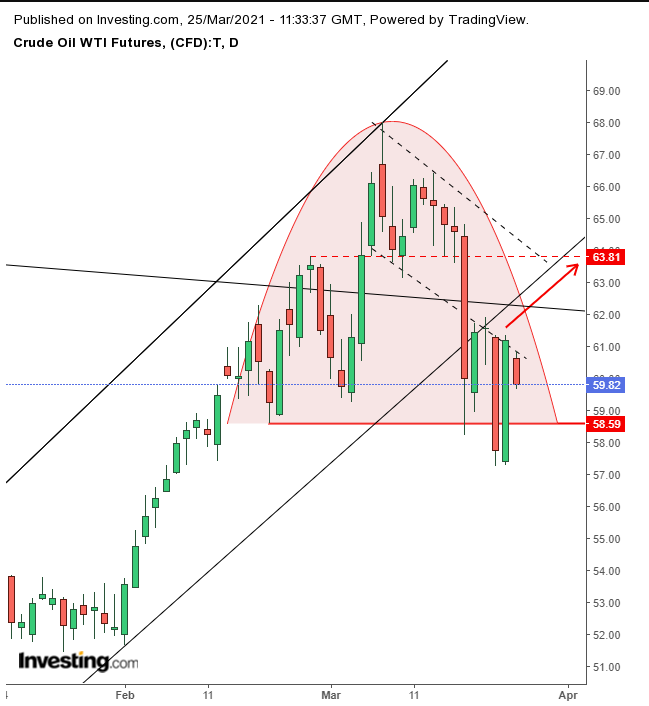 We the decline to be technical, as the resistance of a blown out flag, with the price finding this resistance for the fifth day along side the angle of the failed pattern.