US contracts on the , , and , and global stocks were lower on Tuesday amid ongoing political uncertainty. In Europe, negotiations on the Brexit divorce arrangement between the UK and EU continue ahead of the Dec. 31 deadline. In the US, Republicans and Democrats still have not reached agreement on an additional coronavirus aid package.

Meanwhile, as the UK begins its COVID-19 , virus infections and deaths continue their upward spiral. The US has now recorded the most coronavirus related deaths in a single week.

After stock markets across the globe reached new highs last week, the risk-on narrative has now turned sour. New York governor, Andrew Cuomo warned that indoor dining might soon close if hospitals are overwhelmed with coronavirus cases; Hong Kong is implementing some of its strictest restrictions ever, including ending dining in restaurants at 6pm, shutting gyms and beauty salons, while Germany’s Health Minister said the government there is considering tightening restrictions again, to stop the virus spreading.

NASDAQ futures were down in pre-US open trading this morning but had posted the smallest drop of all four contracts as the technology sector continues to outperform when stocks retreat, while value sectors lead the rallies.

In Europe, the index was extremely volatile, wavering between red and green at the time of writing.

The retreated along with optimism on a divorce settlement for the third day as hopes are fading that there will be a Brexit deal. UK Prime Minister, Boris Johnson is to visit Brussels today and meet with European Commission President Ursula von der Leyen in an attempt to find a compromise.

A could drive a rally in sterling, as could the successful roll-out of the UK’s COVID-19 vaccination program, as the rest of the world looks on.

Most of Asia was lower. South Korea’s underperformed, closing down 1.6%. A virus spike provided the impetus for investors to cash out after five consecutive record-breaking sessions. Foreign buyers were also staying on the sidelines on the lack of US stimulus progress.

In the US, energy, real estate, and financial firms—sectors that perform poorly when lockdowns are in effect—led the decline on Wall Street. As well, chip maker Intel (NASDAQ:) was an outlier in the tech sector, plunging 3.4%, ending a nine-day rally, after media reports emerged that Apple (NASDAQ:) would start shipping a series of new Mac computers with Apple processors as early as spring 2021. 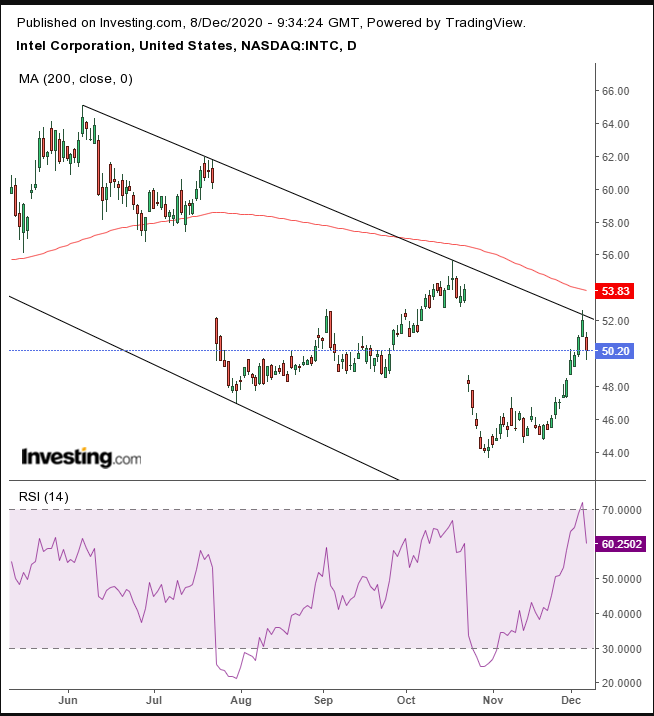 The price fell away after a failed attempt to break free of a falling channel, strengthened by the 200 DMA. The RSI suggests that momentum will lead prices to retest the $44 level.

The was little changed after USD bulls’ first effort to buy the dip on Monday, when the RSI reached the most oversold condition since August. 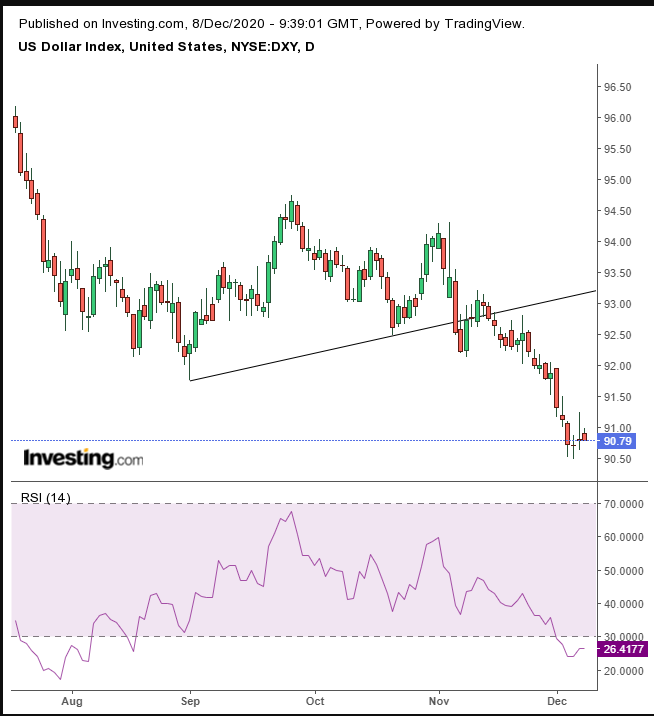 Still, it might be a good time to remember that despite a brief rally, the greenback kept selling off, even when the momentum-based indicator fell in late July to 17, the lowest in years.

Treasury yields, including for the note, were slightly lower as the moves to center stage on Thursday. Most economists expect the central bank to its pandemic bond-buying program.

is up, even if just slightly, for the fifth day out of six, finding resistance by the 50 DMA. 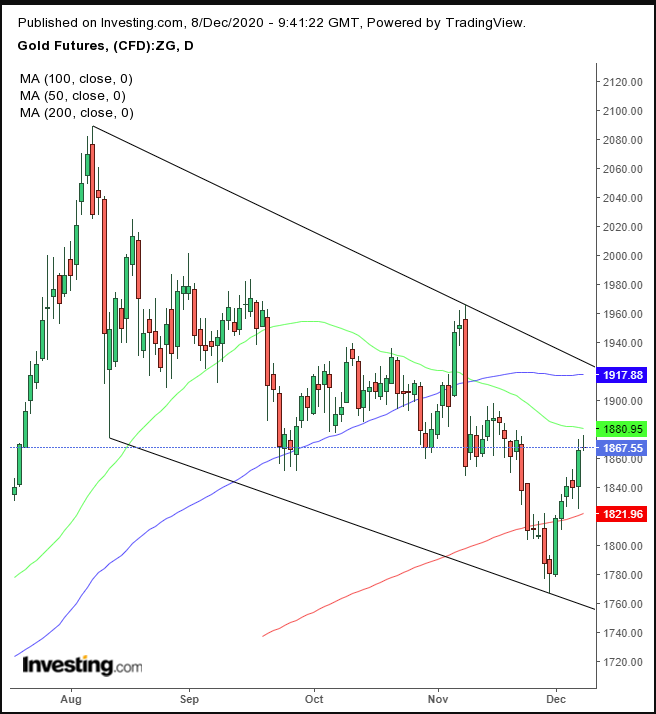 While the price bounced back above the 200 DMA, the rebound came from the bottom of a falling channel, whose topside is bolstered by the 100 DMA and points to a continued decline.

fell for the second straight day—its first such dip since Nov. 26—which dragged the price below $17,000. 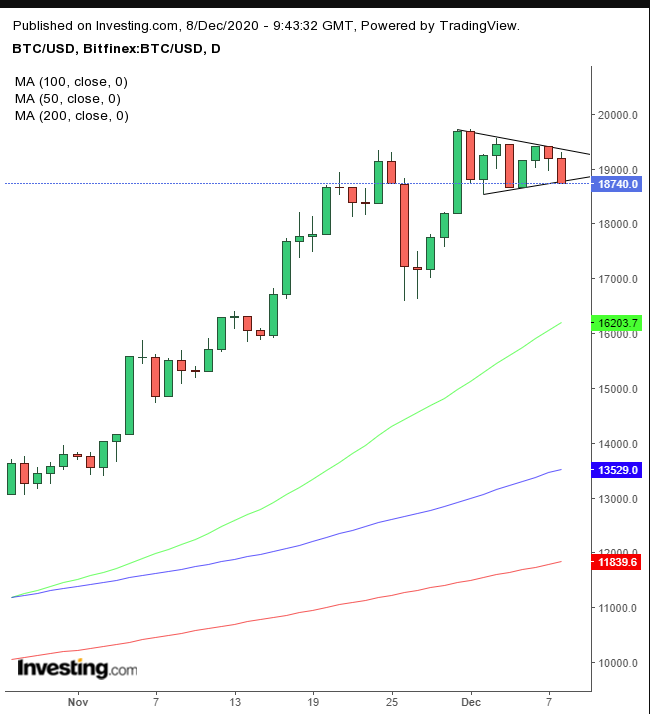 However, as far as we’re concerned, the price is ideally situated for a contrarian, long position finding support at the bottom of a bullish flag.

declined for the second day in a volatile session. 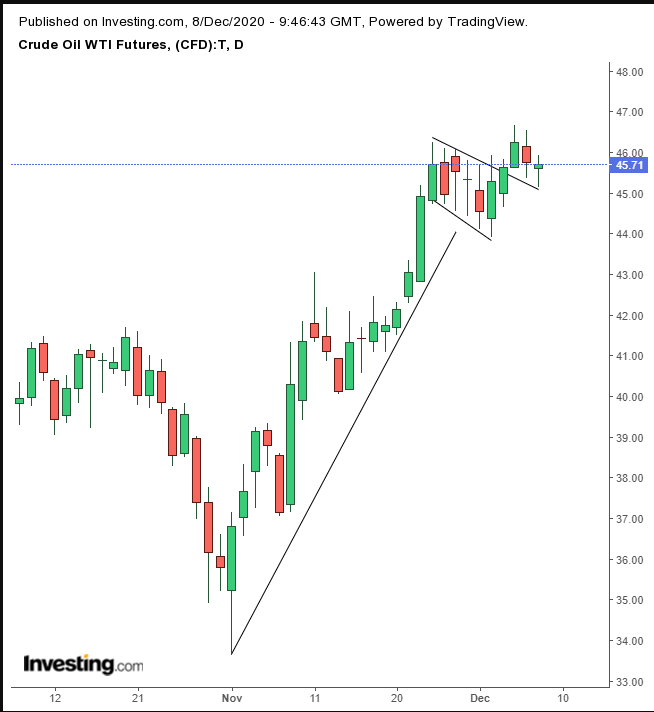 The bulls are absorbing all available supply, after gobbling up all contracts within a bullish flag, which signals the resumption of the underlying uptrend.