US futures, including for the , , and , and European stocks started the week on the right foot, opening higher on Monday. Positive news regarding economic stimulus negotiations in Washington and Brexit talks in Brussels, as well as the of COVID-19 vaccines across the US has boosted markets.

The dollar faltered and gold remained under pressure.

Investors remain hopeful that a fiscal aid package is in the cards as a bipartisan group of lawmakers to unveil a $908 billion coronavirus spending bill to Congress on Monday. However, approval from lawmakers is by no means a forgone conclusion.

Even after global stocks posted their first weekly loss in six last week, the supply-demand balance remains bullish as investors seem to be able to see past a multitude of risks. Stocks have hit at a time when uncertainty is arguably the highest it has ever been in most investor’s lifetime.

It will be months until the global population is fully inoculated against COVID-19 with frontline health care workers and residents of long-term care facilities as the initial priority. The Wall Street Journal warned that the pandemic will not end “anytime soon” as both New York and Germany introduce new restrictions due to a spike in local cases. In New York, indoor dining has been and Germany has a full lockdown until at least Jan. 10.

On a positive note, the head of the US government’s vaccination program that it would be available to as much as 80% of the population by next summer.

However, a number of concerns remain, including: the vaccine may give a false sense of security, only exacerbating the rate of contagion, as people become lax with masks and social distancing; that some people will refuse to be inoculated on concerns that there are some unknown side effects of the drug. There is also little concrete evidence on how long the vaccine will provide immunity against the virus and whether the logistics of distributing vaccines will be met successfully.

Contracts on the NASDAQ were lagging other US indices on Monday, ahead of the US open, while futures on the Russell 2000 outperformed, extending the cyclical rotation from tech to value, as well as from large to small caps.

European shares jumped this morning on optimism for a Brexit deal with the Index opening higher, nearly wiping-out Friday’s losses, which sealed the first losing week in six.

The UK’s rose for the 9th day, and the surged 1.3%. If it closes at this level it will be its largest gain in nearly two months. The pound’s strong advance .

Asia was mixed, with China’s , (+0.7%), outperforming the region as the country reorganizes its benchmark to replace financial and energy firms with three technology companies. The reshuffle will more accurately represent the country’s retail-dominated market and is designed to attract new passive funds and foreign investors.

Japan’s rose 0.3% on improving business sentiment. The country’s —the main gauge representing large manufacturers—advanced to -10 from -27.

US stocks trimmed losses before the close on Friday after lawmakers passed a stopgap funding bill to avert a government shutdown, followed by an announcement from President Donald Trump that vaccines will be administered “within 24 hours.” Though US markets still closed mostly in the red, traders locked themselves into risk over the weekend.

Yields, including on the Treasury, jumped. 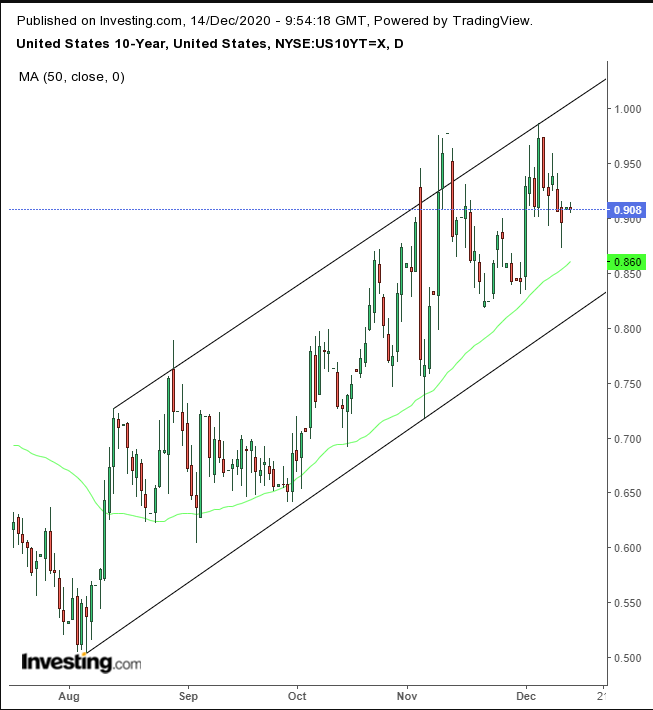 The bounce was off a hammer, after nearing the 50 DMA that has been supporting the bottom of a rising channel since the August bottom

Progress on a stimulus package does not bode well for investors, as pumping more cheap money into the economy reduces the currency’s value. 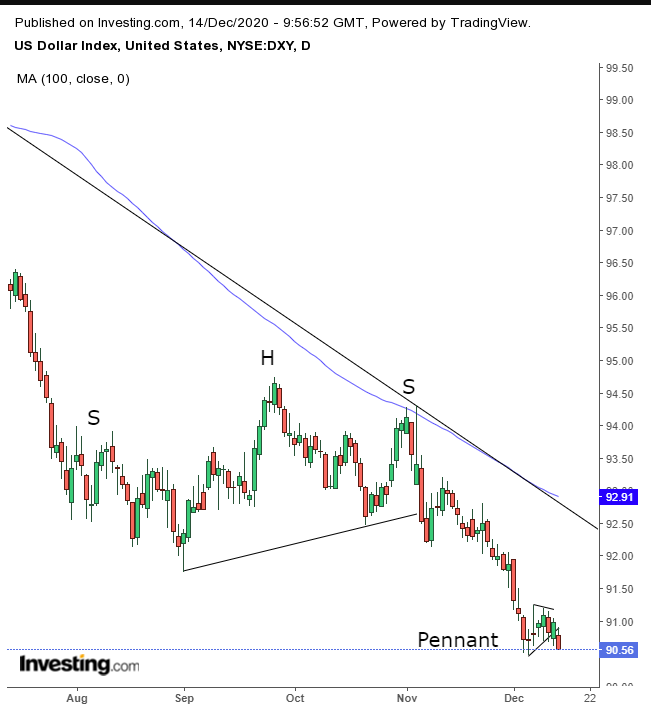 The decline completed a pennant, bearish after the preceding drop—the second continuation pattern, after the H&S of August to November.

fell for the third day in four, despite the greenback’s weakness, as investors continue to rotate back into risk assets.

The yellow metal is retesting the 200 DMA, which it has been trading at all week, while the 50 DMA weighs on the commodity, after the 50 DMA crossed below the 100 DMA, which is reinforcing the top of a falling channel.

, which some say draws investors away from gold, is little changed. The cryptocurrency is finding resistance by the top of either a continuation pennant or ascending channel. 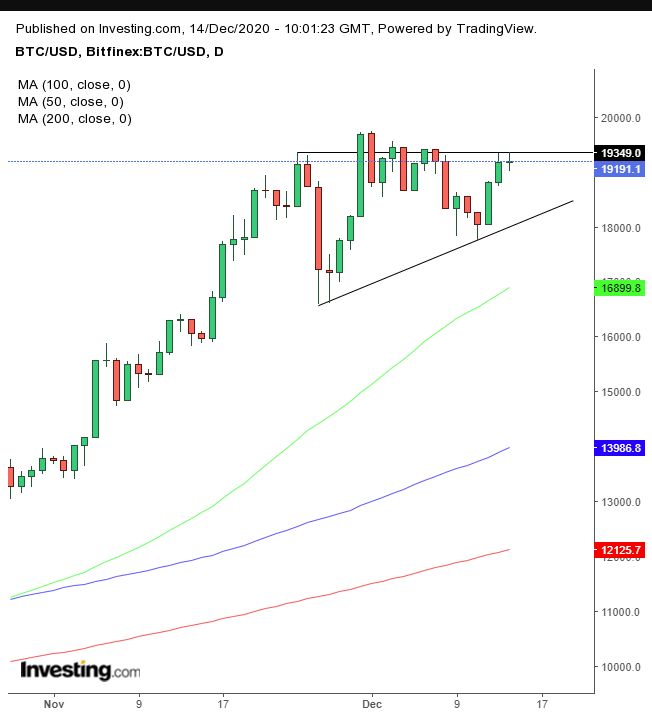 An upside for the digital token would signal a resumption of the uptrend, past the $20,000 level, an event which will surely catapult the digital currency even higher.

reached $47 after another in the Middle East, raising concerns about stability in the region. 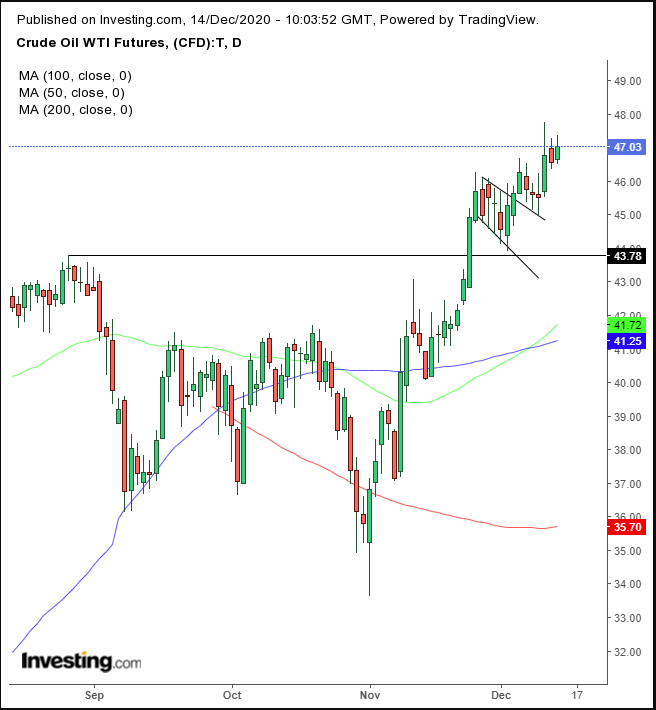 WTI resumes its underlying uptrend line after a pause in the form of a bullish flag.