US futures contracts on the , , , and European stocks advanced for the third day in a row on Wednesday. Investors have grown confident in market stability after concerns that the volatility caused by the standoff between hedge funds and retail trader would topple the broader market. Earnings beats from Amazon and Google reinforced the positive outlook.

However,  futures were trading in the red. Gold and the dollar rebounded.

A strong earnings from Alphabet (NASDAQ:) on Tuesday after the market closed, which included a 42% increase in revenue and a 45% increase in earnings, was driven by its search engine and YouTube, as well as Google Cloud gaining momentum.

The Amazon (NASDAQ:) results  included the news that founder and CEO, Jeff Bezos is stepping down, and Amazon Web Services CEO Andy Jassy, will be elevated to the top job in Q3.

The move suggests the world’s largest retailer might set its sight on overtaking Microsoft (NASDAQ:) as the world’s top cloud services provider. However, Bezos said he was stepping down to focus on new products and push along new initiatives, boasting that they have “things in the pipeline that will continue to astonish.”

The current narrative is that the reflation trade is driving the market. Reflation trades typically comprise companies sensitive to economic cycles, which have underperformed during coronavirus lockdowns, that would benefit from economic stimulus. This group includes small caps, as well as energy and financials firms. However, the tech sector, which includes stocks that have excelled amid social restrictions, is actually leading the current reflation rally. 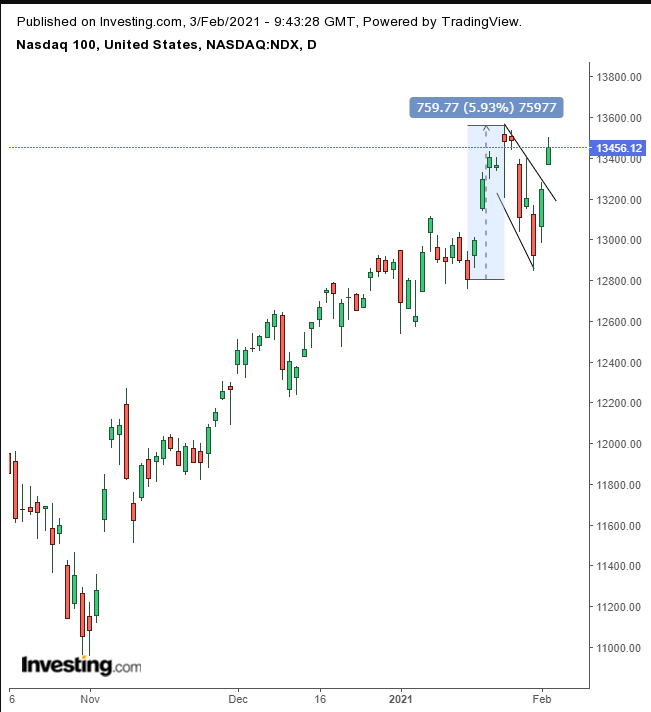 In Europe, the Index climbed 0.9%, with all the major sectors in the green. Germany’s gained 0.8% with Siemens (DE:) jumping 1.8% after it first-quarter expectations and increased its outlook for 2021. The company recovered from the pandemic more quickly than anticipated.

South Korea’s was up 1.1% after regulators extended a ban on short selling to May 2, following the country’s Reddit version rebellion in which retail traders bought up the most shorted shares, including biopharmaceutical Celltrion (KS:). China’s fell 0.5% on profit taking of highly valued tech stocks, offsetting strong guidance for Chongqing Changan Automobile Co Ltd (SZ:).

US shares posted back-to-back gains on Tuesday as the retail trading hype ebbed away. Every sector was in positive territory, with financial and industrial firms driving the index higher, making the case for the cyclical trade.

United Parcel Service (NYSE:) rose after a surge in profits, and Exxon Mobile (NYSE:) climbed on its to safeguard dividends. GameStop (NYSE:) and AMC Entertainment (NYSE:) crashed over 41% as speculative trading dissipated. Silver also fell from its eight year high.

Yields, including on the Treasury note were higher. 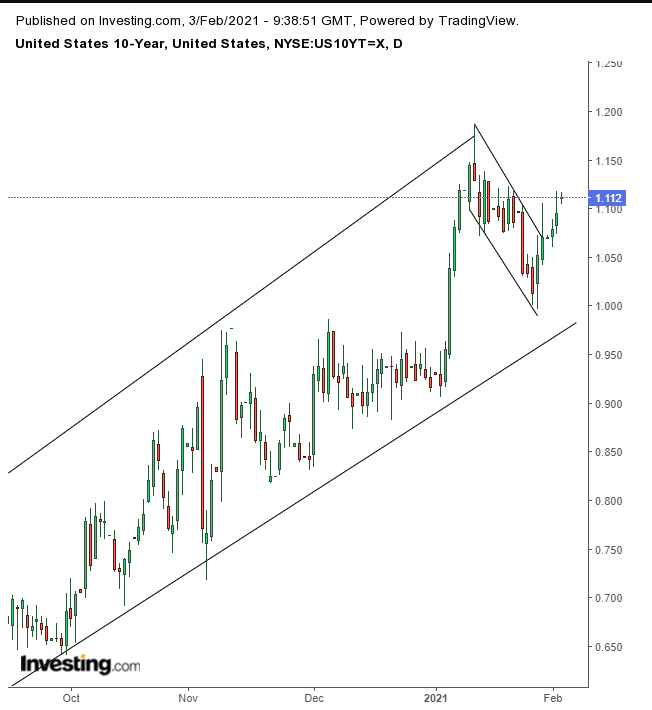 The move extended the upside breakout of a falling flag within a rising channel.

The recovered from a dip. 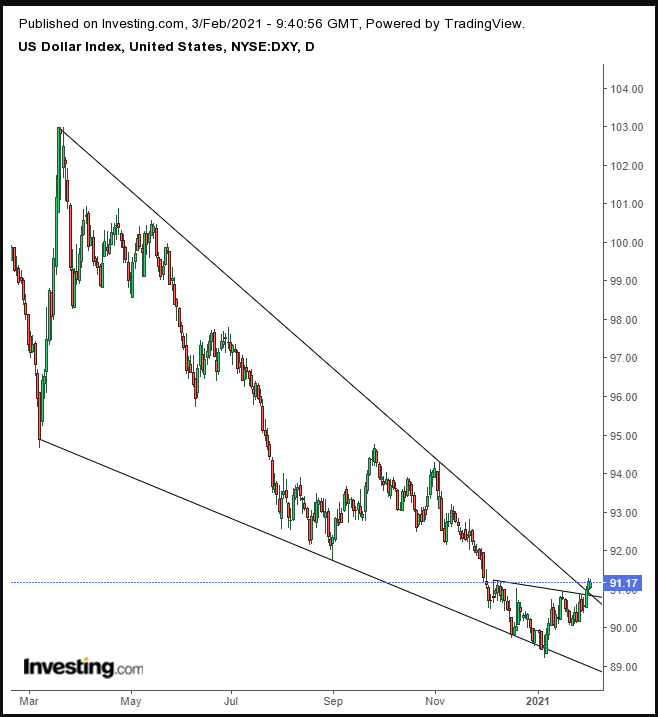 The greenback simultaneously completed a H&S bottom and a bullish wedge.

rebounded from the bottom of a rising flag, despite dollar strength. 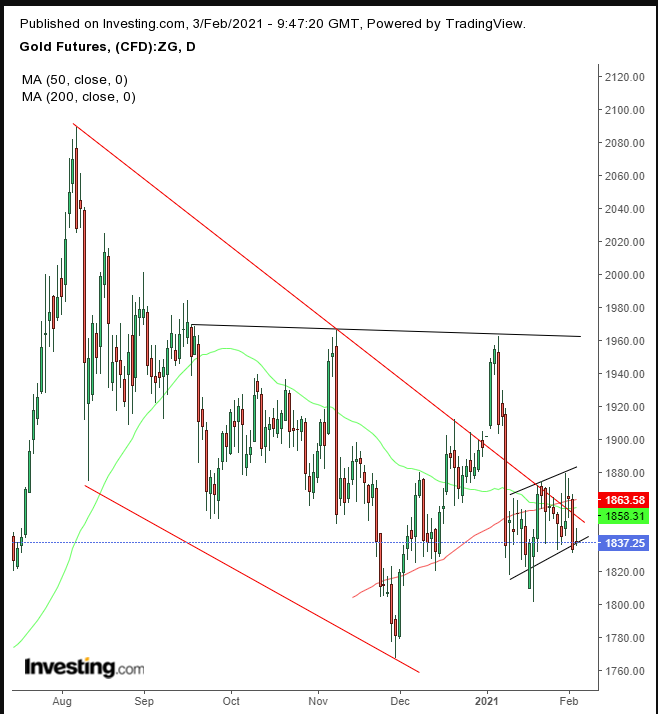 The yellow metal struggled within a confluence of technical pressures —Death Cross amid the bearish flag, after it fell back into its falling channel, while it still might step up to a H&S bottom.

completed a powerful, bearish evening star at the resistance of the August highs, while still within a rising channel since the December bottom. 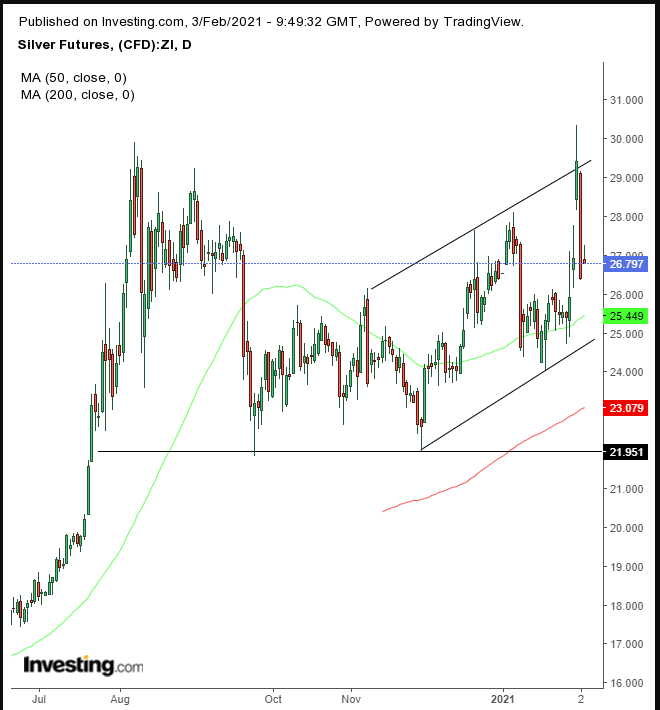 A fall between the September and November low would complete a double top for the white metal.

formed an intraday shooting star on its third straight rise. 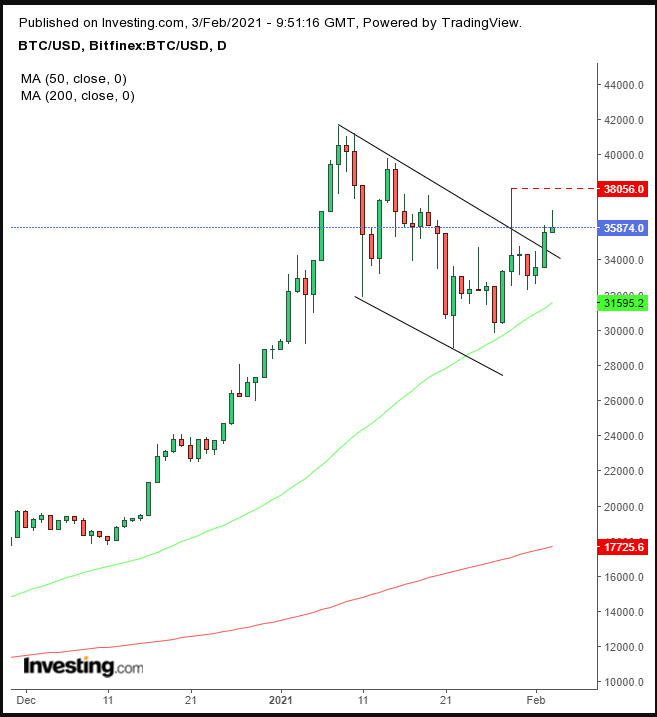 The cryptocurrency will complete a bullish flag, once the price clears the Jan. 29, much longer shooting star.

extended an to the third day, completing a falling flag, like bitcoin.