The global rally in stocks that paused on Wednesday appears ready to resume during Thursday’s Wall Street session, based on pre-US open futures trading. Contracts for the and , were led higher by futures, while futures were in the red. Investors continue to remain positive following strong corporate results and the decision by Democrats to go it alone in passing their $1.9 trillion coronavirus relief plan.

The story of the equity market’s oscillating cyclical rotation is currently being displayed via US futures trading. The rally, which began in November, was led by stocks sensitive to the economic cycle. These sectors were the ones that plunged during the COVID-19 lockdowns, as investors moved capital into technology and other sectors that benefited from the work-from-home environment.

The “reflation trade,” which benefits shares in companies that will do well in the post-pandemic environment resurfaced recently since the expected fiscal stimulus, combined with the ongoing monetary easing, will spur economic growth and benefit businesses that suffered during the lockdowns. Meanwhile technology shares suffered.

But what we’ve been seeing recently has been a a whipsawing version of the reflation trade. Tech has been leading the rallies when market leadership shifted out of the cyclical trade. But on Wednesday, the outperformed during the US session, at least at first.

However, by the close it was in the red, while small caps—which excel during an economic recovery—posted the best results. This morning, however, perhaps ominously, tech futures are leading and contracts on US small caps are lagging, trading in negative territory at time of writing.

The Index pushed higher with energy shares amid mixed earnings results. Deutsche Bank (DE:) wiped out earlier gains even after the German lender posted annual for the first time in six years. Global household and personal products giant Unilever (AS:) dropped after it analysts’ expectations on restructuring charges. 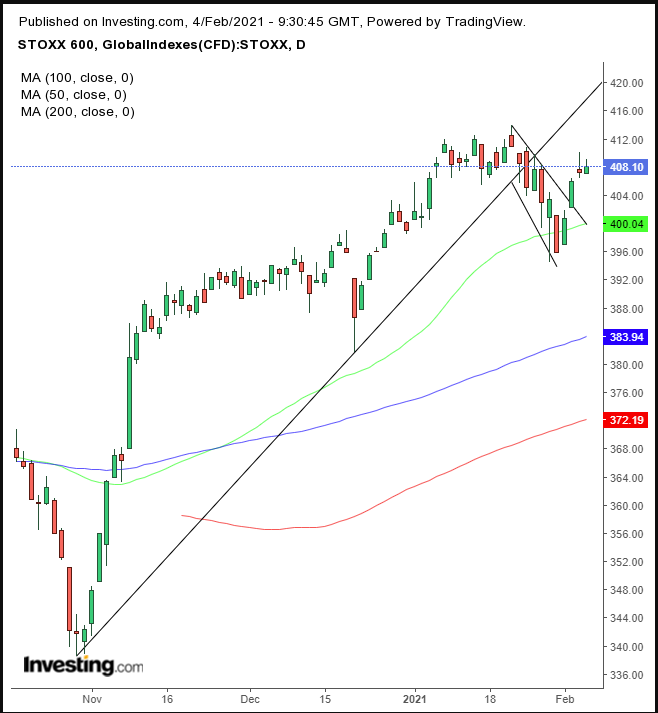 The pan-European Index rebounded from a lower open, but at the time of writing, appeared to have found resistance by yesterday’s shooting star, after falling below the uptrend line since Oct 29. We don’t consider the previous decline as a bullish flag because it was preceded by a sideways move, rather than by a climactic uptick.

Earlier today, Asia was red across the digital board, as the pandemic’s impact appears to have weighed on sentiment moreso than in the West, where the vaccine rollout is well underway. On the other hand in Asia, only China seems to be on top of that critical initiative.

Japan’s dropped 1.1%, while South Korea’s lost 1.4% of value, underperforming the region. China’s declined by only 0.4%, which might confirm the apparent lack of vaccine preparedness was indeed the reason for regional declines.

Yesterday, the majority of US stocks listed on the managed to stop a retreat, after the broad benchmark’s biggest two-day rallin in nealy three months. Energy and financial shares outperformed amid the cyclical rotation, outpacing tech, even after Alphabet (NASDAQ:) posted a record high on .

Amazon (NASDAQ:) slumped altogether. However, it kept in play, even providing an extraordinary entry point from a risk-reward perspective. 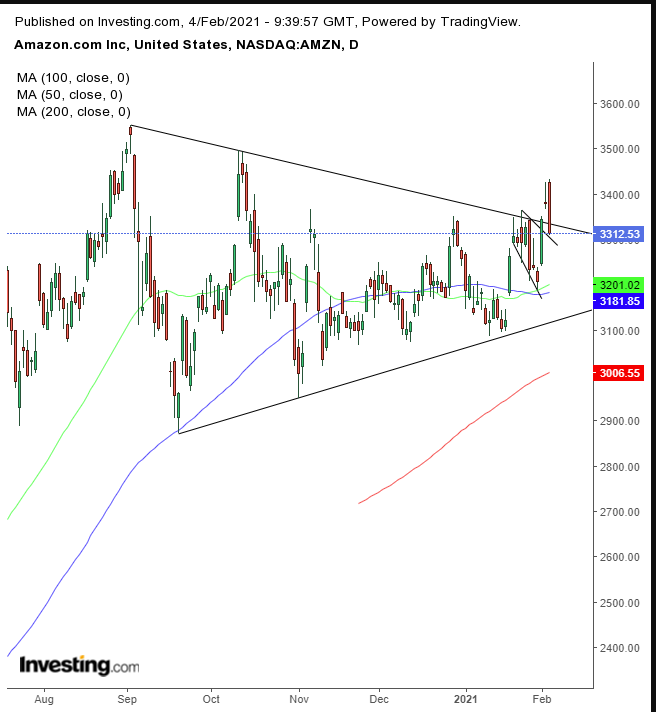 The e-tail giant found support by a bullish flag, at the top of a symmetrical triangle.

, on the other hand, which was also in Reddit trader crosshairs, extended a decline.

Yields, including for the benchmark note, took a breather after Treasuries are sold off in anticipation of new issues with higher interest rates. 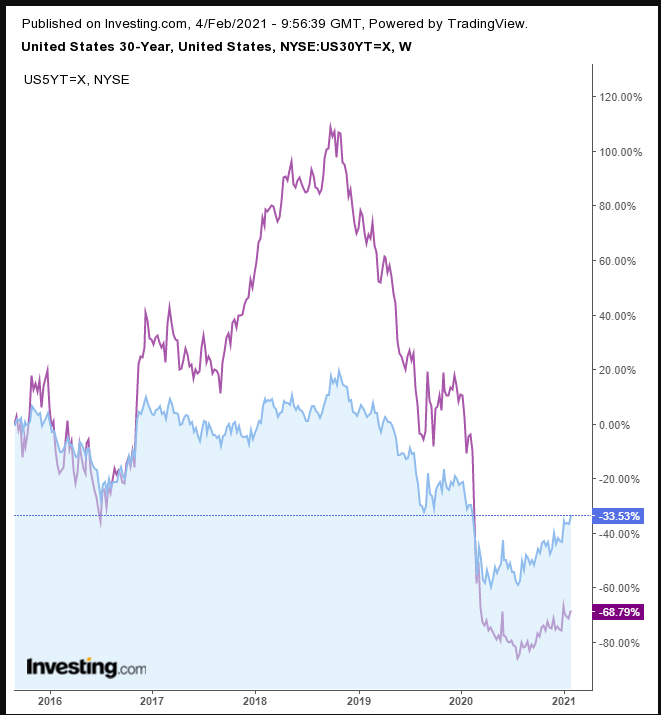 The Treasury yield is treading near its highest level in a year, while the gap to yields—a leading growth indicator—reached its steepest level in nearly five weeks on Wednesday.

The extended a dual upside breakout of a small H&S bottom and a massive falling wedge. 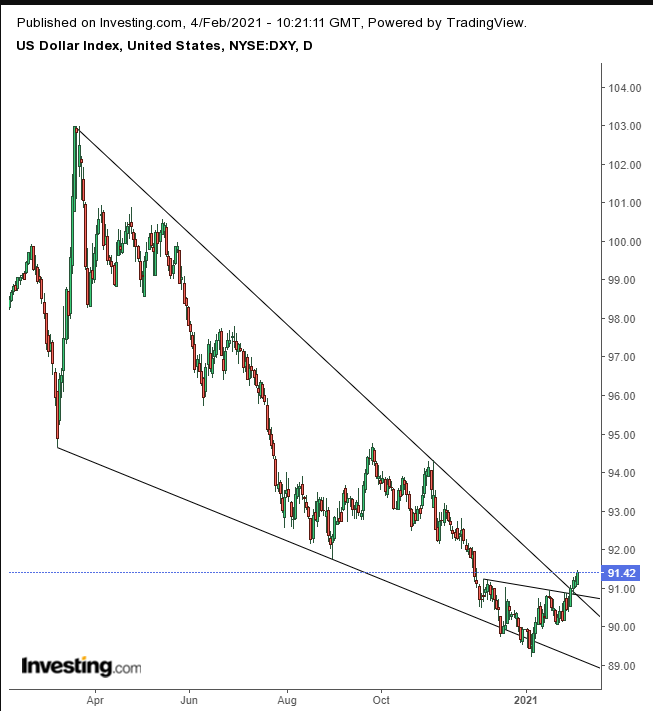 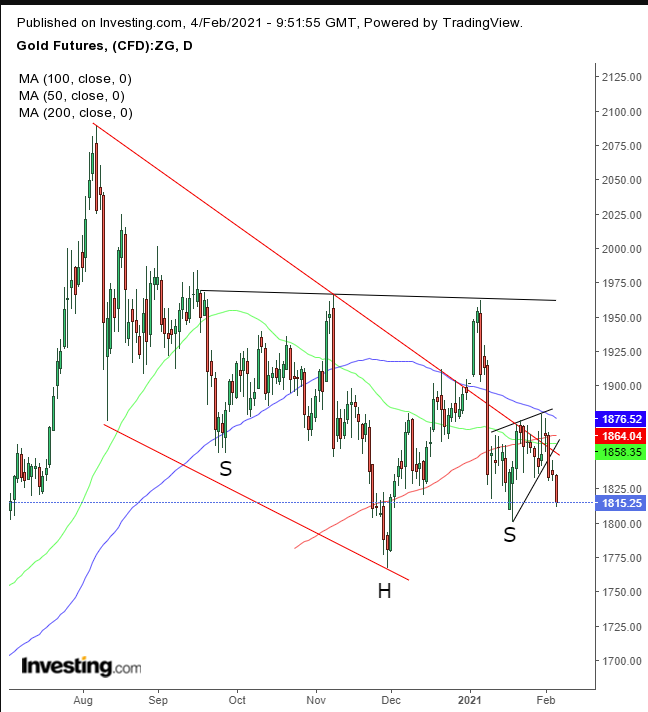 The yellow metal was propelled deeper within a falling channel, which is lowering the odds for a H&S bottom.

retreated from a four day advance. 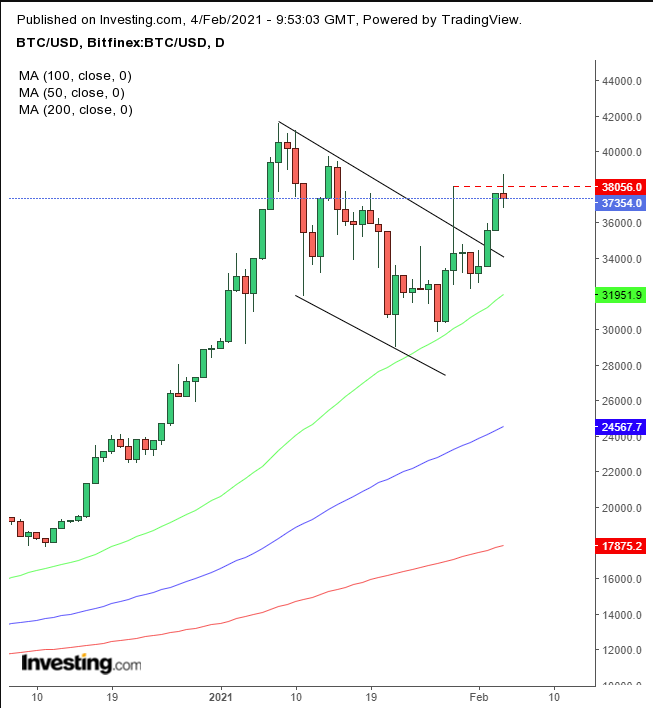 The drop helped the cryptocurrency complete a falling flag, finding resistance by Friday’s shooting star. Its decline could trigger some in lower prices alt-currencies.

extended an advance to the fourth straight day as OPEC+ announced it will resume clearing the pandemic’s surplus.