Statements from two Federal Reserve officials on Tuesday dispelling expectations that the US central bank would reduce quantitative easing anytime soon failed to lift equities in pre-US open trade on Wednesday. Futures on the , , and all traded lower, having hit record highs in early January.

Both gold and the dollar traded higher.

Stocks in Asia were mixed, with China’s (-0.25%) leading the declines among the major regional benchmarks due to concerns on rising virus cases in northern China as well as heightened tension in US-China relations. Sources in Washington say that President Donald Trump is still adding Alibaba (NYSE:) and Tencent (NYSE:) to the China investment ban.

Japan’s (+1%) outperformed, extending a bull run to its fifth session in a row and hitting a 30-year high thanks to a rally in semiconductors on expectations of a strong recovery in the industry.

American shares crawled higher on Tuesday on conflicting coronavirus news. COVID-19 has reared its head again in China, and Sweden has announced tighter restrictions to reduce the spread of the virus while the ongoing vaccine rollout is still expected to facilitate the world moving on from the pandemic.

However, the story of the day was Treasuries, after Federal Reserve Bank of St Louis President James reiterated that the only policy on the Fed docket right now is getting the economy through the pandemic, with the same message repeated later by Boston Fed chief Eric .

What is surprising, however, is that these statements did not prompt investors to increase risk or buy equities. Rather, they bought Treasuries. After all, investors should be happy to know that the Fed is avoiding repeating the 2013 “taper tantrum,” when the Fed began unloading its fattened spreadsheet, sending a ripple of panic that markets would collapse.

Also, falling yields should alleviate concerns of rising inflation and how that might affect any economic recovery from the worst recession since the Great Depression.

Is cheap money no longer enough to keep pushing stocks higher? Investors may have found themselves unsure what do amid the cacophony of headlines as the Democrats move to impeach President Trump for the second time.

The divide among Americans identifying with the two political parties has deepened, and the fallout can be seen on social media—both Facebook (NASDAQ:) and Twitter (NYSE:) banned Trump, while Google (NASDAQ:), Amazon (NASDAQ:) and Apple (NASDAQ:) cut off Parler, an app conservatives were migrating to even before the Trump ban.

Yields, including on the note, gapped down—a rarity recently—after yesterday’s shooting star developed when rates failed to breach the top of a falling channel. 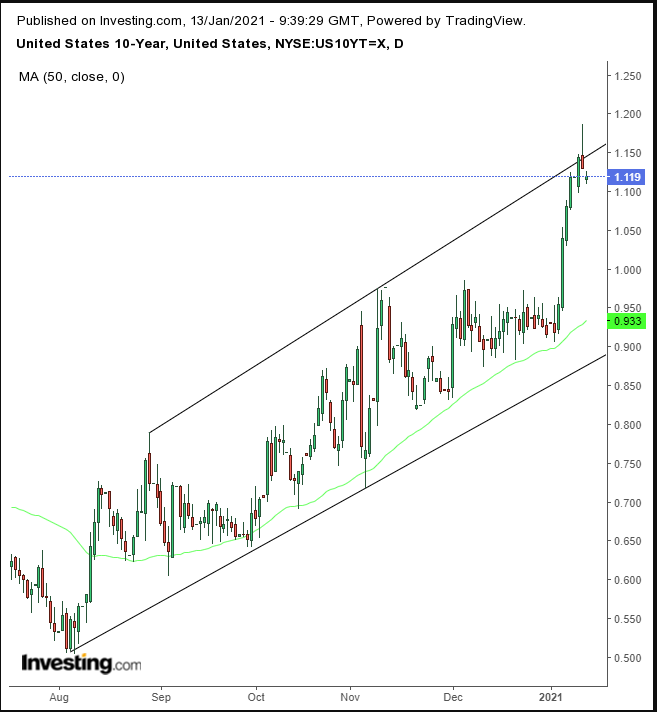 Yields are likely to return toward the bottom of the channel, whose technical significance is underlined by the 50 DMA.

The rebounded from a second-day loss to gain slightly. 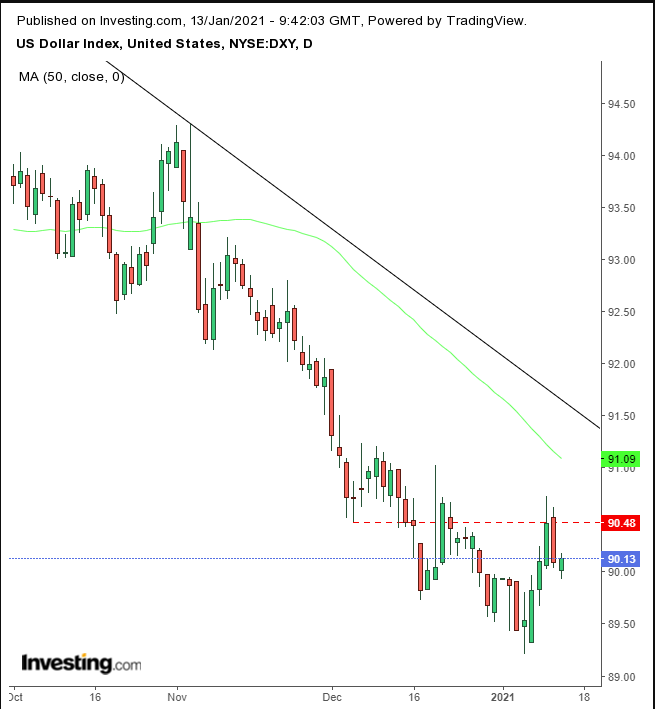 Yesterday, it completed a bearish engulfing pattern, having neared the supported-resistance zone since Dec. 3 and the 50 DMA “guarding” the falling trendline.

is squeezed between the 50 DMA resistance and the 200 DMA support. 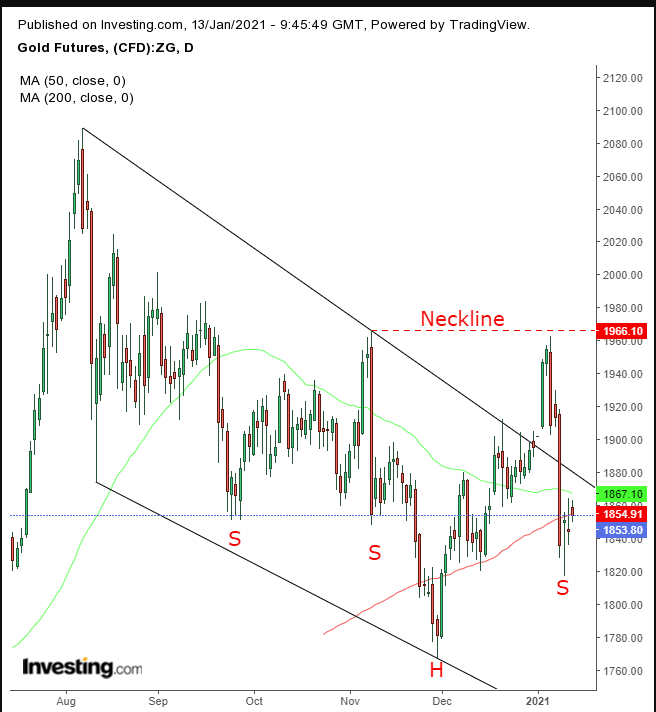 The yellow metal is struggling between the resistance of a falling channel in place after it hit its first record since 2011, during August 2020 and a potential H&S bottom.

found its footing on the support of Monday’s hammer, above the uptrend line since the Dec. 12 low. 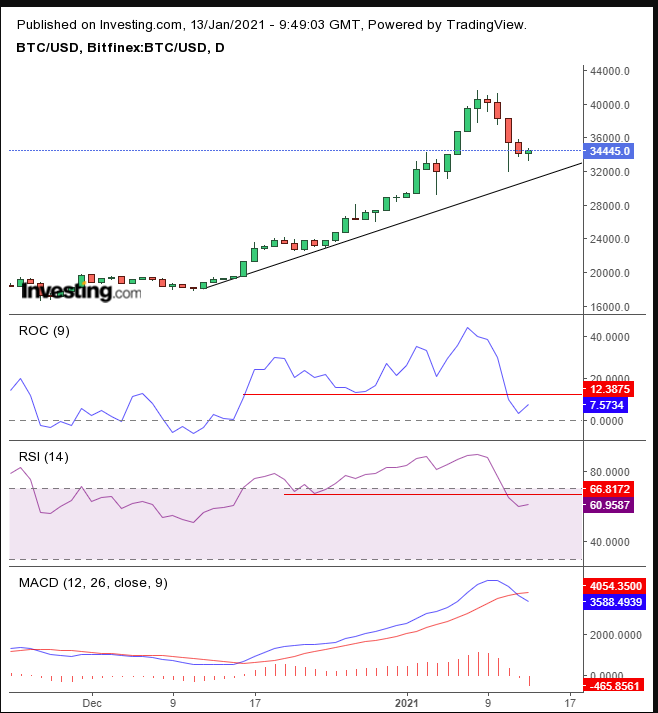 Although the cryptocurrency’s price and volume indicators provided sell signals, we still consider it a buying dip that provides an attractive risk-reward ratio if the timing is right.

is on course for its longest upward streak in two years, after it neared the $54 level, for the first since Jan. 24—well before the pandemic hit markets. 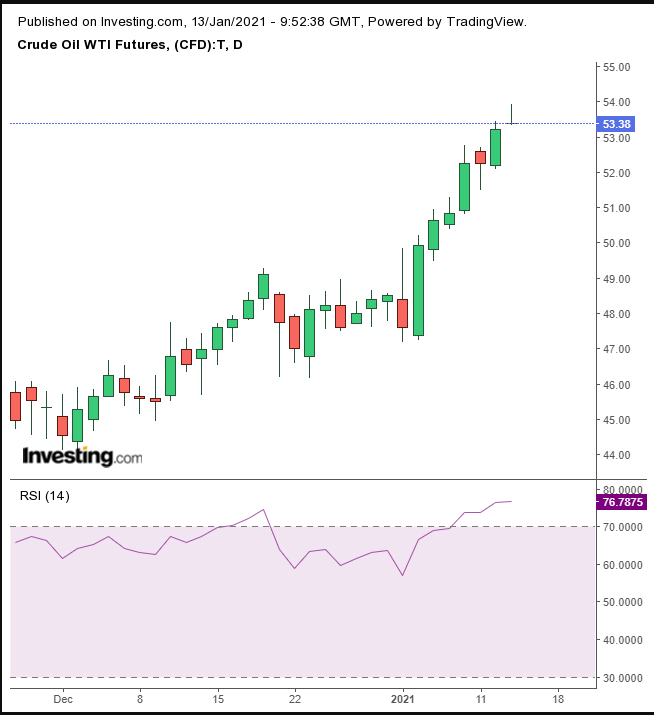 On the other hand, if the price closes at this point, it will have created a shooting star, while the RSI is the most overbought since April 2019.