We begin the week near record highs, and major indices climbed the proverbial “wall of worries” to get here. From most of the things being reported, you’d think the market was getting absolutely annihilated, but the more people worry, the better it gets.

The (SPX) managed a record high close Friday after posting an intraday record high of 3960 on Thursday. That peak represented a 6% gain from earlier this month when inflation worries helped drag things down.

Those concerns haven’t gone away, obviously, and pre-market trading turned from positive to mixed as the open approached. But a “buy the dip” mentality and passage of fiscal stimulus appeared to bring things back last week.

It’s also positive that the Treasury yield is off its highs this morning and inoculations appear to be going very well. It’s not a single thing, it’s a few things together. Meanwhile, don’t expect to see an end to all the negative sentiment out there. We’re in a market that, like a famous comedian, gets no respect.

This week looks like a busy one, so the question is whether investors will continue to gravitate toward stocks as attention turns back to interest rates and consumer demand.

Heading into the final weeks of Q1, we have lots of ground to cover. Everything from a Fed to “quadruple witching,” to key earnings and data. There’s never a dull moment.

The Fed’s Federal Open Market Committee (FOMC) meets tomorrow and Wednesday, and although no rate moves are expected, the market’s been on edge lately every time Fed Chairman Jerome Powell steps to a microphone. He does it again after the meeting, and focus could be on anything he says about inflation.

Earlier this month, the market dove when Powell said inflation could possibly rise, but probably only temporarily. It’s hard to believe he’d change his tune on that just a couple of weeks later, but be prepared for possible sharp moves up or down depending on what he says and how he says it.

What’s more interesting is what the FOMC might say about where it sees interest rates going in the long run. Wednesday’s meeting brings us the first updated “dot-plot” since December, which plots where Fed officials expect rates to go over the next few years.

It’s nothing in stone, but it could give investors a sense of when, if ever, the Fed sees rates starting to rise again. Tomorrow we’ll look back at what the last dot-plot said so you can be prepared for any changes Wednesday.

Over the next day or two, you might see trading calm a bit as investors await the word from Powell and company. Sometimes stocks trade in a narrow range in the days leading up to a Fed meeting. If things seem boring, you can blame that.

Once the Fed is out of the way, investors brace Thursday afternoon for earnings reports from FedEx and Nike (). Both are important economic barometers and not just for the U.S.

NKE has a big presence in China, so its report gives investors a closer look at consumers there (China’s also in the news this week for other reasons—see below). We’ll talk more about these key earnings reports in the coming days.

Before that comes the week’s biggest data— for February due tomorrow morning. January saw explosive 5.3% growth in this dataset, but the February number might be a little less shiny considering the possible impact of those ugly winter storms across a lot of the country.

Leading categories of retail sales in January included furniture, electronics, and automobiles, so it could be useful to dive deeper into the data tomorrow and see if those trends held in February. Analysts expect a drop of 0.6% from January, according to Briefing.com.

Despite the mixed market action Friday, the Cboe Volatility Index () finished below 21, falling toward longer-term lows before ticking up slightly this morning. This was kind of odd considering how weak the NASDAQ () performed that day and the rise in yields.

Consider watching VIX closely today for any change in direction. It’s at a level where it’s frequently bottomed this year, and a turnaround in VIX often means shaky times for stocks. Intraday volatility has been a fact of life this year, and could continue. Having said that, VIX is now below the 23–30 range it had been trading in, so maybe the tune is changing.

Volatility could tick higher toward the end of the week because Friday is quadruple witching day. That’s the third Friday of the third month of each quarter when contracts for stock index futures, stock index options, stock options, and single-stock futures all expire.

At every expiration, you should have a heightened sense that there might be more movement at the open or close as people unwind baskets of stocks or futures. On quadruple witching, you have to be more aware. In other words, anyone trading Thursday and Friday may want to keep position sizes smaller than usual and take extra care.

Tech stocks limped to the finish Friday as the bond market continued to set the tone. When the 10-year Treasury yield fell below 1.5% mid-week, the COMP drove higher. When yields jumped above 1.6% on Friday to new one-year highs, the Tech rally dissipated, though to be fair the COMP did close Friday well above its intraday lows.

Also, some analysts think lower prices for some of the big Tech stocks like Tesla (NASDAQ:), Apple (NASDAQ:), and Microsoft (NASDAQ:) might set them up for some bargain hunters. We’ll have to wait and see. The COMP just had its first positive week in the last three.

Considering the yield rise, it’s kind of interesting that Utilities had a strong week. Typically this sector is one of the most yield-sensitive ones in the market, and comes under pressure when bond yields rise. Higher yields often mean investors jumping out of dividend sectors like Utilities and into fixed income.

The Utilities move last week came after the sector was one of just two to lose ground over the previous three months (Staples was the other). Maybe this shows investors looking to buy in some ragged parts of the market now that the ones beaten up last year (Financials and Energy) have come back so strongly. NextEra Energy (NYSE:) was a strong Utility sector performer Friday.

Technically, it feels like we’re on better footing than a week ago. The SPX managed to slice through key resistance at 3900 to new highs last week. The ($DJI) also set a bunch of record highs as investors looked for the stimulus to drive more economic growth. The $DJI drew support from Boeing (NYSE:), which had an incredible week thanks in part to reopening vibes and solid order growth. It’s now at its highest level since before COVID. 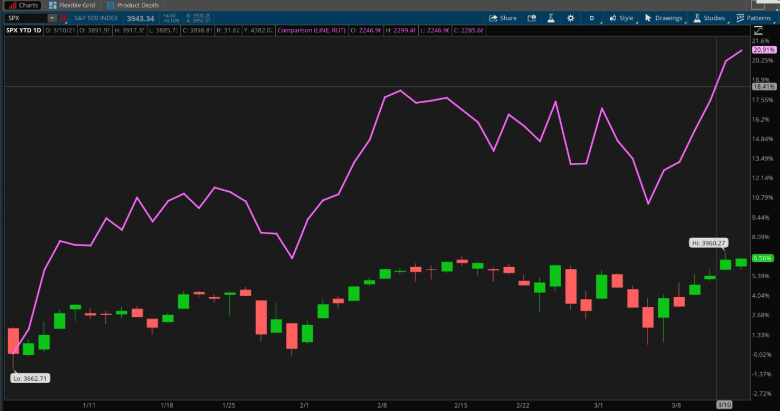 Chart Of The Day: Just What You’d Expect

We talk a lot here about the market doing things no one expects it to do, so it’s sometimes reassuring to see things going in directions that reflect historic trends. For instance, this year-to-date chart shows the small-cap Index (RUT—purple line) easily outpacing the S&P 500 Index (SPX—candlestick).

This is in line with what economists say about stimulus spending and economic recovery tending to help smaller, domestic companies more than multinationals. Data sources: S&P Dow Jones Indices, FTSE Russell. Chart source: The thinkorswim® platform. For illustrative purposes only. Past performance does not guarantee future results.

In the wake of President Joseph Biden signing the stimulus last week, you don’t have to look too hard to find pundits worried about the federal debt. How easily the market digests the huge debt load over coming weeks and months has a lot to do with where the market ultimately goes, and we saw Friday how yield-sensitive the growth stocks continue to be.

Having said that, people seem to be getting comfortable with a 10-year yield of 1.4% to 1.6%—a range it’s traded in over the last two weeks. If the yield starts knocking on the door of 1.75% or 2%, that could be a different story.

However, as one analyst said last week, a 2% yield might be OK with investors if it’s for the right reasons—meaning strong jobs growth and robust gross domestic product (GDP). Getting inflation back to the Fed’s 2% target level might also be seen as positive, at least if there’s a way to keep it from getting out of hand.

The proverbial “soft landing” is what investors are probably hoping for, while fears of 1970s-style inflation are never far from many peoples’ minds, especially if they lived through those times.

Banks in Vanguard Ahead of Q1 Earnings

It’s still a month until earnings season, with big banks in the pole position. If there’s a segment likely to surprise to the upside with Q1 results, don’t count banks out of the picture. While services industries may continue to struggle in 2021, banks could outrun expectations.

Banks have adapted in the last decade and found a way to generate record profits during a period of historically low interest rates. With rates starting to rise again, banks could be flooded with profits.

The financials in some respects have a great runway, and investors haven’t ignored that. Year-to-date, the sector is up more than 16%, second only to Energy.

JP Morgan Chase (NYSE:) shares are up nearly 25%, and Goldman Sachs (NYSE:) is up 31%. What could potentially spoil the party? Well, rising mortgage rates are a possible speed bump for banks with more exposure to the housing sector.

Also, if more Americans keep saving money instead of using their credit cards, that could hurt financial firms with lots of exposure to the payments business—think of credit card and mobile payment companies like PayPal (NASDAQ:) and Square (NYSE:). Personal savings as a percentage of disposable income hit 20.5% in January, down from last year’s peaks but still close to all-time highs, according to the St. Louis Fed.

All that saved up money could be a boost for retail companies, some analysts say, and more money is arriving now thanks to the stimulus. Some of that may go into savings, and some might get invested. But a lot of people on the middle-to-lower end of the economic spectrum have suffered incredibly this last year.

They need to pay bills, but they also might need to use the stimulus money for essentials they’ve put off buying. This doesn’t just mean shopping trips to Walmart (NYSE:) and Target (NYSE:), though obviously the big retailers could benefit. It also means potential big-ticket items. A $1,400 check might make it possible for someone to finally replace that old refrigerator or dishwasher.

If that’s the case, companies like Whirlpool (NYSE:) or Best Buy (BBY)—neither of whose shares have exactly lit up the Street over the last six months—might be beneficiaries.

The thing to remember about retail is that it’s hard to put the whole sector into a single shopping bag. Right now, the best performers seem to be the ones that make things people will use when they go back to work. Sweatpants, on the other hand, are losing steam. LuLuLemon (NASDAQ:) fell more than 1% Friday and is down year-to-date.