After a blistering recovery from the pandemic-induced recession through Q2 and Q3 of last year, the US labor market has downshifted sharply. Over the last three months, the report has shown total job creation of just 86k jobs, a pitiful pace of less than 30k net new jobs per month.

Despite the lackluster employment figures of late, economists are optimistic that the US economy will start to accelerate sharply in the coming months as vaccinations pick up and another (likely) stimulus bill gets approved by Congress. For the month of February, economists are anticipating a 185k reading in onfarm payrolls, with average hourly earnings expected to rise 0.2% m/m again this month. 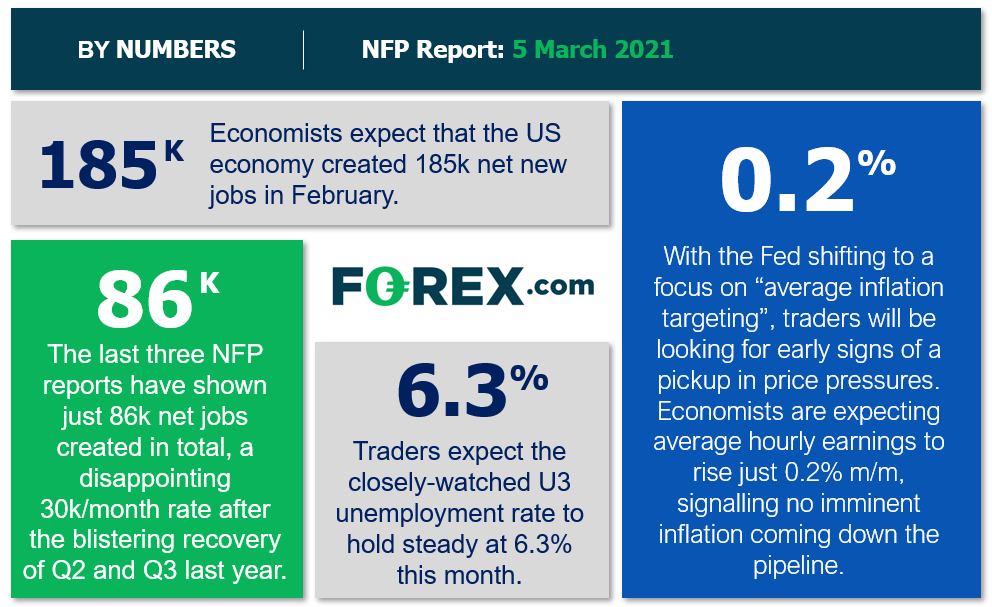 As we’ve noted repeatedly over the last few months, traders should take any forward-looking economic estimates with a massive grain of salt given the truly unparalleled global economic disruption as a result of COVID-19’s spread. That said, weighing the data and our internal models, the leading indicators point to a worse-than-expected reading from the February NFP report, with headline job growth potentially coming in somewhere in the 50-150k range, albeit with a bigger band of uncertainty than ever given the current state of affairs.

After getting walloped through the last three quarters of 2020, the US dollar has stabilized against its major rivals so far in 2021, though the world’s reserve currency hasn’t seen much in the way of buying pressure lately.

If we see a stronger-than-anticipated NFP reading, traders may look to the as a possible sell candidate. The world’s most widely-traded currency pair is approaching the bottom of the 1.1950-1.2225 range that has contained rates for the past seven weeks, an da break below that area could open the door for a deeper retracement toward 1.1800 as we move through the month of March.

On the other hand, is poised to benefit from a potentially soft US jobs report. The pair is riding its 21-day EMA higher and has shown signs of forming a based this week after pulling back from last week’s multi-year highs. A weak jobs report could be just the bullish catalyst that cable needs to resume its established uptrend.