After last month’s rather depressing ll report, which itself closed out one of the more depressing weeks in US history, there are some signs that this month’s jobs report could bring cause for optimism.

Most Americans received desperately-needed $600 stimulus checks in January (and there’s increasing confidence that another round of fiscal stimulus is on the way), vaccine distribution continued apace, and the country ultimately saw a smooth transition of power to new political leadership. While there’s no doubt that dark days still lie ahead, traders believe that the labor market will see improvement, with estimates for job creation near 60k and wages anticipated to rise 0.3% m/m. 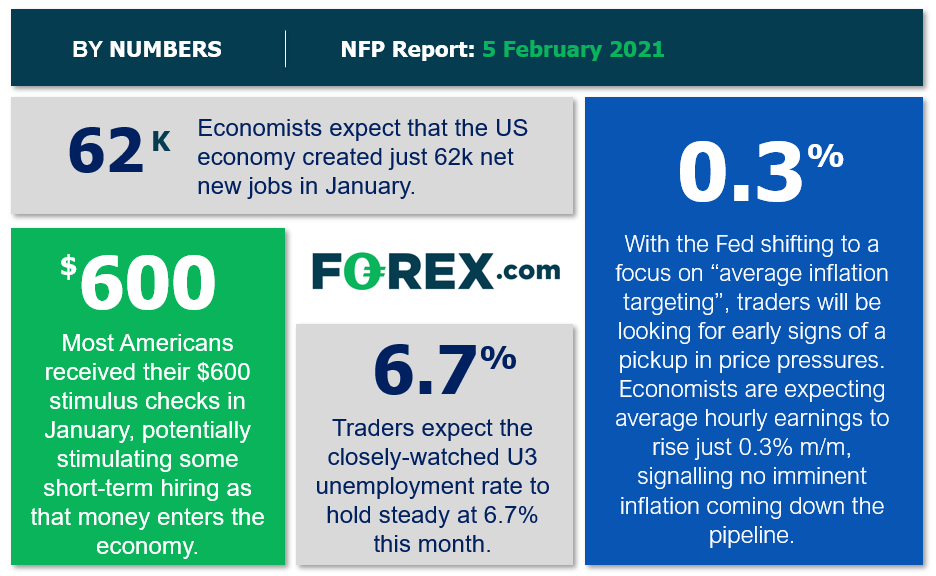 As we’ve noted repeatedly over the last few months, traders should take any forward-looking economic estimates with a massive grain of salt given the truly unparalleled global economic disruption as a result of COVID-19’s spread. That said, weighing the data and our internal models, the leading indicators point to a potentially better-than-expected reading from the January NFP report, with headline job growth potentially seeing an increase of 100-200k jobs, albeit with a bigger band of uncertainty than ever given the current state of affairs.

After getting walloped through the last three quarters of 2020, the US dollar has staged a (so far tepid) recovery in 2021, and Friday’s NFP report will help determine whether the world’s reserve currency can keep the rally going through February.

If we see a stronger-than-anticipated NFP reading, traders may look to the as a possible candidate. The world’s most widely-traded currency pair is testing its 100-day EMA at 1.1975 as of writing, and a break below that indicator for the first time in over six months could open the door for continued downside in the coming weeks.

On the other hand, is poised to benefit from a potentially soft jobs report. The pair is in the middle of its 5-month bullish channel and has generally held up well despite strength in the greenback against other major rivals, pointing to the potential for the pair to lead the way higher if the buck resumes its longer-term downtrend.