Sometimes officials call for the foreign exchange market to reflect fundamentals as if they can do anything but. As businesses and investors, we are more interested in which fundamentals are driving prices than some academic debate over what fundamental considerations ought participants emphasize.

Data from Q4 may be dated and may not move anyone’s needle, outside some economists and bookkeepers. That includes the eurozone figures due out at the end of the week. We know that the manufacturing sector is faring better than and that the December was strong at 55.2, its best level since mid-2018. While manufacturing continued to show resilience last month, the PMI eased. Clearly, the risk is that the euro area contracts in Q1 21 and by more than the 0.7% seen in Q4 20. Much depends on the contagion and the vaccine rollout, but a contraction around the magnitude seen in Q1 20 (-3.7%) seems reasonable at this juncture.

Germany’s December trade figures will not have much market impact, but they may be notable for insight into broader issues. In the first 11-months of 2020, Germany reported a of 165 bln euros, down 21% from the same period in 2019 and about 23% lower than the comparable 2018 period. Yet, the eurozone as a whole experienced a larger , 208 bln euros in the January-November period last year, up from 200 bln euros from the same period in 2019 and 32 bln euros higher than the first 11-months of 2018. The December eurozone aggregate figures are due February 15.

Merkel’s chief of staff, and an MP in his own right, wrote an op-ed recently that controversially called for the acknowledgment that a return to the black zero (Schwarze Null), the constitutional provision that limits the size of the deficit to 0.35% of GDP, will not be possible for several years. As one would expect, there was an immediate pushback, which included Laschet, the new head of the CDU party and the leading candidate to run for Chancellor in September. Even Merkel’s office offered no support.

The debt brake was suspended due to the pandemic. Germany plans on boosting its net debt issuance to 180 bln euros this year from 130 bln last year. After running modest budget surpluses in recent years (an average of about 1.2% for the five years before 2020), Germany ran recorded a deficit of nearly 6.5% of GDP last year, and this year’s deficit is projected to fall to about 4.5%. The key is the 2022 budget. Even with some conservative assumptions, it is hard to see it much below 2% of GDP. Perhaps it is instructive to note that the one voice that was even mildly supportive was the current SPD finance minister Scholz, his party’s candidate for Chancellor.

It may give a sense of what is at stake in the German election, even though after years of cohabitation, the distinction between the CDU and SPD have blurred. For several years, observers blamed Germany’s ordo-liberalism, which eschews Keynesian demand management, as the root of Europe’s problems. Yet, ironically, the suspension of the fiscal restraint will be associated with European economic weakness, not strength.

Japan’s January will offer insight, but the fall in the composite PMI to 46.5 from 47.5 in December, a four-month low, sours the outlook. The forward-looking new orders component fell to 46.5 and has not been above the 50-boom—bust level for a full year. However, machine tool orders are suggesting a somewhat different story.

Machine tool orders fell on a year-over-year basis from October 2018 through October 2020 without fail. The first increase was last November (8.6%), followed by a 9.9% rise in December. Conventional wisdom seems to exaggerate Japan’s export prowess, often lumping it together with Germany. However, as a percentage of GDP, Japanese exports are around 18% while Germany’s are closer to 50%. By comparison,  exports account for nearly 13% of US GDP. However, machine tools are a different story.

Foreign orders account for around two-thirds of Japan’s machine tool orders, and the improvement reflects the recovery in Asia, not just China, but especially China. China’s orders jumped almost 25% in December, twice November’s increase, and puts the year-over-year rate at 107% in November and nearly 180% in December. Excluding China and East Asia, orders from other parts of Asia rose 79.5% year-over-year in December. This times series also confirms a recovery in Australia and New Zealand. Orders from them rose by an average monthly pace of almost 19% in the last four months of 2020.

Orders for Japanese machine tools from the EU were off 6% year-over-year in December, which may be understandable given the economic contraction in Q4 20, which is expected to carry into Q1 21. However, the expansion in the US failed to sustain its orders. After rising 6.7% year-over-year in November, orders slumped almost 15% in December.

The US and China’s January CPI figures may be among the most market-sensitive high-frequency economic reports in the week ahead. The data points will be released on February 10 in each country. In some ways, they are moving in opposite directions for the same reason: the base effect. Last January marked the peak of a surge in , driven by food prices, that saw the CPI double to 5.4% from 2.7% at the end of H1 19. It spent 2020 trending lower. China’s CPI returned to 2.7% last July and kept falling. It went negative (-0.5% last November) and popped back to 0.2% in December.

The PBOC has been keeping liquidity conditions tight. The overnight repo rate has traded well above the bond yield recently. Even when the central bank matched the funding coming due on February 4, it did so with a more expensive and longer-term facility. Officials are not responding to an over-heating economy. That is why talk of a rate hike is premature. The concern is leveraging in stocks, bonds, and housing. The Chinese New Year celebration runs from February 11 through February 17. Even though the pandemic may see reduced holiday travel and expenditures, the still may be a strong demand for liquidity, and the PBOC’s operations will be scrutinized.

In the US, the issue for investors is that inflation will rise. In fact, since the end of October, the eve of the election, the increase in expectations has more than accounted for the rise in yields. Since then, the yield has risen about 30 basis points, while the 10-year breakeven (the difference between the conventional bond yield and the inflation-protected security) has risen by nearly 50 bp. We note that deeper negative real rates did not prevent the from rebounding smartly over the past month, recouping, for example, more than half of what it lost to the since the election. Before the disappointing , the dollar traded above its 200-day moving average against the (~JPY105.60) for the first time since last June.

The inflation that our monetarist friends are concerned about is more about a grind than a bump in a month-over-month reading. Recall that headline CPI rose 2.3% year-over-year in December 2019. The pandemic distortions eased, and the year-over-year rate was between 1.2% and 1.4% in the last four months of 2020. The rate may have crept up in January, but it is about to surge.

As the pandemic struck, the CPI fell by 0.4% in March, a whopping 0.8% in April, and another 0.1% in May for good measure. These numbers will drop out of the year-over-year calculation and be replaced by some higher number. Even unchanged readings would make it appear inflation was accelerating. It is not so different from an apparent surge in eurozone inflation to 0.9% in January from -0.3% in December. The drama was a function of technical things like the end of a six-month VAT holiday in Germany, a delay in some seasonal sales in France, and an adjustment in the CPI basket’s composition. 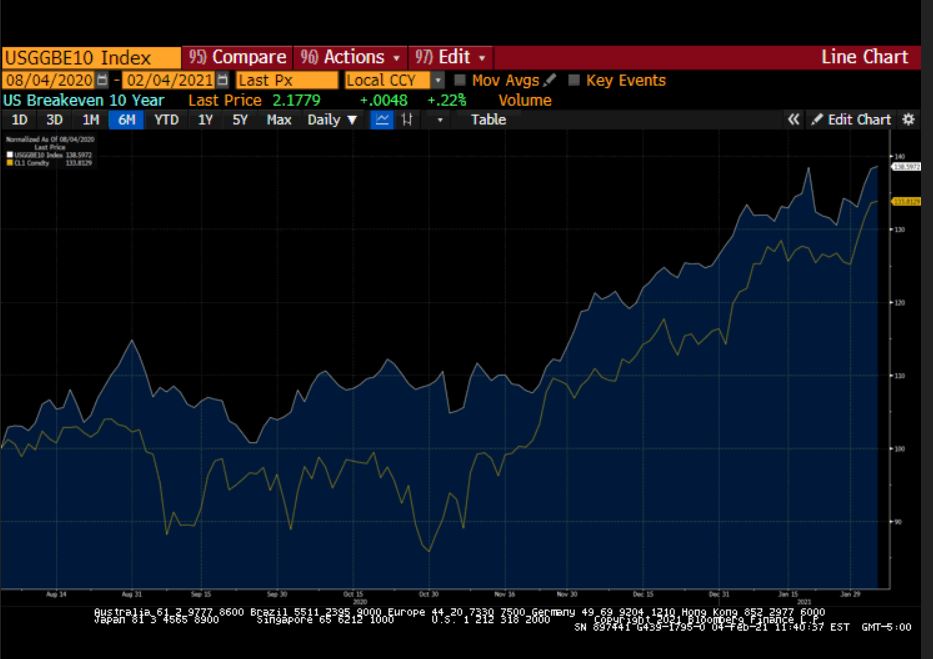 What the base effect giveth, it taketh away. Headline CPI jumped by 0.6% in June and July, and these too will be dropping out of the comparison but likely replaced by smaller increases. The spring inflation scare will give way to a more relaxed summer, only to flare again at the end of the year. Of course, the base effect is not the only driver. Without putting too fine a point on it, the accompanying chart shows the co-movement of the 10-year breakeven rate and the generic contract (the time series have been normalized to show a common y-axis).

It may be like the correlation between the number of churches and the number of mortuaries. It indeed is not a causal relationship. They are both correlated to a third variable, population size. Inflation expectation and oil prices could be related to the expectations that a large part of President Biden’s stimulus proposals will pass before the extension of jobless benefits and other support from the last stimulus expires. This is even before the larger stimulus and infrastructure initiative is unveiled, perhaps before the end of the month.

Yet, it would not explain the general good fit between oil prices and 10-year breakeven. Moreover, the last leg up in the price of crude appears to be driven more by supply than demand. US and China have drawn down their inventories. In the US, it has reduced inventories by nearly 11 mln barrels over the past two weeks, which was more than expected. The overhang of supply, measure against the five-year average, has almost been absorbed. There have also been other supply disruptions, such as in Libya. The front-month WTI futures contract was a little below $36 a barrel at the end of October. Last week it was probing $56, more than 10% above year-ago levels, and that gap will expand over the next couple of months.

As Federal Reserve Chair Powell noted at his recent press conference, inflation dynamics do change but gradually. Before the onset of the pandemic, most high-income countries were experiencing below desired levels of inflation. There is no compelling reason why we should assume that after the distortions are worked through, the dynamics have changed in a persistent way. Deduced from the first principles, many see the kindling wood for inflation are in place and predict with near certitude that it will ignite. The compelling pushback is from inductive reasoning. Whatever the dynamics of inflation are, it is clear that the size of a central bank’s balance sheet or the private or public debt levels has not been helpful predictors of inflation for more than a decade.