What do November and Fed Chairman Jerome l have in common? They’re both due today, with data on the way from several car companies and Powell testifying to Congress.

Vehicle sales might provide Powell some of the information he’ll need in front of elected officials. If lack of fresh fiscal stimulus has hurt consumer demand, one place where that might show up is the auto market. How many people go car shopping if they’re worried about losing their jobs or their business going under?

At around the time Powell takes the mic, investors get another key data point that might interest the Fed chair—November . As noted yesterday but worth repeating, October ISM was very strong at 59.3%—the best in two years. Analysts expect a slight dip to 58% in November, according to research firm Briefing.com. Any sign of a more dramatic pullback might raise concerns that lack of government stimulus and rising virus cases have caused a negative blowback.

Speaking of “negative blowback,” shares of Zoom (NASDAQ:) are down nearly 7% in pre-market trading. Arguably everything in its earnings yesterday afternoon had to be smooth sailing to see shares climb further, at least in the near-term. When you’re priced for perfection, so to speak, it helps to be perfect. But of course few, if any, ever are. Apparently having the company say it “only” expects 329% revenue growth in the current quarter wasn’t enough for a market that always wants more and better (growth was 367% last quarter), and shares tumbled.

ZM might be the best example of a “stay at home stock.” While it got pounded 5% after earnings, some of the “reopening stocks” also took it on the chin yesterday. Carnival (NYSE:), Macy’s Inc (NYSE:), and Gap (NYSE:) were among the ones hit, though they all bounced back this morning ahead of the bell. Pressure on retailers—particularly among those with a heavy presence in shopping malls—might reflect media reports saying foot traffic on Black Friday fell roughly 50% from a year ago.

Generally, except for ZM, it looks like it might be a “bounce back” day here on the first morning of December. The old month was one for the books, with all three major indices enjoying double-digit gains and their best months since April. That takes some of the sting away from negative September and October performances. The market continues to look far ahead to a time when hopefully vaccines allow normalcy to return. It’s a long road, and a difficult one logistically, but for now, exuberance reigns. It’s up to investors to decide if they’re comfortable scooping up more here, but for what it’s worth, the risk meter fell today as volatility dropped and yields rose.

Powell’s testimony to Congress about the Coronavirus Aid, Relief and Economic Security (CARES) Act starts at 10 a.m. ET today. He’s scheduled to do a follow-up tomorrow. In prepared remarks, Powell didn’t say anything we haven’t heard him say before, so the Q&A is the part that might be interesting.

Salesforce Earnings Could “Pick Up the Slack” Later

The main event after the bell this afternoon could be Salesforce.com (NYSE:) . However, the focus might be less on CRM’s quarter and more on their expected announcement that they’re acquiring Slack Technologies (NYSE:). As my fellow TD Ameritrade Network* contributor Kevin Hincks, Manager, Trader Contributor, TD Ameritrade, said yesterday, CRM’s apparent ability to bring Slack into their world—and offer it as part of their package the way Microsoft (NASDAQ:) does with its Teams platform—could be a big positive.

That said, CRM would be paying what some analysts see as a pretty hefty amount for WORK in what media reports said is expected to be around a 50/50 stock and cash acquisition. We’ll probably hear more detail this afternoon.

While Monday’s slide was a disappointing way to end November, try to keep things in perspective. After all, if anybody said to you in March, “Hey, we’re going to have a year where really most businesses are working at not-full capacity, most restaurants may not even be open, people aren’t going to the office, and oh yeah, by the way, we’ll hit all-time highs,” people would have thought you were nuts.

Also, the soft start this week might have reflected late-month profit taking after double-digit gains during November for most of the major indices. Nothing goes straight up forever. As we noted here yesterday, don’t be surprised by similar action in December, especially as we get toward later this month. While some people will talk about a “Santa Claus” rally that often takes place in late December, others note that maybe Santa arrived a bit early this year and some of that positivity is already built in. Tax-related worries with a new administration taking office Jan. 20 could also conceivably drive some selling as the month moves along.

Buy the Dip Not Over Yet, Apparently

At the same time, it’s hard to see any crippling sort of selloff this month unless maybe the geopolitical or COVID-19 situation gets a lot worse (and COVID-19 obviously is very bad now but the markets have mostly shook it off). There still appears to be a lot of buying interest under the market, something we saw again Monday with a little “buy the dip” mentality showing up around midday, and again early Tuesday. Between the Fed’s low rate policy and hopes for quick vaccine approvals, it feels to a certain extent as if the market continues to work with a net, though nothing is guaranteed.

Another thing we’ve been noting for a while and the media recently picked up on is the broader nature of this recent rally, which to some extent has been led by small caps and cyclicals. These are sectors that sat on the sidelines a lot of the year as mega-cap Tech and “stay-at-home” stocks accounted for a major portion of the rally. Now sectors like Energy and Financials are finally having their day in the sun, and that’s healthier than seeing just a few behemoths driving indices higher thanks to their heavy market weights. As Bloomberg pointed out Monday, so-called “value” stocks just had their best month on record, and so did the beaten-down Energy sector. The small-cap also has been making record highs.

Despite these broad-based gains, a lot of the recent debate centered around bonds and why they don’t seem to be playing the same round as the rest of Wall Street. Is this “risk-off” neighborhood of the market telling us something we should know? Perhaps. Bonds edged up last week even as stocks, volatility, and gold all pointed toward a “risk-on” mood. Yields ended about flat Monday and remain 10 basis points below recent highs. One theory is that the Fed’s dovish stance is just too hard for investors to fight against. It wouldn’t be too surprising if yields continue to face headwinds, but forecasting that is like forecasting icy conditions in Antarctica. 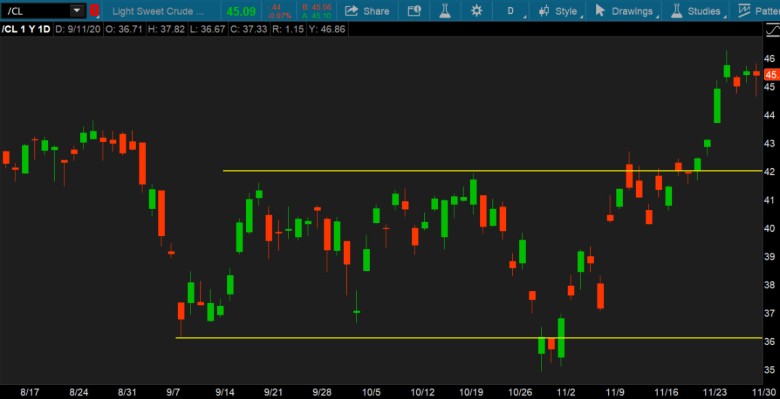 Data source: CME Group. Chart source: The thinkorswim® platform from TD Ameritrade. For illustrative purposes only. Past performance does not guarantee future results.

prices broke out of their trading range over a week ago, probably on hopes that travel would resume as a result of the positive vaccine news. Investors may have been hopeful about a decision to implement production cuts at the yesterday. However, no deal was reached and although oil prices dropped during the trading day, most of the loss was made up by the close of the trading session. We’ll see if an agreement is reached when OPEC reconvenes.

Volatility, Thy Name is Bitcoin

It’s been about a month since we mentioned here, and a lot’s happened since then. The cryptocurrency soared to nearly all-time highs, and then sold off last week around Thanksgiving before popping again Monday. The holiday-week sell-off appeared to scare some people a bit in terms of them seeing just how fast it can move, particularly when the rest of the world is closed. It’s likely many people still have great interest in it, but it’s one of those things where everybody’s interested but many people are hesitant primarily because they still don’t fully understand how it all—bitcoin, digital payment systems, and the distributed ledger technology that underpins bitcoin and other cryptocurrencies, that is—works. Some people who were thinking of getting into crypto might have been shaken up a bit by that plunge, and that’s emblematic of how volatile it can be.

Though bonds and volatility fell early Tuesday, bounced, climbing back above $1,800 per ounce. Some analysts attributed this to a weak dollar, and in a way this relationship now makes more sense than last week when gold and the dollar were both falling. They tend to move opposite ways. One thought is that the may be under pressure in part because the incoming Biden administration may be prepared to work more closely on the trade relationship with Europe, which would potentially strengthen Europe’s economy. The recently hit its highest levels of the year vs. the dollar. Also, the dollar has been under pressure for months from the Fed’s dovish rate policy.

The way this week started, you might get the feeling that Tech and “stay at home” stocks continue to play a big support role on down swings. Info Tech and Healthcare were the only sectors to finish in the green on a rough Monday when most sectors got hooked. A surge in Moderna (NASDAQ:) shares aided Healthcare after that company made it four weeks in a row with positive Monday vaccine news.

On the Tech side yesterday, it was interesting to see semiconductor firms generally finish higher despite more trade restrictions being announced against China. Perhaps investors don’t expect this one to have too much teeth—or staying power—considering there will be a change at the top in 50 days or so. It’s unclear what President-elect Biden’s trade plans might be, but generally the atmosphere could become a bit smoother. Washington watchers expect him to conduct trade policy less publicly than we’ve seen over the last four years.

Energy, which had been having an amazing November, got crushed Monday in what might have been profit taking. The sector also apparently took some heat from OPEC’s failure to confirm an extension of output cuts at its meeting. Now it looks like a decision might come later this week, media reports say, as OPEC deals with some members exceeding quotas.