After March kicked off with a session that indicated the worst for stocks may be over (for now), Tuesday saw the indices sell-off towards the close.

At least Rocket Mortgage (NYSE:) had a good day, though! And, at least the didn’t spike either. But that could change. Yields ticked up overnight to 1.433%, after President Joe Biden pledged enough vaccine supply to inoculate every American adult by the end of May.

So, where do we go from here? This positive economic and health news is excellent for reopening. But rising bond yields are a blessing and a curse. On the one hand, bond investors see the economy reopening and heating up. On the other hand, with the Fed expected to let the GDP scorch without hiking rates, inflation may return.

I don’t care what Chairman Jerome Powell says about inflation targets. The price of gas and food is increasing already. In fact, according to Bloomberg, food prices are soaring faster than inflation and incomes.

For January, Consumer Price Index data also found that the cost of food eaten at home rose 3.7% from a year ago — more than double the 1.4% year-over-year increase in the prices of all goods included in the CPI.

So about March. Will it be more like Monday or Tuesday? Was the second half of February the start of the correction that I’ve been calling for? Or is the “downturn” already over? Only time will tell. While I still do not foresee a crash like we saw last March and feel that the wheels are in motion for a healthy 2021, I still maintain that some correction before the end of this month could happen.

Rising bond yields are concerning. Inflation signs are there. But structurally, I don’t think it will crash the market (yet).

Corrections are also healthy and part of normal market behavior. And we are long overdue for one. It’s been almost a year now. Only twice in the last 38 years have we had years without a correction (1995 and 2017).

A correction could also be an excellent buying opportunity for what could be a great second half of the year.

With that said, to sum it up:

There is optimism but signs of concern. A further downturn by the end of the month is very possible, but I don’t think that a decline above ~20%, leading to a bear market, will happen. 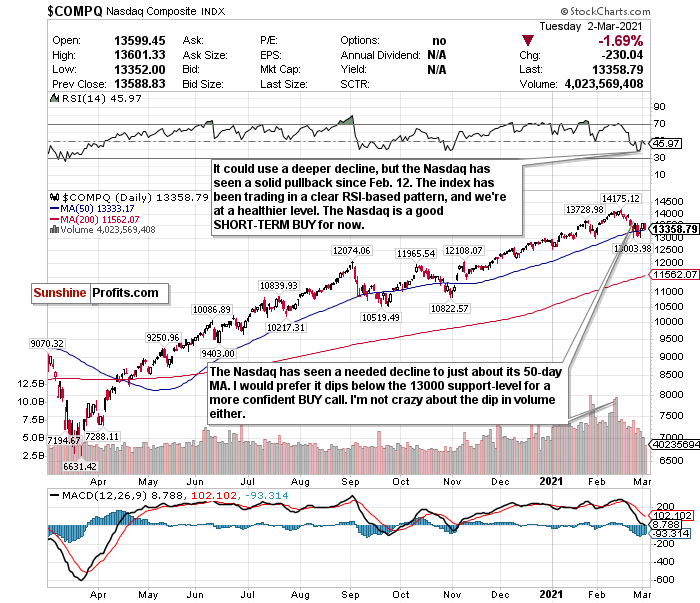 The Nasdaq’s slowdown has been long overdue. Even though more pain could be on the horizon, I like the Nasdaq at this level for some buying opportunities.

But I’d prefer it drop below support at 13000 for real buying opportunities.

But it can’t hurt to start nibbling now. If you waited for that perfect moment to start buying a year ago when it looked like the world was ending, you wouldn’t have gained as much as you could have.

Plus, it’s safe to say that Cathie Wood, the guru of the ARK ETFs, is the best growth stock picker of our generation. Bloomberg News’ editor-in-chief emeritus Matthew A. Winkler seems to think so, too. Her ETFs, which have continuously outperformed, focus on the most innovative and disruptive tech companies out there. Not to put a lot of stock in one person. But it’s safe to say she knows a thing or two about tech stocks and when to initiate positions. And she did a lot of buying in the last few weeks.

I also remain bullish on tech, especially for sub-sectors, like cloud computing, e-commerce and fintech.

Before Feb. 12, I would always discuss the Nasdaq’s RSI and recommend watching out if it exceeds 70.

Now? As tracked by the Invesco QQQ Trust (NASDAQ:) ETF, the Nasdaq has plummeted almost 5.5% since Feb. 12 and is closer to oversold than overbought!

But it’s still not enough.

Outside of the , the has been consistently the most overheated index. But after its recent slowdown, I feel more confident in the Nasdaq as a short-term buy.

The RSI is king for the Nasdaq. Its RSI is now around 45.

I follow the RSI for the Nasdaq religiously because the index is merely trading in a precise pattern.

In the past few months, when the Nasdaq has exceeded an overbought 70 RSI, it has consistently sold off.

Again, if the index drops below 13000, and the RSI hits undeniably overbought levels, get on the train.

But because we haven’t declined just enough, I am making this a short-term buy. But follow the RSI literally and take profits once you have the chance to.

For an ETF that attempts to directly correlate with the performance of the NASDAQ, the Invesco QQQ ETF (QQQ) is a good option.