Equities bounced from their worst weekly decline since October, helped by a rise in mining shares after organized retail traders bought silver, following thousands of Reddit posts and hundreds of YouTube videos. Gains in technology stocks may have also fueled the improvement in the broader risk appetite.

The traded higher against all the other G10 currencies on Monday and during the Asian session Tuesday. It gained the most versus , CHF, CAD, and EUR, while it eked out the least gains against and . 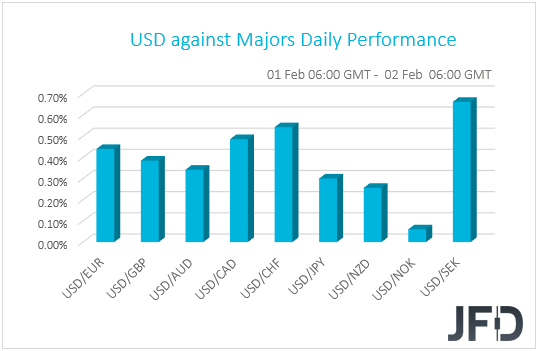 The strengthening of the US dollar and the weakening of the suggest that markets traded in a risk-off fashion yesterday and today in Asia. However, the weakening of the safe-haven points otherwise. Thus, in order to get a clearer picture with regards to the broader market sentiment, we prefer to turn our gaze to the equity world. There, major EU and US indices were a sea of green, with the positive investor morale rolling into the Asian session today. 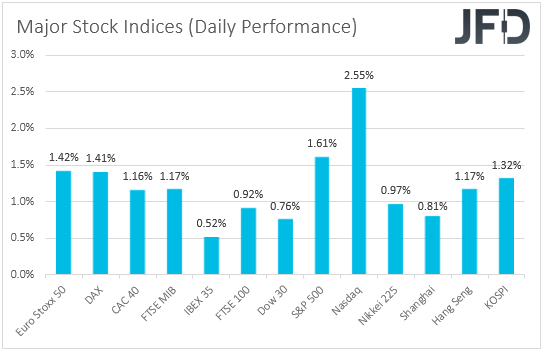 Equities bounced from their worst weekly decline since October, helped by a rise in mining shares after organized retail traders bought silver, following thousands of Reddit posts and hundreds of YouTube videos, a similar phenomenon to the one which has driven a 1.600% rally in the shares of GameStop (NYSE:). Gains in technology stocks may have also fueled the improvement in the broader risk appetite.

As for our view, although we may see more volatile swings due to coordinated buying of different assets by retail investors, we stick to our guns that as soon as the phenomenon dissipates, equities are likely to sail north and safe-havens south. We believe that the rollout of the coronavirus vaccinations, although at a slower pace than previously expected, the extra-loose monetary policy around the globe, and a large fiscal spending package in the US, are a blend of developments which could keep the overall investor morale supported.

Now, back to the currencies, the was among the main losers, perhaps due to Germany’s plunging by more than expected in December, while the slid somewhat overnight, after the RBA decided to expand its QE program to buy additional AUD 100bn of bonds. Officials also noted that the Aussie has appreciated and is now near the upper end of the range of recent years, which may be another driver behind the currency’s overnight slide. The decision for expanding QE may have come as a surprise to many (including us), who have expected the Bank to hold off from acting. Even the most pessimistic participants have been anticipating such an announcement to be made at the next gathering.

In any case, with the decision now behind us, and the Bank reiterating the view that the economic recovery is well under way and that it has been stronger than earlier expected, we see the case for the Aussie to rebound at some point soon and trade higher. We believe that the main driver of this risk-linked currency is likely to continue being the broader risk appetite, despite some jawboning by the RBA. As we already noted, we expect investors’ morale to continue improving, something that is likely to keep the Aussie supported.

Yesterday, the finished its trading session below the short-term tentative downside resistance line take from the high of Jan. 26. However, this morning, the cash index broke above that line and now seems to be aiming for higher areas. That’s why we will take a slightly more positive approach, in regards to the near-term outlook.

On the other hand, if the price falls back below the aforementioned downside line and then drops below the 3757 hurdle, marked by yesterday’s intraday swing high, that would also place the index below the 200 EMA, raising the chances of seeing further declines. The S&P 500 could then move to the 3724 hurdle, a break of which may clear the way to the 3700 level. That level is marked by another intraday swing high from yesterday.

From the second half of January, has been successfully moving higher, while trading above a short-term tentative upside support line drawn from the low of Jan. 21. However, let’s not forget that at the same time, the pair is still trading below a medium-term downside resistance line taken from the high of Oct. 20. As long as the rate remains in between the two trendlines, we will stay on the neutral side.

If the aforementioned downside line continues to provide strong resistance, the bears might jump in and push the rate south again. More sellers could join in if EUR/AUD breaks the previously-mentioned upside line and falls below the 1.5761 hurdle, marked by the low of Jan. 28. This move might open the door for a further slide to the 1.5674 hurdle, a break of which may lead to a test of the 1.5597 level. That level is marked near the lows of Jan. 14 and 21.

Alternatively, if the above-discussed downside line breaks and the rate rises above the 1.5947 barrier, marked by the high of Jan. 28, that would confirm a forthcoming higher high, potentially inviting even more buyers into the arena. EUR/AUD could then travel to the 1.6030 obstacle, marked by the highest point of January, which may provide a temporary hold-up. That said, if the bulls are still feeling way too excited, they might send the pair further north, possibly targeting the 1.6064 hurdle, or the 1.6112 level, marked by the high of Dec. 30.

During the European session, we get Eurozone’s 1st estimate of for Q4, which is expected to have contracted 1.8% qoq, after rebounding 12.7% qoq in Q3. This is likely to raise concerns with regards to the bloc’s economic activity, especially taking into account the slowdown in the rolling of the coronavirus vaccinations, but we believe that EUR-traders are likely to treat this release as outdated, given that we already have data showing how the Euro-area economy has entered the new year, the likes of the PMIs. With the staying in contractionary territory, the ECB is likely to remain ready to act again if the situation worsens, but with Lagarde saying that the downside risks are less pronounced, and with inflation expected to have rebounded in January, we don’t see the case for the ECB easing further its policy at its next policy .

Later in the day, we get the API (American Petroleum Institute) report on crude oil for last week, but as it is always the case, no forecast is available.

Tonight, during the early Asian morning Wednesday, New Zealand’s for Q4 is coming out and the forecast points to an increasing unemployment rate, to 5.6% from 5.3%, while the employment change is expected to show that the economy has lost 0.8% qoq jobs, the same pace of decline as in Q3. 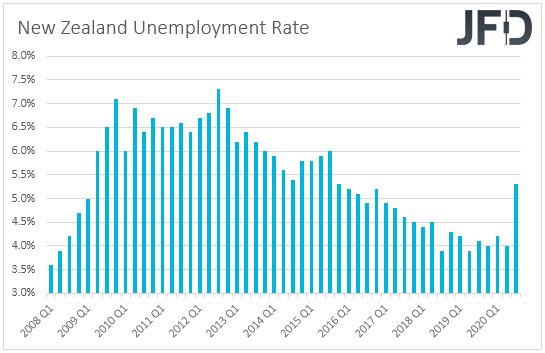 Back in November, the RBNZ decided to keep its official cash rate and its Large-Scale Asset Purchase program unchanged, with Governor Adrian Orr saying that domestic activity since August has been more resilient than previously assumed. Q4 inflation stayed unchanged at +1.4% yoy, within the Bank’s target range of 1-3%, keeping the probability of negative interest rates at very low levels.

Although a weak employment report could raise some concerns, and thereby hurt the , we doubt that it could drastically alter expectations around the RBNZ’s monetary policy plans. In order for the RBNZ to start considering negative interest rates again, we believe that we need to see more data disappointing.

As for the speakers, we have two on today’s agenda: New York Fed President John Williams and Cleveland Fed President Loretta Mester.