Equities were a sea of green on Monday and during the Asian morning Tuesday, due to positive updates on US President Donald Trump’s health, as well as optimistic headlines over a fresh US stimulus package.

Overnight, the kept interest rates unchanged, disappointing those expecting a rate cut at this gathering. However, it kept the door for further stimulus in the foreseeable future wide open.

The US traded lower against all but two of the other G10 currencies on Monday and during the Asian morning Tuesday. It underperformed the most against NOK, EUR, and GBP in that order, while it eked out some gains only versus JPY. The greenback was found virtually unchanged against NZD. 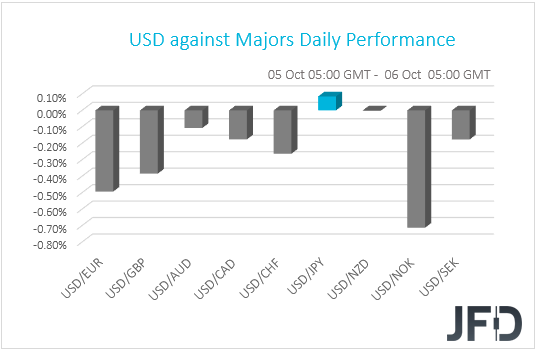 The weakening of the dollar and the suggests that financial markets traded in a risk-on fashion. However, the weakness in the risk-linked points otherwise. Thus, in order to get a clearer picture with regards to investors’ appetite, we prefer to turn our gaze to the equity world.

There, major EU and US indices were a sea of green, with the positive morale rolling somewhat over the Asian session today. Japan’s , Hong Kong’s , and South Korea’s gained 0.51%, 0.71%, and 0.28% respectively. Chinese markets stayed closed in celebration of the National Day. 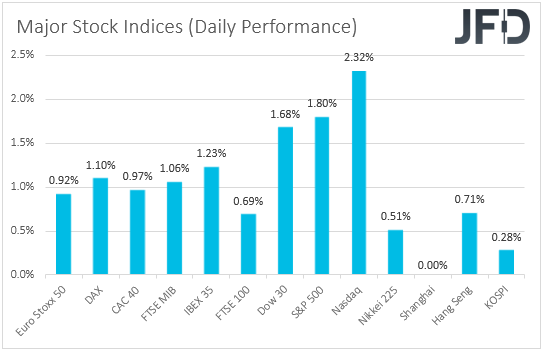 What may have prompted investors to increase their risk exposure may be positive updates on US President Donald Trump’s health, as well as optimistic headlines over a fresh US stimulus package.

The US President was tested positive for COVID-19 on Friday, but yesterday, doctors treating him said that his condition is improving and sent him back to the White House, diminishing concerns over the government operating in a chaotic manner, as well as uncertainty over the Nov. 3 election.

On the stimulus front, House Speaker Nancy Pelosi and Treasury Secretary Steven Mnuchin had a telephone conversation, agreeing to continue talks today in order to find common ground on legislation. White House Chief of Staff Mark Meadows said that there is still potential for an accord, and that President Trump is committed to that.

As for our view, we believe that encouraging news are likely to continue supporting equities and the broader market sentiment. However, we are still reluctant to call for a long-lasting recovery. We prefer to take things day by day.

Coronavirus infections continue to rise at a fast pace, with last Thursday’s new global cases nearing their record, which adds to concerns over more lockdown measures around the world. On top of that, another source of concern may be the US election. As we get closer to the election day, investors may start getting more nervous.

After a strong rebound on Friday, Nikkei 225 seems to be on track of recovering most of its losses made during last week. The index is now trading above a short-term tentative upside support line taken from the low of Sept. 21. The RSI and the MACD are showing positive price momentum, which could keep the upside scenario on the table for now. Hence our somewhat positive approach for now.

In order to aim for higher levels, we would first like to see a break above yesterday’s high, at 23448. If such a move occurs, this would confirm a forthcoming higher high, and Nikkei 225 might rise to the 23525 hurdle, marked by the highs of Sept. 16 and 30, where the price might stall for a bit. However, if the buying interest is still on the higher side, a further push north could bring the index to the 23615 and 23631 resistance barriers, marked by the highs of Sept. 29 and 3 respectively.

On the other hand, a price-drop below today’s current low, at 23326, may signal that not all is well among the buyers, as such a move could open the way for a larger correction lower. Nikkei 225 might then travel to the 23222 obstacle, a break of which may clear the path to a test of the area between the 23127 and 23106 levels, marked by the low of Sept. 30 and an intraday swing high of Oct. 2. That’s where the index could get a hold-up temporarily, as the price might also get support from the previously-discussed upside line.

RBA Keeps Rates On Hold Despite Speculation For A Cut

Overnight apart from developments over Trump’s health, we also had an RBA monetary policy decision. The Bank decided to keep both the cash rate and the target for the 3-year Government bond yields unchanged at 0.25%.

In the accompanying statement, officials said that they continue to consider how additional stimulus could support jobs as the economy opens up further, but also noted that the decline in Q2 output was smaller than in most other countries. They added that labor market conditions have improved somewhat over the past few months and that the unemployment rate is likely to peak at a lower rate than earlier expected. 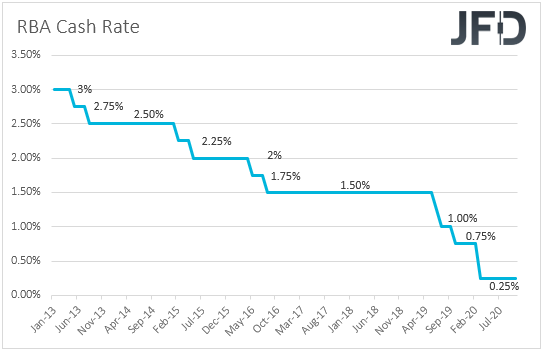 Remember that a couple of weeks ago, RBA Deputy Governor Guy Debelle flagged the prospect of more easing, with options including currency market intervention and negative interest rates. This raised speculation that officials could hit the cut button as early as today, and thus, an unchanged policy with a relatively more sanguine statement than before resulted in a higher at the time of the release.

However, the currency was quick to give back the decision-related gains and to trade even lower, perhaps due to the fact that officials kept the door for additional easing wide open. In any case, we believe that Aussie traders are likely to turn their attention back to headlines and developments surrounding the broader market sentiment. As a risk-linked currency, the Aussie tends to strengthen during periods of market optimism, while it underperforms when investors trade in a risk-off manner.

Since the reversal to the upside in the end of September, AUD/USD continues to slowly grind higher. The pair is currently balancing above a short-term tentative upside support line, drawn from the low of Sept. 30, and keeps oscillating around the 200 EMA on our 4-hour chart.

That said, the rate is struggling to overcome the 0.7209 barrier, which is the current highest point of October. In order to aim for slightly higher areas, we would need to see a break above that barrier first. Until then we will take a cautiously-bullish approach.

If, eventually, the pair does climb above that 0.7209 hurdle, that may attract a few more buyers into the game, who could help push the rate further north. AUD/USD might then travel to the 0.7235 obstacle, a break of which may open the way to the 0.7254 level. That level marks the low of Sept. 17.

The pair might get halted around there, as it could also find resistance near a short-term tentative downside line taken from the high of September 1st. If the rate finds it difficult to overcome that line, this whole move higher may be seen as a temporary correction, before another leg of selling.

Alternatively, if the pair breaks the aforementioned upside line and then falls below the 0.7162 hurdle, marked by the low of Oct. 5, that may spook the buyers from the arena for a while and allow the sellers to take control. In that case, AUD/USD might end up sliding towards the 0.7130 obstacle, a break of which could open the way to the 0.7100 level, which is the low of Sept. 30.

During the European session, the UK construction for September is coming out, and the forecast points to a small decrease, to 54.1 from 54.6. Later in the day, we get the and trade balances for August. Both the US and Canadian deficits are expected to have widened somewhat.

With regards to the energy market, we have the API (American Petroleum Institute) weekly report on crude oil , but as it is always the case, no forecast is available.