Why are yields rising? What does rising yields mean?

But, to this point I’ve kept my mouth mostly shut on this, at least in public. I reserve my gut reactions for my Patrons, giving us the opportunity to work through ideas.

The financial press industry is obsessed with gut reactions because headlines are all that matters. It used to just be to sell newspapers or generate clicks. But now, with algorithmic trading, headlines are the market.

Central banks and politicians use their pulpit in real time to stick save markets or push them in whatever direction they want them to go — at least in the near term.

So do short-sellers, media personalities, and boiler room blowhards… but enough about Jim Cramer. The market is comprised of all of this confusing and contradictory information.

And it’s why we’re obsessed with the news flow and desperate to parse the purposefully opaque language of those with control over the money spigots.

But the central banks, while they are powerful actors who have real ability to move markets, are ultimately at the mercy of the market itself.

It used to be that Fed Chairmen acted but never spoke. When I was a youngling very few people even knew who the Fed Chairman was.

Then Alan Greenspan came and changed that dynamic forever. Now they do nothing but speak. Now they are financial celebrities. Every day another important speech or press conference is on the schedule to set the tone for the markets.

Over the past 40 years or so, we’ve gone from no verbal intervention from the central banks to constant intervention. Central bank communications strategies prove the conclusions of Mises and Hayek from a couple of generations earlier:

Interventions into the free market always necessitate, later, an even greater intervention due to the misallocation of capital from its natural state. This natural state exists because of the needs and wants of the people who make up that system.

I know y’all know this stuff, but it’s important to review the basics every now and then.

When central banks muck with interest rates away from that natural rate of interest they stimulate one area of investment at the expense of another. There is a finite pool of real savings that can be deployed from previously profitable human action.

Lowering the cost of money below the natural rate consumes that pool faster than it can be replenished.

Eventually the pool is exhausted and some of the projects it financed are revealed to be uneconomic and must be liquidated. The boom created by cheap money begets the bust that inevitably occurs.

At that point the central banks are expected to come in and do something to save these projects because the societal cost of allowing the bust is far worse than maintaining the boom.

At least that’s he Hobson’s Choice they always present to us.

When your money is based on debt it means issuing more debt to pay for the past round of debt-based financing.

Well, what happens when we can’t lever it all up anymore?

What happens at the limit of debt issuance , when the amount of profit the economy generates is equal to the amount of money needed to service the issued debt?

Are we there now? Or did we pass that event horizon in 2008 with the fall of Lehman Bros.? It’s a good question but it’s not relevant except in the severity of the crisis that is staring us in the face.

Rates began rising across the of the U.S. yield curve months ago. It started back in August if anyone was watching carefully. 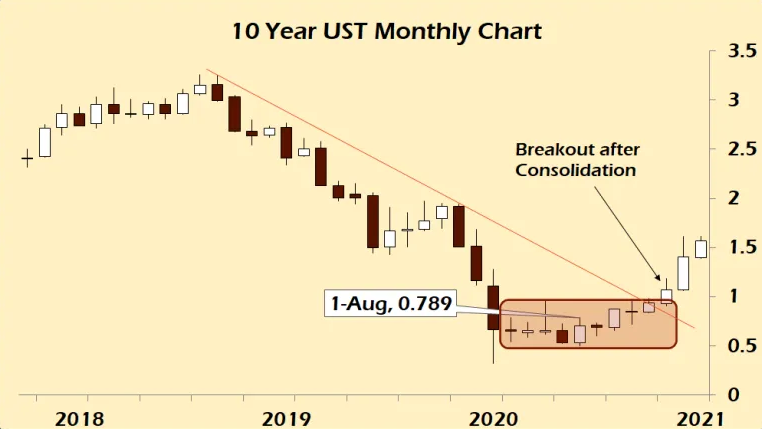 There wasn’t confirmation of a new trend until January. Only now is everyone starting to see what I’ve been worried about since the beginning of the year, the is firming.

But the dollar is supposed to be dying. It’s supposed to be ready for the ash heap of history. The irresponsible ers have been screaming this. The -only bugs keep insisting on it and insisting that the stock market is a bubble — which it is but not for the reasons they think.

All of that’s nonsense today. In some distant tomorrow yes, they are very likely if not certainly right.

But the dollar today is still the world’s reserve currency. It’s still the most needed asset in the world.

That is because the dollar, thanks to the Fed’s love affair with financial repression and zero-bound interest rates, has the biggest synthetic short position against it in the world.

All that debt is denominated in dollars. And dollars are getting scarce.

The central banks have tried desperately to jawbone the dollar down for the first two months of 2021. Gold has been screaming for weeks that there is a dollar shortage brewing. 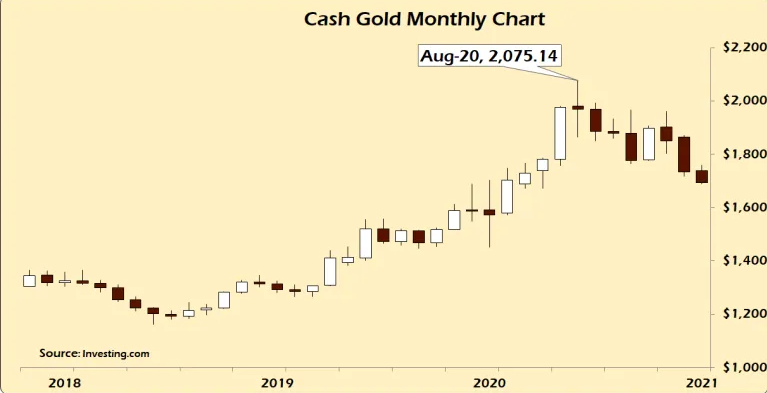 Yields began to rise the moment the Fed stopped putting more money into the system. When the stresses unleashed last March finally subsided enough to restore some semblance of normality.

Most of the emergency funding — the loans, the repos, he central bank swaps — left the Fed’s balance sheet and it’s been that way ever since. 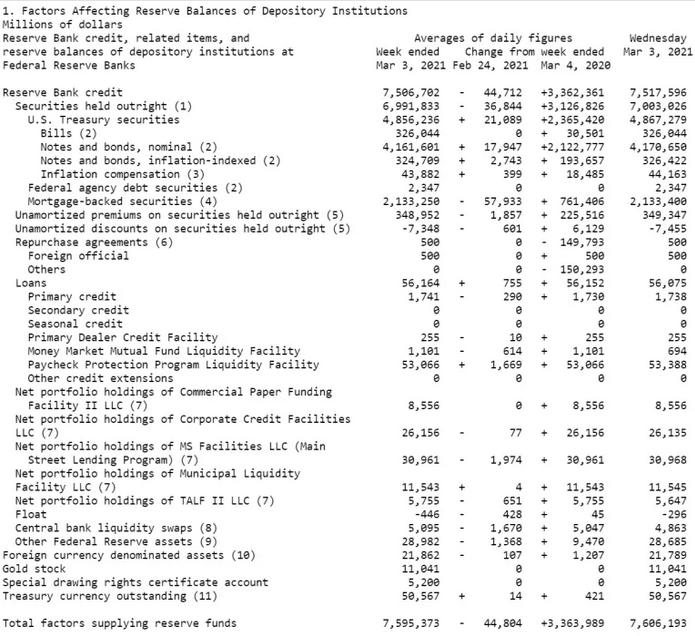 And FOMC Chair Jay Powell isn’t ready to admit to anyone yet that that isn’t exactly what is still going on.

Because Thursday with the eyes of the world on him he gave his prepared speech which tried to spin the story that nothing was wrong.

It’s like that scene in Star Wars when they break into the detention block to rescue Princess Leia.

Solo: Everything’s under control, situation normal
Imperial: What happened?
Solo: Had a slight weapon’s malfunction but everything’s perfectly alright now. We’re fine, we’re all fine here now, thank you… how are you? [cringe]Imperial: We’re sending a squad up [commence pathetic backpedaling by Solo]

The Fed is not yet ready to act. By not letting on to the market he was aware of any problems he was continuing the narrative that rates are rising on rising economic growth because COVID vaccines and the world coming out of its lockdown slumber.

He ignored the historic dislocation in the plumbing of the benchmark 10-year U.S. Treasury Note signifying the world’s most important market was broken. Zerohedge has been all over the story.

Since Powell’s refusal to bail out the markets with soothing words and a cool washcloth on its forehead the howls of anger have been deafening.

And we’re seeing deflation of meme stocks across the board, Tesla (NASDAQ:) being chief among them.

Friday’s intraday ramp was a stick-save for the ages, as big as any since 2011 and reminding us of Greenspan’s historic intervention into the markets on Black Monday in 1987.

Zerohedge noted that, as always, once Europe closed the reversal in stocks began in earnest. It didn’t help matters there that the euro was blasted all day which accelerated into the New York close. 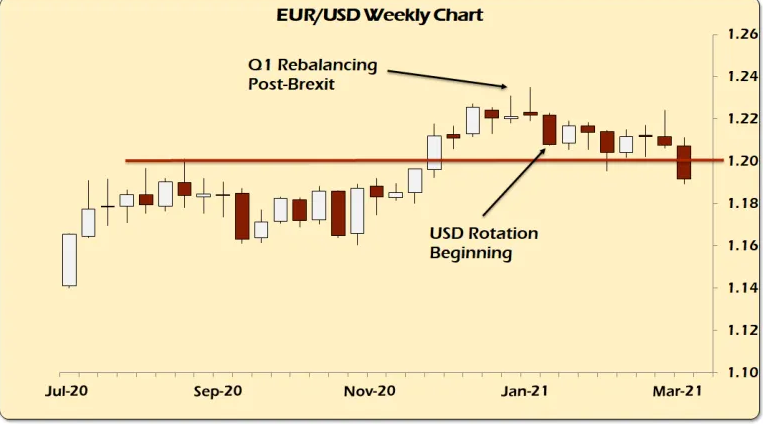 At some point Powell had to stand up for the dollar. It is his job, after all. It’s clear from the weekly chart of the euro there was a lot of money invested in keeping it above $1.20 to keep a lid on European sovereign rates.

But eventually by holding these bond prices well above where the market wants them to go creates a rising pool of skeptics who call the central bankers’ bluff.

That’s what I think happened on Friday and the breakdown in the euro, the melt up in European yields and the massive short position against the UST 10 Yr is all about.

The question I have for you is the following:

Is Powell incompetent or is he just executing a strategy that will foment a crisis which completes the central bank takeover of the monetary system in the West? Or like Han Solo, a bit of both?

Everything that is happening post-inauguration looks like a demolition derby between the governments and central banks to create the very crisis they say we’re leaving in the rearview mirror.

How else can we “Build Back Better” if we don’t first blow up Alderaan?

They know, and have stated, that the current system is broken and that money will need to be unmoored from debt to fill the deflationary hole.

We know they want direct control over the money supply, cutting out the primary dealer banks, who are both an anachronism and a political liability.

Americans aren’t spending but saving, by paying down debt at an enormous rate, the nightmare of Keynesians the world over.

They are unleashing trillions in new spending but cutting back, in the stimulus bill, support for actual Americans whose lives they’ve ruined with lockdowns and public health terrorism.

They have held interest rates at or below zero for so long that when the market makes the slightest move to go somewhere else, it precipitates massive market dislocation in fundamental markets.

Eventually reality always reasserts itself. The central banks are running out of maneuvering space before he entire system collapses. Maybe that’s what they want.

Maybe they think they can maintain their narrative of competence long enough to shift the blame to incompetent governments who have incurred the wrath of their people through inhuman COVID-19 lockdowns and endless psychological torture.

I don’t know at this point. But I can tell you that debt first extends and then destroys all illusions about who is and who isn’t truly solvent.

And over the past few weeks it’s clear there are an increasing number of people who command real amounts of money who don’t buy the narratives the central banks are selling.