There has been no progress on as claims creep lower.

Given margins of error on seasonally adjusted data there has been no progress for five weeks. 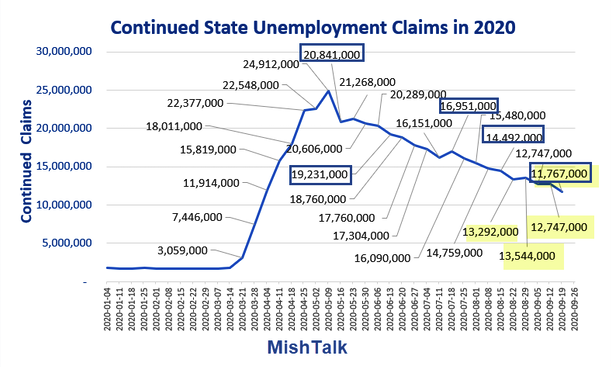 The downward slope (pace of progress) has not changed since May. At the same pace of progress, continued claims will be above 10 million for many months.

It’s continued state claims that determine the official unemployment rate, not that anyone of intelligence believes the BLS number.

The reference week for the unemployment report is the week that contains the 13th of the month. That week is the week ending Aug.15 for the August payroll report. 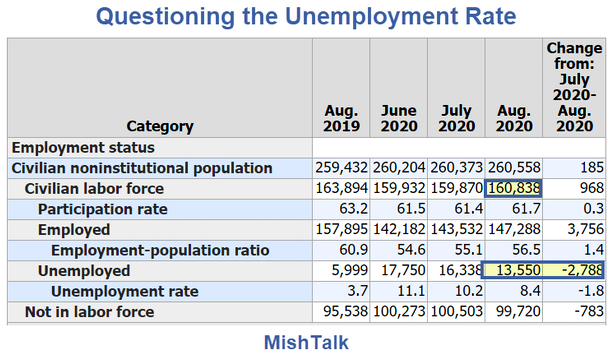 There should be a minimum of 14,492,000 unemployed plus at least several more million gig and self-employed workers who do not qualify for state unemployment insurance.

The continued claims reference week for the September jobs report is the week ending Sept. 19.

The BLS number to note is 11,767,000. Unemployment claims should be at least that number plus 2-3 million more. 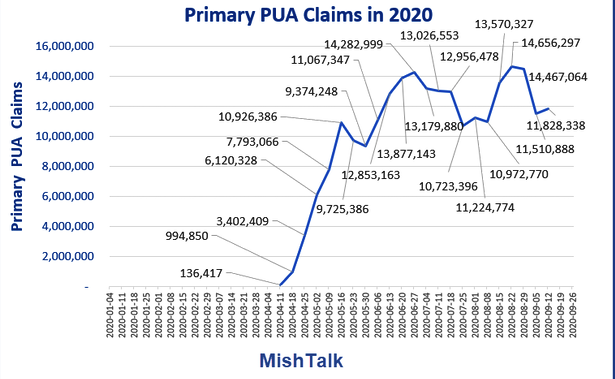 Primary PUA claims are not seasonally adjusted. They lag initial claims by two weeks and continued claims by a week.

They also cover truly unemployed workers not eligible for state claims. People in this category include the self-employed, various gig workers, and anyone who exhausted state benefits.

One either applies for state benefits or Federal PUA, not both. Although there is no double-counting, there is overlap from an unemployment rate point of view. Part-time workers are considered employed.

But some number of those 11.828 million workers are genuinely unemployed. I suspect 2-3 million at a minimum. But they never show up in the unemployment numbers.

Heck, not even continued claims show up in the BLS numbers. 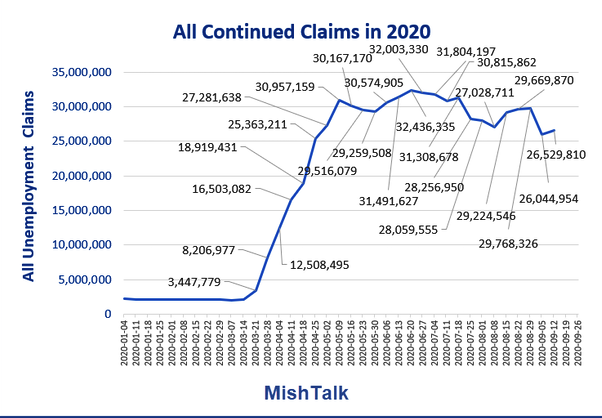 All Continued Claims In 2020

All Continued Claims, like Primary PUA claims, are not seasonally adjusted. They also lag initial claims by two weeks and continued claims by a week.

The total for the latest week is 26.5million. This should realistically feed the U-6 unemployment rate but it doesn’t.

Pandemic benefits expired on July 25. Everyone in any program received $600 weekly benefits. However, Trump did send out $300 weekly checks. Those expired on Sept. 5.

The average number of All Continued Claims between July 25 and Sept. 5 is 28.29 million.

The total is about $147.8 billion that consumers would have spent but didn’t.

Previously I did not account for the $300 weekly benefits and overstated the numbers.

For the reporting period ending Aug. 29 (release date Sept. 3) the BLS made a methodology change.

The BLS did not back adjust the data and the change is suspect as well. Even if the change is accurate, the seasonal charts all reflect disjointed data.