This article was written exclusively Investing.com

The has surged since the start the year. The small-cap index is up nearly 16% since Jan. 1, and is almost 54% higher since Nov. 3 2020. The move higher has been driven by hopes of stimulus and a recovering US economy. But there may be more to the rally than just hope and optimism. Beneath the surface is a short squeeze taking place for months, and now options traders are betting that the rally is coming to an end.

Stocks like Plug Power (NASDAQ:), GameStop (NYSE:), and Novavax (NASDAQ:) account for 3 of the top 4 positions in the iShares Russell 2000 ETF (NYSE:), a tracking ETF of the Russell index. These stocks are also part of the Refinitiv Most Shorted Index. They are among some of the most heavily shorted names in the market. As many already know, these stocks and more have soared, creating an epic squeeze, with short sellers being forced to scramble and cover their positions. 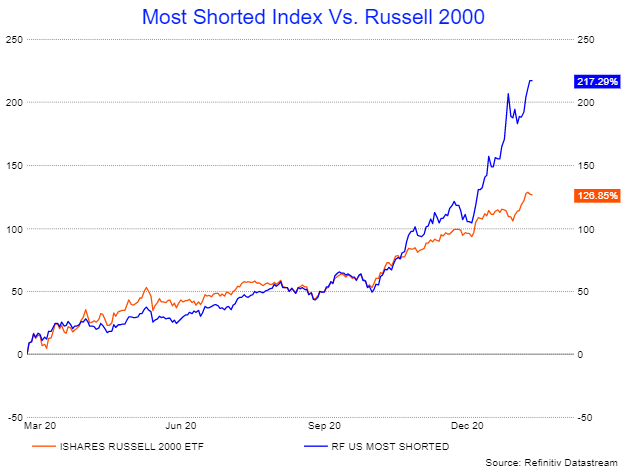 However, there are now options traders betting that this big rally will come to an end and soon. On Feb. 8, the open interest for the IWM Mar. 19 $215 puts rose by almost 33,000 contracts. The data shows the contracts were bought for around $4.40, with premiums paid of more than $14 million. It is a bet that the ETF is trading below $211 by the middle of March, a drop of almost 7%.

Momentum May Be Shifting

The options bets are not the only warning signs. The technical patterns also suggest a reversal may be in the works. The ETF has reached the upper trendline of a broadening wedge pattern, which may have also completed a 5-wave count cycle. This may result in the ETF retracing much of its recent gains and falling back to its lower trend line around a price of $205. That would amount to a decline of more than 9%.

The relative strength index is also flashing a warning sign, and as hit, overbought conditions rising above 70. Additionally, a bearish divergence has formed, as the ETF’s price has made a new high while the RSI has made a lower high.

The diverging pattern is typically present when momentum is starting to change, and momentum has certainly been behind this group’s epic rise. The momentum has been sparked by the promise of economies reopening while receiving a boost from trillions of dollars in fiscal and economic relief. Whether the rally can continue for longer at this current pace is yet to be seen.

However, if there is a trend reversal, it should not come as a surprise, as stocks don’t always go up and tend to fall even faster.