Does the rapid rise in the () price and the slide in the price over the past several months indicate that Bitcoin is sapping demand from gold? The short answer is no, because the performance of gold makes sense without reference to Bitcoin. A longer answer requires discussing the major differences between gold and Bitcoin.

The differences between gold and Bitcoin are far more significant than any similarities. Neither is money in the only practical definition of the term (the general medium of exchange), but gold trades like money. Of particular relevance, the demand to hold money (and therefore gold) tends to rise during ‘busts’ and fall during ‘booms.’ A consequence is that gold generally doesn’t do well when the stock market is ‘bubbling.’

Bitcoin, in contrast, trades like an illiquid commodity, because that’s what it is. No money or widely-used currency in history has ever traded the way Bitcoin has traded and it’s reasonable to assume that none ever will. 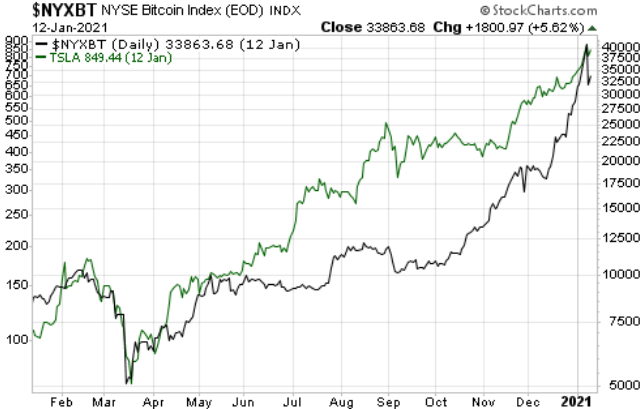 It’s likely that the gold price will embark on its next intermediate-term advance at around the time that the Bitcoin price reaches an important top. That’s not because Bitcoin has been draining demand from gold, but because a top for the Bitcoin price probably will occur at around the same time as a top for speculation in general and a trough in the desire to hold cash reserves.

We still could be a few months away from a major top for speculation in general, so at this time it is still better to be ‘long’ consumable commodities and speculative assets than to be ‘long’ gold.