US indices gained on sliding yields on Monday, but Asian shares pulled back today as the US and other nations sanctioned Chinese officials for human rights abuses.

Today, the overall market appetite will depend on the outcome of the testimony of Fed Chair Jerome and US Treasury Secretary Janet Yellen.

In the FX world, the was the main loser among the G10s, hurt by the decision from New Zealand’s government to take measures in order to cool its hot housing market.

The traded mixed against the other G10 currencies on Monday and during the Asian trading Tuesday. It gained against NZD, , , and in that order, while it underperformed versus , , and . The greenback was found virtually unchanged against and . 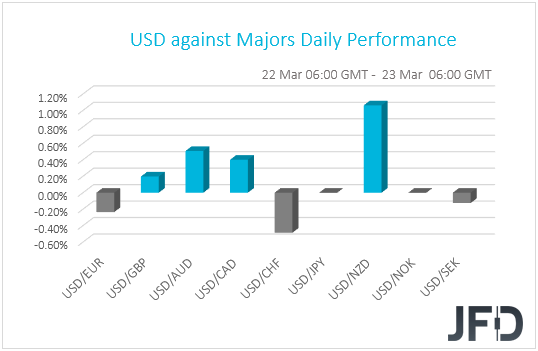 The weakening of the commodity-linked Kiwi, Aussie and Loonie, combined with the strengthening of the safe-haven franc, suggests that markets turned risk off at some point.

Looking at the performance in the equity world, we see that major EU indices traded mixed, with Eurozone’s banks falling and preventing recoveries as the plunged to a near record low after President Tayyip Erdogan replaced a hawkish central bank governor with someone who favors lower interest rates.

US indices traded in the green though, with gaining the most, perhaps due to a pullback in US Treasury yields. That said, during the Asian session today, risk appetite softened after the US and others, including the EU, imposed sanctions on Chinese officials for human rights abuses, with China hitting back with measures against European lawmakers, diplomats, institutes, and families. 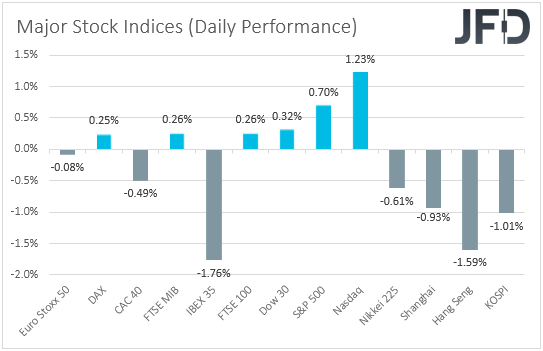 As for today, the overall market appetite will depend on the outcome of the testimony of Fed Chair Jerome Powell and US Treasury Secretary Janet Yellen.

The two officials will testify before the House Financial Services Committee, where they are expected to discuss the economic recovery and how effective monetary and fiscal policies have been.

They will present the same testimony before the Senate Banking Committee on Wednesday. Market participants may be on the lookout for comments on the latest surge in US Treasury yields, but given that we already heard both officials’ opinion on the matter, we don’t expect any surprises.

Yellen’s opinion is that the rise in bond yields represents a robust economic recovery and she does not believe that the economy will run too hot. Powell’s view is that any spike in inflation in the months to come is likely to prove to be temporary, and that inflation will meet the Fed’s goal in the years after 2023.

Remember that at the press conference following last week’s meeting, he noted that it is too early to start discussing tapering QE, while the updated dot plot pointed to no rate hikes even in 2023. With all that in mind, a reiteration of those views may eventually convince some market participants that no normalization is on the cards soon, and thereby support equities. At the same time, the US dollar may come under selling interest.

The New Zealand dollar was the main loser among the G10s as, apart from the weak risk appetite during the Asian session today, it was hurt by the decision from New Zealand’s government to take measures in order to cool its hot housing market, including higher taxes. The government has instructed the RBNZ to take into account house prices when setting monetary policy, which means that following the measures, it may push back the timing of when it expects to start raising rates.

In other words, the RBNZ is now likely to keep rates low for longer than previously expected. With that in mind, we would expect the Kiwi to underperform its Australian counterpart. Yes, both currencies tend to strengthen during risk-on trading, and to weaken when appetite deteriorates, but in , any strengthening or weakening due to the broader market sentiment may be offset.

Thus, we believe that the main driver of this currency pair may be differences in monetary policy between the RBA and the RBNZ, and with the RBNZ now expected to keep low for longer, AUD/NZD is likely to trend north.

Yesterday, the index managed to recover some of its losses made at the end of last week. That said, this morning, the cash index is moving slightly lower. Even if the price does fall a bit lower and the area surrounding the 21-day EMA provides good support, we might see another move higher. For now, we will take a cautiously-bullish approach.

A small decline could bring DJIA to yesterday’s low, at 32431, or to the 21-day EMA. If the price gets a hold-up around there, the bulls might re-enter the field and lift the index back to yesterday’s high, at 32810. If the buying doesn’t stop there, the next potential target could be the current all-time high, at 33230.

Alternatively, if the price suddenly falls below the aforementioned 21-day EMA and then slides below the 32080 hurdle, marked by the highest point of February, that may lead to a larger correction lower, potentially aiming for the 31745 zone, marked by the low of Mar. 10, which also coincides with the 50-day EMA.

Initially, the index might stall there for a bit, but if the sellers are still feeling comfortable, they could drive DJIA to the 31319 level, marked by the low of Mar. 8. Around there, the price may also test a short-term tentative upside support line, drawn from the low of Feb. 1, which might provide additional support.

This morning, AUD/NZD popped above its key resistance barrier, at 1.0842, marked by the highest point of January, this way potentially clearing the path for itself towards higher areas. At the same time, the pair continues to trade above a short-term tentative upside support line taken from the low of Feb. 3.

If the pair continues to balance above that 1.0842 hurdle, there could be more buyers willing to join in. If so, AUD/NZD could make its way to the highest point of October 2020, where it could temporarily stall. However, if the buyers continue to apply pressure, they might overcome that obstacle and aim for the 1.0935 level, marked by the highest point of September 2020.

In order to shift our attention to some lower areas, we would prefer to wait for a violation of the aforementioned upside line. If that happens and the rate then also slides below the 1.0742 hurdle, marked by the low of Mar. 15, that could spook the remaining bulls from the field. More bears could join in and push AUD/NZD to the 1.0710 zone, marked by the low of Mar. 8, where the downmove may get halted for a bit. That said, if the sellers are still strong, they could push the pair further south, possibly aiming for the 1.0640 level, marked by the low of Feb. 26.

During the early European morning, we already got the UK for January. The unemployment rate ticked down to 5.0% from 5.1%, instead of rising to 5.2% as the forecast suggested, while the in employment showed that the economy lost slightly less jobs than expected. With regards to wages, both the including and excluding bonuses rates rose by less than anticipated.

Later in the day, we have the US for February, which are expected to have fallen 6.5% mom after rising 4.3% in January.