The reflation trade remains in high gear. For the moment, it’s reasonable to view this trend as a return to the pre-pandemic period, before the coronavirus crisis roiled bonds markets and slashed yields. The question is whether the recent rebound in rates has legs and indicates that there’s more to the trend than a return to the pre-pandemic “normal”? Unclear, but the answer is forthcoming in the data, including four key metrics that will likely provide early signals of things to come.

The benchmark is an obvious place to start. This influential rate has been trending lower for decades, albeit with periodic but temporary bursts higher. Is this time different? Maybe, but we won’t know for several months at the earliest. The current rebound looks dramatic relative to recent history, but on a longer time scale the jump to 1.38% (Feb. 24) still falls into the category of noise. When does the yield rebound (assuming it continues) transition to signal? No one will ring a bell at a specific rate. Rather, the transition (and attitude adjustment) will come in stages. A rise above 1.50% is a near-term significant mark for strengthening confidence that the upside momentum has room to run. A bigger hurdle is just below 2.0%, the level just before the pandemic hit. Beyond that, if the 10-year rises above the low-3% mark – the previous peak before the latest leg down in recent years – then the case that the decades-long decline has reversed will truly resonate. But we’re a long way from that point and so it’s premature to dismiss the “it’s another bout of noise” argument. 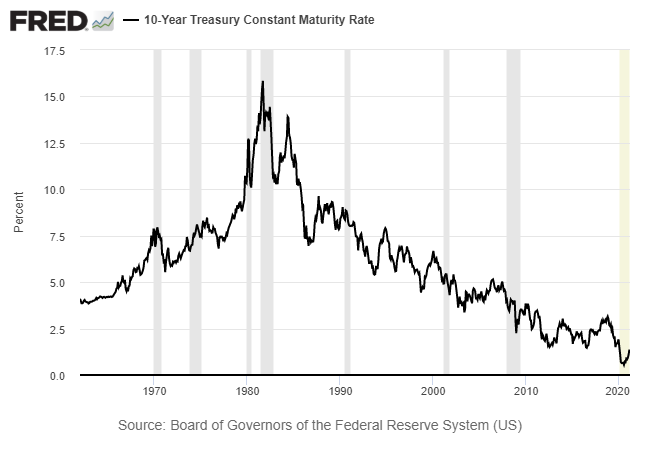 Another crucial indicator to monitor: the Treasury market’s implied inflation forecast, based on the yield spread for nominal less inflation-indexed yields. For the 10-year maturities, for instance, there’s been a clear rebound in recent months. After falling below 1.0% last March, this spread has been trending higher and reached 2.17 yesterday (Feb. 24). This is roughly the level before the pandemic struck and so for the moment it looks like a round trip rather than a change in the inflation outlook. Further, sustained increases from here, however, would be notable and perhaps begin to indicate that reflation is turning into genuinely higher inflation expectations relative to the last several years. 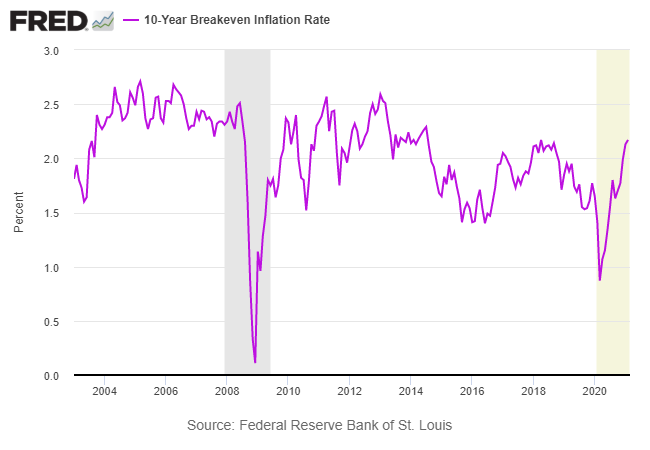 The 10-year/3-month Treasury yield curve also deserves to be on the short list these days. Widely seen as an early, relatively reliable indicator of economic recession/expansion signals, this spread has been recovering lately, rising to 1.35 percentage points yesterday – a four-year high. The main takeaway: the Treasury market is pricing in economic recovery. If this spread continues to rise (fall), the implied probability of the forecast strengthens (weakens). For the moment, the upward bias suggests that rates still have room to rise and the odds of recovery are encouraging . 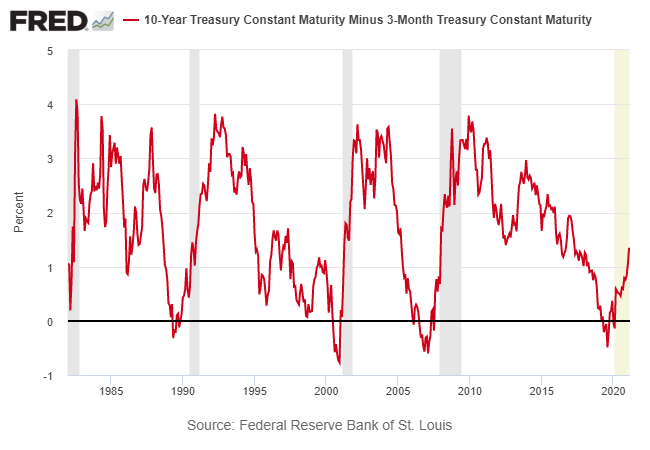 The real (inflation-adjusted) 10-year yield is also a key indicator to watch. Using the inflation-indexed Treasury rate as a benchmark, the real yield remains deeply negative: -0.79% as of Wednesday (Feb. 24). Sub-zero real yields reflect a disinflationary/deflationary bias and suggest that the economic outlook is weaker than it appears otherwise. There’s been a mild recovery recently, but only slightly and a positive real yield is still nowhere on the immediate horizon. But when/if this rate moves above zero, that would be a strong sign that the Treasury market’s economic forecast has turned a corner. Ditto for the crowd’s inflation outlook. 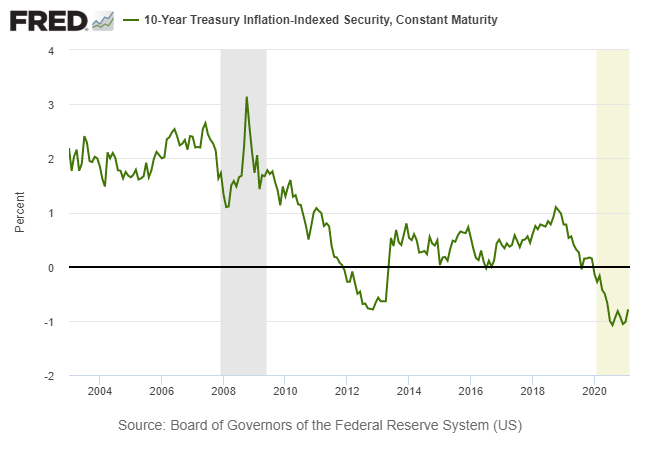