Equities continued to slide on rising bond yields, but the failed to capitalize this time. Usually, higher yields due to concerns of higher inflation are a supportive factor for the US dollar, but, this time, the greenback may have felt the heat of the disappointing . As for today, investors may focus on the preliminary PMIs for February from several Eurozone nations, the Eurozone as a whole, the and the .

The US dollar turned south against all the other G10 currencies on Thursday and during the Asian session Friday. It lost the most ground versus , and , while it underperformed the least versus , , and .

The relative weakness of the safe-havens yen and franc, combined with the relative strength of the , suggests that markets traded in a risk-on fashion yesterday and today in Asia. However, turning our gaze to the equity world we see that this was not the case. Major EU and US indices were a sea of red, with market sentiment being more on the mixed side during the Asia trading today. Japan’s and Hong Kong’s slid 0.72% and 0.21% respectively, but China’s and South Korea’s gained 0.57% and 0.68%. 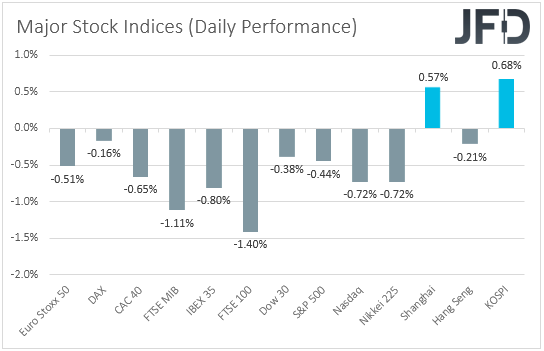 Equities continued to slide on rising bond yields, but the US dollar failed to capitalize this time. Germany’s yield posted its highest close since June yesterday, the UK traded at a 10-month high, while the US stayed near a one-year high. Usually, higher yields due to concerns of higher inflation are a supportive factor for the US dollar, but, this time, the greenback may have felt the heat of the disappointing initial jobless claims, which rose to 861k from an upwardly revised 848k the week before. The forecast was for a decline to 765k. This adds to evidence that the recovery in the US labor market is slowing down.

As for today, investors may focus on the preliminary PMIs for February from several Eurozone nations, the Eurozone as a whole, the UK and the US. Eurozone’s is anticipated to have inched down to 54.3 from 54.8, while the one is forecast to have risen to 45.9 from 45.4. This is likely to drive the composite index fractionally higher, to 48.0 from 47.8. Although a minor improvement, this still points to contraction, and we don’t think that this will affect much the . For the euro to gain, we believe that an upside surprise above 50 may be needed.

In any case, the minutes of the latest ECB gathering revealed that other members shared Lagarde’s view that the downside risks to the economic outlook were now “less pronounced” but added that not every increase in nominal yields should be interpreted as unwarranted tightening, suggesting that monetary policy will stay extra loose. They also said that the projected path of inflation continues to be distant from the inflation target, which comes in contrast with current market expectations over a fast rise in inflation.

There are no forecasts for the UK PMIs, while in the US, both the manufacturing and indices are expected to have slid somewhat, to 58.5 and 57.6 from 59.2 and 58.3. Now, a decent question is: What could be the reaction if we get a positive surprise? Will equities rebound on signs of a faster economic recovery, or will they fall as something like that may also mean faster inflation in the not-to-distant future? As for our view, with the minutes of the latest FOMC gathering confirming that the Fed is likely to stay accommodative for the years to come, and that inflation is expected to overshoot 2% for some time in the years after 2023, we believe that tightening concerns due to higher inflation may start fading, and thereby equities could rebound. For the dollar, it appears to be simpler. Recently, the currency has lost its safe-haven appeal, which means that better prints could prove positive.

After hitting the area near the 3742 barrier on Tuesday, moved lower and is now resting on one of its key support levels, at 3682, marked by the high of Feb. 8. At the same time, the price continues to balance above a short-term tentative upside support line taken from the low Feb. 4. As long as the index remains above both of those obstacles, there is a good chance we could see another push higher. However, to get a bit more comfortable with that idea, a move above the 3710 barrier would be needed.

If, eventually, the price does pop back above the 3710 hurdle, marked by the low of Feb. 15 and yesterday’s high, that may invite more bulls into the field. Euro Stoxx 50 would also be placed above the 21 EMA on our 4-hour chart. The index might end up re-visiting the current highest point of this week, at 3742. If the buying doesn’t stop there, the next target could be at 3775, marked by the low of Feb. 21, 2020.

On the other hand, if the aforementioned upside line breaks, this could lead to a change of the short-term trend. The index may slide to the low of Feb. 12, at 3646, or to the 3624 zone, marked by the low of Feb.10. Euro Stoxx 50 could stall near the latter one, but if the bulls are still feeling weak, this may result in a further slide, where the next target could be at 3597, which is the low of Feb. 4.

On Wednesday, reversed higher and is now seen trading above a short-term tentative upside support line drawn from the low of the Feb. 5. At the time of writing, the pair is trading near all of its EMAs on our 4-hour chart. Although there is a chance for the rate to push higher, a break above the 1.2104 hurdle could strengthen that scenario. For now, we will take a cautiously-bullish approach.

If, eventually, the pair rises above the 1.2104 barrier, marked by an intraday swing low of Feb. 16, which also coincides with the 200 EMA, that may attract more buyers into the game. EUR/USD could travel to the 1.2124 obstacle, a break of which might clear the path to the 1.2169 level. That level is marked by the current highest point of February.

Alternatively, if the rate suddenly drops below the aforementioned upside line and then drifts below the current low of this week, that may invite more sellers into the game, as such a move would confirm a forthcoming lower low. That’s when EUR/USD could drift to the 1.1972 hurdle, a break of which may clear the path to the 1.1952 level, marked by the current lowest point of February.

During the early European morning, the UK for January came out, with both the headline and falling by more than anticipated. Yet the pound remained on an upside trajectory amid Britain’s aggressive vaccination program.

As for the speakers, we have two on today’s agenda and those are Richmond Fed President Thomas Barkin, and Boston Fed President Eric Rosengren.