Equities traded mixed yesterday and today in Asia, with some investors staying optimistic over a potential coronavirus vaccine, and others perhaps starting to worry again over the virus’s economic effects. In the FX sphere, the was the main G10 loser, tumbling on headlines that there was no progress in Brexit talks. With regards to the energy world, oil traders will keep their gaze locked on a potential outcome in the OPEC+ talks.

The continued trading lower against all but three of the other G10 currencies on Wednesday and during the Asian session Thursday. It gained only against GBP, NZD, and JPY in that order, while it underperformed the most versus CHF, AUD and EUR. 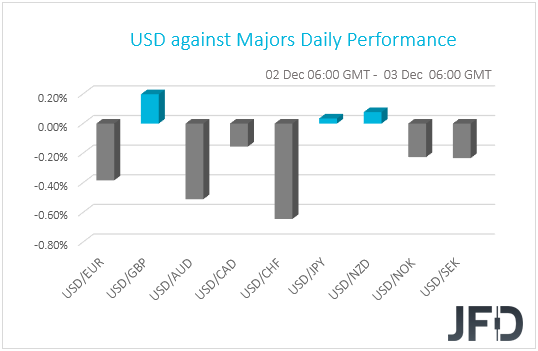 That said, the picture is mixed there as well. In Europe, the German and Italy’s closed in negative waters, while Spain’s and the UK’s ended their session positive. In the US, both the and the finished slightly higher, but slid somewhat. Asian markets were mixed as well. 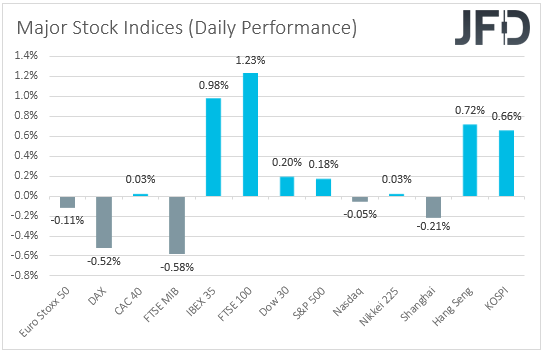 It seems that some investors remained optimistic over a potential coronavirus vaccine, but others may have started worrying again over the economic effects of the virus’s fast spreading, especially after the ADP reported that the US economy has added than anticipated. Specifically, the figure came in at 307k, missing expectations of 410k, something that may have raised concerns that the s, due out on Friday, may also come in below their consensus, which is at 486k.

UK’s FTSE 100 was the main gainer yesterday, with media attributing the gains to Britain’s approval of a COVID-19 vaccine, with 800k doses of the Pfizer (NYSE:) and BioNTech (NASDAQ:) vaccine available starting next week. However, we believe that a huge part of the index’s gains may be owed to the pound’s tumble. Remember that many companies of the index generate profits in other currencies, so in a weakening GBP environment, if those profits are converted to pounds, they’re worth more.

The British currency came under strong selling interest – found as the main G10 loser this morning – after EU Chief Brexit negotiator Michel Barnier said that the main differences between the EU and the UK remain unresolved, adding that a potential trade deal hangs in the balance. With the clock ticking towards the Dec.r 31 deadline, all this increased the chances of a no-deal Brexit.

In our view, the next few days will be crucial for the pound. Barnier said that talks would be thrust into crisis if a UK legislation, expected next week, includes clauses that breach the withdrawal agreement. In such a case, a no-deal Brexit may become an even more realistic outcome and the currency could fall off the cliff. For the pound to rebound, we need to see headlines suggesting that the two sides have found some sort of common ground over their main differences, which are fisheries, governance, and level playing field.

GBP/CHF has been in a down-move from the beginning of this week. It is also trading below a steep short-term tentative downside resistance line taken from the high of Dec. 1. As long as that downside line stays intact, there is a good chance that the pair may continue drifting further south. To strengthen that idea, a break below the current low of this week, at 1.1910, would be needed.

If the rate continues the slide and drops below the aforementioned 1.1910 hurdle, this will confirm a forthcoming lower low, potentially setting the stage for a move to the 1.1895 obstacle, or even to the 1.1867 territory, marked by an intraday swing high of Nov. 9. could stall there for a bit, or even correct up again. That said, if the pair remains below the previously-mentioned downside line, another round of selling might be possible. If this time the bears are able to overcome the 1.1867 area, the next possible support target could be at 1.1807, or at 1.1792, which are marked by the lows of Nov. 9 and 5 respectively.

On the other hand, if the previously-discussed downside line breaks and the rate travels above the 200 EMA on our 4-hour chart and the rate climbs above the 1.2010 barrier, marked by the low of Nov. 30, that might signal a change of the short-term trend. More bulls could jump into the action and lead GBP/CHF to the 1.2085 hurdle, which is the high of Dec. 2. If the buying doesn’t stop there, the next possible target may be the current high of this week, at 1.2154.

Passing the ball to the energy sector, today, oil traders are likely to keep their gaze locked on the OPEC+ meeting, where members will decide whether to increase production on extend the existing curbs. After earlier talks failed to result in a consensus, members are resuming discussions today to agree on policies for the new year.

Expectations are for a three-month extension of the existing output cuts, but following the rally in prices on the positive coronavirus vaccine headlines, some members may have changed their minds, now supporting an output increase. In our view, a three-month extension is unlikely to result in a major movement in oil prices as this is still the base case scenario. Now in case the extension is six months or more, oil prices are likely to gain, while in case we do get an output increase, we may see a slide.

After a decent run to the upside throughout the whole of November, is now consolidating, while still balancing above a short-term tentative upside support line drawn from the low of Nov. 13. At the same time, the area between the 48.84 and 49.10 levels continues to provide resistance. For now, we will take a cautiously-bullish approach and wait for a break above that resistance area, in order to get comfortable with examining higher levels.

If, eventually, the price does rise above the 49.10 barrier, marked by the highest point of November, that would confirm a forthcoming higher high, potentially setting the stage for a further move north. We will then target the 49.54 obstacle, which is the lowest point of February. If that obstacle is not able to withstand the bull pressure and breaks, the next aim might be at 50.88, marked by the high of Mar. 6.

Alternatively, if the commodity drifts back down, breaks the aforementioned upside line and then slides below the current low of this week, at 46.90, that would confirm a forthcoming lower low. Such a move may invite more sellers into the game, resulting in a further decline of the price. The next target might be at 46.00, which if broken could open the door for a move to the 45.11 and 44.77 levels, marked by the highs of Nov. 11 and 18 respectively.

Besides a possible outcome in the OPEC+ talks, we also have some data releasees on today’s agenda. During the European morning, we get Eurozone’s retail sales for October, which are forecast to have rebounded 0.8% mom after falling 2.0% in September. In the US, the ISM for November is anticipated to have slid to 56.0 from 56.6, while the initial jobless claims for last week are expected to come in close to their prior print (775k vs 778k).