Equities rebounded yesterday during the US session, with the positive morale rolling into the Asian trading today, following more positive headlines over COVID-19 vaccines. In the FX world, GBP-traders are likely to keep their gaze locked on the meeting between UK PM Boris Johnson and EU Commission President Ursula von der Leyen. In Canada, the nation’s central bank decides on monetary policy.

The traded lower against the majority of the other G10 currencies on Tuesday and during the Asian session Wednesday. It underperformed the most versus NZD, CHF, and AUD in that order, while it gained only against SEK, CAD, and JPY. 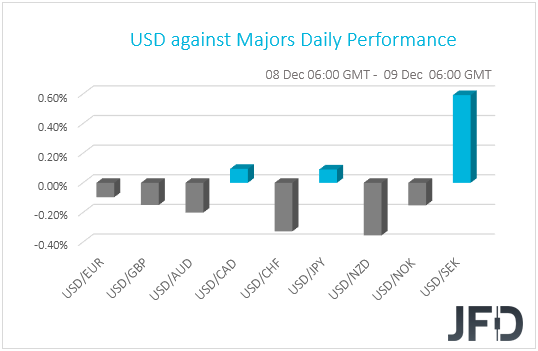 The weakening of the US dollar and the , combined with the strengthening of the and the , suggests that markets turned to risk-on at some point yesterday. However, the strengthening of the points otherwise. Thus, in order to get a clearer picture with regards to the broader market sentiment, we prefer to turn our gaze to the equity world. There, most major EU indices closed in negative territory, but US equities traded in the green, with all three of the main indices hitting fresh all-time highs. The positive investor morale rolled over into the Asian session today as well. The only exception was China’s , which fell 1.12%. 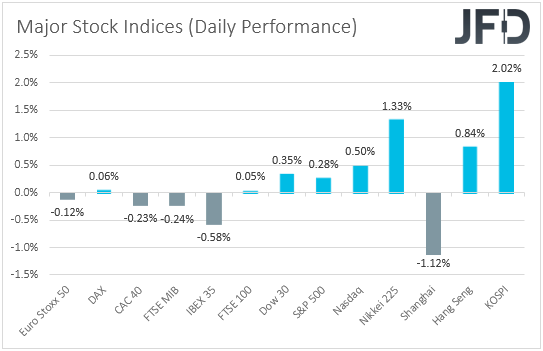 What encouraged market participants to buy back stocks may have been more positive headlines over COVID-19 vaccines. Johnson & Johnson (NYSE:) said that it could obtain late-stage trial result of a single-dose vaccine in January, which is earlier than expected, while Pfizer (NYSE:) and BioNTech (NASDAQ:) cleared the next hurdle in the race to get their vaccine approved for emergency use, after the US health regulator noted no new safety or efficacy issues. All this adds more credence to our view for further upside in equities and other risk-linked assets. Remember that, recently, we’ve been repeatedly noting that the vaccine prospects, combined with a Biden Presidency in the US, are likely to keep sentiment supported in the foreseeable future.

In the FX world, pound traders are likely to keep their gaze locked on developments surrounding the Brexit saga. UK PM Boris Johnson will meet EU Commission President Ursula von der Leyen in Brussels today, in a last-ditch attempt to close their differences-gap before Thursday’s EU summit. This will be the last summit of the year, and thereby, the last official chance for the two sides to seal a deal.

We think that the is likely to be very responsive to the outcome of the aforementioned meeting. Anything suggesting that there is hope for common ground is likely to prove positive for the currency, while headlines pointing to disagreement could push it off the cliff, as this would increase the chances of a no-deal Brexit at the end of the year. Something like that would also increase speculation for the BoE adopting negative interest rates in the months to come, which is another negative for sterling.

So far, continues to trade above its short-term upside support line drawn from the low of Nov. 23, despite the recent decline. The pair also continues to float above the 21 EMA on our 4-hour chart, which keeps the near-term outlook positive. If the rate pushes further away from that 21 EMA to the upside, we will start aiming for higher areas. For now, we will take a somewhat positive approach.

A push above the 0.9067 barrier, marked by the high of Dec. 4, could attract more buying interest, potentially helping EUR/GBP to move towards the next possible resistance zone, at 0.9116. That zone marks yesterday’s high, which may initially stall the upmove. That said, if the bulls are still feeling comfortable, a break of that area might open the way towards the 0.9142 hurdle, or the 0.9148 level, marked by the highs of Dec. 7 and Oct. 20 respectively.

Flying to Canada, the nation’s central Bank will announce its today. However, as we noted on Monday, we don’t expect this Bank to rock the boat this time around. At its latest meeting, the BoC kept interest rates unchanged and scaled back its QE program, noting that the economic outlook has evolved largely as anticipated in the July Monetary Policy Report. Since then, inflation has accelerated and economic growth for Q3 has rebounded strongly. What’s more, data on Friday, showed that the unemployment rate fell more than expected, with the economy adding more jobs than the market has forecasted. 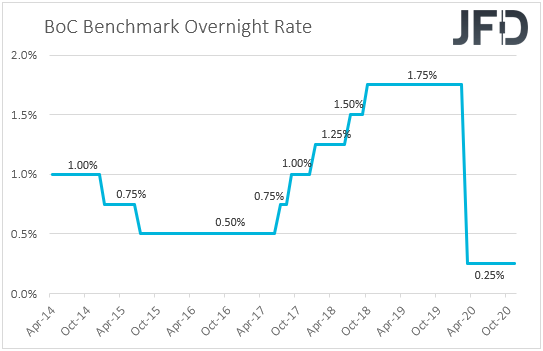 With all that in mind, someone could argue that policymakers could scale back even more their QE program, but bearing in mind that they did so just at the prior meeting, we don’t expect any action this week. We may get a somewhat more sanguine language in the meeting statement, which could prove positive for the Canadian dollar. Having said that, we believe that, as a commodity-linked currency, the Loonie is likely to stay mainly driven by the broader market sentiment and especially by movements in oil prices. Remember that, last week, when oil prices spiked higher on the OPEC’s decision, the Loonie gained as well.

After finding strong support between the 1.2767 and 1.2772 levels, is now seen moving sideways, but it remains below a short-term tentative downside resistance line taken from the high of Nov.23. Although the current trend is still to the downside, we would still prefer to wait for a violation of the above-mentioned support area first, before examining a potential further move lower.

A drop below the 1.2767 hurdle, marked by yesterday’s low, will confirm a forthcoming lower low, potentially setting up the stage for further declines. More bears might see it as a good opportunity to step in and drive the rate to the 1.2729 zone, or to the 1.2676 level, which is the high of April 19, 2018.

On the other hand, if USD/CAD gets a strong boost, which helps it to break the aforementioned downside line, that may change the direction of the current trend. This idea could get supported even more if the pair climbs above the 1.2907 barrier, marked by the low of Dec. 2. The rate might rise higher to the 1.2958 hurdle, marked by the high of Dec. 2, where it may stall for a while, or even correct back down a bit. That said, if the pair stays above the previously discussed 1.2910 area, that may help the bulls get back into the game again and push the rate higher. If USD/CAD is able to move above 1.2958 barrier this time, the next potential target could be at 1.3010, or at 1.3029, marked by the highs of Nov. 30 and 25 respectively.

In Europe, we have Germany’s for October, while in the US, we get the for the same month.

With regards to the energy market, we have the EIA (Energy Information Administration) on crude oil inventories for last week. Expectations are for a 1.424mn barrels slide after a 0.679mn decline the week before. However, bearing in mind that, yesterday, the API a 1.141mn barrels increase, we would consider the risks of the EIA forecast as tilted to the upside.