EU indices and the gained on Monday, after the EU and the UK agreed to continue negotiations with regards to a potential trade deal. That said, sentiment changed later in the day, with the soft morale rolling into the Asian session today on reports that China has banned imports of Australian coal. The fell as well, and it was found as the main loser among the G10s this morning.

The US dollar traded mixed against the other G10 currencies on Monday and during the Asian session Tuesday. It gained against AUD, , JPY, and in that order, while it underperformed versus , , CHF, GBP, and . 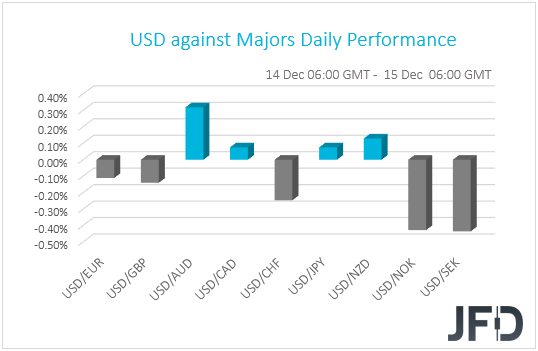 The weakening of the Aussie and the , combined with the strengthening of the , suggests that markets turned risk off at some point yesterday. However, the weakening of the points otherwise. Thus, in order to get a clearer picture with regards to the broader market sentiment, we prefer to turn our gaze to the equity world.

There, all but one of the major EU indices traded in the green, with the only exception being UK’s . It seems that European investors may have cheered a decision between EU and UK negotiators to extend talks over a potential trade deal. The FTSE 100 may have lost ground due to the strengthening of the British pound. That said, sentiment changed during the US session, with both the and the losing 0.62% and 0.44% respectively, although the former hit a fresh record high early in the session. gained 0.50%. The soft sentiment rolled over into the Asian session today, and this may have been the result of reports saying that China has banned imports of Australian coal. 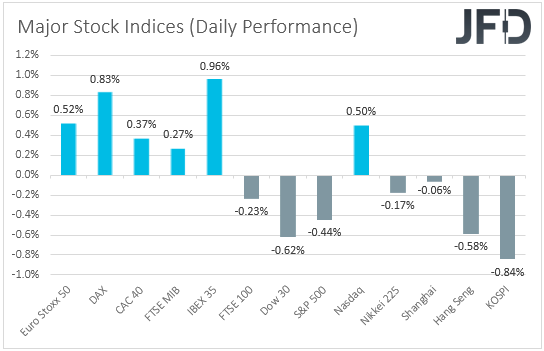 In any case, yesterday’s setback in equities does not change our view. We still believe that at the turn of the year, risk-on is likely to prevail. The beginning of vaccinations suggests that the worst with regards to the coronavirus may be behind us, but this is conditional upon no side effects, while another positive for market sentiment may be a Biden Presidency in the US, as the new President is expected to adopt a softer stance on global trade than Trump did. Thus, even if the current retreat continues for a while more, we would just consider it as end-of-year profit taking, and we would expect a rebound soon.

In the FX world, the pound opened its Monday trading with a large positive gap on the headlines with regards to the extension of the trade talks, and kept drifting north after EU Brexit negotiator Michel Barnier said that sealing a trade pact with Britain before Dec. 31 was still possible. That said, the British currency gave back a decent portion of its gains later in the afternoon.

Even though there is a BoE on this week’s agenda, as well as several UK data, we stick to our guns that the pound is likely to stay mostly sensitive to headlines and developments surrounding the political landscape. Anything suggesting that the two sides are getting closer in sealing a trade accord could result in more positive waves, while reports hinting that the differences-gap is not narrowing could hurt the currency.

Flying from the UK to Australia, the Aussie was the main loser among the G10s, hurt by the news that China banned imports of Australian coal. Australia’s and China’s trading ties have been very tight, at least until now, and such developments raise concerns over their future relationship. Nonetheless, if the reports are not confirmed, or if this is just a sole incident that does not escalate further, we would expect the Aussie to rebound at some point soon, even if it corrects a bit lower. As we already noted, we believe that the broader market sentiment will stay supported, something that would keep the risk-linked Aussie under buying interest, especially against safe havens, like the US dollar and the Japanese yen.

Although, overall, is still trading below a short-term tentative downside resistance line drawn from the high of Dec. 4, from the short-term perspective, the pair still has a chance of drifting a bit more to the upside. This is why, for now, we will continue aiming slightly higher.

If the rate is able to push above the current high of today, at 138.92, this might attract a few more buyers into the game, who could help lift the pair a bit higher. GBP/JPY may then travel to yesterday’s high, at 139.43, a break of which could clear the way towards the aforementioned downside line. That downside line may halt the up move for a bit until the bulls and the bears decide who takes control from there.

Alternatively, if GBP/JPY ends up sliding again and falls below the 138.26 hurdle, marked by yesterday’s low, that might invite a few extra sellers into the arena, as the rate would already be placed below the 200 EMA on our 4-hour chart. The pair might then drift to 137.90, or to the 137.68 hurdle, marked by an intraday swing high of Dec. 11. If the slide continues, the next possible target may be at 137.14, which is an intraday swing low of Dec. 11.

Despite declining slightly yesterday, continues to balance above a short-term upside support line taken from the low of Dec. 7. Even if we see another small downmove, as long as that upside line stays intact, we will stay positive, at least with the near-term outlook.

As mentioned above, another drop, but a failure to break the aforementioned upside line, could result in a rebound, which might bring the pair back to yesterday’s high, at 0.7578. AUD/USD may stall there for a while, however, if the bulls are still feeling a bit more comfortable than the bears, the 0.7578 barrier could get broken, this way confirming a forthcoming higher high. The next potential target might be the 0.7625 level, marked by the high of June 12.

On the other hand, if the aforementioned upside line breaks and the rate falls below the 0.7485 hurdle, marked by the high of Dec. 9, that could change the direction of the current short-term trend and open the door to some lower areas. AUD/USD may slide to the 0.7423 zone, marked by an intraday swing low of Dec. 9, where the pair might get held temporarily. That said, if the bulls are still feeling weak, the bears could remain in control, this way sending the rate further south. AUD/USD might end up moving to the 0.7399 territory, or to the 0.7372 level, marked by the low of Dec. 7.

During the early European morning, we already got the UK report for October, which came in better than expected. However, the report passed unnoticed by GBP-traders, confirming our view that the only game in town for them is Brexit.

Later in the day, we have Canada’s and the US , both for November. Canada’s housing starts are expected to have held relatively steady, while the US IP is anticipated to have slowed to +0.3% mom from +1.1%.

With regards to the energy market, we get the API (American Petroleum Institute) report on crude oil for last week, but as it is always the case, no forecast is available.