EU indices gained yesterday, but the US and Asian ones traded in a more cautious manner, perhaps as investors turned more careful ahead of the FOMC later today. We believe that Fed Chair Powell will once again downplay the idea of QE tapering, with the Committee staying ready to expand its stimulative efforts if deemed necessary.

Investors Turn Cautious Ahead Of The FOMC

The US dollar traded lower against all but two of the other G10 currencies on Tuesday and during the Asian session Wednesday. It underperformed the most against , and in that order, while it gained slightly only versus . The greenback was found nearly unchanged against . 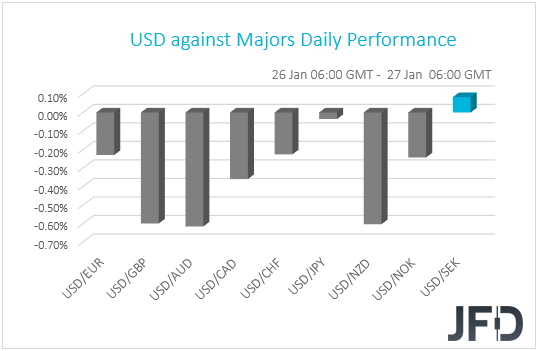 The weakening of the US dollar and the Japanese yen, combined with the strengthening of the and , suggests that markets traded in a risk-on fashion yesterday and today in Asia. Indeed, EU shares were a sea of green, perhaps driven by strong earnings from wealth manager UBS and auto parts maker Autoliv (NYSE:), as well as by the fact that the IMF raised its forecast for global growth in 2021. However, US indices closed slightly lower, with investors’ appetite, although improving somewhat, staying on the cautious side during the Asian session today as well. Japan’s , China’s and Hong Kong’s gained only 0.31%, 0.11%, and 0.08% respectively, while South Korea’s fell 0.57%. 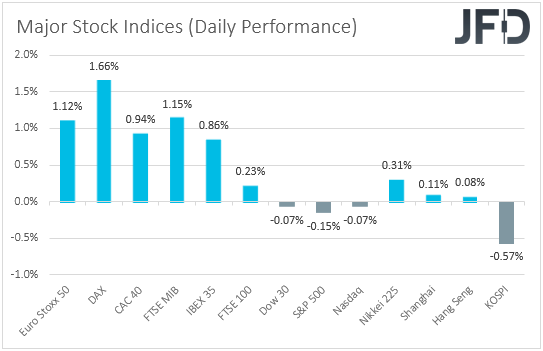 With no clear catalyst behind the easing in risk appetite, we believe that investors may have turned more cautious ahead of the FOMC decision later today. According to the minutes, at the latest meeting some members noted that they could consider further adjustments to their QE purchases, such as increasing the pace of purchases, or weighting them towards longer maturities, while others said that once progress towards their goals had been attained, a gradual tapering could begin. However, several officials, including Fed Chair Powell, pushed back the idea of tapering anytime soon. Although speculation on that front may have been revived after US President Joe Biden revealed a USD 1.9 trln spending package, with inflation staying below the Fed’s objective of 2%, we believe that Jerome Powell will stick to his guns and downplay once again the idea of scaling back QE, while we see the case for the Committee to keep the door open for further easing if deemed necessary. 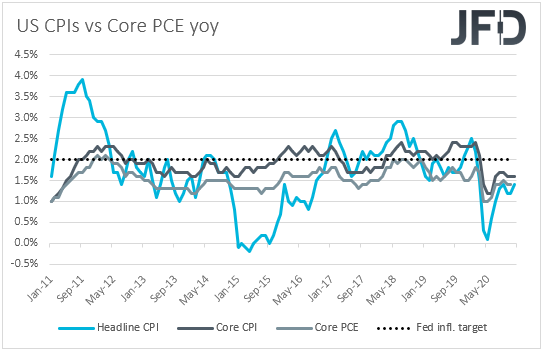 A Fed ready to do whatever it takes to support the world’s largest economy, regardless what the government’s actions may be, is likely to prove negative for the USD dollar, and perhaps positive for stocks. In other words, we believe that a dovish message could reignite the risk-on trade. With that in mind, we prefer to exploit any USD weakness against currencies which we expect to benefit from an upbeat market sentiment, the likes of the risk-linked Aussie and Kiwi. On the other hand, safe-havens like the Japanese yen, are likely to stay under selling interest.

Yesterday, after hitting a new all-time high on our cash index, the drifted back down a bit, making its way closer to the short-term upside support line, drawn from the low of Dec. 21. Even if the index corrects a bit lower, as long as it remains somewhere above that upside line, we will remain positive, at least with the near-term outlook.

A slight push lower could bring the rate to the 3829 hurdle, or to the 3820 zone, marked by yesterday’s low and the low of Jan. 22. A bit lower runs the aforementioned upside line, which might provide additional support. If so, the index may rebound and make its way back to the all-time high, at 3870. If the buyers are still active, they might push the price further up, this way placing the S&P 500 into the uncharted territory.

Alternatively, if the index falls below the previously-mentioned upside line and then slides below the 3797 hurdle, marked by the current low of this week, that may temporarily spook the bulls from the field. More bears might join in, this way sending the S&P 500 further south. That’s when we will aim for the 3779 obstacle, or even the 3748 level, marked near the lows of Jan. 15 and 18.

After reversing to the upside on Jan. 19, started climbing higher, while balancing above a short-term tentative upside line taken from the low of that day. So far, the price structure is of higher lows and higher highs. That said, in order to get comfortable with further advances, a push above yesterday’s high, at 0.7247, would be needed.

If NZD/USD manages to climb above the 0.7247 barrier, this will confirm a forthcoming higher high, possibly clearing the way to the 0.7281 hurdle, which is the high of January 8th. Around there, the pair might stall for a bit, or even correct slightly lower. However, if the rate continues to balance somewhere above the 0.7247 area, another round of buying could be possible. The bulls may then try to overcome the 0.7281 obstacle, and if successful, the next target might be at 0.7315, which is the current highest point of January.

On the other hand, if the rate falls below the aforementioned upside line and then drops below the 0.7166 zone, marked near the lows of Jan. 22 and 26, that might open the door for further declines, as a forthcoming lower low would be confirmed. NZD/USD could then drift to the 0.7148 obstacle, or to the 0.7127 hurdle, marked by an intraday swing low of Jan. 20. If the selling doesn’t stop there, the next target might be at 0.7102, which is the low of Jan. 19.

Ahead of the FOMC decision we get the US orders for December. Headline orders are expected to have slowed fractionally, to +0.9% mom from +1.0%, while the core rate is forecast to have ticked up to +0.5% mom from +0.4%. The EIA (Energy Information Administration) on crude oil inventories for last week is also coming out and expectations are for a slowdown to 0.430mn barrels from 4.351mn the week before. However, bearing in mind that, yesterday, the API (American Petroleum Institute) a 5.272mn barrels slide, we would consider the risks surrounding the EIA forecast as tilted to the downside.

As for tonight, during the early Asian morning Thursday, New Zealand’s for December is coming out, but no forecast is currently available.