James Bullard, president of the Federal Reserve Bank of St. Louis, says all signs are pointing to inflationary pressures building this year, though he agrees with his colleagues on the Federal Open Market Committee that some increase in will not only be tolerated but welcome.

In an analysis on the bank’s website, Bullard says all three classic indicators of inflation—increased money supply, increasing federal deficits, and the Phillips curve tradeoff between employment and inflation—are pointing to higher inflation.

“Perhaps the most important reason why inflation might be headed higher than it has been since 2012 has to do with Federal Reserve policy,” Bullard continues. The monetary policy framework adopted in August replaces preemptive action to head off inflation with a that will let inflation run its course for a while.

According to Bullard, the Fed is:

“…now more likely to allow inflation to develop to a certain degree and allow that to feed into inflation expectations. As a result, the U.S. could see somewhat higher inflation.”

This fits in with the party line that inflation will increase, but not to worry, the Fed is on top of the situation and welcomes the prospect of inflation above 2%.

The question for investors is whether Fed policymakers are too optimistic about their ability to intervene in time to keep a lid on inflation. 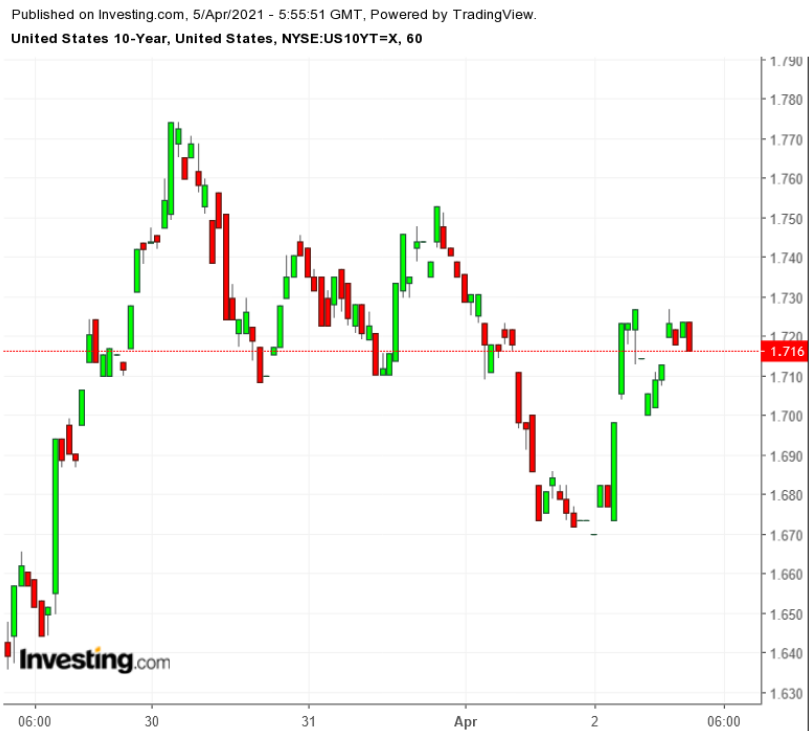 The blowout increase in for March, with added jobs jumping to 916,000 after forecasts of 675,000, caused the yield on the benchmark Treasury note to spike back above 1.72% Friday in a trading session shortened by the Easter holiday.

This was still short of the 1.77% hit earlier in the week as nervous investors sold off Treasuries for fear of inflation, but trading this week should make it clear what investors are thinking about inflation and interest rates.

Randal Quarles, who is the Fed vice chair for supervision, emphasized in a television interview that the FOMC is committed to getting inflation above 2%.

“Under the new framework, you would wait to see that you actually see movement,” he said. “We shouldn’t jump the gun. Let’s wait to see those outcomes.”

Fed policymakers are working hard to allay investor fears about this new policy. Christopher Waller, who won Senate confirmation to join the board of governors late last year, used his maiden speech in that position last week to reassure investors that the Fed wasn’t keeping interest rates low to make it cheaper for the government to finance its swollen deficit.

In a webcast speech for the Peterson Institute of International Economics, the newly minted governor said:

“Because of the large fiscal deficits and rising federal debt, a narrative has emerged that the Federal Reserve will succumb to pressures (1) to keep interest rates low to help service the debt and (2) to maintain asset purchases to help finance the federal government. My goal today is to definitively put that narrative to rest. It is simply wrong. Monetary policy has not and will not be conducted for these purposes.”

Meanwhile, speculation is growing about how President Joseph Biden will put his stamp on the Fed with a raft of upcoming appointments.

The opening for a seventh member of the board may be filled by Lisa Cook, an economist at Michigan State University, who would tilt the board even further toward a dovish stance in favor of prioritizing employment over interest rates.

Quarles’ term as vice chair for supervision ends in October and an announcement on a reappointment or a replacement usually comes several months beforehand. Likewise, the term of Richard Clarida as vice chairman of the board expires in January.

The biggest question is whether Biden will reappoint Jerome Powell to a second four-year term as chairman when his current term expires in February.

Powell seems ready to continue but the administration’s emphasis on diversity and inclusion might dictate replacing him with Fed Governor Lael Brainard or Atlanta Fed chief Raphael Bostic, the first African American head of a Fed regional bank.