The slid against all of its major peers, while equities gained as the Fed kept its policy unchanged and signaled that are likely to stay at present levels even through 2023.

As for today, it is the turn of the , which we expect to maintain a degree of optimism, something that may help the gain more, while later, the central bank torch will be passed to the , with sources saying that it will widen its yield band.

The US dollar fell against all the other G10 currencies on Wednesday and during the Asian session Thursday. It lost the most ground versus , and in that order, while it underperformed the least against and . 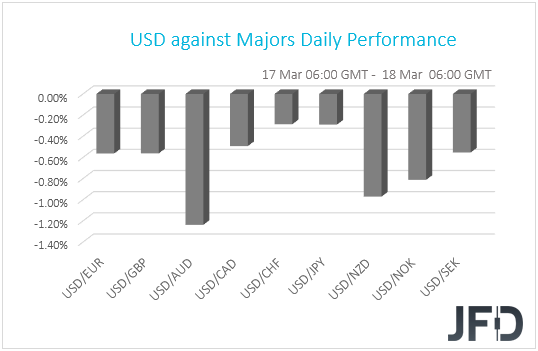 The weakening of the US dollar, the strengthening of the risk-linked Aussie and Kiwi, as well as the relative weakness of the safe-haven Japanese yen and Swiss franc, suggest that markets traded in a risk-on fashion yesterday and today in Asia. Indeed, looking at the performance in the equity world, we see that, although major EU indices traded mixed, the US and Asian ones were a sea of green, with the and the hitting fresh all-time highs. 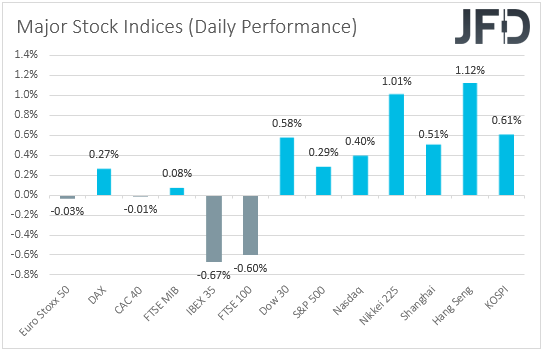 The main event on yesterday’s agenda was the FOMC monetary policy decision. Policymakers decided to keep all their policy settings unchanged via a unanimous vote, noting that bond purchases will continue until substantial further progress has been made towards their maximum employment and price stability goals. As far as the new dot plot is concerned, 4 members voted for hikes in 2022, while 7 members saw rates higher in 2023, but the median dots suggested that interest rates are likely to stay at present levels even in 2023.

Even though officials upgraded their economic and inflation forecasts—inflation is seen at 2.4% this year—Fed Chair Jerome Powell clearly said that this will be temporary and would not meet their standards. He also stuck to his guns that it is too early to discuss tapering QE.

Despite the optimism surrounding the economy, it seems that the Fed appeared more dovish than many may have expected and thus, the dollar fell and equities gained. It appears that some market participants may have been expecting to see more members voting for higher rates in 2023, or at least provide hints that tapering may be on the cards soon. In any case, the outcome is in-line with our view, although we expected the dollar to react more moderately.

Remember that we expected officials to stay dovish, as several of them noted that any spike in is likely to prove to be temporary, while the minutes of the previous meeting clearly revealed that inflation is likely to rise and stay for some time above 2% in the years after 2023.

Yesterday, NZD/USD broke above the 0.7240 hurdle, which is the high of last week, and today, the pair continued to push higher. At the same time, the rate was sitting well above a short-term tentative upside support line taken from the low of Mar. 9. Given all of the above reasons, we will stay positive for now and continue aiming for higher levels.

The pair may correct back down from there, however, if it remains somewhere above the 0.7240 zone, the bulls might take advantage of the lower rate and lift it up again. If this time, the above-discussed resistance area breaks, this could open the door for a push to the 0.7364 level, marked by an intraday swing low of Feb. 24 and an intraday swing high of Feb. 26.

In order to shift our attention to some lower areas, we would prefer to wait for a violation of the aforementioned upside line and a rate-drop below the 0.7153 hurdle, marked by yesterday’s low. This way, we might start aiming for the 0.7131 obstacle, a break of which could set the stage for a push to the 0.7100 level. That level marks the current lowest point of March.

Today, the central bank torch will be passed to the Bank of England.  At its last gathering, this Bank kept its policy unchanged and pushed back the idea of negative interest rates. The central bank said that British banks will need at least six months to prepare for a shift into negative interest rates, but that doesn’t mean that the central bank is intended to set a negative rate at some point in the future. It was just concluded that it would be appropriate to start preparations in order to provide the capability to do so if necessary. 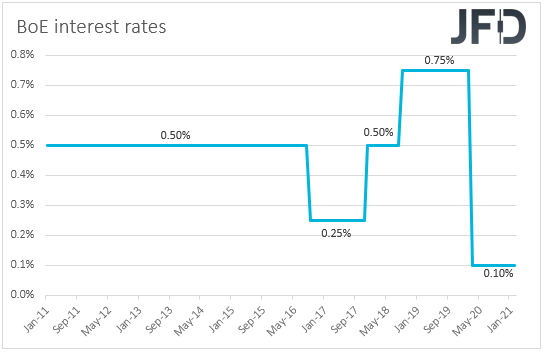 With BoE policymakers being aligned with the relaxed views of the Fed over the recent rally in bond yields around the globe, we believe that they have no immediate plans to counter the market reaction. Thus, taking also into account that the COVID vaccinations proceed very well in the UK, we believe that this Bank is likely to maintain a degree of optimism, which may allow the pound to perform well, especially against the US dollar and the safe-haven yen and franc.

During the Asian morning Friday, we’ll have another central bank deciding on monetary policy—the Bank of Japan. At their previous meeting, officials of this Bank kept monetary policy unchanged, and revised up their economic forecasts for the next fiscal year. However, they repeated that they will take additional steps without hesitation if deemed necessary.

With this Bank committed to keeping its long-term government bond yields around zero, we don’t expect any major reaction to the recent rally in other nations’ yields. After all, this is something negative for the yen, which works in favor of the Bank, as it may help boost the nation’s inflation.

However, the Nikkei newspaper reported that the Bank will widen the band around the 10-year JGB yields to tolerate rises and falls of 0.25%. By allowing yields to fluctuate more, the BoJ will help ease the strain ultra-low interest rates and a flattening yield curve inflict on financial institutions’ profits, the newspaper said.

The Japanese yen may strengthen somewhat if this is the case, but, overall, we expect it to continue to trend south. With inflation fears fading, market sentiment is likely to stay supported, which is negative for the safe-haven yen.

Overall, continues to trade above a short-term upside support line drawn from the low of Feb. 4. Although the trend is still to the upside, the pair is currently struggling to overcome one of its key resistance barriers, at 152.24, marked by the high of Mar.12. In order to go for higher areas a push above that barrier is needed. Nevertheless, we will remain positive, at least for now.

If, eventually, the rate pops above that 152.24 obstacle, this will confirm a forthcoming higher high, potentially inviting more bulls into the field. GBP/JPY might then travel to the 152.74 territory, which is the high of Apr. 26. The pair could stall there for a while, however, if buyers still didn’t get enough action, they may continue applying pressure, in order to send the rate towards its next possible resistance level, at 153.85, marked by the highest point of April 2018.

On the other hand, if the aforementioned upside line breaks and the rate falls below the current lowest point of this week, at 150.80, that might temporarily spook the bulls from the field. The bears may take control and drag the pair to the 150.35 obstacle, or to the 149.71 zone, marked by the low of Mar. 8. If the slide continues, GBP/JPY could end up testing the next support area between the 148.88 and 149.04 levels, marked by an intraday swing high of Mar. 2 and the low of Mar. 4.

Besides the BoE monetary policy decision, we only get the US for last week and expectations are for a small slide, to 700k from 712k.

During the Asian session Friday, apart from the BoJ decision, we also have Japan’s National CPIs for February. While no forecast was available for the rate as of this writing, the one is anticipated to have risen somewhat, to -0.4% yoy from -0.6%.

We also have two speakers on today’s agenda and those are ECB Vice President Luis de and ECB Executive Board member Isabel .