Major equity indices were a sea of green yesterday and today in Asia, as Fed Chair Powell reiterated his dovish stance, adding that it may take more than three years for inflation to reach the Fed’s goals. His remarks suggest that monetary policy is likely to stay extra-accommodative for longer than assumed and adds more credence to our view for a supported market appetite.

Equities Rebound As Powell Pushes Back On Inflation Concerns

The traded lower against the majority of the other G10 currencies on Wednesday and during the Asian session Thursday. It lost the most ground versus , , , and in that order, while it gained only against JPY. The greenback was found virtually unchanged versus and . 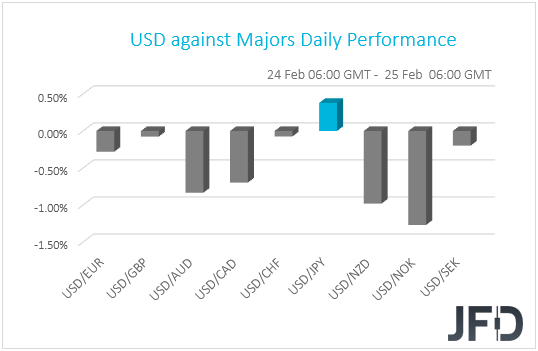 The weakness in the safe-havens and franc, combined with the strengthening of the commodity-linked currencies Aussie, Kiwi and Loonie, suggests that markets turned risk-on yesterday and today in Asia. Indeed, turning our gaze to the equity world, we see that major EU indices were a sea of green, with investors’ risk appetite rolling over, and even strengthening, during the US and Asian sessions. 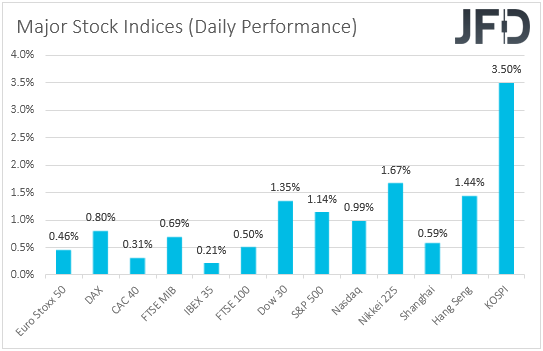 It seems that EU indices rebounded and traded in the green after data showed that Germany’s economy 0.3% qoq, instead of +0.1% as the initial estimate suggested. The boost during the US and Asian session may have been the result of Fed Chair Powell’s before the House Financial Services Committee. The Fed Chief reiterated his dovish stance, adding that it may take more than three years for inflation to reach the Fed’s goals, and that they will look beyond any temporary spike in prices. This is inline with the of the latest FOMC meeting, in which it was noted that inflation was projected to overshoot 2% for some time in the years beyond 2023, and that any move above 2% beforehand is likely to prove to be temporary.

Powell’s remarks suggest that monetary policy is likely to stay extra-accommodative for longer than many market participants have been expecting, and adds more credence to our view for a supported market appetite. We stick to our guns that the retreat, due to rising bond yield and inflation concerns, may have been just a corrective phase. We still believe that the extra-loose monetary policy around the globe, the progress in the COVID-vaccination race, and a large fiscal package in the US, are a blend of developments that could prove supportive for the broader investor morale.

This means that equities may continue to trend north, while safe havens, like the yen and the franc, may stay under selling interest. Other risk-linked assets, like the commodity-linked currencies Aussie, Kiwi and Loonie may benefit as well, with the Kiwi receiving extra support from the RBNZ’s projection of higher interest rates in December. As for the US dollar, Powell’s dovish remarks are likely to keep it pressured for a while more.

On Tuesday, after finding support near the 3643 hurdle, reversed back to the upside and is now trading above a short-term tentative upside support line drawn from the low Feb. 23. In addition to that, the index is back above all of its EMAs on our 4-hour chart, which might also strengthen the bullish case. The RSI and the MACD started showing positive momentum again, which also supports the upside idea. That said, given that the price is currently finding strong resistance near the 3720 barrier, marked by the high of Feb. 19, we would need to see a break of that barrier first, before getting comfortable with further advances.

If, eventually, the index breaks above that 3720 hurdle, this will confirm a forthcoming higher high, possibly clearing the way to some higher areas. Euro STOXX 50 might end up traveling towards the current highest point of February, at 3742, which could temporarily halt the upmove.

However, if the price continues to trade somewhere above the aforementioned upside line, new buyers could step in and lift the index higher, potentially even overcoming the 3742 zone. If so, the next potential target might be at 3776, marked by the low of Feb. 21.

If the previously-discussed upside line breaks and the price falls below the 3681 hurdle, marked by yesterday’s intraday swing low, that may open the door for lower areas. Some buyers may get spooked and Euro STOXX 50 could slide to the 3643 zone, which is the current lowest point of this week. However, if that area is unable to withstand the bear pressure, its break might set the stage for a possible test of the 3624 level, marked by the low of Feb. 10.

continues to trend higher, while balancing above a short-term tentative upside support line taken from the low of Feb. 18. But after yesterday’s steep upmove, the pair is correcting slightly lower this morning. Even if the rate does drift a bit lower, as long as it remains above that upside line, we will stay positive with the near-term outlook.

As mentioned above, the pair could go for a larger retracement to the downside, where it may end up testing the aforementioned upside line. If the bears are not ready to bring NZD/USD below that line, the bulls could be more than happy to jump back into the driver’s seat and push the rate north again. In that scenario, the pair might be able to overcome the 0.7454 barrier this time, this way confirming a forthcoming higher high and aiming for the 0.7524 level, marked by the highest point of August 2017.

Alternatively, if the previously-mentioned upside line breaks and the rate falls below the 0.7364 hurdle, marked by an intraday swing low of Feb. 24, that could spook the bulls from the field temporarily, allowing more bears to join in. NZD/USD could drift to the low of Feb. 23, at 0.7307, where it could stall for a bit. However, if the sellers are still feeling more comfortable, they may continue applying pressure on the pair. That’s when we will aim for the 0.7280 hurdle, or the 0.7268 level, marked by the low of Feb. 22 and the high of Feb. 16 respectively.

Thursday’s agenda is relatively light. We only get the 2nd estimate of the US for Q4, the durable goods orders for January, the pending home sales for the same month, and the claims for last week. The 2nd GDP estimate is forecast to reveal a minor revision to 4.1% qoq SAAR from 4.0%, while durable goods orders are expected to have accelerated to +1.1% mom from +0.5%. However, the core rate is anticipated to have declined to +0.7% mom from +1.1%. Pending home sales are expected to have slid 0.1% mom after declining 0.3% in December, while initial jobless claims are forecast to have declined somewhat to 838k from 861k.

Tonight, during the Asian morning Friday, Tokyo’s CPIs for February are coming out, with the rate expected to have held steady at -0.4% yoy. No forecast is currently available for the headline rate. Japan’s preliminary and for January are also due to be released. IP is forecast to have rebounded 4.0% mom after a 1.0% slide in December, while retail sales are expected to have fallen 2.6% yoy after sliding 0.2% in December.

As for the speakers, today, we will get to hear from ECB Vice President Luis de Guindos, ECB Executive Board member Philip Lane, New York Fed President John Willaims, and Atlanta Fed President Raphael Bostic. Tonight, during the Asian morning Friday, RBNZ Governor Adrian Orr will step up to the rostrum.