Most EU and US indices traded in the green yesterday, perhaps on upbeat earnings reports and the decision of several trading platforms, including Robinhood and Interactive Brokers (NASDAQ:), to restrict trading in several meme stocks, like GameStop (NYSE:), that surged this week. That said, sentiment deteriorated again today in Asia perhaps after Robinhood said that it will lift some trading restrictions today.

The traded mixed against the other G10 currencies on Thursday and during the Asian session Friday. It gained against CAD, JPY, and CHF in that order, while it underperformed versus NOK, NZD, GBP, AUD and SEK. The greenback was found virtually unchanged against EUR. 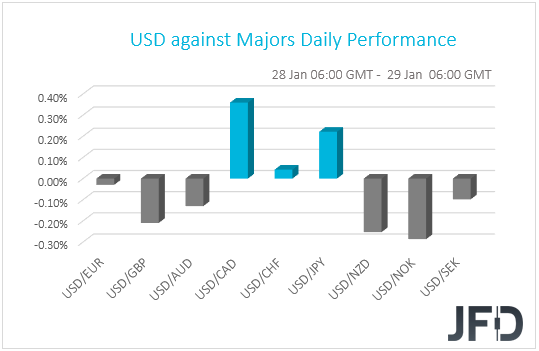 The weakening of the safe-havens and , combined with the strengthening of the risk-linked and suggests that markets turned risk on again yesterday. Indeed, major EU and US indices rebounded and closed in positive territory, with the only exception being UK’s , which slid 0.63%, perhaps due to a strengthening . However, sentiment deteriorated again during the Asian session today, with Japan’s and China’s falling 1.89% and 0.63% respectively. 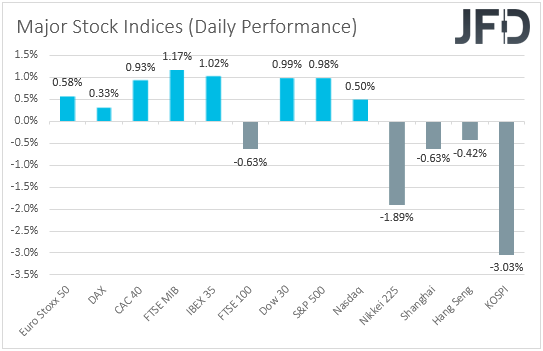 The rebound in investors’ appetite during the EU and US sessions may have been the result of upbeat earnings reports and the decision of several trading platforms, including Robinhood and Interactive Brokers, to restrict trading in several meme stocks, like GameStop, that surged this week. This may have allowed hedge funds that were short on these stocks to reopen long positions in other stocks. With regards to the earnings, of the 159 firms in the that reported earnings so far, 83% posted results that beat market expectations, a higher percentage than the 76% beat rate over the past four quarters. Having said all that though, Asian indices and other equity futures turned south again this morning, perhaps after Robinhood said that it will lift some trading restrictions today.

As for our view, the latest developments barely changed it. As we noted yesterday, we still believe that the bigger picture of equities remains positive. Even if the retreat we saw today in Asia continues for a while more, we would treat it as part of a corrective phase. We repeat that the GameStop phenomenon will likely prove to be temporary, while the covid vaccinations around the globe, although at a slower-than-expected pace, may eventually allow lockdown measures to be lifted and thereby let the global economy to recover. The extra-loose monetary policy worldwide, and a large fiscal spending package in the US may also help market sentiment to improve. This means that equites could rebound again soon, while safe-havens, like the yen, are likely to stay under selling interest, especially against currencies which we expect to perform well in a risk-on trade, the likes of Aussie and Kiwi.

Looking at the technical picture of on our daily chart, we can see that the index is currently stuck between short-term tentative lines, a downside one taken from the high of Jan. 8 and an upside one drawn from the low of Nov. 10. Given this week’s negativity in the equity world, DAX may continue sliding a bit further, however, if it rebounds from that upside line, this could lead the index back up again.

As mentioned above, this week’s weakness could force the index to slide a bit further. However, if the price finds good support near the previously-mentioned upside line, it might rebound back up. Then, more bulls may jump in and help push DAX back to the 13597 obstacle, or to the 13795 zone, marked by inside swing lows of January 11th, 19th and 20th. Slightly above it runs the previously-discussed downside line, which could halt that upmove.

Alternatively, if the aforementioned upside line fails to hold, DAX might drift even lower, as more sellers may join in. The downside scenario could strengthen if the price falls below the 13045 zone, marked by the low of Dec. 21. That way we might start aiming for the 12927 hurdle, or for the 12719 area, marked by the high of Oct. 23. If the selling doesn’t stop there, the next possible target could be at 12594, which is near the highs of Nov. 5 and 6.

continues to balance above a short-term tentative upside support line taken from the low of Dec. 21. Yesterday, we saw the pair reversing higher from the area near that upside line and making its way closer to the current high of this week, at 75.12. If the rate remains above all of its EMAs on our 4-hour chart, we will aim for slightly higher areas, at least for now.

If the pair continues to trade above all of its EMAs, it may get picked up by more bulls, what could help lift the rate again. NZD/JPY might travel back to the current highest point of this week, at 75.12, a break of which would confirm a forthcoming higher high and potentially open the door for further advances. The pair could then end up traveling to the 75.57 level, which is the current highest point of January.

In order to aim for lower areas, we would need to see a break of the aforementioned upside line and a rate-drop below the current lowest point of this week, at 74.12. This way, the pair would also be placed below all of its EMAs, increasing its chances of drifting further south. NZD/JPY may travel to the 73.82 obstacle, marked by the low of Jan. 19, which might provide a temporary hold-up. That said, if the bears see that obstacle only as a temporary pit-stop, a break of that area could lead the rate to the 73.65 hurdle, or to the 73.52 level, marked by the lows of Jan. 18 and Dec. 28 respectively.

During the European morning, Germany’s preliminary GDP for Q4 is coming out and although no forecast is available for the qoq rate, the yoy one is anticipated to have risen somewhat, to -3.4% from-3.9%. In any case, bearing in mind that we already have the and surveys for January out, as well as the preliminary PMIs for the month, we doubt that the GDP data for the last three months of 2020 will prove a major market mover. Given that investors have already an idea of how the German economy has entered the new year, they may treat the GDP data as outdated.

Later in the day, we get Canada’s monthly for November, while from the US, we have personal income, personal spending, the core PCE index, all for December, and the preliminary UoM consumer sentiment index for January. The Canadian economy is expected to have grown 0.4% mom, the same pace as in October, while in the US, the core PCE index is forecast to have ticked down to +1.3% yoy from +1.4%. Personal income is anticipated to have rebounded 0.1% mom from -1.1%, while personal spending is expected to have slid 0.4% mom, the same pace as in November. As for the preliminary UoM consumer sentiment index, it is expected to have held steady at 79.2.

We also have one speaker on the schedule and this is Dallas Fed President Robert .