EU shares gained somewhat yesterday as Eurozone’s preliminary s showed a return into expansion. That said, appetite softened during the US session, with losing the most among Wall Street’s main indices. In the energy market, prices edged north yesterday, after a ship ran aground in the Suez Canal, raising concerns that the incident could tie up crude shipments.

The traded mixed against the other G10 currencies on Wednesday and during the Asian session Thursday. It gained against , and slightly versus and , while it underperformed against and . The greenback was found virtually unchanged versus , , and . 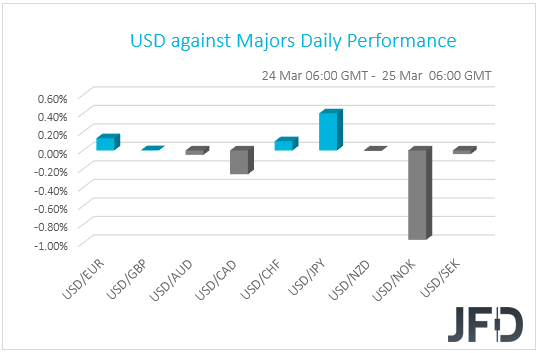 Despite the relative weakness of the safe-havens yen and franc, the failure of the risk-linked and to capitalize against their US counterpart paints a blurry picture with regard to the broader market sentiment. Yes, the oil-linked and were the gainers, but that was due to an individual story related to oil. In order to get a clearer picture with regards to risk appetite, we prefer to turn our gaze to the equity world.

There, most major EU indices closed slightly in the green, perhaps as Eurozone’s preliminary PMIs showed a return into expansion during the month of March. That said, appetite softened during the US session, with NASDAQ losing the most among Wall Street’s main indices. Sentiment improved again somewhat during the Asian session today. Although China’s and Hong Kong’s slid fractionally, Japan’s and South Korea’s gained 1.14% and 0.40% respectively. 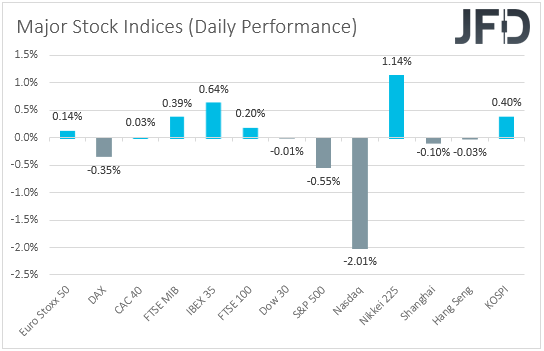 In our view, the rise of Eurozone’s composite PMI above the boom-or-bust zone of 50 is unlikely to keep European equities supported for long. We believe that the third wave of coronavirus infections across the continent, the fresh lockdowns, and a slow vaccination process are likely to result in downside revisions in the final numbers, and perhaps softer prints for the month of April. In the US, Powell and Yellen reiterated their optimism over an economic recovery before the House Financial Services Committee, but that failed to provide any support to Wall Street, as, it seems, investors remained worried due to Yellen’s remarks on Tuesday over tax increases in order to finance the new public investments.

With all that in mind, we stick to our guns that fears of a slower economic recovery in Europe, and concerns over tax increases in the US, may keep risk appetite subdued for longer than we have previously assumed. That said, we still believe that this is a corrective phase. With most major central banks pledged to keep their respective monetary policies extra loose, and projecting that any inflation spikes in the months to come are likely to prove to be temporary, we do see the case for the prevailing uptrends in equities to resume at some point in the foreseeable future.

Now moving to the energy market, oil prices edged north yesterday, after a ship ran aground in the Suez Canal, raising concerns that the incident could tie up crude shipments. That said, we see this as a temporary supportive factor for oil prices and we believe that growing concerns about global demand, due to rising covid cases, may result in another round of selling. Thus, we see the case for oil prices to continue correcting south for a while more. Nonetheless, we don’t expect the current correction to last for long as the persistent demand concerns may increase the chances for OPEC and its allies to roll over their current supply curbs into May. This, and a potential improvement in market sentiment in the foreseeable future, may bring an end to the corrective phase in oil prices.

traded lower yesterday falling below the 13000 barrier, and hit support at 12765. Overall, the index has been trading in a trendless mode since Mar. 9, between the 12700 support area and the resistance of 13300, and thus, we will adopt a neutral stance for now.

In order to start examining the case of more declines, we would like to see the index falling below the lower end of the aforementioned range, at 12700. This may encourage the bears to push the action towards the 12520 territory, marked as a support by an intraday swing low formed on Mar. 4, the break of which may see scope for extensions towards the low of Mar. 8, at 12290.

On the upside, we would like to see a break above 13300, the upper bound of the range, before we start assuming that the bulls have gained the upper hand. We could then see advances towards the 13465 hurdle, defined as a resistance by the inside swing low of Feb.18, where another break may pave the way towards the peak of the day after, at around 13730.

rebounded strongly yesterday, after hitting the 60.40 support marked by the low of Feb. 12. However, the recovery was not enough to reach the key resistance of 65.15. What’s more, the price remains below the prior upside support line drawn from the low of Nov. 2, which suggests that another round of selling may be possible soon.

If the bears reenter the action sometime soon, we would expect them to push the battle down again, for another test near the 60.40 zone. A break lower would confirm a forthcoming lower lo and may initially aim for the low of Feb. 5, at 59.20, the break of which may carry extensions towards the 57.45 obstacle, defined as a support by the inside swing high of Jan. 13.

In order to start examining whether the outlook has turned back to  positive, we would like to see the black liquid returning back above the aforementioned upside line and the key resistance of 67.00. This may initially allow advances towards the peak of Mar. 17, at 69.15, or the 70.30 zone, which prevented the price from drifting higher between Mar. 11 and 15. If the latter zone is not able to stop the bulls either, then we may experience extensions towards the high of Mar. 8, at 71.85.

During the European morning, we have a central bank deciding on monetary policy and this is the . The last gathering of this Bank was back in December, which resulted in no fireworks. The Bank kept its policy unchanged, reiterating that the Swiss franc remains highly valued and that they are willing to intervene more strongly in the FX market. Given the latest surge in bond yields around the world, we don’t believe that the SNB will risk sounding less dovish, as this may result in a stronger franc, something that they don’t want to. Thus, we expect policymakers to keep policy steady and maintain their willingness to intervene when deemed necessary.

Later in the day, we have the final US for Q4, which is just expected to confirm its second estimate of +4.1% qoq SAAR.

We will also get to hear from ECB President Christine Lagarde, BoE Governor Andrew Bailey, and BoC Governor Tiff Macklem, who will speak at a four-day conference, which is organized by the Bank for International Settlements. Although the topic will be on innovation in the digital age, we believe that, once again, market participants may be on the lookout for comments on the surging yields. That said, the only official we expect to sound worried on the matter is ECB President Lagarde.

The BoE and the BoC share the relaxed views of the Fed on the matter. Thus, following the ECB’s decision to accelerate its Pandemic Emergency Purchase Program at its latest gathering, most of the attention may fall on Lagarde for any hints with regards to whether she and her colleagues are considering more action in order to stop any unwarranted rise in debt financing costs.