US and Asian Equities traded in negative waters as the optimism around a coronavirus-aid package in the US has faded. The US Congress approved a stopgap government funding bill to prevent a government shutdown this week, but they were unable to find common ground over a COVID-relief package. As for today, the main event is likely to be the ECB monetary , with the Bank nearly certain to unleash more stimulus. The big question is how large this additional action will be.

The traded higher against all but two of the other G10 currencies on Wednesday and during the Asian session Thursday. It gained the most versus NOK, NZD, SEK, and JPY in that order, while it underperformed only against AUD. The greenback was found virtually unchanged against CAD. 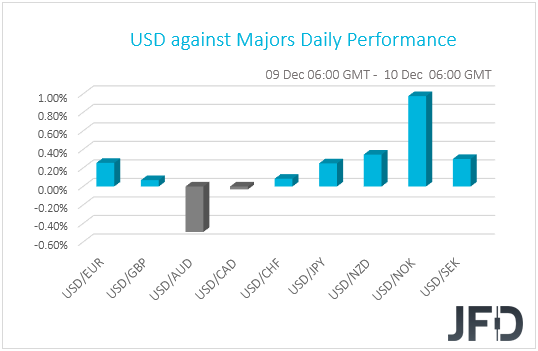 The strengthening of the US dollar and the weakening of the suggest that markets turned risk-off at some point yesterday. However, the strengthening of the and the weakening of the point otherwise. Thus, in order to get a clearer picture with regards to the broader market sentiment, we prefer to turn our gaze to the equity world. There, major EU indices were mixed, but in the US, all of the three major ones closed in negative waters, with falling the most (-1.19%). The soft appetite rolled somewhat over into the Asian session today as well. Although China’s was found virtually unchanged, Japan’s , Hong Kong’s , and South Korea’s slid 0.23%, 0.57%, and 0.33% respectively. 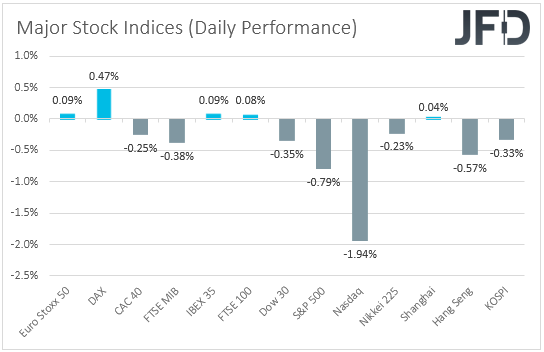 It seems that the optimism around a coronavirus-aid package in the US has faded, with US Senate Majority Leader Mitch McConnell saying that lawmakers were still looking for a path towards an agreement. Overnight, the US Congress approved a stopgap government funding bill to prevent a government shutdown this week, but they were unable to find common ground over a COVID-relief package.

Now it remains to be seen whether they can indeed agree on that before year-end. Nonetheless, the key question is not when they will agree, but how large the package will eventually be. Last week, a USD 908bn bipartisan plan gained momentum in the Congress, but with McConnell pushing to keep relief spending near USD 500bn, the package could still fall short of expectations.

In any case, this has not changed our view. Yes, the disappointment may allow for some further correction in equities, but eventually, the vaccine prospects, combined with a Biden Presidency in the US, may result in a rebound and a continuation of the prevailing uptrend. In the currency world, this means higher risk-linked currencies, like the Aussie and the Kiwi, and lower safe havens, the likes of the US dollar and the Japanese yen.

Speaking about currencies, the slid overnight, after UK PM Boris Johnson and EU Commission President Ursula von der Leyen failed to reach consensus and just agreed to continue negotiations until the end of the weekend. This means that there will be no deal presented in the EU summit starting today. With the clock ticking towards Dec. 31, the deadline for sealing a deal over trade, anything suggesting that the two sides are still finding it hard to bridge their differences could push the pound lower. For the pound to rebound strongly, headlines pointing towards consensus are needed.

The index continues to trade inside a rising wedge pattern, which has been dragging from around mid-November. After yesterday’s rejection near the upper bound of that formation, the price corrected lower and is now trading below its 21-day EMA. This might be seen as a bearish indication, however, if the boundaries of the wedge remain intact, the bulls could jump back into the game somewhere near the lower side of that pattern.

For now, we will consider a bit more downside in the near term, especially if the index continues to move below that 21-day EMA. A drop below yesterday’s low, at 29952, will confirm a forthcoming lower low, potentially opening the door for further declines. That’s when we will aim for the low of Dec. 8, at 29862, or for the low of Dec. 3, at 29770. Around there, DJIA may end up testing the lower side of the aforementioned wedge, which if stays intact, could invite the buyers back into the game. If so, the index might shoot back up again, possibly making its way to the 30210 zone, marked by the highest point of November and by an intraday swing low of yesterday. If the buying doesn’t stop there, the next potential target may be the all-time high, at 30312, or the upper bound of the wedge.

Alternatively, if the lower side of the previously-discussed formation breaks and the price falls below the 29605 area, marked by the current lowest point of December, that could increase Dow’s chances of drifting further south, as some bulls might start fleeing the field. The index may slide to the 29460 hurdle, marked by the low of Nov. 30, where it could find a temporary hold-up. That said, if the selling doesn’t stop there, the next possible aim might be at 29168, which is the low of Nov. 22.

Yesterday, we also had a BoC . The Bank kept its interest rates and QE purchases unchanged, noting that the rebound in the global and Canadian economies has unfolded largely as the Bank anticipated in its October Monetary Policy Report. Officials acknowledged that the positive vaccine news is providing some reassurance, but added that the pace and breadth of the global rollout of vaccinations remain uncertain.

They also said that economic momentum heading into Q4 appears to be stronger than expected in October, but, in recent weeks, the re-imposition of restrictions can be expected to weigh on growth in Q1 2021. In our view, this was a neutral statement, and that’s why the Canadian dollar stayed largely unphased. Moving ahead, we expect the commodity-linked currency to be mainly driven by developments surrounding the broader market sentiment, and especially movements in oil prices.

As for today, the central bank torch will be passed to the ECB. When they last met, policymakers of this Bank said that in December, the new macroeconomic projections will allow a thorough reassessment of the economic outlook and that they will recalibrate their instruments as appropriate. In other words, they hinted that they are very likely to expand their stimulative efforts at this gathering. Expectations are for a EUR 500bn expansion of their QE purchases and thus, if this is the case, the euro is unlikely to move much. 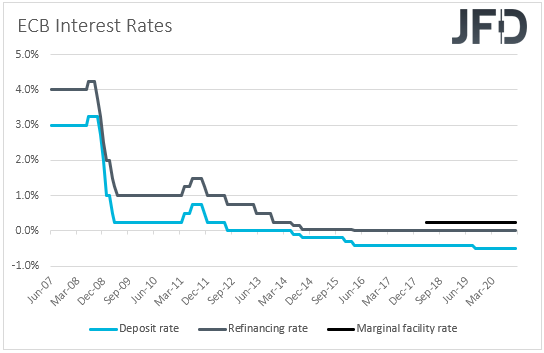 For the common currency to move higher, the Bank has to disappoint, namely to deliver less stimulus than what the market currently anticipates. That said, with the euro already well above 1.20 against its US counterpart and inflation in the bloc staying in negative waters, the last thing the ECB would like is further appreciation of its currency.

Therefore, we see more chances for policymakers to overdeliver than to underdeliver. We believe that there is decent chance for expanding QE by more than expected and also talking down the euro, either through the meeting statement, or President Lagarde’s post-decision press conference.

Yesterday, it was another big down-day for as it remained heavily in the red. The technical picture shows that the pair is still trading below its short-term tentative downside resistance line taken from the high of Dec. 7. Even if the rate climbs a bit higher, if that downside line stays intact, we will class that upmove as a temporary correction, before another possible leg of selling. For now, we will take a somewhat bearish stance.

As mentioned above, if EUR/AUD makes a move a bit higher, but remains somewhere below the aforementioned downside line, this could result in another slide, potentially bringing the rate back to the 1.6175 hurdle, marked near the current low of today. However, a further move below that hurdle would confirm a forthcoming lower low and set the stage for a possible test of 1.6145, or a touch of the 1.6122 level, marked by the lowest point of November.

On the other hand, if the aforementioned downside line breaks and the rate rises above the 1.6281 barrier, marked by the low of Dec. 7, that may spook the bears from the field temporarily, potentially clearing the way to some higher areas. That’s when we will target the 1.6306 obstacle, a break of which might send the pair to the high of Dec. 8, at 1.6365, where it could stall for a bit. However, if the buyers still don’t give up, the next possible aim might be at 1.6400, which is the high of Dec. 7.

During the early European morning, we already got the UK’s monthly GDP for October, alongside the and production rates for the month. Although the GDP slowed to +0.4% mom from +1.1%, both the IP and MP yoy rates came in better than expected. In any case, the pound barely reacted on the releases, confirming our view that GBP-traders keep their gaze mostly locked on developments surrounding Brexit.

Later in the day, the US CPIs for November are coming out. Both the and rates are expected to have ticked down to +1.1% yoy and +1.5% yoy, from +1.2% and +1.6% respectively. With the Fed noting that it will allow inflation to overshoot its 2% target for some time, so that inflation averages 2% over time, well-below-target readings may increase the chances for the Fed to expand its stimulus efforts at its upcoming gathering. The initial jobless claims for last week are also due to be released.