Most major global equity indices traded in the red yesterday and today in Asia, with the catalyst perhaps being fresh tensions between the US and China. In the currency world, the was the main loser among the G10s. It initially fell off the cliff on reports that the EU and the UK were still unable to find consensus over trade, but it rebounded thereafter, following reports that leaders will meet in Brussels in a last-ditch attempt to solve their differences.

The traded within a ±0.20% range against the majority of the other G10 currencies on Monday and during the Asian session Tuesday. It only lost more against NOK and SEK, while it only gained more versus GBP. 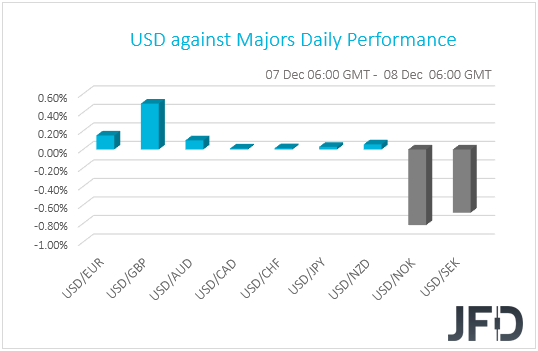 The range-bound trading in most currency pairs does not give us any clue with regards to the broader market sentiment, thus, in order to get a clear picture on that front, we prefer to turn our gaze to the equity world. There, most major EU and US indices closed in the red. The exceptions were UK’s and US’s , with the latter hitting a fresh record high. The negative morale rolled over into the Asian session today as well. 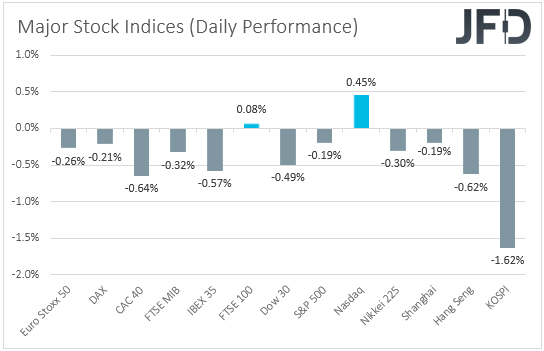 The catalyst behind the retreat in equities may have been fresh tensions between the US and China, with the world’s largest economy reportedly preparing to impose sanctions on at least a dozen Chinese officials over their alleged role in Beijing’s disqualification of elected opposition legislators in Hong Kong. The US-China relationship was the main topic concerning the markets before the coronavirus outbreak, and it seems that with latest headlines suggesting that a vaccine will be ready for distribution soon, investors turned some of their attention back to that.

That said, our own view is that with the steep recovery we saw in November, investors may be looking for reasons to lock some profits before the end of the year. We stick to our guns that the vaccine prospects, combined with a softer handling of the US-China relations by the new US President Joseph Biden, are likely to keep sentiment supported in the foreseeable future. Thus, we would treat yesterday’s slide, or any extensions of it, as a corrective phase.

Euro continues to balance above a short-term upside support line taken from the low of Nov. 9, but at the same time it struggles to overcome the 3538 resistance barrier, which is the highest point of November. Despite that, we will remain cautiously-bullish with the near-term outlook and wait for a pop above that 3538 barrier, in order to get comfortable higher areas.

If the index does move and stay above that 3538 zone, this will confirm a forthcoming higher high, possibly clearing the path to some higher resistance areas, where one of those could be at 3597. That hurdle is marked by the high of Feb. 26. That said, if the buyers see that hurdle only as a temporary obstacle on the way higher, its break might open the door for a push to the 3676 level, marked by the high of Feb. 25.

Alternatively, if the aforementioned upside line breaks and the price falls below the low of Nov. 30, at 3476, that could attract a few more sellers into the game. Euro Stoxx 50 might then drift to the 3438 zone, a break of which may set the stage for a test of the 3395 and 3380 levels. Those levels are marked by the low of Nov. 12 and an intraday swing low of Nov. 9 respectively.

In the FX world, the British pound was the main loser among the G10s. It tumbled around 185 pips against the US dollar during the early European morning on headlines and reports that EU and UK negotiators have failed to bridge significant differences in order to get closer to a trade deal.

Nonetheless, the currency rebounded, recovering a large portion of those losses, following fresh reports that leaders will meet in Brussels in a last-ditch attempt to find common ground ahead of Thursday’s EU summit. This will be the last summit of this year, and thereby, the last official chance for the two sides to seal a deal.

Thus, we expect the pound to remain sensitive to headlines and developments surrounding this landscape. Anything suggesting that the differences-gap is narrowing, is likely to prove positive for the currency, while reports pointing to more stalemates could push it lower, as this would increase the chances for a no-deal Brexit at the end of the year. Something like that would also increase speculation for the BoE adopting negative interest rates in the months to come, which is another negative for sterling.

Yesterday, took a deep dive all the way to the 1.1809 zone, where it found support. But it wasn’t long after it rebounded and recovered most of the losses made that day. Given the sharp reversal, the pair has a good chance of moving higher, however, let’s not forget that the rate is still trading below a short-term tentative downside resistance line taken from the high of Dec. 1, which could keep the bears in play. For now, we will take cautiously-bearish stance.

As mentioned above, the pair might drift a bit more to the upside, however, if the aforementioned downside line remains intact, another slide could be possible. GBP/CHF may then get pushed by the bears back to the 1.1888 hurdle, a break of which might set the stage for a move to yesterday’s low, at 1.1809. Slightly below lies another potential support area, at 1.1792, marked by the lowest point of November.

On the other hand, if the previously-mentioned downside line breaks and the rate climbs above yesterday’s high, at 1.1972, that may increase the pair’s chances of moving further up. GBP/CHF might rise to the high of Dec. 4, at 1.2037, a break of which could set the stage for a move to the 1.2085 level. That level marks the high of Dec. 2.

In Europe, we have the German for December, Eurozone’s for Q3, and the bloc’s final GDP estimate for Q3. With regards to the ZEW survey, the current conditions index is expected to have declined to -66.0 from -64.3, while the economic sentiment one is forecast to have risen to 46.0 from 39.0.

Eurozone’s employment change is forecast to show that the economy has lost 2.8% qoq jobs, after gaining 0.9% in Q2. The final GDP print is just expected to confirm its second estimate of 12.6% qoq.

With regards to the energy market, we have the API (American Petroleum Institute) on crude oil inventories for last week, but as it is always the case, no forecast is available.

As for tonight, during the Asian morning Wednesday, China’s and for November are coming out. The CPI rate is expected to have risen to +0.8% yoy from +0.5%, while the PPI one is anticipated to have inched up to -1.8% yoy from -2.1%.