Major EU and US indices fell yesterday, perhaps due to the surging coronavirus cases around the globe, and concerns that any fresh stimulus in the US may be delayed. In the currency sphere, the gained against all the other G10 currencies, receiving support from the recent spike in US Treasury yields.

The US dollar traded higher against all the other G10 currencies on Friday, Monday, and during the Asian morning Tuesday. It gained the most against , , NZD, and AUD in that order, while it eked out the least gains versus and JPY. 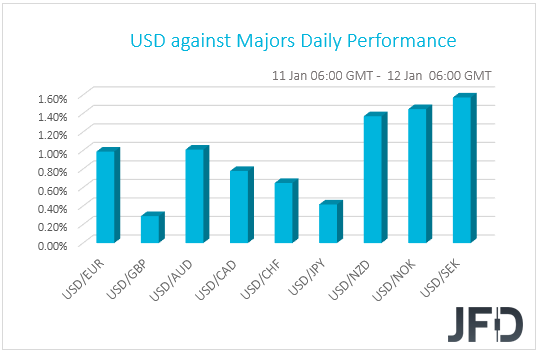 The strengthening of the US dollar and the , combined with the weakening of the risk-linked and , suggests that markets traded in a risk-off fashion. Indeed, turning our gaze to the equity world, we see that major EU and US indices were a sea of red, with the EU ones pulling back from over 10-month highs and Wall Streat retreating from record levels. 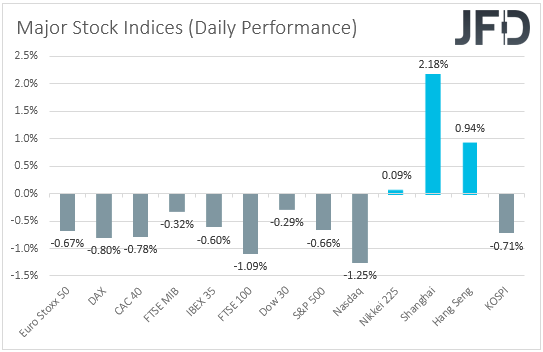 According to media reports, the slide in riskier assets may have been the result of surging coronavirus cases around the globe, which surpassed 90 million on Monday. What’s more, daily cases hit new records in the end of last week, while yesterday, China saw its biggest daily increase in infections in more than five months.

Another factor that may have weighed on the broader market sentiment may have been worries that any fresh fiscal stimulus in the US may be delayed as House Democrats introduced a resolution to impeach US President Trump, accusing him of inciting insurrection following a violent attack on the Capitol by his supporters.

As for our view, all this may have been an excuse for investors to lock profits following the latest steep rally in equities. We still believe that the vaccinations, the fiscal stimulus in the US, and the monetary-policy support around the globe are likely to continue providing support for risk-linked assets. Thus, we would treat the current retreat as a corrective move before the next leg north.

In the currency world, apart from safe-haven inflows, the US dollar may have also received support from the recent spike in US Treasury yields, with the spread between the and yields widening the most since July 2017. However, we believe that the rapidly widening “twin deficit” in the US may keep any USD recovery limited.

The explosion in the budget and trade deficits means that more dollars are being printed and moved abroad. With President-elect Joe Biden pledged to provide more fiscal stimulus, meaning that the nation’s debt will increase, the dollar is likely to remain under selling interest in the first months 2021.

Despite yesterday’s small setback, continues to balance above a short-term upside support line drawn from the low of Dec. 21. As long as that upside line stays as a good support area, we will remain positive, at least with the near-term outlook.

Although the short-term outlook is still on the positive side, in order to get a bit more comfortable with that idea, we would prefer to wait for a push above the last week’s high, at 3658. This way, the index would confirm a forthcoming higher high, resulting in possible further advances. The price might get pushed to the 3728 obstacle, or even to the 3775 level, which are marked by the high of Feb. 24 and the low of Feb. 21.

Alternatively, if the index breaks the aforementioned upside line and then falls below the 3593 hurdle, marked by yesterday’s low, that may spook the bulls from the field temporarily, allowing more bears to join in. The price could then drift to the current lowest point of January, at 3523, a break of which might clear the way to the next potential support area, at 3450. That area is marked near an intraday swing high of Dec. 21 and near the low of Dec. 22.

Yesterday, had a decent run to the upside, where it ended up testing a short-term downside resistance line taken from the high of Nov. 13. That downside line provided good resistance and helped the bears to take advantage of the higher rate, forcing the pair to move back down again. As long as USD/CAD stays below that downside line, we will continue aiming slightly lower.

This morning we are seeing USD/CAD already moving slightly below one of its support areas, at 1.2762, which is an intraday swing high from yesterday. A further slide may send the rate to the 1.2734 obstacle, a break of which might set the stage for a move somewhere to the 1.2702 level, marked by an intraday swing high of Jan. 8. Around there, the pair may also test a short-term tentative upside line, drawn from the low of Jan. 6, which could provide a temporary hold-up.

On the upside, if the rate manages to overcome the previously-discussed downside line and is able to climb above yesterday’s high, at 1.2835, that may attract more buying interest, as such a move would confirm a forthcoming higher high. USD/CAD could then travel to the 1.2875 obstacle, a break of which might clear the way to the 1.2933 level, marked by the high of Dec. 22.

The calendar appears very light today. We only get the US for November, and the API (American Petroleum Institute) report on crude oil for last week. No forecast is available for neither release.