The continued to trade south, while equities kept trending north, as bond yields retreated further. Following the soft US inflation data on Wednesday, inflation fears continued to ease on Thursday, especially after the ECB decided to accelerate its Pandemic Emergency Purchase Program in order to stop any unwarranted risen in debt financing costs.

The US dollar continued to slide against all but two of the other G10 currencies on Thursday and during the Asian session Friday. It fell the most against , , and , while it gained some ground only versus . The greenback was found virtually unchanged against . 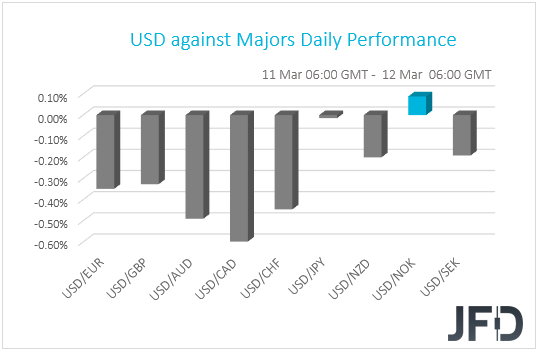 The weakening of the US dollar suggests that US Treasury yields continued their retreat, while equities may have kept marching north. Indeed, looking at the performance of major global stock indices, we see that the EU and US ones were a sea of green, with gaining the most (2.52%). The German , the and the hit fresh record highs. The positive sentiment rolled over into the Asian session today as well. The only exception was Hong Kong’s , which slid 2.00%. 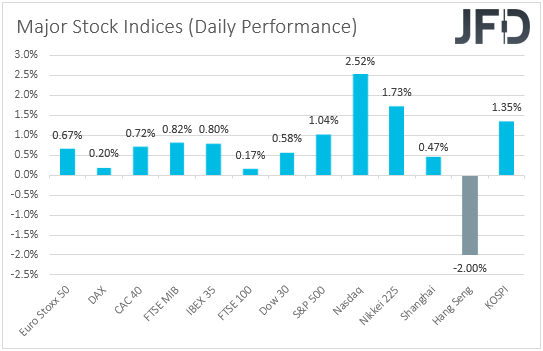 Following the soft US data on Wednesday, inflation fears continued to ease on Thursday, especially after the ECB decided to accelerate its Pandemic Emergency Purchase Program in order to stop any unwarranted risen in debt financing costs, which mostly mirrored a similar shift in US Treasuries rather than reflecting improved economic prospects across the bloc.

In any case, the euro did not fell at the time of the decision, as the Governing Council noted that PEPP quota would not necessarily be used in full if market conditions improve. With inflation fears easing, a better-than-expected print, and the signing of the USD 1.9trln relief package into law by US President Biden, may have sparked hopes that the US economy will continue to recover at a healthy pace, without the risk of overheating, and that’s why equities may have continued to trade north during the Asian session today as well.

Remember that we’ve been repeatedly saying that inflation fears could ease soon, something that would help equities to rebound and trend north again. The latest market reaction confirms our view, which was based on the Fed’s assessment that any spike in inflation in the months to come is likely to prove to be temporary

Yesterday, ECB President was on the same page, noting that Eurozone inflation may pick up mostly due to transitory factors. With the Fed noting that inflation in the US will rise and stay above 2% for some time in the years after 2023, we stick to our guns that the path of least resistance for equities may be to the upside.

Other risk-linked assets, like the and the are likely to strengthen as well, while the US dollar is likely to continue its retreat. The safe-havens yen and franc may also stay under selling interest.

reached a new all-time high yesterday, hitting the area near the 14595 hurdle. This morning, we can see that the cash index has corrected slightly lower. That said, if the price is able to stay somewhere above the 14475 zone, marked by the high of Mar. 9, that may keep the bulls interested in the near-term.

Overall, we will stay bullish.

If the price drifts a bit lower, but remains somewhere above the 14475 hurdle, this could bring new buyers back into the game, helping DAX to climb higher again. The German index might once more revisit the current all-time high level, at 14595, a break of which would confirm a forthcoming higher high. We may then aim for the psychological 15000 mark.

On the other hand, a drop below the aforementioned 14475 hurdle could also place the price below the 21-day EMA, which may spook new buyers temporarily, especially if the index also goes on falls below the 14385 zone, marked by the low of Mar. 10. DAX might then slide to the low of Mar. 9, at 14305, a break of which could clear the way for a test of the 14198 level.

That level marks the high of Mar. 3. Slightly below it runs a short-term tentative upside support line, drawn from the low of Feb. 26, which may provide additional support. If so, this whole move lower could be considered as a temporary correction, before a possible rebound.

At the time of writing, seems to be trapped between two short-term lines, a downside one taken from the high of Mar. 4 and an upside one drawn from the low of Feb. 26. This picture shows that the pair is stuck inside a triangle pattern, which makes us cautious about the next directional move. But given that the prevailing trend is to the upside, there is a chance to see a further move north. For now, we will take a cautiously-bullish approach.

If the rate breaks through the aforementioned downside resistance line and then pushes above the 1.1100 barrier, marked near yesterday’s high, that may open the gates for a further uprise. EUR/CHF could then travel to the 1.1118 obstacle, a break of which might set the stage for a test of the 1.1151 level. That level marks the current highest point of March.

Alternatively, if the pair falls below the previously-mentioned upside line and then slides below the 1.1051 hurdle, marked by yesterday’s low, that could spook new buyers from entering for a while. EUR/CHF may then drift to the current low of this week, at 1.1030, a break of which could clear the way to the next potential support area between the 1.0998 and 1.1003 levels. Those levels mark an intraday swing high of Feb. 26 and the low of Mar. 2.

During the early European morning, we got the UK’s monthly for January, as well as the industrial and manufacturing production numbers for the same month. The monthly GDP rate fell to -2.9% mom from +1.2%, while the IP and MP rates fell by more than expected.

That said, the did not react as weaker-than-expected prints were not actually a surprise, if we take into account that the UK has been in full lockdown during the month of January. Thus, we will stick to our view that with the vaccinations proceeding very well in the UK, and with BoE officials being aligned with the relaxed views of the Fed over the rally in bond yields around the globe, the pound may continue performing well.

As for the rest of Friday’s releases, Germany’s final for February is forecast to confirm their preliminary estimates, while Eurozone’s is anticipated to have rebounded 0.3% mom in January, after contracting 1.6% in December. From Canada, we get the for February. The is forecast to have ticked down to 9.3% from 9.4%, while the employment change is expected to show that the economy has gained 52.5k jobs after losing 212.8k in January. In the US, the preliminary UoM consumer sentiment index for March is coming out and the forecast points to an increase to 78.0 from 76.8.