The sold off yesterday from above Tuesday’s high to below its low. Yesterday was therefore an outside down bar on the daily chart. It is a sell signal bar for today. But it closed near the middle of the range instead of on the low. This is a weak sell signal bar. The E-mini is more likely to go sideways today instead of down.

The bears want a reversal down on the daily chart from the top of a 4-month bull channel. Also, the E-mini is just above the measured move target from the September/October double bottom.

However, yesterday was the 1st pullback after an 8-day bull micro channel. That means the bulls have been aggressive. The bears typically need at least a micro double top before they can get more than a 3-day pullback in a strong bull trend.

Also, traders want to see at least a couple consecutive big bear bars on the daily chart, before concluding that a 10% correction has begun. Without that, traders will continue to buy every 1- to 3-day reversal down.

The bulls want the week to have a bull bar on the weekly chart after last week’s big bull bar. That would increase the chance of higher prices next week.

But the bears want the week to close below the open, and preferably on the low of the week. This week would then be a sell signal bar on the weekly chart. It would increase the chance of lower prices next week.

It is important to note that the buy climax has gone on for several months on the daily chart. That is a long time. With the E-mini now at the top of the bull channel, there is an increased chance of a 5–10% pullback coming at any time.

Can today be a big bull day? Of, course it can. The E-mini has rallied strongly for 8 days and several of the days closed near their highs. However, the rally covered a lot of points with only small pullbacks. That increases the chance of the bulls beginning to take some profits, which reduces the chance of a big bull day.

What about a big bear day? Yesterday rallied in a bull channel. Traders should think of a bull channel as a bear flag since the breakout is usually below. So, yes, the bears can get trend resumption down from yesterday’s early selloff. But as I said, the day after a big day tends to mostly overlap that day. That increases the chance of trading range trading today and it reduces the chance of a strong trend up or down.

Also, this week’s range is small. It might stay small and close near the open tomorrow. That further reduces the chance of a big trend today. 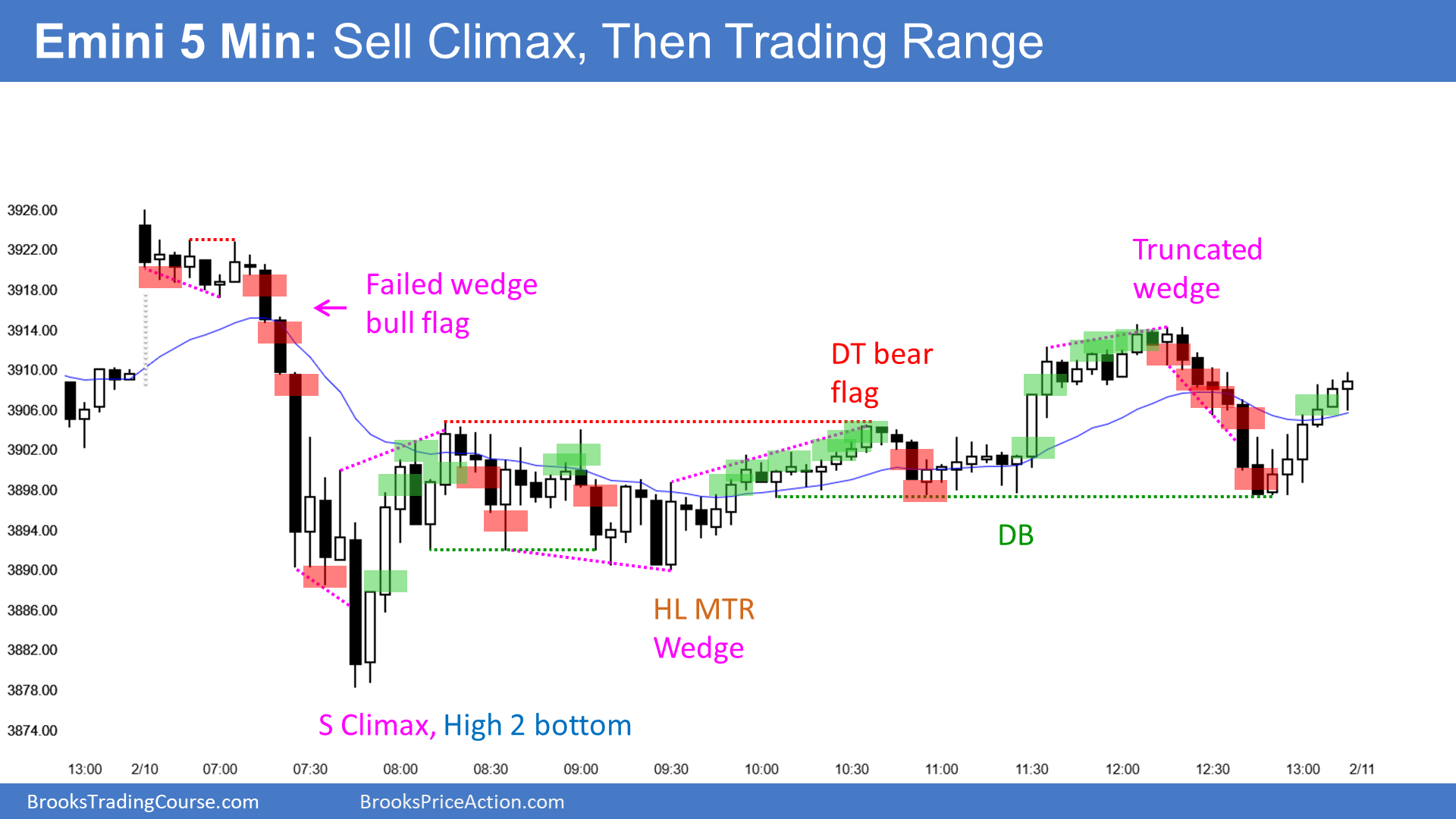 Here are several reasonable stop entry setups from yesterday. I show each buy entry with a green rectangle and each sell entry with a red rectangle. Buyers of both the Brooks Trading Course and Encyclopedia of Chart Patterns have access to a much more detailed explanation of the swing trades for each day (see Online Course/BTC Daily Setups).

My goal with these charts is to present an Always In perspective. If a trader was trying to be Always In or nearly Always In a position all day, and he was not currently in the market, these entries would be logical times for him to enter.

If the risk is too big for your account, you should wait for trades with less risk or trade an alternative market like the Micro E-mini.